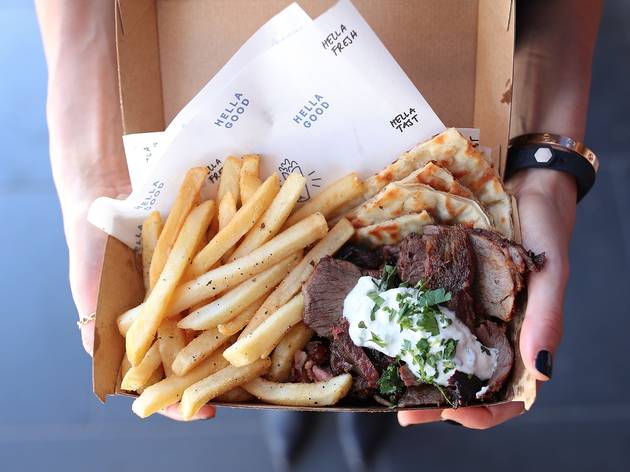 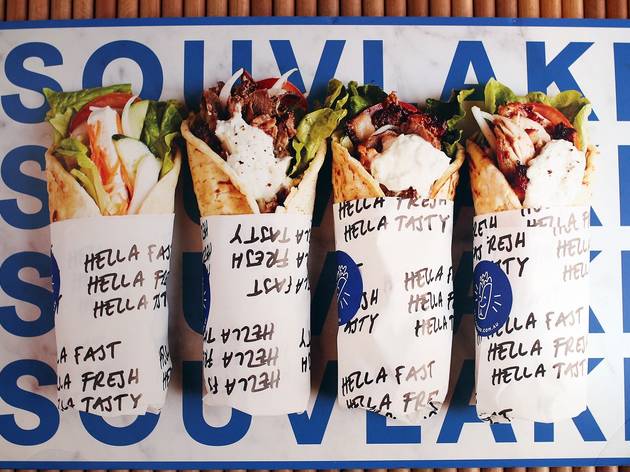 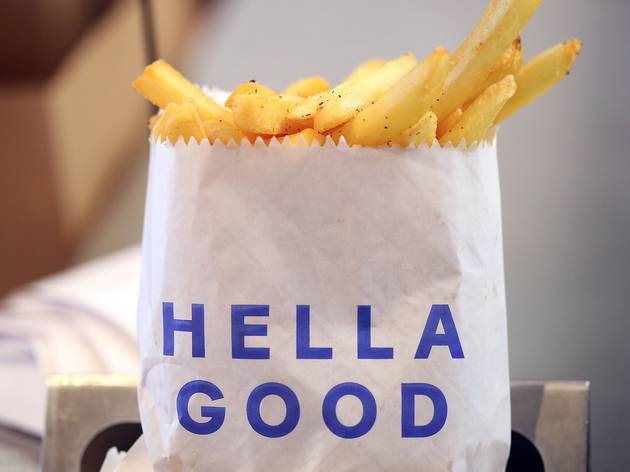 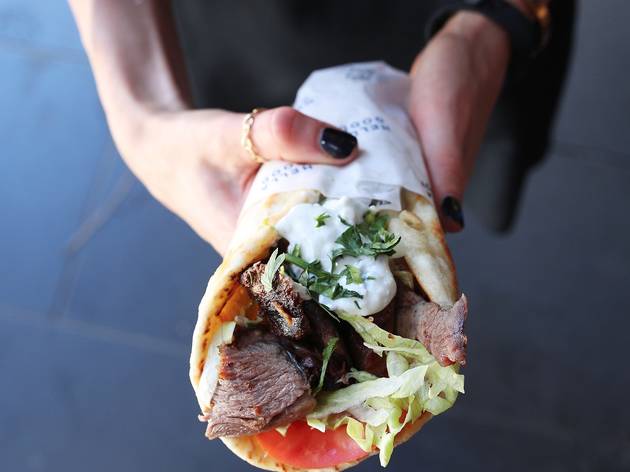 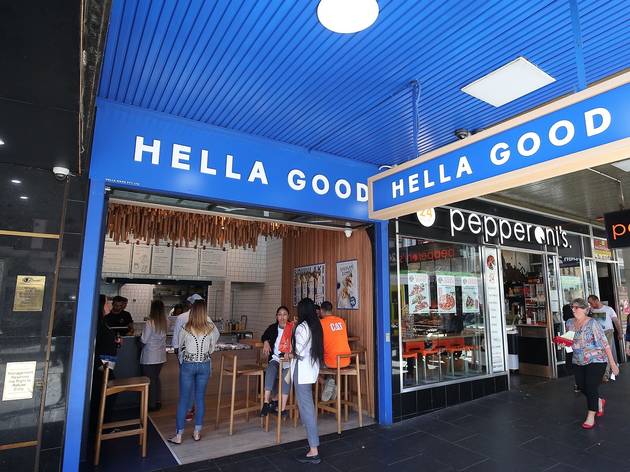 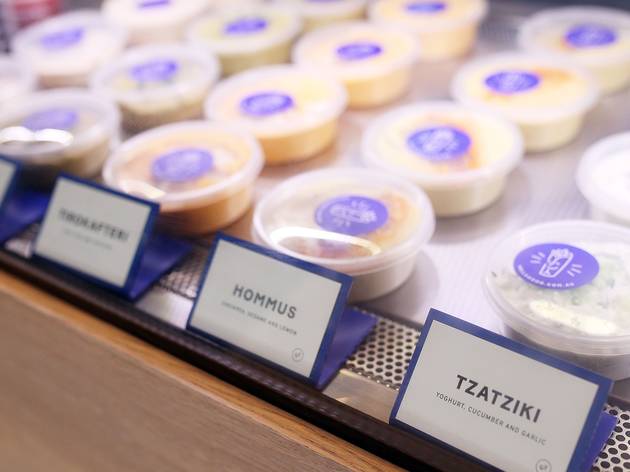 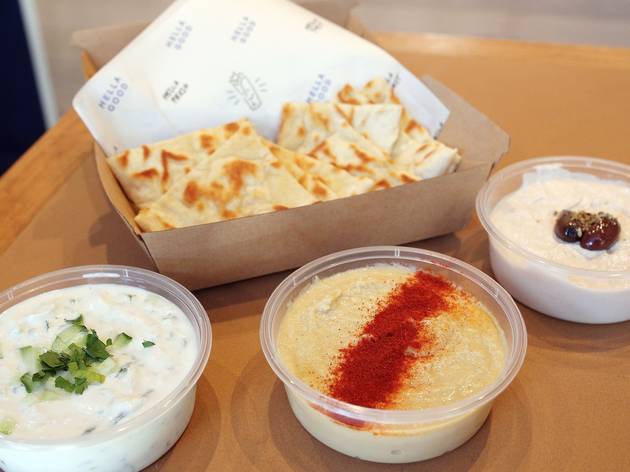 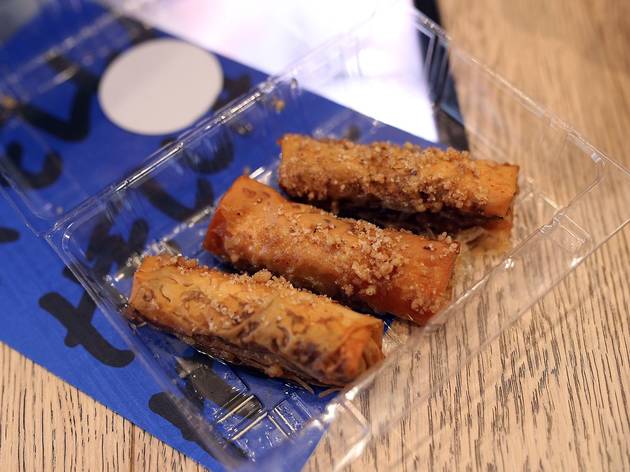 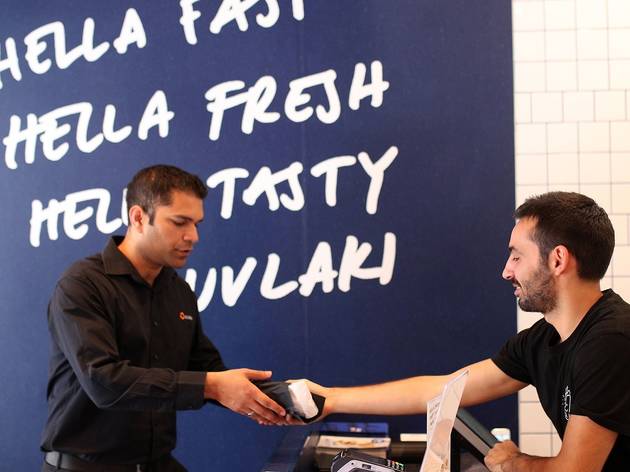 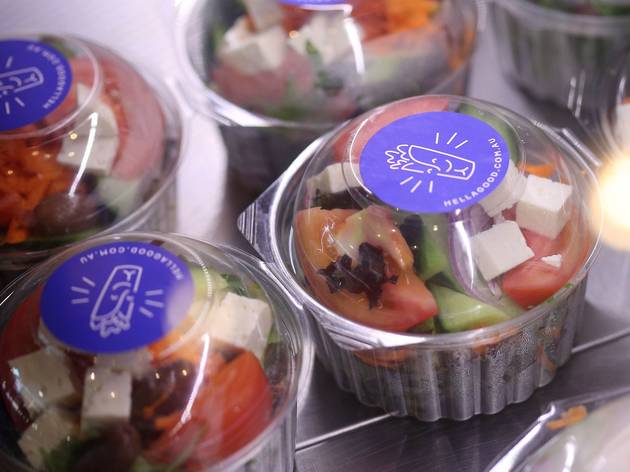 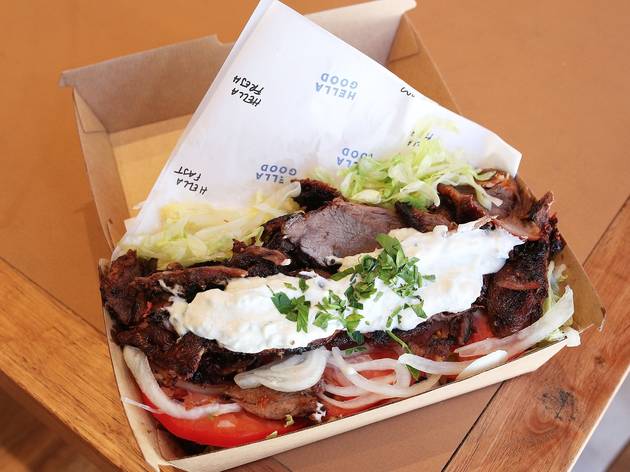 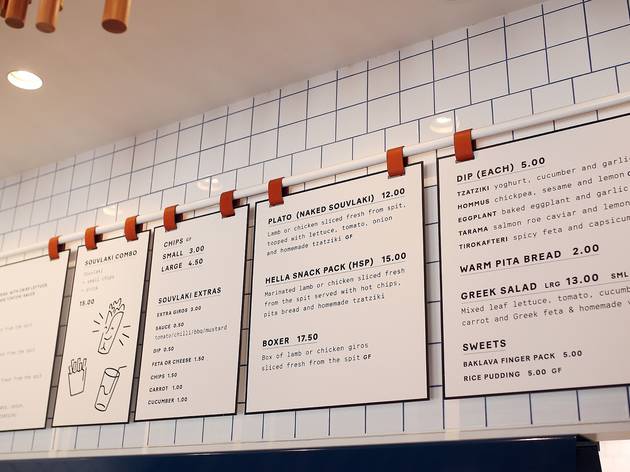 Legendary purveyors of Greek food Stalactites know a thing or two about souvlaki. And after almost 40 years in the biz and a whopping 10 million souvas sold, they’ve opened a sister venue specialising in everyone’s favourite Greek sandwich.

Located near the intersection of Elizabeth and Flinders Streets, a busy thoroughfare that’s surprisingly devoid of decent food options, and open till late, Hella Good (not a reference to the No Doubt song, ‘hella’ stands for ‘Hellenic’) is a godsend. The tiny blue-and-white space – complete with a modern version of timber stalactites hanging from the ceiling as a nod to the founding restaurant – has only six dine-in seats, with the focus on takeaway.

The menu keeps it simple: there are four types of souvas, three plates and a few ready-to-go accompaniments. Everything – from the dips (eggplant, tarama, hummus, and spicy feta and roast capsicum for a fiver each) to the desserts (baklava and rice pudding) – is made fresh daily to tried and true recipes from Stalactites. There’s a big focus on family and loyalty: meat is sourced from local farmers and they’ve had the same veggie grocer for 38 years. And their prized pitas – soft, chewy and nicely oily – are baked by a Greek family to strict requirements.

In Greece, souvlaki is an integral part of the street food scene and refers to meat, usually pork, on a skewer. Here, the souvas – with fun names like ‘Arnie’ and ‘Kotter’ from the beloved 70s program, Welcome Back, Kotter – have been Melbourne-fied. Choose from chicken or lamb (or a mix) that’s been marinated in more than 20 herbs and spices (there are whispers of oregano, paprika, cumin and cinnamon, to name a few) and cooked to succulent perfection on the spit. It’s then jammed into a warm pita and given freshness and flavour with lettuce, tomato, onion and garlicky tzatziki. Add chips – a tad floppy but with a lip-smacking seasoning of lemon, herbs and plenty of salt – and a drink, and your bill will come to a measly $15.

They also do a no-carb version (your choice of meat with all the trimmings but no pita) and a rendition of the Halal snack pack, which sees meat served with chips and pita and doused in tzatziki. Those of us who care equally about quality and quantity would be pleased to know that the portion sizes are more than generous.

Hella Good might not be reinventing the wheel, but when you come from such fine pedigree, do you really have to? They know how to do a hella tasty souvlaki and the location is spot-on. Whether after a quick lunch, a snack on the way home from work or something to soak up the alcohol after a night out, Hella Good is here to save you from a Big Mac you’ll (probably) regret.