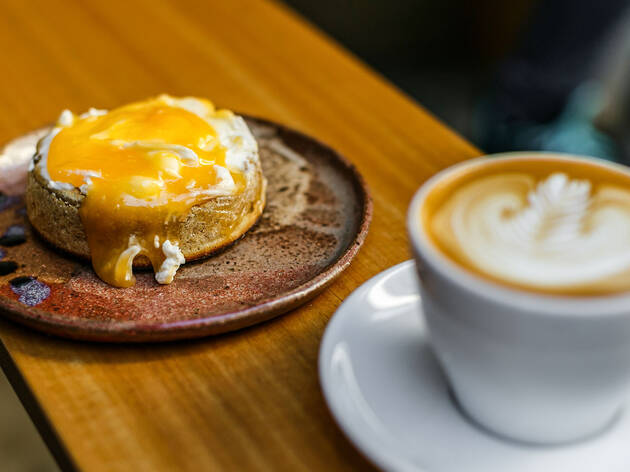 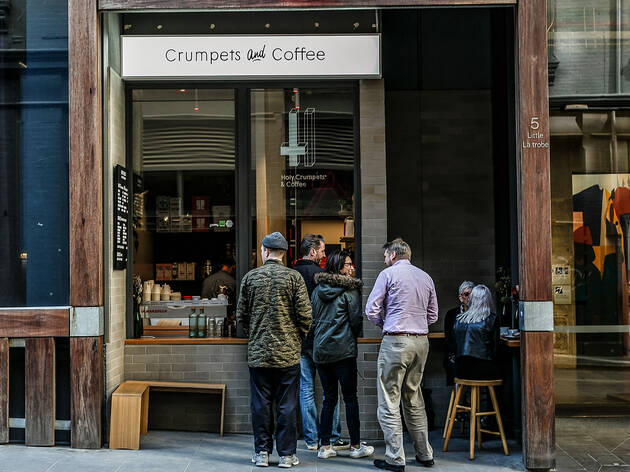 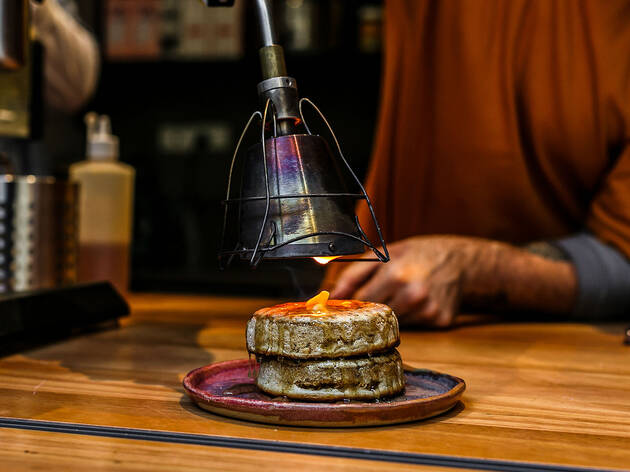 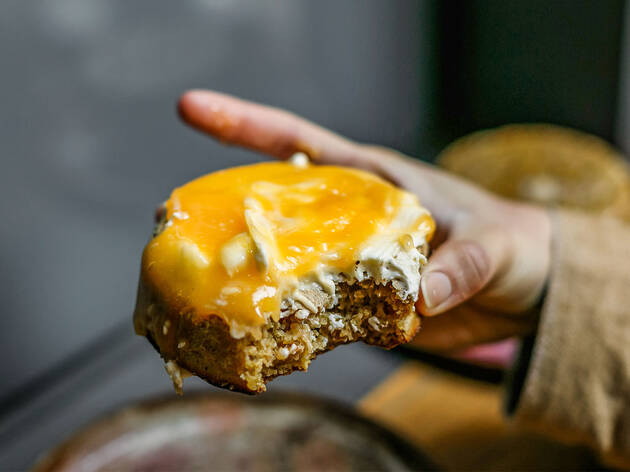 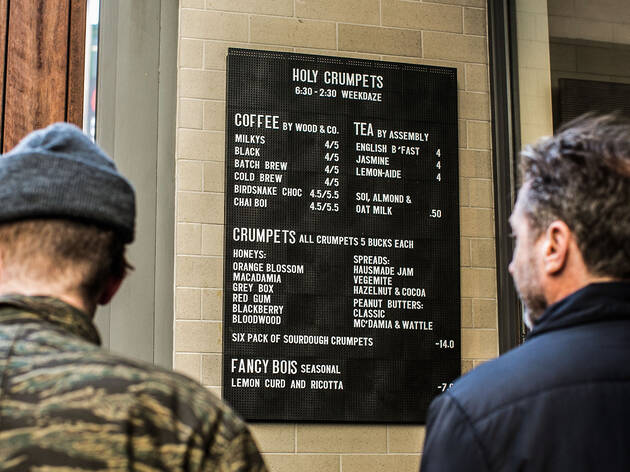 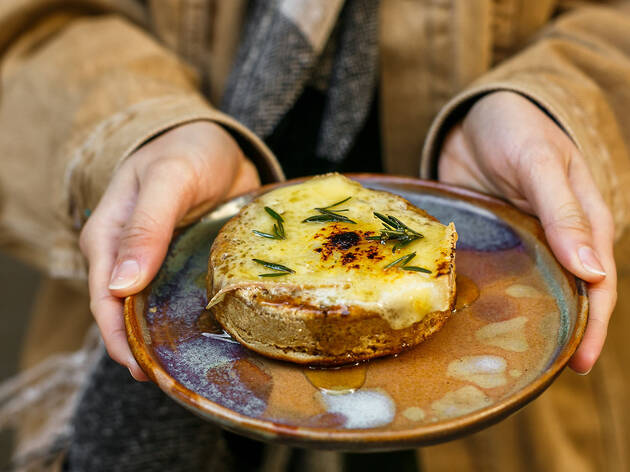 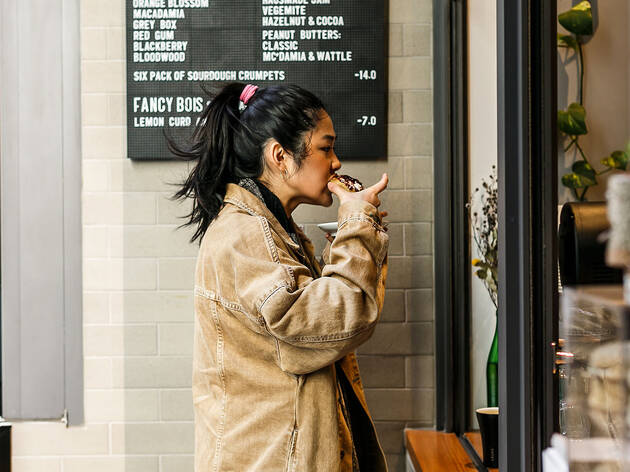 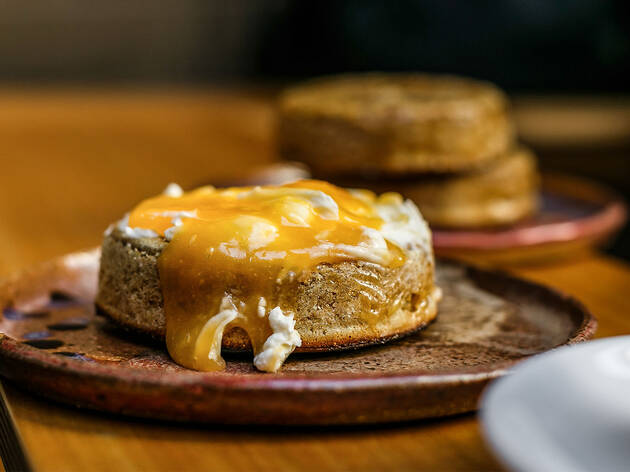 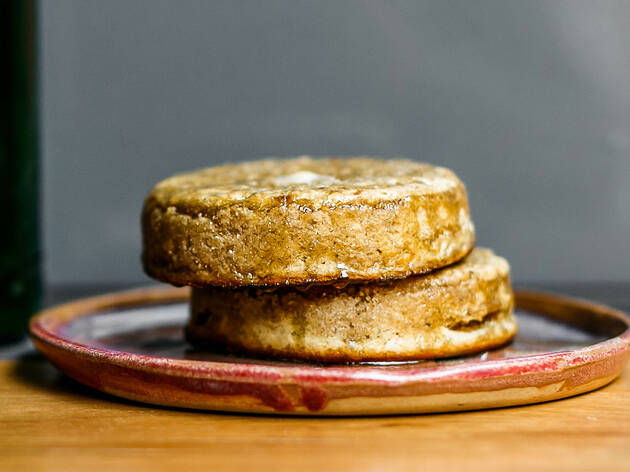 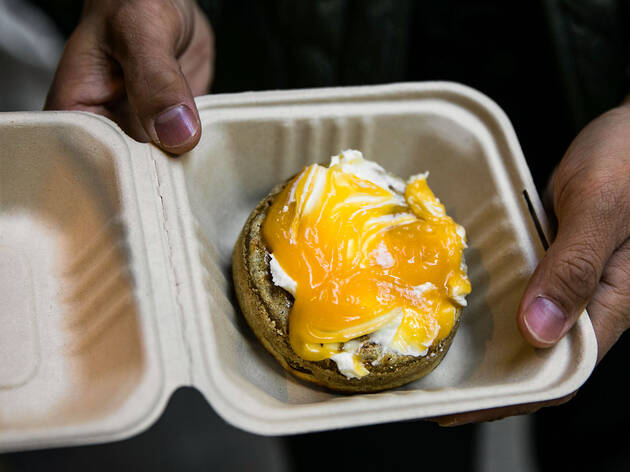 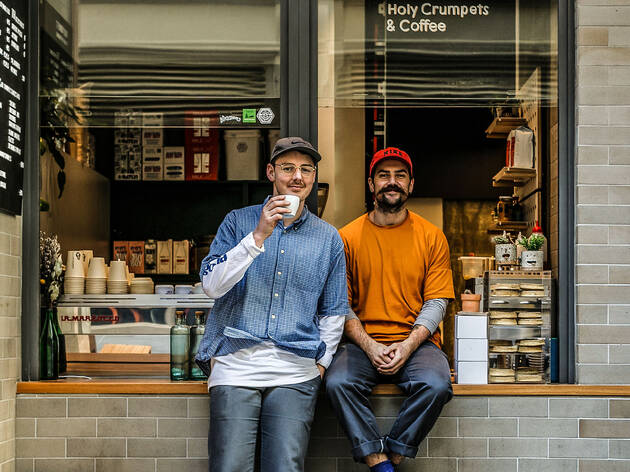 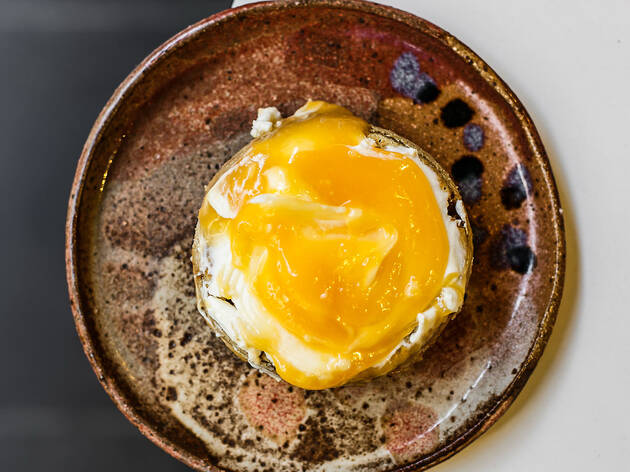 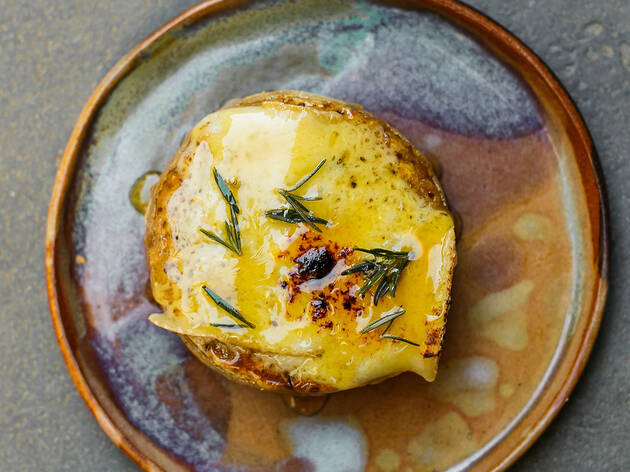 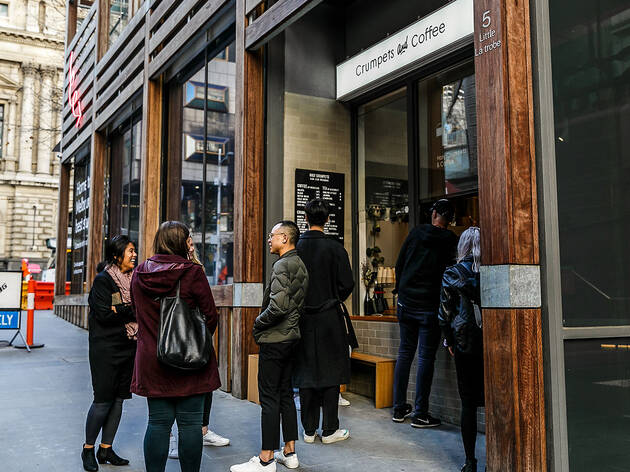 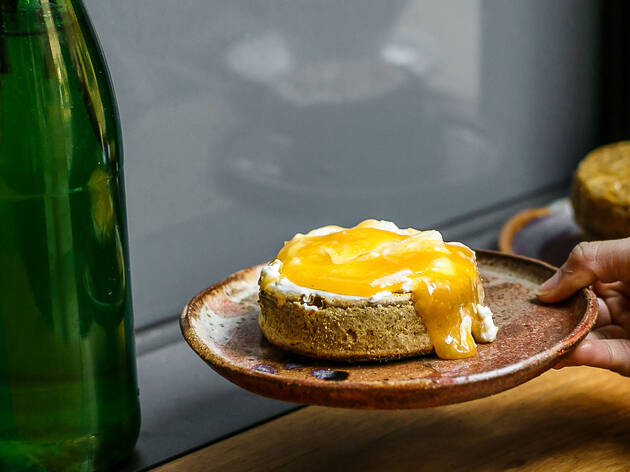 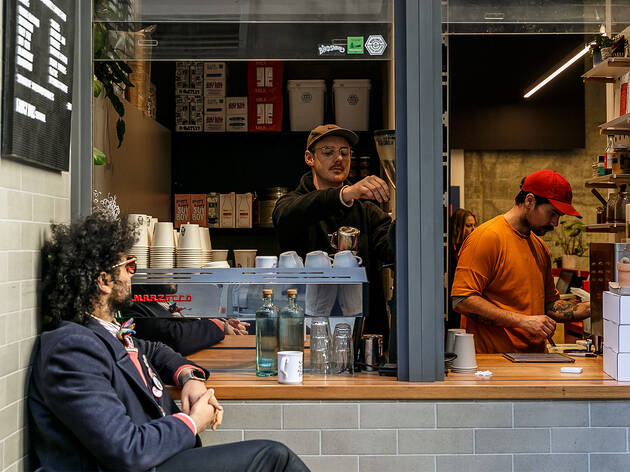 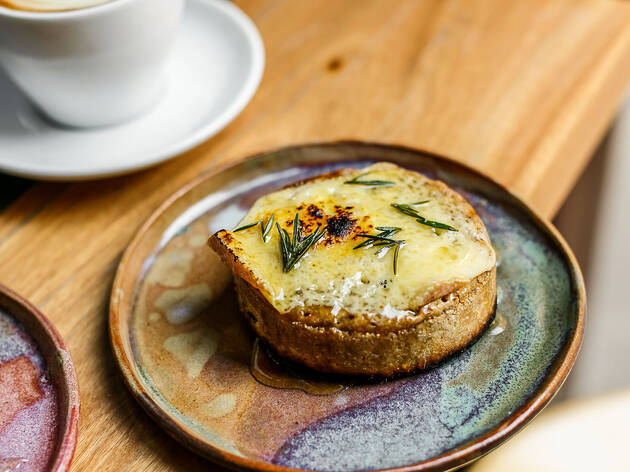 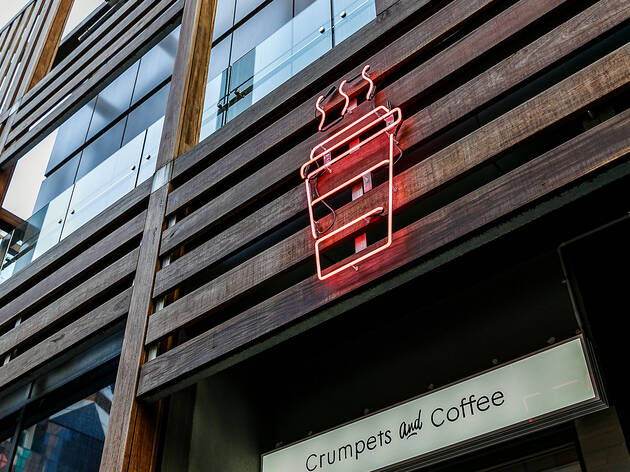 Perhaps, like us, you remember when you were a kid and the only thing that would nudge you out of bed on a Saturday morning would be the smell of crumpets toasting? Spongy, soft rounds smeared with butter and honey dripping down your fingers and face? Pure joy.

Crumpets are the stuff of childhood memories for many, but few would decide to turn it into a business. Joshua Clements’ crumpet nostalgia was stirred during a trip to the USA a number of years ago. He spent a year and half perfecting his recipe before he started selling at farmers’ markets in September 2017. His crumpets have been such a hit that in February he took the plunge to open a bricks-and-mortar shop in the CBD.

The hole-in-the-wall café is easy to find. Turn left on Little Latrobe Street from Swanston and the sign saying ‘Crumpets and Coffee’ signals you’ve arrived. It’s a tiny place with a few low benches and a L-shaped bar that sits eight to ten people max. If you can’t find a seat, don’t worry: the crumpets travel well.

So how do Josh’s holy crumpets fare compared to what we eagerly gobbled up as kids? For starters, these are much more of an adult offering: they’re made from local organic wheat that’s stone milled in Brunswick before getting turned into a mixture that’s between a batter and dough and left to ferment overnight. The crumpets are sourdough and don’t have any baker’s yeast, which they’re traditionally made with, giving them a denser texture and a subtle hint of tanginess. As a bonus, they’re healthier and better for digestion – and soak in their toppings (made from ingredients primarily sourced from artisanal producers) to a T.

Traditionalists can delve into six different honey options. Mostly Victorian, they range from the mild, citrusy Orange Blossom – giving the crumpet a sort of marmalade flavour – to the more intense Yellow Box, to the golden syrup-like Bloodwood. Plenty of cultured butter from Fitzroy’s Saint David Dairy adds richness and moreishness. Or why not try it with housemade raspberry jam or peanut butter (classic or more left-of-centre options like maple and coffee, and macadamia wattle available) – or live large by having both?

Those who prefer savoury have the option of Vegemite or can order one of two ‘fancy’ crumpets – seasonal flavours that rotate a few times a month. When we visited the savoury came with smoked butter, grilled Taleggio, honey and thyme: the pungent, brie-like cheese melted seductively over its perfect bedfellow of honey, with aromatic thyme taking off the sweet edge. The sweet ‘fancy’ crumpet with ricotta, lemon curd and fresh raspberries conjures another popular treat – raspberry cheesecake.

Coffee is from Wood & Co and tea is by Assembly – think English breakfast, Jasmine and Lemon-Aide, a lemongrass mix. There’s also hot chocolate and chai – all the usual suspects but made expertly and the perfect accompaniments to the warm, filling crumpets. You can even pick up a six-pack of plain crumpets to take home. Why it’s taken someone this long to open a dedicated crumpet café is a mystery, but we’re all the better for this cute place where devotees can worship the humble crumpet in all its glory.