Update: We attended this venue in January 2019 and some details may have altered since then.

Dateline: Lygon Street. Toto’s Pizza House is just to the south; Universal Café just to the north. We’re in the Italian heartland where spruikers induce passers-by into their red sauce fiefdoms. And into this kingdom of carbs and cheese comes Kazuki’s. Yes, the Japanese-ish, French-ish modern restaurant from Daylesford has swum against the tide of real estate refugees moving to central Victoria and upped stumps to the city.

So what would induce two successful restaurateurs such as Kazuki and Saori Tsuya to take  reopen in the big smoke after seven years in the country? (Incidentally, there’s still reason to seek them out at the Daylesford address, now a more casual Japanese diner called Sakana). Luckily our task at hand is not to enter the fevered minds of hospo folk but to judge their actions. And the augurs for Kazuki’s – and indeed for Lygon Street itself - are good.

It’s an evolution of the Daylesford mothership in every regard. A startlingly zen-like fit-out courtesy of Design Office has banished every layer of surplus detail. The grey-blue walls are boldly bare. The soft yellow-gold carpet is blissfully sound-quashing. Two supersized paper lanterns, one of the few decorative flourishes allowed, adroitly carry the Japanesque theme, as does the parade of wabi-sabi (perfectly imperfect) ceramics.

The aesthetics are just as keenly realised on those plates. Kazuki-san remains executive chef but has stepped onto the floor, mostly leaving kitchen duties to head chef Anthony Hammel, whose mentee status to Mark Best can be seen in the precise approach to the food. A “make everything count” ethos means even a two-leaf chicory garnish to a nicely gamey slice of aged duck breast with shiitakes, radicchio and black garlic is there for its bitterness and not just its pretty red-stemmed green flourish.

There are two ways to tackle Kazuki’s, starting at the option of five courses for $130 per person and heading northwards to the menu of seven courses for $160. Our advice: go the five-course menu, if only to commandeer the four snacks as the first course. Your quartet might comprise meaty little Goolwa pipis on the shell, a mouthful of ocean heft with a ginger and soy backing track. A fat profiterole filled with the holy union of chicken liver parfait and thick Davidson plum and umeshu jam gets extra sweet/sour edge from the plum dust sprinkled like icing sugar over the top. Think of your favourite French starter running headlong into a doughnut from the Queen Vic Market and you’re halfway there. A thin nori crisp is topped with a creamy line of taramasalata and salmon roe soaked in sake for extra alcohol-popping roundness. The only duff note in a winning snack salvo is the underplayed salt in the house furikake that covers bouncy little duck hearts grilled on the hibachi.

Even salmon – yes, boring old salmon – justifies its place at this table thanks to the velvety swatches of lightly kombu-cured NZ King Ora getting its semi-salad on with pomelo, radish and cucumber. The skin is fried into crisps, a handy vehicle for ferrying everything from plate to mouth. There’s a bit going on – whispers of ginger oil, buttermilk dressing, lime zest – without really going from exceptionally pleasant to transcendent. But that duck? Killer, thanks to the bold gaminess from being hung for seven days in the Kazuki’s coolroom meeting its bitter match in radicchio puree and black garlic powder. As for a Skull Island tiger prawn, the shellfish supermodel of the Northern Territory is grilled on the hibachi with a shio koji glaze for subtle umami factor then doused in sake beurre blanc dotted with salty flecks of avruga.

Go the booze matching, if only to cut down on oceans of choice across 19 extravagant pages with their heart in Victoria and hands wandering across the globe. A yuzu sake served with dessert – a yuzu curd/ANZAC biscuit/mango/yoghurt ice-cream reconstructed number – is remarkably like limoncello. That isn’t enough to prevent a little culture shock when you step from this rarified little island of zen out to the pastoral Lygon scenes of people sitting under plastic awnings eating pizza off metal trays.

Carlton has witnessed a rising tide of Asian excellence (the Japanese café Ima and restaurant Torissong, the northern Chinese Super Ling) in the past few years. That it has finally made its way to Lygon Street – well, all the better. 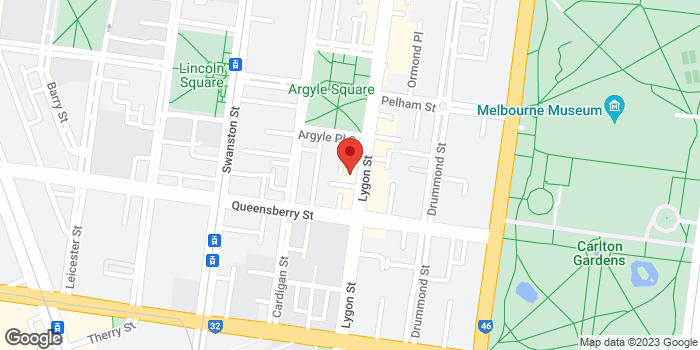