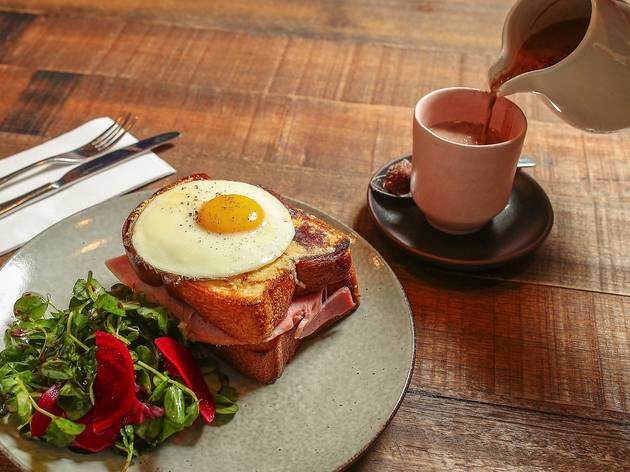 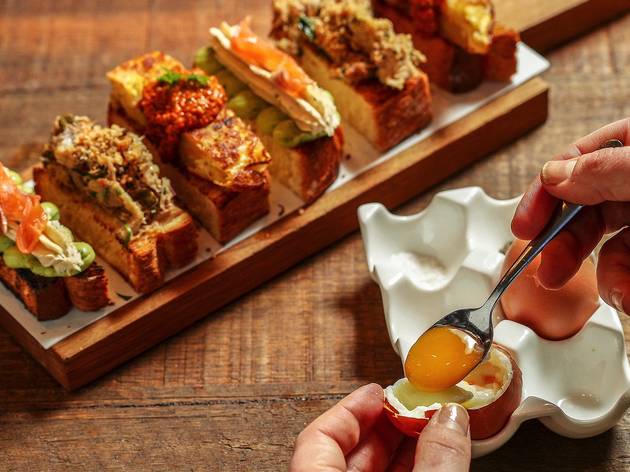 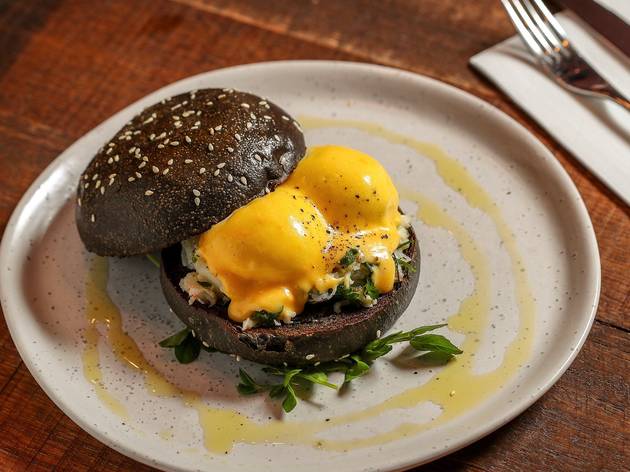 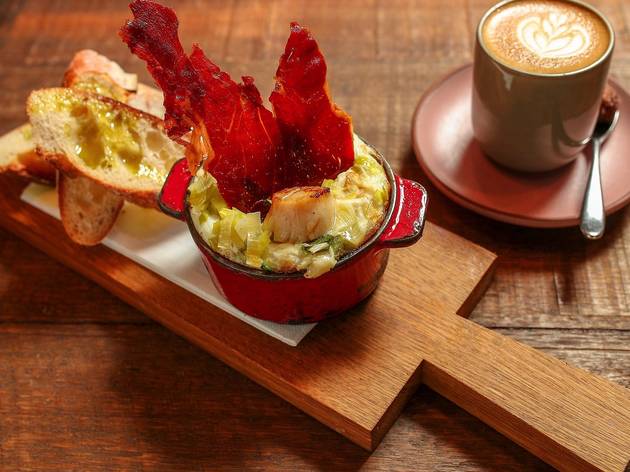 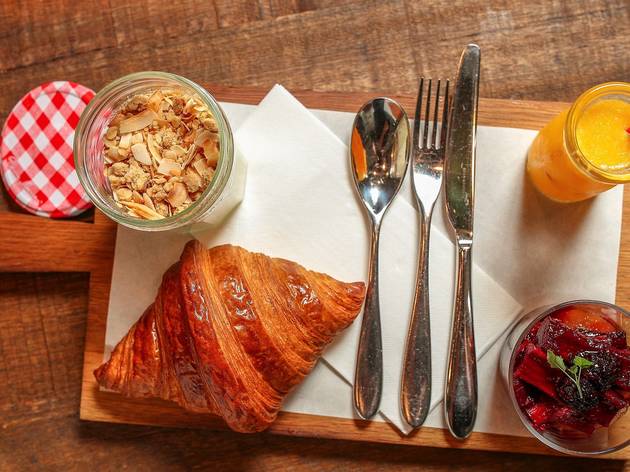 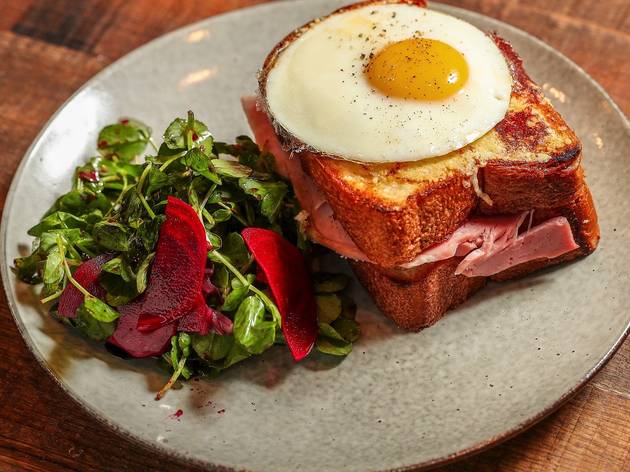 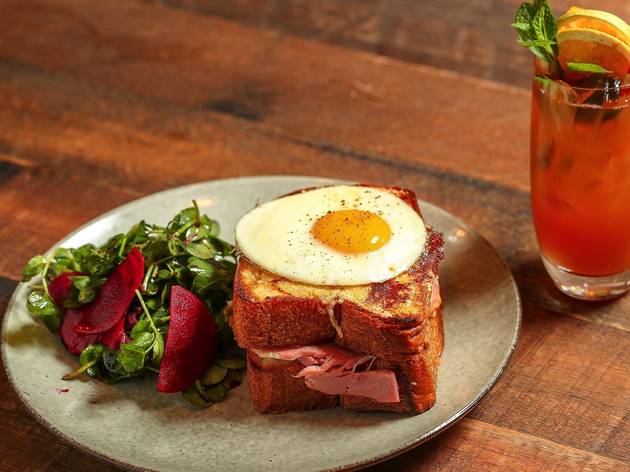 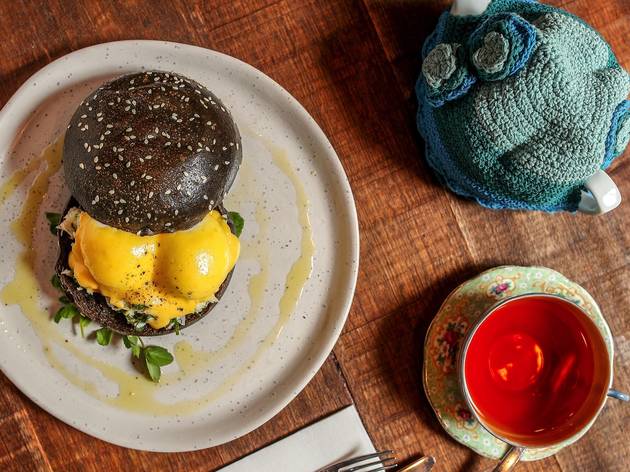 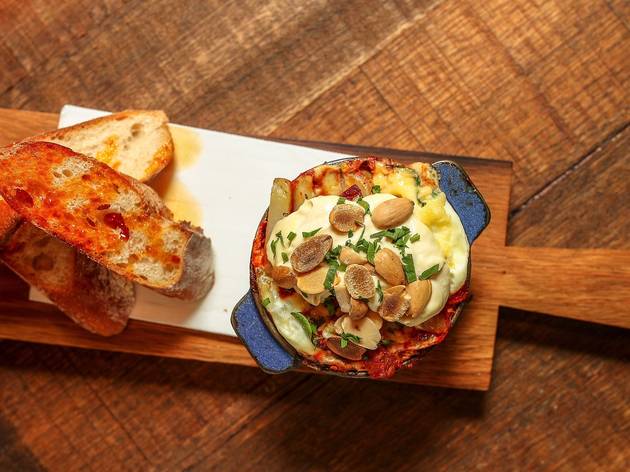 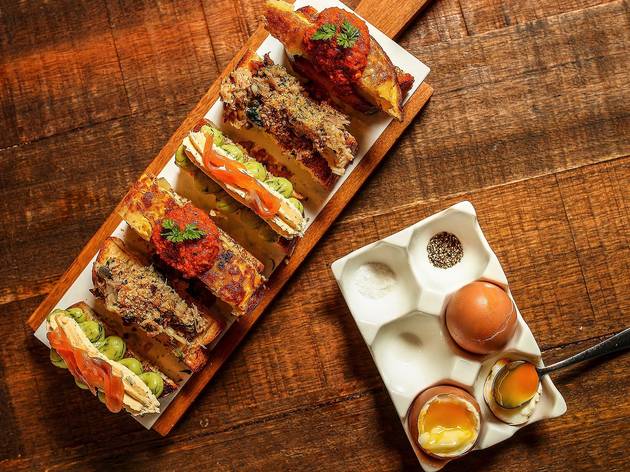 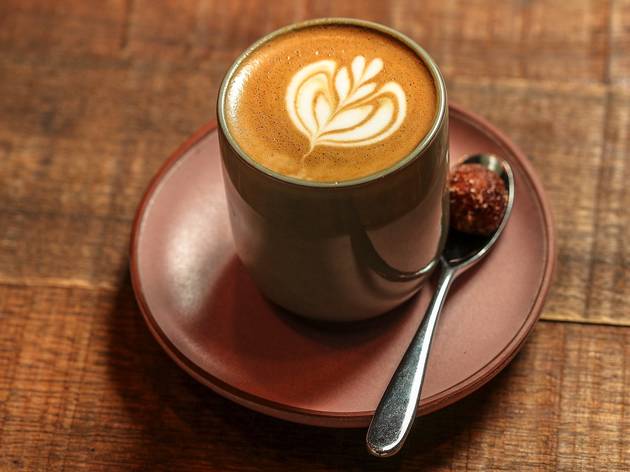 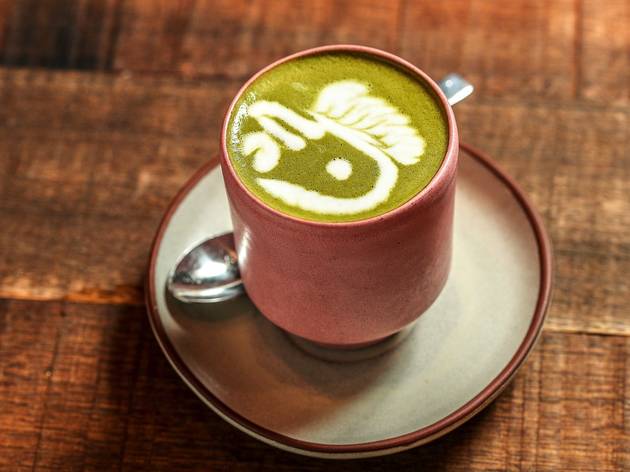 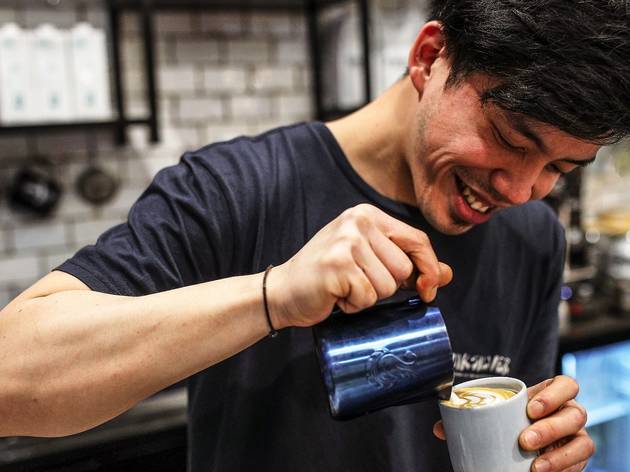 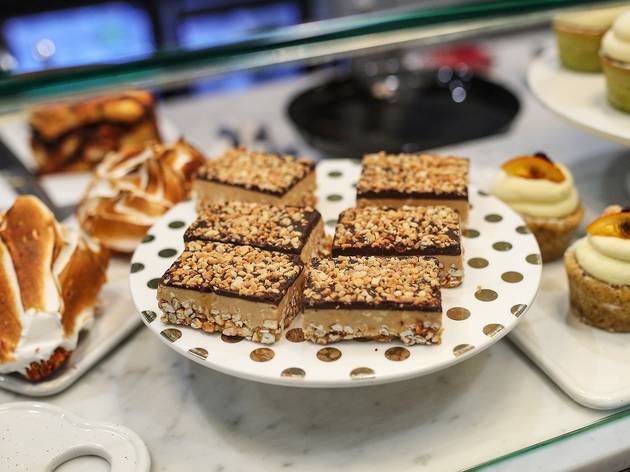 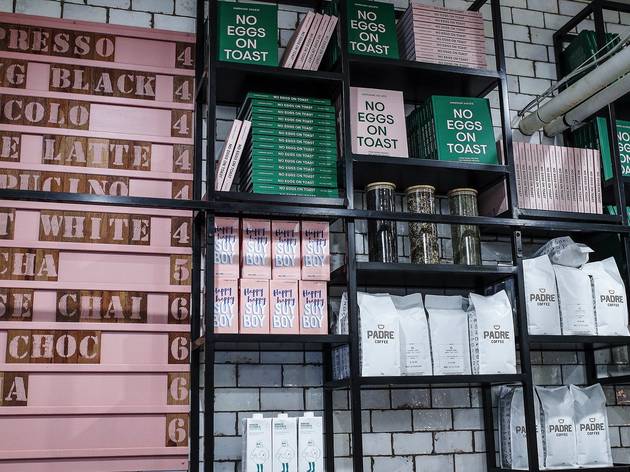 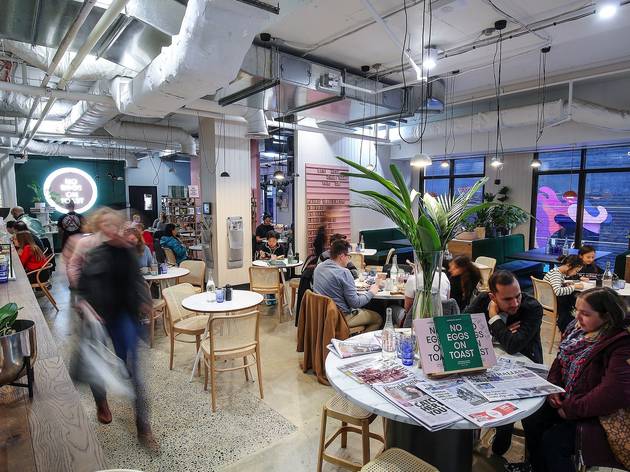 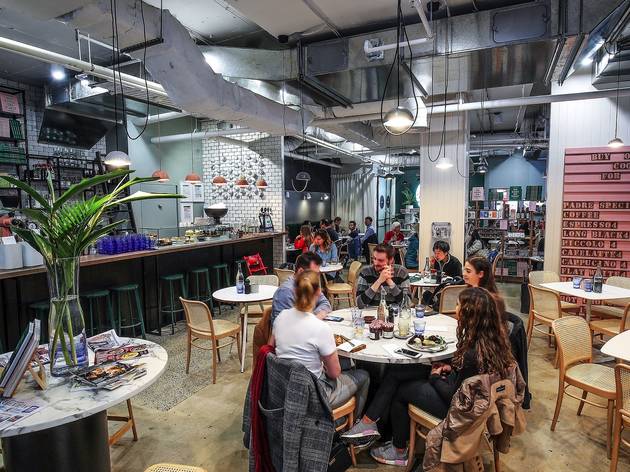 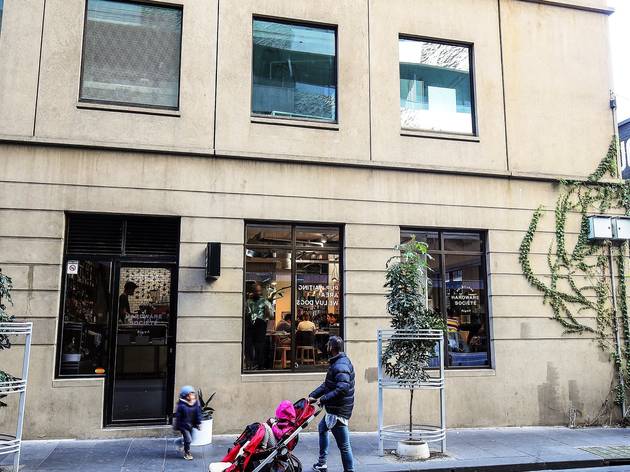 A Melbourne institution has moved premises, bringing with it its legendary brunch menu – and long queues

Surviving a decade in Melbourne’s hospitality industry is no easy feat. Thriving in it is even harder. Hardware Société has managed to do the latter. Opened by husband and wife Di and Will Keser in 2009, who now reside in Paris, the legendary café bid adieu to its eponymous location on Hardware Lane in February and made the move to a bigger, brighter space on a laneway a stone’s throw away from Southern Cross Station. A smaller second venue on Hardware Lane is still standing and the Kesers even opened an outpost in Montmartre, Paris in 2016.

The queues snaking around the cobblestone alleyway of the original location have been transported with the move. We arrive early on a Saturday morning and luckily don’t have to wait for a table. Within half an hour, we see the beginnings of those famous lines outside. Inside, it’s très chic. Pink walls with green detailing match the design of the café’s cookbook, Parisian wicker chairs encircle white round marble tables, vintage posters of French fashion houses intermingle with lots of greenery and exposed piping. There’s a shelf jammed with artisanal produce from Europe and a huge glass cabinet displaying drool-worthy sweets, like a baked vanilla cheesecake and lemon tarts.

Hardware Société’s menu may have had tweaks over the years but its modus operandi remains the same: you won’t find the eggs on toast or smashed avo here. Instead, chefs Carla Eyles and Adam Lai focus on rich, French-inspired dishes that remind you how special brunch can be.

In the Croque Madame, thick slices of leg ham from Savour and Grace, comte and braised leeks are jammed between slabs of square brioche doused in béchamel and crowned with a fried egg from free range legends Burd Eggs. The side salad of pea tendrils and pickled beetroot provides the needed acid and freshness to cut through the creaminess of the sandwich. A charcoal bun contrasts with its insides of cold poached lobster, 64-degree eggs and bright yellow lip-puckering citrus hollandaise. Baked eggs arrive on a wooden paddle with a cast-iron ramekin overflowing with a still-bubbling concoction of eggs, chorizo, slivers of potato, piquillo peppers, queso mahon, toasted almonds and aioli in a light tomato sauce. It’s hearty and zesty in equal measure and you’ll be grateful for the accompanying crusty baguette to mop up the remains.

For something lighter, dip brioche soldiers into 64-degree eggs and chase with spoonfuls of fluffy salmon mousse and cooling avocado cream. Or channel a European hotel breakfast with the Continental: a spread of St David’s Dairy vanilla yogurt, coconut crumble, pear poached with vanilla alongside rhubarb and blackberry, flaky croissant from Noisette and an organic orange juice.

Coffee by Padre is top notch – a given for a café that’s been around for ten years. You’ll want to order a few of those creamy flat whites, even if just to get another sultana-studded cinnamon-dusted doughnut ball. The neighbouring table, meanwhile, was very into their hot chocolates, made with 54 per cent Belgian dark Callebaut.

Hardware Société knows that when you’re onto a good thing, don’t change it: expand it. Its uncompromising attitude on what brunch should look like has earned it a cult status – and rightly so. We’re excited to see what the next ten years hold.