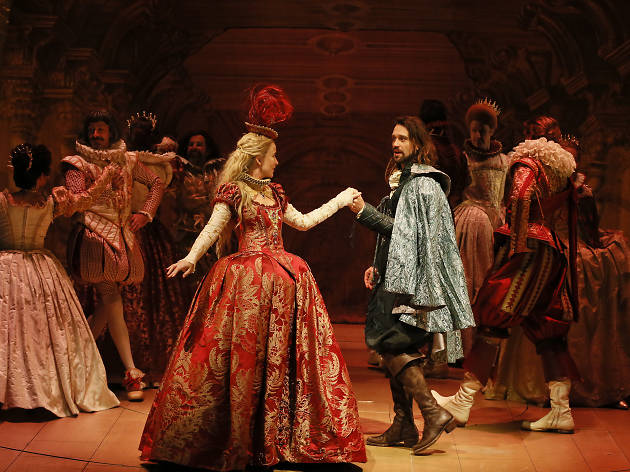 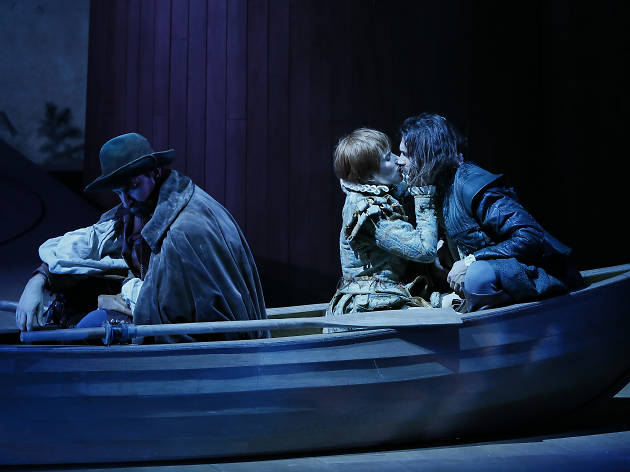 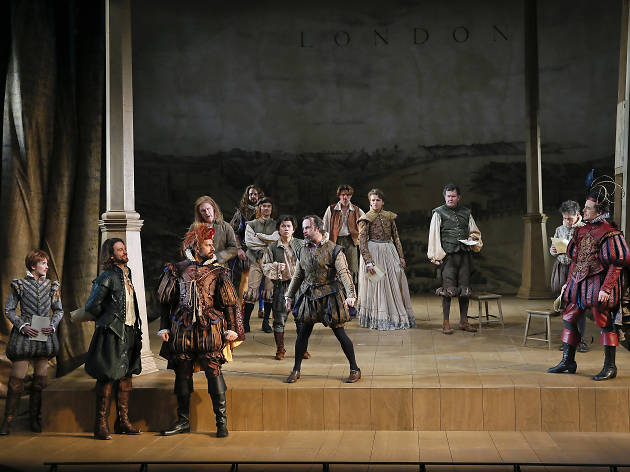 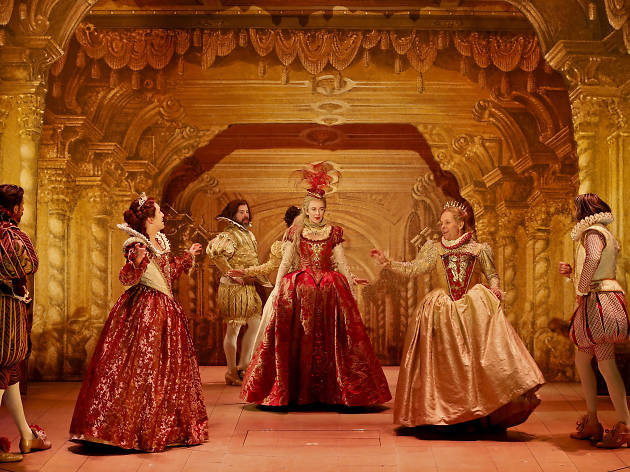 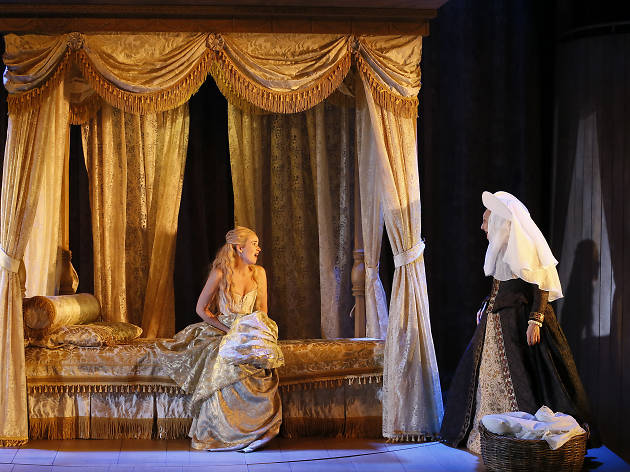 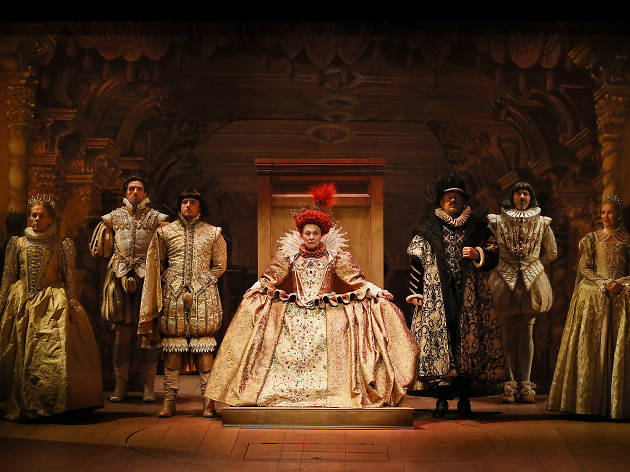 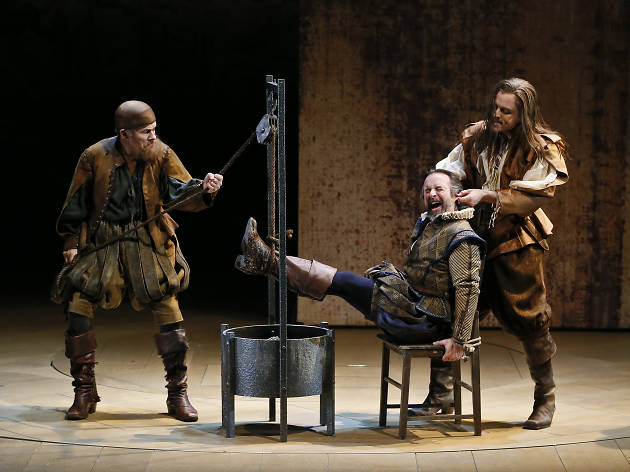 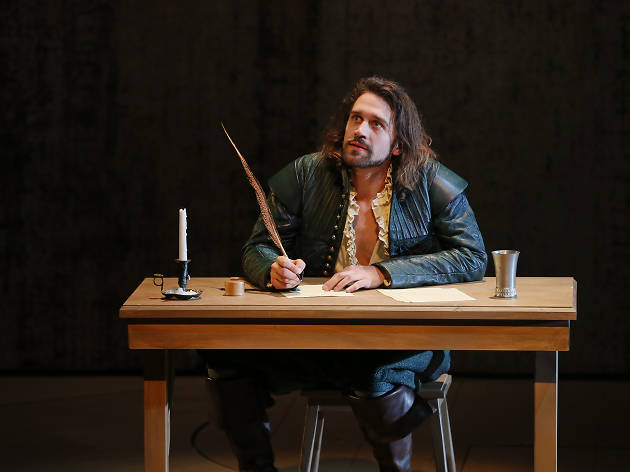 While it’s far more common for plays to be adapted into films, there is an increasing trend for films being turned into plays. Melbourne audiences have seen several in recent years, from Malthouse’s Solaris and Melancholia to MTC’s own North by Northwest and Double Indemnity. They are always curious monstrosities, leaning on their theatricality while nodding furiously to their cinematic sources. But Shakespeare in Love feels different somehow. Playwright Lee Hall isn’t merely indulging in hyperbole when he says that in the theatre “the story had found its natural home”.

The screenplay was initially written by Marc Norman, who came up with some clever ideas of his own, but it truly came to life when passed through the genius of Tom Stoppard, who’d had such a hit with the Shakespeare-themed Rosencrantz and Guildenstern are Dead. Stoppard is a master playwright when he isn’t writing screenplays, so Hall had a daunting job on his hands. The play had to feel like a legitimate (fine word, legitimate) work in its own right, so it’s pleasing to see it surpassing the original in so many ways.

The thing it does most is put the Shakespeare into Shakespeare in Love. The film always seemed like a story about the bard for people who didn’t get or much care for the bard, but here the mashups of Shakespearean tropes, the inside gags and reverential winks, even the gross inconsistencies and anachronisms, all combine into a love sonnet for the man and the endurance of his works. And there is much more of the poetry here: large swathes of Romeo and Juliet, including two versions of the bedroom scene and an exquisite rendition of the lovers’ deaths; not to mention the overabundance of quotes from other plays that lie scattered about like gems brought to life in the least likely of places.

The story is pure confection perfectly realised. Will (Michael Wahr) is struggling to provide a play to theatre impresario Philip Henslowe (John Leary) and promises him Romeo and Ethel, a Pirate’s Daughter, despite the fact he hasn’t written a word. Meanwhile, Viola de Lesseps (Claire van der Boom) desperately wants to act on the stage that disallows women, so she disguises herself as a man and auditions for Shakespeare’s play. The two fall in love, which enrages her suitor Lord Wessex (Daniel Frederiksen), and puts the whole company in jeopardy. Can Will write the play we know the world needs, and will Viola be able to act in it?

On the way, we meet some of the great legends of Elizabethan theatre, including Elizabeth herself (played by Deidre Rubenstein with such impervious regality she sweeps the memory of Judi Dench clean from the mind). There’s the vainglorious actors Richard Burbage (Aaron Tsindos) and Ned Alleyn (Chris Ryan), the court puritan Lord Tilney (Francis Greenslade) and the up-and-coming psychopath/playwright John Webster (Aljin Abella). Throw in a dog (Daisy, spectacular) and some clever musicians (led by musical director Andrew Kroenert), and the world’s a stage.

Director Simon Phillips has teamed up with his now well-established design partner Gabriela Tylesova to outdo themselves after the triumph of their recent Twelfth Night. But rather than pour excess over excess, they’ve managed to make some of the most outré mise-en-scene feel perfectly natural. Tylesova’s costumes are stunningly beautiful, offset by the simplicity and practicality of her sets; everything here glides and makes way. As with all this pair’s work, their worlds are playthings for their actors, which is the very definition of good design. In the same way that Baz Luhrmann is indebted to Catherine Martin, so Phillips is indebted to Tylesova.

There is such a wealth of talent here, and such an ease of employment, that it feels churlish to single anyone out. Certainly Wahr and van der Boom make a gorgeously seductive and credible couple; he is so bursting with inspiration and she so prepared for her emancipation, that their coupling feels predestined. There is gorgeous support from such stalwarts as Tyler Coppin, Peter Houghton and Greenslade. Ryan is a delight as the amiably egotistical Alleyn, and gets to show off his magnificent vocal chops. Luke Arnold makes a swarthy Kit Marlowe, Frederiksen has a ball as the heinous Wessex, and Laurence Boxhall is delightful as the boy who gets all the girl parts, Sam. But really nobody is less than stellar, and as an ensemble they radiate pure joy.

Shakespeare in Love may be one of MTC’s most lavish productions in years, but it has an earthiness to it, a knockabout honesty and vigour, that is unstuffy and entirely winning. As Daisy bolts off with a manuscript in her jaws, and the whole cast lumbers after her, we can only be in the theatre. In fact, the play is one long and heartfelt love letter to the theatre and all who tread upon her boards; unlike other screen adaptations, the film seems to drift out of the consciousness for the duration. Shakespeare isn’t only in love, he’s home.