Everything Melburnians have forgotten during lockdowns

After so much time at home, we're all feeling a little rusty when it comes to going out and socialising

After months (months!) of lockdowns, Melbourne is finally returning to a semblance of normality as we move to the third step of the reopening roadmap. Now, while your first thought might be "GET ON THE BEERS" (it was definitely ours), after all that time at home, you might find yourself feeling a little rusty when it comes to heading out into the big city.

Hence we've put together this handy guide on what we've forgotten how to do during lockdown. Does anyone know of a good refresher course?

How to dine at a restaurant
Luckily, Melburnians have been able to still eat dishes from our favourite restaurants thanks to our hospo industry pivoting to takeaway like the absolute legends they are. But there are some quirks to dining out in public, that you may have forgotten about when stuffing your face at home. A handy reminder: you should not burp, pick your nose (in general but especially not in public), fart or eat with your mouth open when dining at a venue. Also a bonus: you won't have to do the dishes!

How to dress
After months of rotating between two pairs of stretchy pants and three hoodies, I genuinely cannot remember how I used to dress to go places. I am under the impression that much of Melbourne is in the same position. Unfortunately, stained activewear and outfits that look thrown together by a sugar-high toddler are generally not socially acceptable when you go out places, so we’re gonna have to start wearing actual clothing again, applying makeup to your whole face (if that’s your jam), wearing shoes other than runners and *shudders* ironing our clothes. And that means wearing pants – outside of Zoom meetings, people can in fact see if you’re wearing just undies and Ugg boots. When in doubt, wear all black.

How to greet people
Hugging is still not encouraged, as is shaking hands (honestly let’s keep the ban on shaking hands, it’s a gross flesh dance that deserves this death knell). So while we might want to leap into the arms of the friends and family we’ve been missing, we’ve got to greet them safely. The elbow bump has gotten a lot of attention as the “new” greeting method, but it’s peak dork and I think you know this too. Especially when we’ve had the perfect method of contact-free greeting all along: just give your friends a wave.

What the heck to pack for a day out
Leaving your house for more than an hour now feels like you’re preparing to trek Tasmania’s Overland Track. What do I bring with me? Will I need snacks? Water? A blanket? Emergency flares? The basic tools you’ll need to go out in Melbourne are your wallet, phone, keys and mask. I would also hasten to add that a jumper and umbrella are also wise additions given Melbourne’s rep for changeable weather. Sunscreen, too, if you're eating outdoors. And maybe a bottle of hand san for good measure.

How to use public transport
Wait so do I tap on and off on trams or just on? Or just off? Where does my train change for the city loop again? WHAT SIDE DO THE DOORS OPEN AT THIS STATION?! Many of us have been avoiding public transport for a few months and it is really easy to forget how it works. Check your regular routes before you start using them again as there might have been changes to them that you haven’t noticed while at home. And once more for anyone who has forgotten: you only need to tap on with trams – don’t hold people up trying to tap off when disembarking.

What is time
Melburnians collectively agreed to do away with the concept of time for the lockdowns. Oh, there was a vague sense of morning, lunchtime and night, but otherwise, the only actual time we had to mark was curfew. It’s led to even the most punctual of us being a little groggy about moving back into a world marked by train timetables and timed restaurant bookings. Give yourself more time than you think you need when getting ready to go places and be kind with yourself (and others) if you’re running late.

How to socialise without being a weirdo
All of us have been stuck at home for months with only our partners, family, housemates or ourselves (and maybe a pet or two). This has led to our social skills taking wild deviations from what is publicly acceptable, whether that be communicating like a goblin with our siblings or narrating our daily activities through song. Small talk is about to make a comeback in a big way so get ready to chit some chat. And remember: there is no mute or camera button in real life: you do or say something weird in public and EVERYBODY sees it.

What a weekend is and how to enjoy them
When there is very little to do, places to go and no one to see, weekends feel a bit like “being alone with my thoughts and not much else” time. And that feeling applies to any unstructured time – those who’ve been lucky enough to have work during the lockdowns have enjoyed the added benefit of having a routine. Without a routine (be that because it’s your day off or because you’ve lost work) you can end up pacing around your home for literally hours before calling it a day and going to bed. BUT with Melbourne moving to the third step, we can see more people, go more places and do more things. TLDR: we can make plans and look forward to the weekend for the first time in months.

How to shop IRL
Put down the tape measures. With all retail able to return from October 28, you no longer have to guestimate your size online; you can actually go into a store and try clothing on (just like you see on TV!). Now that we can go back to physical stores, make sure you’re being a conscientious shopper. Don’t run your grubby little mitts on everything just because you can, wear a mask and keep 1.5 metres from other shoppers – including when lining up at the register. There’s nothing like the anxiety from a stranger breathing down your neck during a pandemic.

How to be a smug bastard
Melburnians have a reputation for being smug, and it’s a reputation that’s not exactly unwarranted. There's no shame in it. After all, from our world-class arts and culture industry to our outstanding dining scene, we have a lot to be smug about... or we did until we became the corona capital of Australia (hey, it’s not our fault if the virus also decided we were the most liveable city in the world!). And while the pandemic isn’t over by a longshot, Melburnians can start feeling a little smug again. Plus we have a whole new thing to feel smug about – crushing the second wave. Nature is healing. 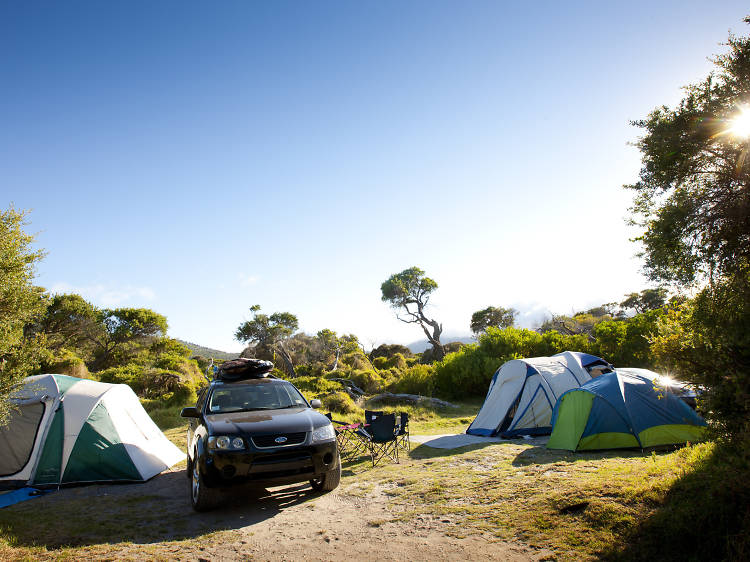 The best Victorian campsites near Melbourne

There are plenty of places a stone's throw from the CBD where you can lawfully pitch a tent – take a look at the best here.