New arrivals to San Francisco International Airport could be forgiven for thinking celebrities regularly patrol the halls. After all, what else could be causing the crowds of people to swarm intermittently, their smartphones held aloft ready to capture the perfect selfie?

But it’s not a celebrity the gaggle is waiting for – not a human celebrity anyway. As SFO spokesperson Doug Yakel explains, it’s LiLou the pig that the crowds want to see.

“She is such a unique idea,” says Yakel. “It’s like an A-list celebrity going through your airport."

LiLou has been bringing love to San Francisco Airport since 2015 as part of the Wag Brigade, a group of therapy animals who voluntarily patrol SFO’s terminals giving out pats and cuddles to frazzled travellers. The idea to bring animals into the airport comes as more and more airports around the world try to make air travel a little less stressful. “We’re always looking for unique ideas that would surprise and delight our guests,” says Yakel. 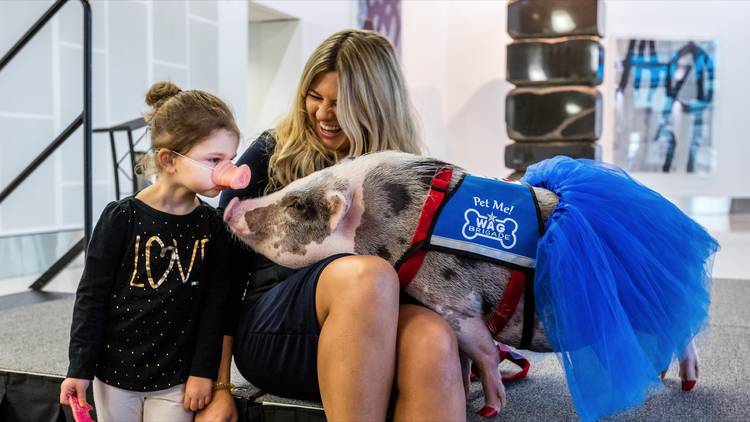 And no one surprises and delights quite like LiLou, with the tutu and tiara-wearing porker barely able to make it a few metres without being approached for a pat. “It’s been quite an amazing reaction,” says Yakel. “A lot of selfies, a lot of people wanting to come up and pet her."

"Just like any good A-list celebrity, LiLou lets the adoring fans come to her"

The saying might be that you should never work with animals (or children), but in this case LiLou and the rest of the Wag Brigade are well up to the task. All animals included in the Wag Brigade go through a certification program run by the San Francisco Society for the Prevention of Cruelty to Animals’ Animal Assisted Therapy Program, as well as an airport orientation to ensure they can handle the sometimes hectic environment (and best look after visitors).

While LiLou is the Wag Brigade’s resident diva, there are plenty more animals in the group bringing a little love and a lot less stress to SFO’s airport experience. Since launching in 2013, the brigade has grown to include more than 20 dogs. That includes little Tristan, a French bulldog who scoots around the airport with the help of a tiny improvised wheelchair after suffering partial paralysis to his hind legs. Not that it stops him bringing smiles to travellers. “For a little dog who has mobility challenges he has such a great disposition,” Yakel says. “One day we had both LiLou and Tristan walking down the concourse at the same time and honestly we thought we were gonna break the internet.”

On any given day at SFO airport you can find around two to three members of the Wag Brigade walking the halls and giving out snuggles. While staff are currently working on a way for travellers to find out when and where to see the four-legged crew in advance, it’s currently potluck who you’ll run into – our tip is to look for the crowds. 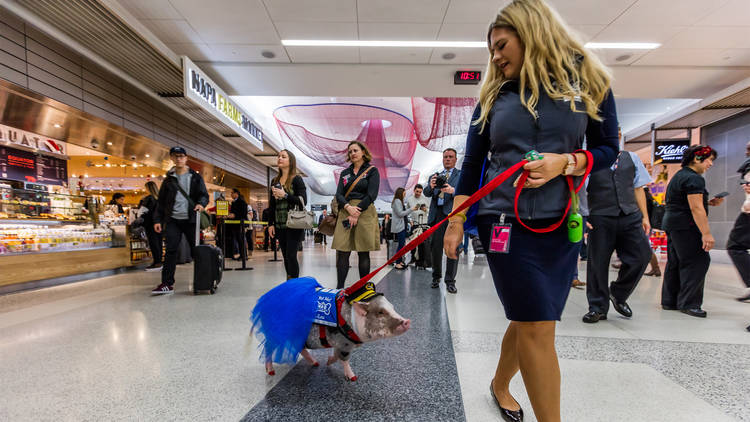 Even if you don’t catch a glimpse of the airport’s famous animal companions, there’s still plenty more to do at SFO. As Yakel explains, “the goal is to give travellers options, to give travellers a variety of amenities so they can customise how they’re going to spend their time in the airport.”

Those options translate into facilities catering for all types of travellers, from families with kids to the corporate crowd and those just kicking off their holiday. Free time at SFO is easily filled by spending time in the airport’s yoga rooms, library and museum (the first airport museum in the US to have an accredited program – plus a miniature movie theatre).

Travellers feeling poorly have access to a medical centre on premises and there’s also a travel agency with space to store luggage or have a nap. Got kids? Each terminal has a ‘kidspot’, an area where kids can blow off steam pre-flight while parents can take advantage of the airport’s free Wi-Fi (which extends right up to the jetbridges).

For those heading into the San Francisco, the BART Train takes you straight into the city and can be accessed from the SFO international terminal. Tickets can be bought from an automated machine at the station.