NYC has the best kid's playgrounds in the world! Our curated list makes it easy to visit the coolest ones in the city.

It's the golden age of kid's playgrounds in NYC! In recent years the city has completely transformed playtime for city kids, adding creative play spaces to almost every corner of the Big Apple. The secret behind this greatness? It's all thanks to the New York City Department of Parks and Recreation, which pours tons of resources into the city's youngest residents.

These days there are a huge variety of playgrounds in the five buroughs. There are classic versions with swings and slides at spots like Heckscher Playground in Central Park and the playground at Union Square Park, and there are those dedicated to one super-fun activity like Splash Pad in Prospect Park and Slide Hill on Governor's Island. And then there are the new-fangled, design-forward parks like Central Park's Adventure Playground, Imagination Playground in Prospect Park, the New York Hall of Science Playground in Flushing Meadows-Corona Park and the Tom Otterness Playground which will encourage your kiddos to play in out-of-the-box ways.

So, let the wild rumpus begin! It's time for your kids to climb, and stomp, and swing, and run around until they can barely move. You can do it again the next day, or you could explore our favorite bike trails for NYC families, or the best hiking trails for NYC families to explore. Maybe you want a total change of pace, and plan on heading to one of the best drive-in theaters in and around NYC? Whatever you decide, we'll help you make this time with your young ones a memorable one.

The best kids' playgrounds in NYC 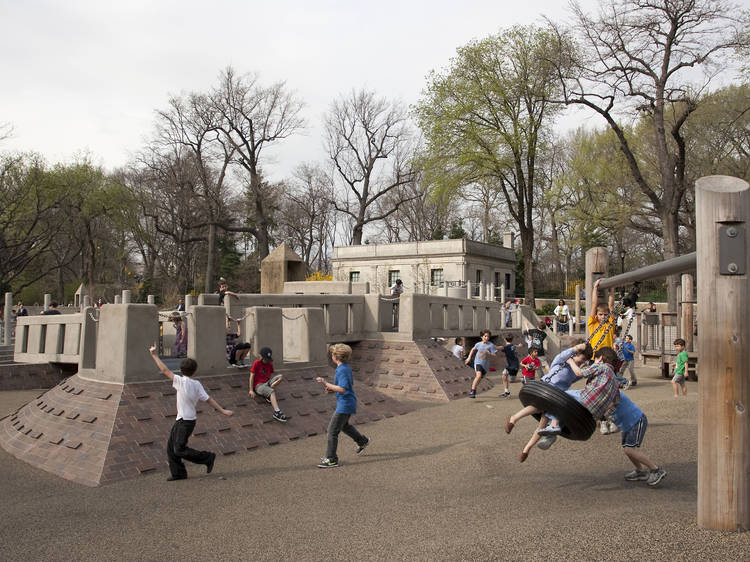 Every NYC kid should spend an afternoon bomping around the Ancient Playground in Central Park. The recently-renovated brutalist complex of pyramids, bridges and other structures encourages creative play, while the sideways view of the Met Museum can't be beat. Bonus: The spotless bathrooms have new fixtures. Be sure to spend a moment looking at the intricate sculptures on the entrance gate: The animals are acting out Aesop's fables. 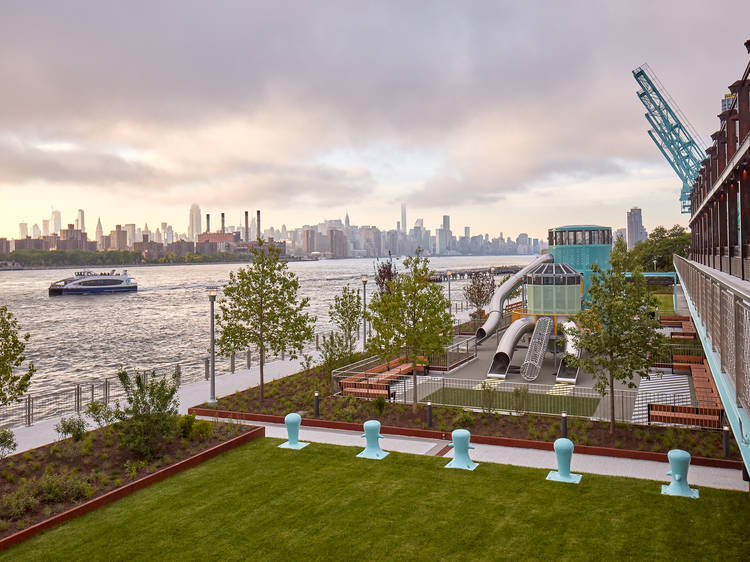 This playground on the Brooklyn waterfront has made its mark in NYC. With an industrial aesthetic that pays homage to the neighborhood’s past, Domino Park set up shop in the space where the Domino Sugar Refinery once stood. Now there's a huge splash pad where kiddies can cool off, an epic playground, great views of the Manhattan skyline and of course, sweet spots where you’re able to refuel. Mom and Dad, you’ll be pleased to know that Danny Meyer’s Tacocina is at the ready with tasty cocktails. 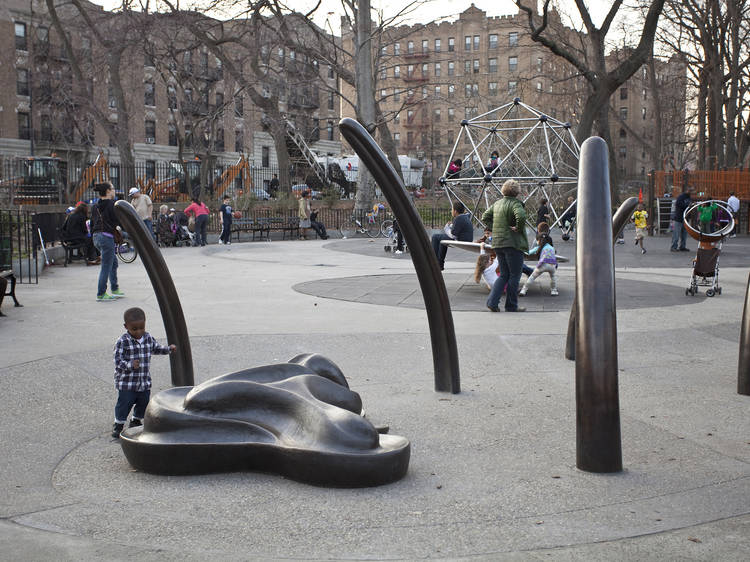 This Prospect Park playground bordering Windsor Terrace was renovated in 2010 and it's been a neighborhood fave ever since. There are steering wheels for pretend road trips, objects that make all kinds of noises, a corkscrew slide and lots of miniature seats on which tots can take a breather. Older kids will love the crazy spinners and a mega climbing structure. Everybody loves the water play zone, where the sprays will catch your kids and make them squeal with delight. 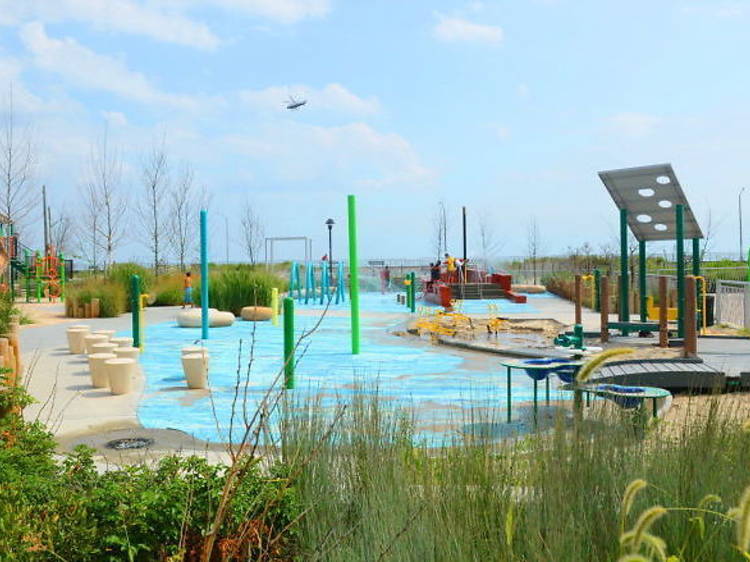 The Rockaways offer plenty of sandy fun, but just about any child would love to splash around in the Beach 30th St. Little bathers can run under a series of blue arches that will soak them from head to toe and a ship playscape will have kids battling it out with water-shooting cannons to become king of the high seas! In need of dry land? Don't miss out on the playground's jungle gym. 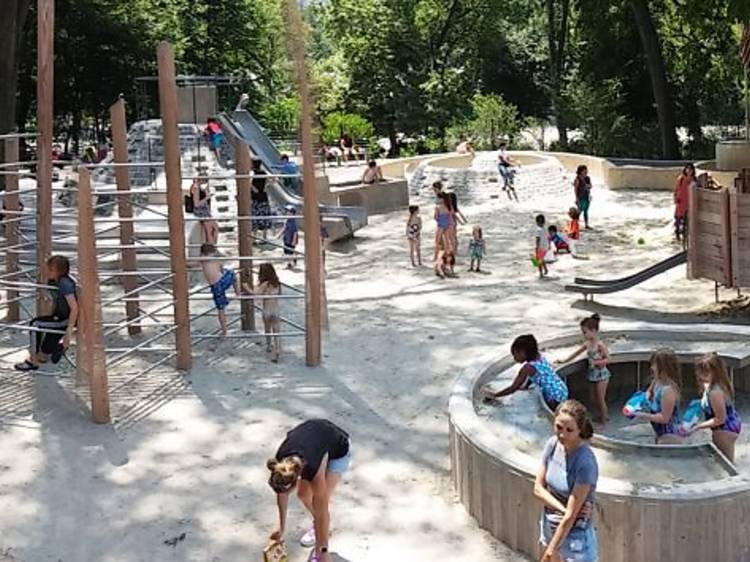 Adventure Playground is hiding in plain sight. Tucked up on a tiny hill above Tavern on the Green, the playground is within touching distance of the hordes of tourists who tromp through Central Park and yet it feels like it's for New Yorkers. A water spray feeds a shallow canal that flows through the middle of the sandy playground: It's messy, and kids love it. While Adventure Playground is for older kids, Tarr-Coyne Playground right next door is perfect for toddlers. 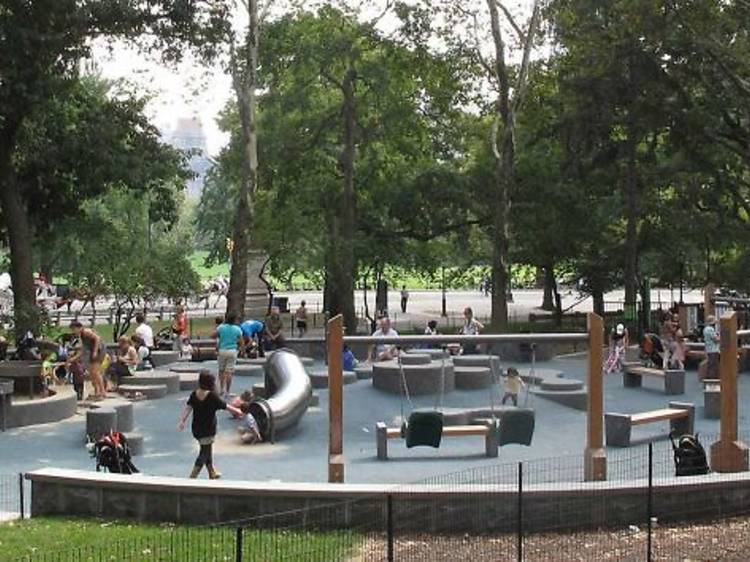 The toddler-scale version of Adventure Playground next door, Tarr-Coyne Tots Playground has water, and sand, and things to climb on, and swings, and everything a little New Yorker could want in a play space. Bonus: You can watch the horse-drawn carriages clop along the Lower Loop. 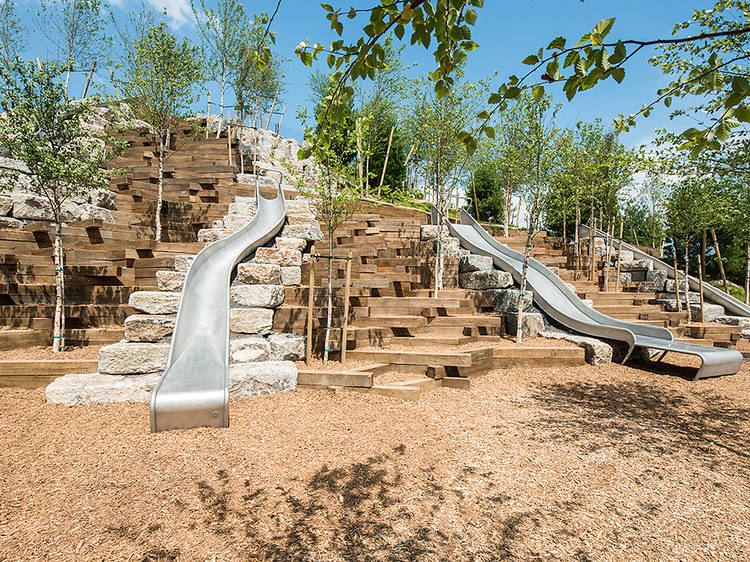 The name says it all: Slide Hill is a hill with slides. What's the big deal, you might ask? One of the slides has a three-story drop, making it the longest slide in the Big Apple. The ride is a thrill that your kid will want to experience again, and again, and again. There are smaller slides for smaller kids, plus gorgeous views of New York Harbor and Lady Liberty. 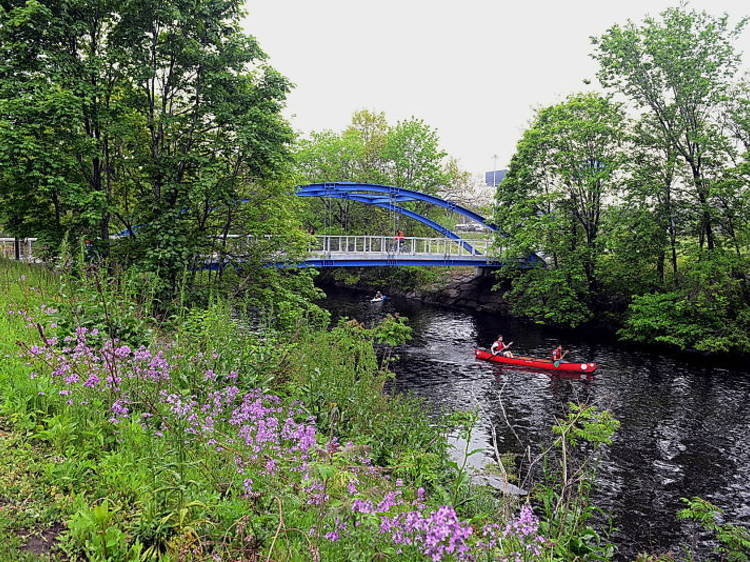 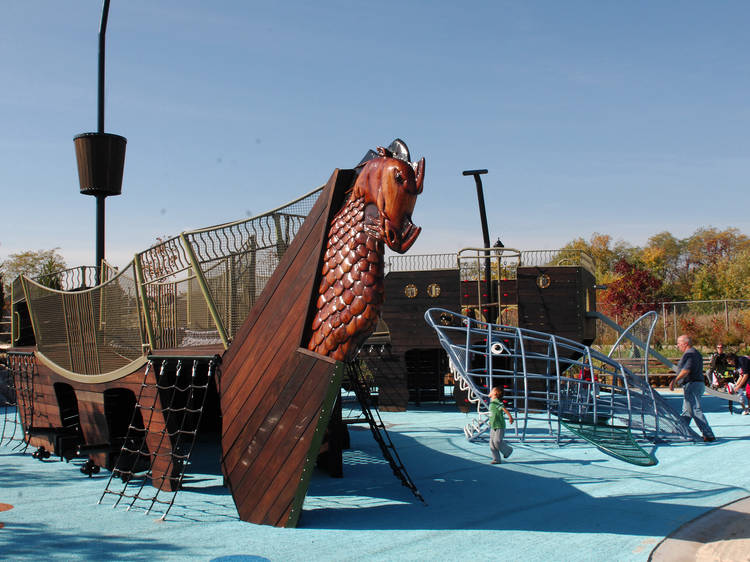 This Staten Island playground is one of the city's most inventive: Imagine a breezy oceanside fishing cove with rustic paths meandering through salt marsh vegetation to the beach and you have a pretty good idea of this playground’s exceptional location on the South Shore. The park’s planners put the sea theme front and center with two boatlike play structures—one with a regal dragon shiphead—an open-jawed shark jungle gym, a mini lighthouse and a gleaming, anatomically correct brass horseshoe crab, just for the fun of it. Plus, the soft white stuff in the huge sandy area seems as indigenous as the salty air. 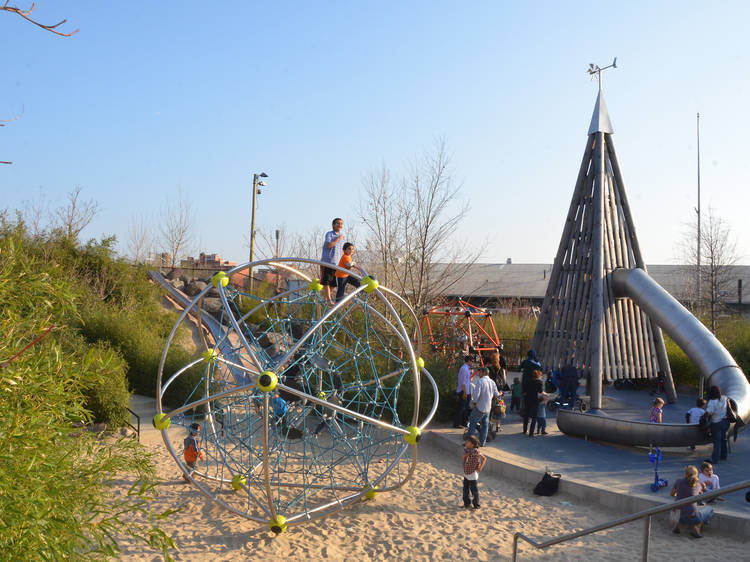 For kids, the highlight of Brooklyn Bridge Park is the complex of playgrounds on Pier 6. There's the Water Lab, with its spinning water wheel, splash pools, sprays and more; Sandbox Village, with its structures and sandlots; Slide Mountain, with its impressive wooden tower and slides; and Swing Valley, an overgrown allé with swings. There's so much to do, so much fun to have—good thing there's an Ample Hills ice cream stand close by to give your kids a boost.

More fun things to do with kids 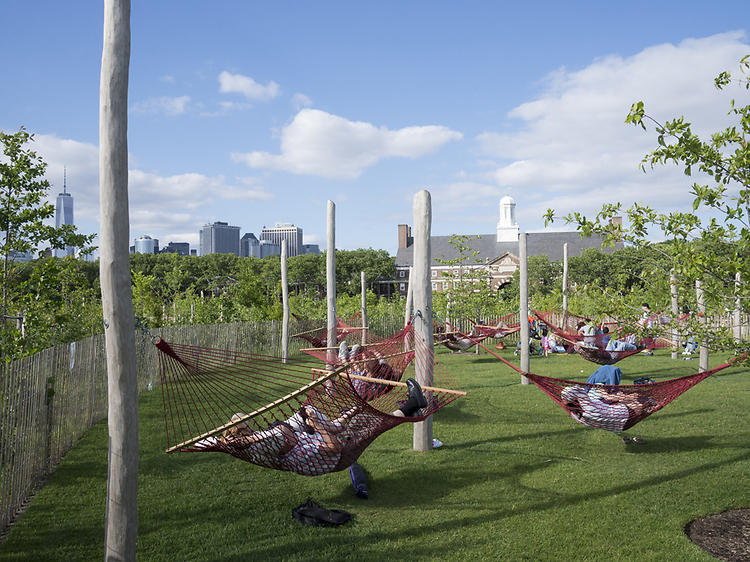 There are plenty of outdoor activities for kids in New York City—many you'll even love doing as a family! When you're not busy cuddled up with our favorite family movies on Netflix and our list of the best kids movies (come on—it's time to head outside!), you'll love exploring the coolest family attractions and the other amazing outdoor activities this amazing city has to offer.
Read more
Show more