The best art walks in NYC

Looking for a way to hit more than one gallery or museum at a time? Consult our guide to the very best NYC art walks.

Interested in taking in some art while putting steps on the ol’ pedometer? It’s easier than it sounds thanks to NYC’s unique art ecosystem. At the top, of course, are New York City’s world-class art museums, which include the Metropolitan Museum Of Art and the Solomon R. Guggenheim Museum, among others. Many of them, including the aforementioned, are clustered along Fifth Avenue, so you could visit more than one, if you’re so inclined. But that, admittedly, requires stamina, since some of these places—most notably The Met—are huge places where you could spend an entire day. Easier on the feet is a tour through one the city’s gallery neighborhoods. By some estimates New York contains some 1,500 art galleries, making it the largest such concentration in the world. So obviously, you can’t visit them all, but you can hit several at the same time, because these spaces are clustered near each other in various districts across the city, with Chelsea and the Lower East Side representing the largest of the lot. So what are you waiting for? Put on your favorite kicks and head out to explore amazing offerings of art—and get in some exercise while you’re at it. And if you don’t which direction to head in, don’t worry: We’ve got you covered with our guide to the very best art walks in NYC.

New York City has gone through huge changes in the past several decades, nowhere more so, perhaps, than on the fabled Bowery. Just a generation ago, it was Manhattan’s Skid Row; today, it’s home to pricey condo towers and art venues that include two major museums.

For this tour, take the B, D to Grand Street and walk one block west to the corner of Bowery, where you’ll find Simone Subal Gallery (131 Bowery, 917-409-0612, simonesubal.com). This second-floor space specializes in emerging and mid-career artists, many of them from Europe. Expect conceptual-oriented work with a refined aesthetic vibe.

Next, head north three blocks north until you reach Andrew Edlin Gallery (212 Bowery, 212-206-9723, edlingallery.com), one of New York’s premier showcases for Outsider and Visionary art. Walk one more block in the same direction until you arrive at the New Museum (235 Bowery, 212-219-1222, newmuseum.org), the most cutting edge museum of contemporary art in the city. It boasts a ground floor project space, three main gallery levels, a theater, a café and roof terraces. Just a few more doors down, there’s Salon 94 (pictured; 243 Bowery, 212-979–0001, salon94.com), a handsome below-street space with surprisingly high ceilings that give each exhibition an expansive feel.

Head down the street, where you’ll find Sperone Westwater (257 Bowery, 212-999-7337, speronewestwater.com), which originally opened in Soho in 1975. Today, it sits in an eight-storey, purpose-built showcase designed by starchitects Foster + Partners. One innovative feature of the place: a moving exhibiton hall—actually a 12-by-20-by-13-foot elevator that can be connected to any one of the floors to extend the viewing space.

Finally, keeping heading north to until you’re above Houston to check out The Hole (312 Bowery, 212-466-1100, theholenyc.com), a scrappy gallery that often goes for funky and outré work. 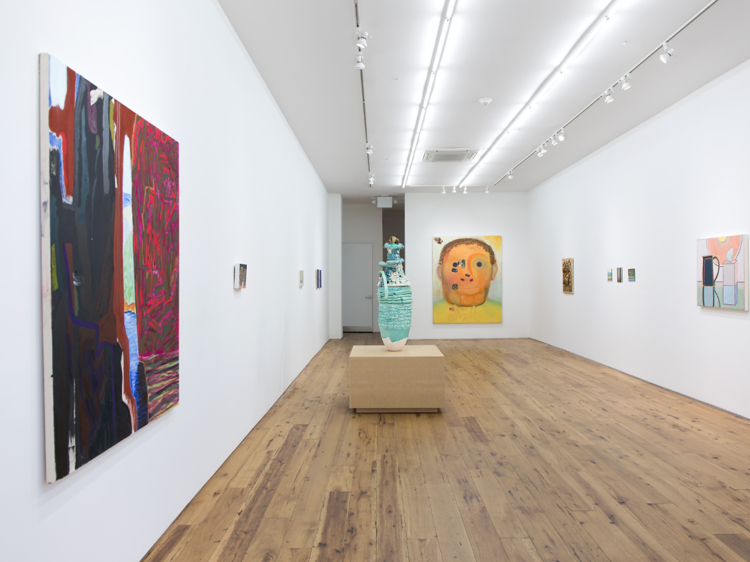 If you’re looking for galleries with a funkier, edgier vibe, look no further than the spaces on the Lower East Side specializing in young and emerging artists. Grand Street is one of the scene’s major thoroughfares with many of the area’s must-see galleries. Take the B, D to Grand Street, and start heading east.

You'll find more of the same by turning the corner onto Ludlow Street and ducking into Klaus von Nichtssagend Gallery (54 Ludlow St between Grand and Hester Sts, 212-777-7756, klausgallery.com), a long time LES staple. 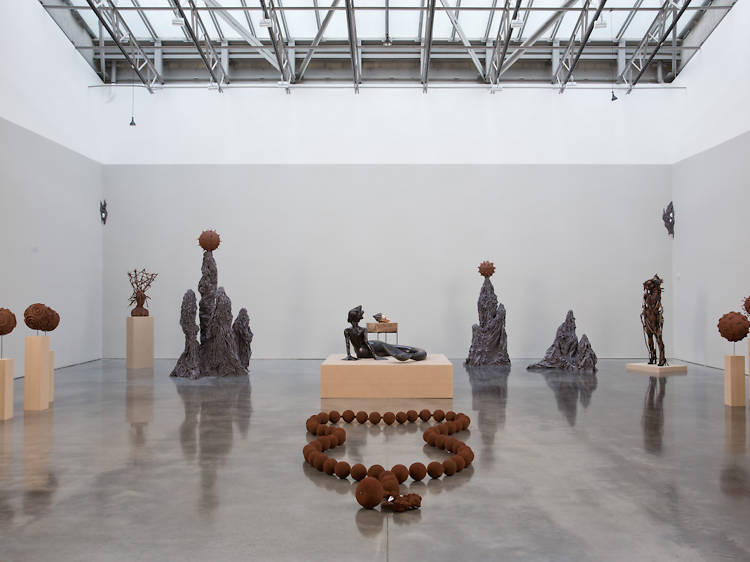 Chelsea’s row of galleries along West 21st Street between Tenth and Eleventh includes some of the most respected names in the NYC gallery world. To get there, hop the C, E to 23rd Street and head west to Tenth Avenue, before turning south to 21st Street.

Head a few doors in the direction of Eleventh Avenue to find Gladstone Gallery (530 W 21st St, 212-206-7606, gladstonegallery.com), a cavernous skylighted space that is strictly blue-chip. The gallery represents such Conceptualist and daring talents as Matthew Barney, Sarah Lucas and Anish Kapoor.

Next, stop into Paula Cooper Gallery (534 W 21st St, 212-255-1105, paulacoopergallery.com). One of the original galleries to open in Soho (1969!) and later in Chelsea, Cooper has built an impressive art temple. (She has also has a second space, across the street.) The gallery is known for Minimalist and Conceptual work by artists that include Christian Marclay, Carl Andre, Walid Raad and Bing Wright.

Finally, as you near Eleventh Avenue, you’ll come across 303 Gallery (555 W 21st St, 212-255-1121, 303gallery.com). A mainstay of Chelsea (and before that the Soho and East Village scenes of the late 1980s and early 1990s), 303 gallery got its start in the Park Avenue South apartment of principal Lisa Spellman (hence the name; it's her old address). Over the years, 303 has fostered the careers of critically acclaimed artists working in a variety of media—among them, photographers Thomas Demand and Stephen Shore and painters Inka Essenhigh, Mary Heilmann and Karen Kilimnik. 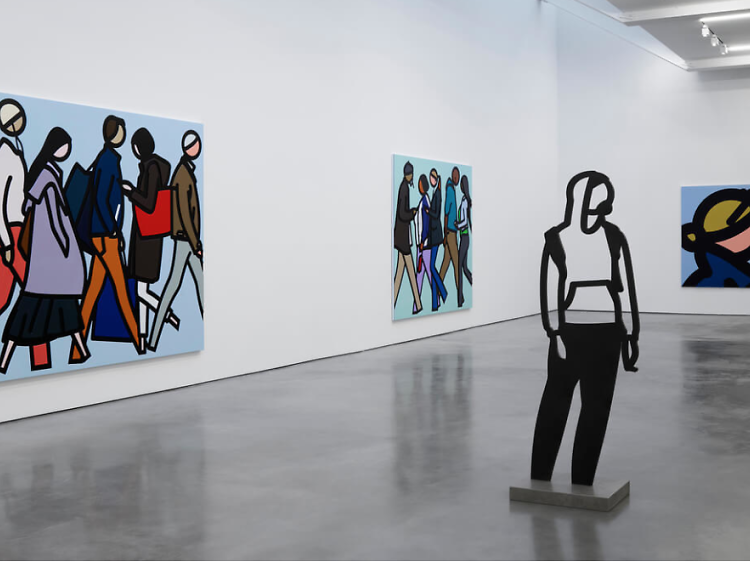 The block of West 24th Street between Tenth and Eleventh Avenues in Chelsea is the main drag for gallery-hopping, featuring a murderers row of New York’s biggest venues. Hop the C, E to 23rd Street and head west to Tenth Avenue, before turning north to 24th Street.

Wrap up your tour at the end of the block with that gigantic Chelsea staple, Gagosian Gallery (555 W 24th St, 212-741-1717, gagosian.com), home to such art-world major-leaguers as Richard Serra and Yayoi Kusama. 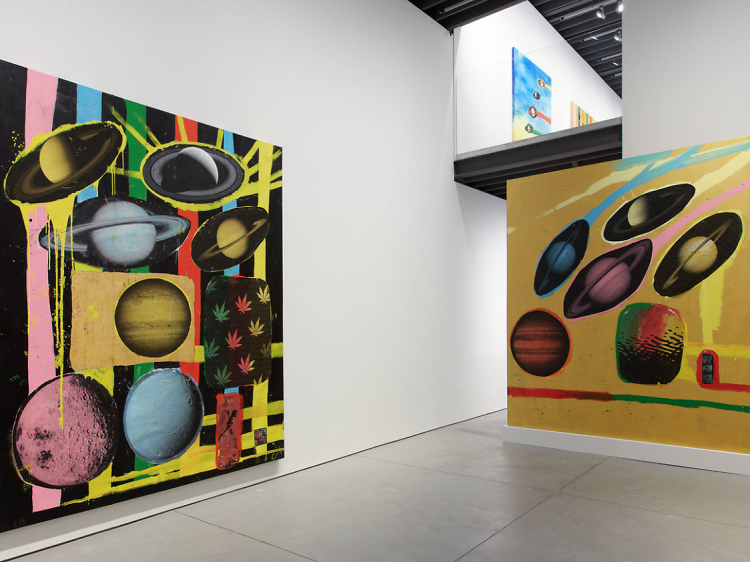 This midtown corridor has an art scene for a lot longer than Chelsea and the Lower East Side, and the galleries here are among New York’s most venerable, offering exhibits of Modern and contemporary art that are well worth a trip. To get started, hop off the F at 57th Street and begin walking east.

Head south again to 57th Street and go east past to Pace Gallery (32 E 57th St between Park and Madison Avenues, 212-421-3292, pacegallery.com), where Robert Rauschenberg, Mark Rothko and Pablo Picasso are just some of the names who are on show. The same address is also home to Pace Prints (212-421-3237, paceprints.com) and Pace/MacGill Gallery (212-759-7999, pacemacgill.com), which features Modern and contemporary photography. 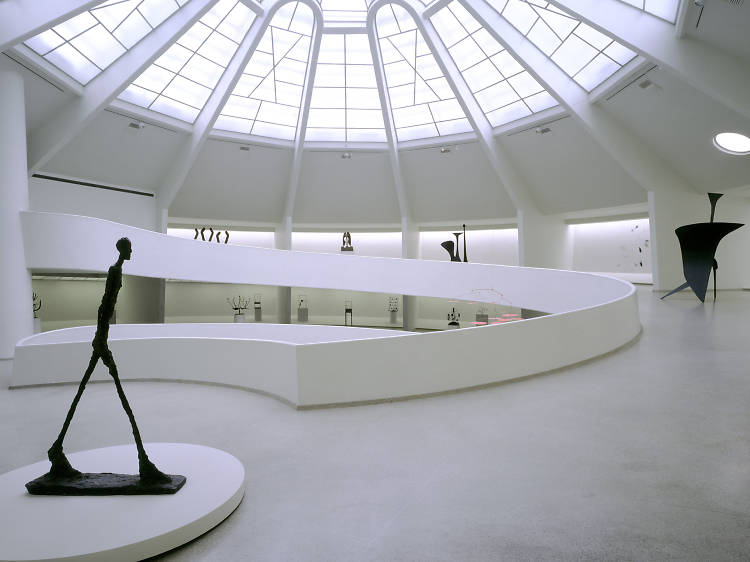 Museum mile is named for the stretch of Fifth Avenue between 82nd and 105th Streets that serves as the home for seven iconic New York institutions: The Metropolitan Museum Of Art, the Solomon R. Guggenheim Museum, Neue Galerie New York, The Jewish Museum, Cooper Hewitt, National Design Museum, the Museum Of The City Of New York and El Museo Del Barrio. It’s a lot to take in, but do try to visit them all.

Next, head up to Neue Galerie New York (1048 Fifth Ave, 212-628-6200, neuegalerie.org), which is devoted entirely to late-19th- and early-20th-century German and Austrian fine and decorative arts. Among its treasures: Gustav Klimt’s iconic portrait, Adele Bloch-Bauer I.

Keep heading north to the Solomon R. Guggenheim Museum (pictured; 1071 Fifth Ave, 212-423-3500, guggenheim.org), which of course was famously designed by Frank Lloyd Wright. The spiraling rotunda he created for its interior is a must see.

Speaking of design, make sure to check out the Cooper Hewitt (2 E 91st St, 212-849-8400, cooperhewitt.org), which is dedicated to design (both historic and modern), and is the only Smithsonian Museum in NYC.

Next stop: The Jewish Museum (1109 Fifth Ave, 212-423-3200, thejewishmuseum.org), which, in addition to celebrating Jewish culture, mounts important exhibitions of modern and contemporary art.

As its name suggests, the Museum Of The City Of New York (1220 Fifth Ave, 212-534-1672, mcny.org), isn’t an art museum per se. Rather it’s focused on Gotham and its history. But it’s worth a visit because it’s exhibitions often include examples of fine art and photography. 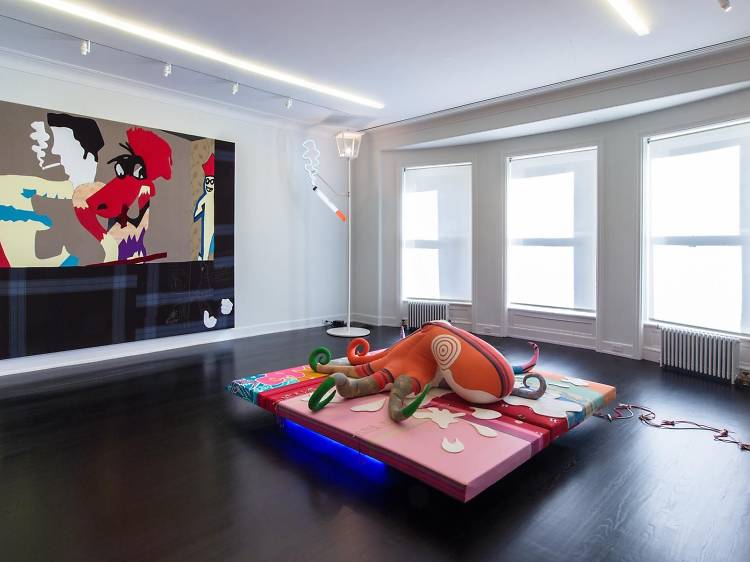 The Upper East Side is New York’s oldest gallery neighborhood and its charms are many. The spaces are usually located in elegant townhouses built at a time when being rich didn’t mean having to show off. Hence the rooms are intimately scaled, permitting you to get close up and personal with the work in a way that makes you feel like you are living with it. Quality and chic are the operative terms here. Most of the galleries are located in the East Sixties and Seventies just off Madison Avenue in either direction.

To start, take the 6 to Hunter College–68th Street and head to Petzel Gallery (pictured; 35 E 67th Street between Madison and Park Avenues, 212-680-9467, petzel.com), the uptown branch of long-time Chelsea dealer who reps such well regarded contemporary figures as Yael Bartana, Joyce Pensato and Dana Schutz. Next, head north to Hauser & Wirth (32 E 69th Street, between Madison and Park Avenues, 212-794-4970, hauserwirth.com), the powerhouse Swiss dealer who also has a space in Chelsea. And while you're at it, next door you'll find the UES outpost of another big Chelsea player, David Zwirner (34 East 69th Street, 212-201-0240, davidzwirner.com).

Your next stop is Michael Werner Gallery (4 E 77th Street between Fifth and Madison Avenues, 212-988-1623, michaelwerner.com), which exhibits such artists as Peter Doig, Sigmar Polke and Peter Saul. One block north, you’ll find the aptly named Half Gallery (43 E 78th Street and Madison Avenue, 212-744-0151, halfgallery.com). Brainchild of art impresario Bill Powers, Half Gallery often features the sort of provisional, idiosyncratic work you’d expect to find on the Lower East Side. Speaking of find, the gallery entrance is hard to locate: You need to enter the courtyard fronting the Cynthia Rowley boutique then look for an inconspicuous door on the left.

Your tour ends with that most Upper East Side-ish of Upper East Side spaces, Acquavella Galleries (18 E 79th Street between Fifth and Madison Avenues, 212-734-6300, acquavellagalleries.com). A family owned concern since the 1920s, Acquavella trades mainly in 19th and 20th-century heavyweights (Degas, Pissaro, Picasso, Bacon), but there are some contemporary artists (Miquel Barceló, Damien Loeb) surprisingly sprinkled into the mix. Every visit is a true New York art-viewing experience. 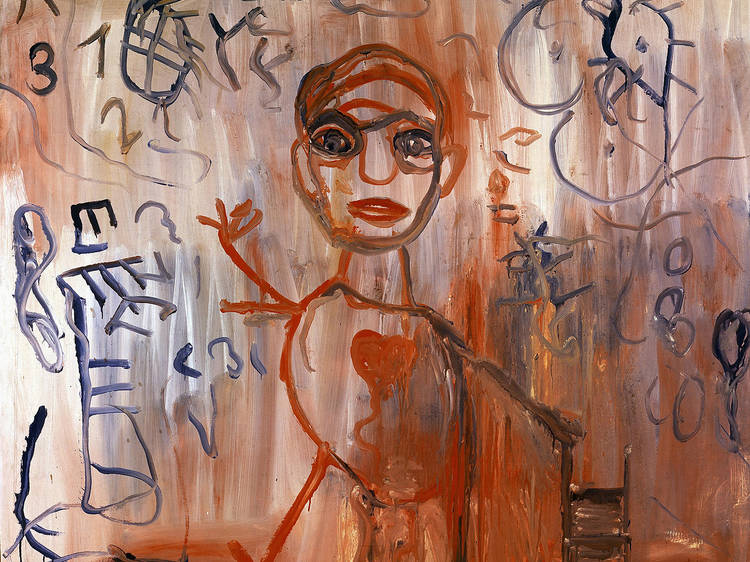 Check out our suggestions for the best art exhibitions you don't want to miss, including gallery openings and more