Upper East Side guide: The best of the neighborhood

Find the best restaurants, bars, shops, attractions and things to do on the Upper East Side of Manhattan.

Gorgeous prewar apartments owned by blue-blooded socialites, soigné restaurants frequented by Botoxed ladies who lunch, the deluxe boutiques of international designers.… This is the clichéd image of the Upper East Side, and you’ll certainly see a lot of supporting evidence on Fifth, Madison and Park Avenues. Recently, however, pockets of downtown cool have migrated north, notably the growing food-and-drink enclave pioneered by Earl’s Beer and Cheese.

Encouraged by the opening of Central Park in the late 1800s, affluent New Yorkers began building mansions along Fifth Avenue. By the start of the 20th century, even the superwealthy had warmed to the idea of giving up their large homes for smaller quarters, provided they were near the park, which resulted in the construction of many new apartment blocks and hotels. Working-class folk later settled around Second and Third Avenues, following construction of the defunct elevated East Side train line, but affluence remained the neighborhood’s dominant characteristic. Philanthropic gestures made by the moneyed classes over the past 130-odd years have helped to create the impressive cluster of art collections on Museum Mile—from 82nd to 105th Streets, Fifth Avenue is lined with more than half a dozen celebrated institutions, including theMetropolitan Museum of Art, the Solomon R. Guggenheim Museum and The Frick Collection.

Map of the Upper East Side and travel information 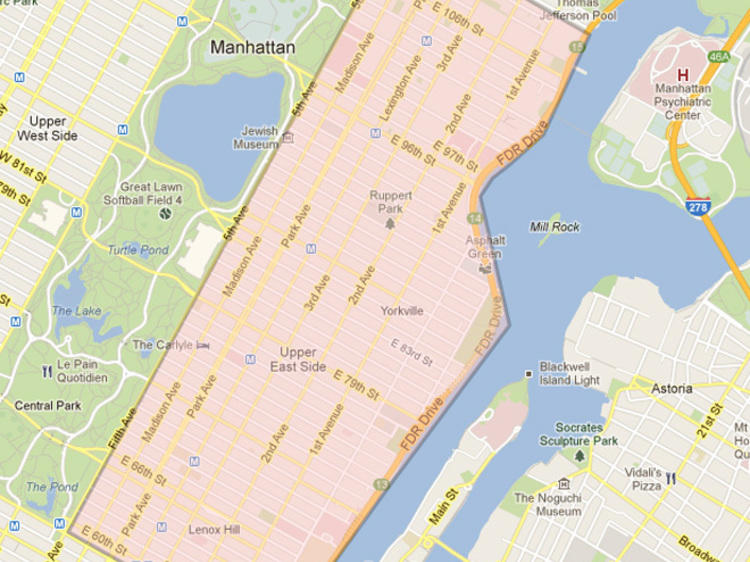 Restaurants on the Upper East Side 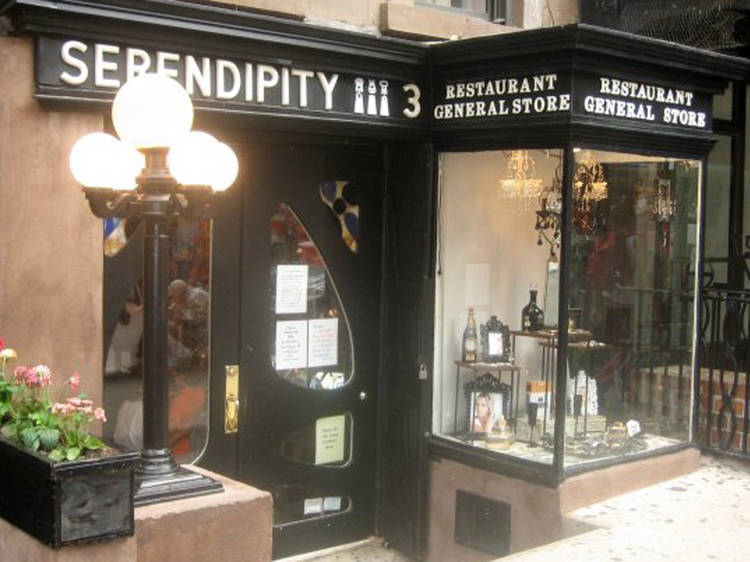 At this cheery, kitschy East Side family spot, sandwiches, salads and burgers merely set you up for the main course: dessert. The trademarked Frrrozen Hot Chocolate—a brain-freezing chocolate slushie—deserves its reputation; the massive beast should be shared. Given the size of the Coward’s Portion of the Outrageous Banana Split, we’re guessing the full-size version comes in a trough. 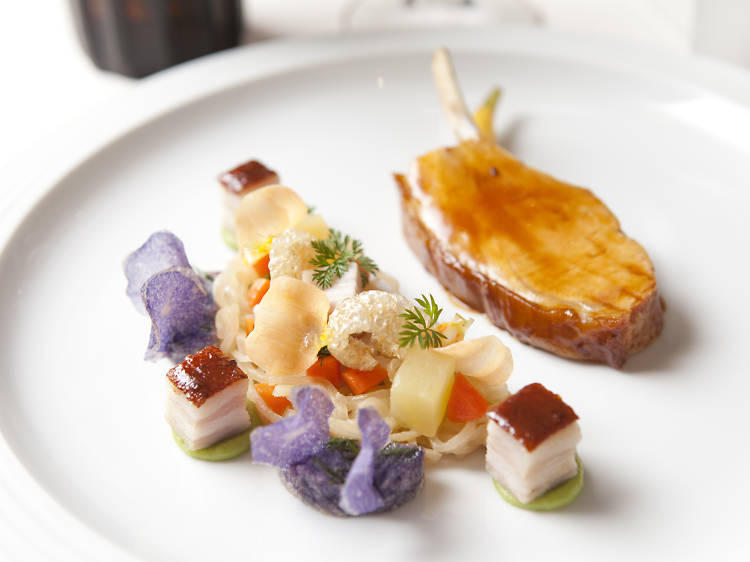 Even in the worst of times, a world-class city needs restaurants offering the escape of over-the-top coddling and luxurious food, with a star chef who's not just on the awning but in the kitchen and dining room, too-—in short, a place like Daniel. The most classically opulent of the city's rarefied restaurants, Daniel Boulud's 15-year-old flagship emerged from a face-lift last fall, looking about as youthful as a restaurant in a landmark Park Avenue building realistically can. The sprawling dining room no longer resembles the doge's palace in Venice. Instead it's been brought into the 21st century with white walls, contemporary wrought iron sconces and a centerpiece bookshelf lined with vibrant crystal vases among other curios. The redesign, by longtime Boulud collaborator Adam Tihany, couldn't have come at a better time. With even neighborhood regulars keeping an eye on their budgets, now more than ever the place needs to cultivate a new clientele. Despite Boulud's ever-expanding reach—he'll soon launch his tenth restaurant, on the Bowery—the chef still prowls the dining room here most nights, charming fans and sending extras to his special guests. While the setting has been revamped, the food—overseen since 2004 by executive chef Jean Franois Bruel—hasn't taken a radical turn. Still, presentations overall seemed much more up-to-date. The tiered silver tower cradling an overkill of miniature bites that used to kick off a meal has given way to a less-is-more amuse-bouche on a 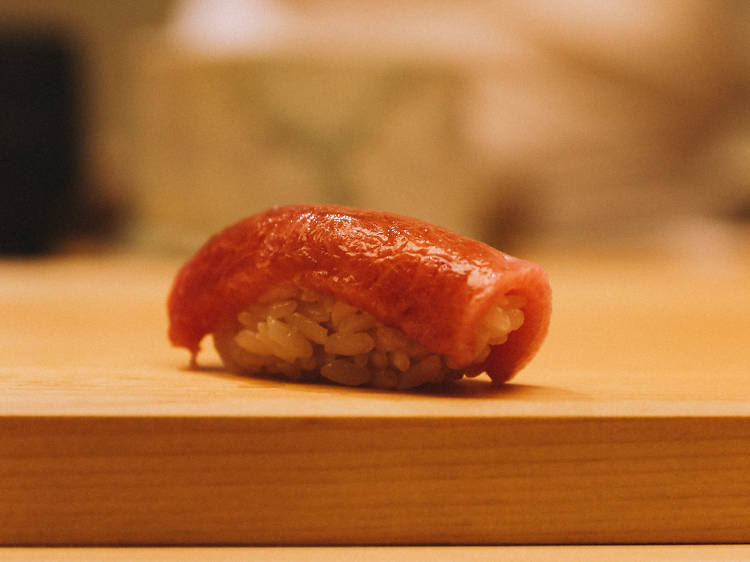 It's difficult to impress as a sushi restaurant in a city full of competitors luring in customers with fresh seafood. But at this Upper East Side restaurant, the $300-a-person, edomae-style sushi joint is one of the priciest in the city that actually backs up its hefty price tag. But the Michelin star and ancient aging techniques from chef Abe Nozomu makes the wallet-gouging bill worth it. 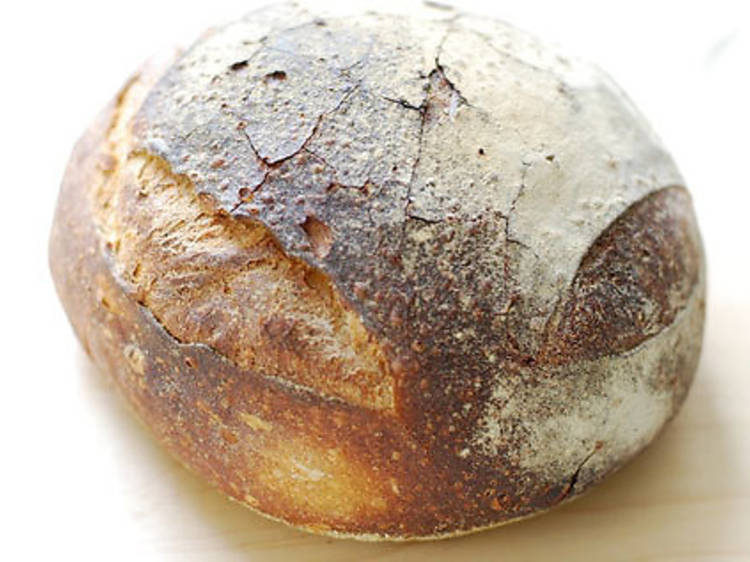 When Keith Cohen bought this bakery from its founding owners a few years back, he wanted to expand on the century-old kosher spot’s old-world reputation by producing cutting-edge artisan breads. While he still makes Orwasher’s famous Jewish rye, Cohen has remodeled the tiled-floor shop into a sunlit café, and now sells crusty European-style loaves and rustic “Artisan Wine” bread made with natural yeasts found on the grapes at Long Island’s Channing Daughters Winery.

Museums on the Upper East Side 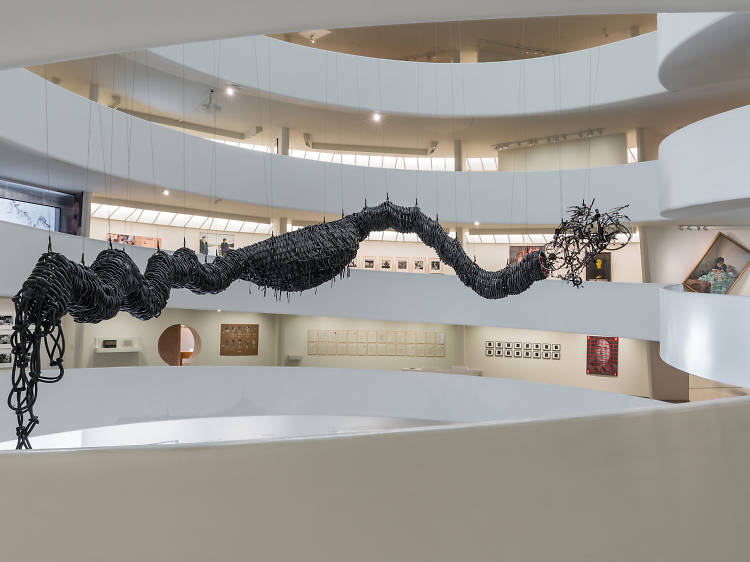 While the Guggenheim’s collection of modern art works is certainly impressive, it is impossible to separate the museum’s contents from its form with architect Frank Lloyd Wright’s brilliant and controversial design. Opened in 1959 on Fifth Ave across from Central Park, just months after Wright’s death, the concrete inverted ziggernaut (a Babylonian step pyramid), stomped on the expectations and tradition of clean square galleries exemplified and cherished by the neighboring Upper East Side museums, like the nearby Metropolitan Museum. Instead Wright combined his use of geometric shapes and nature, to create a gallery space that presented art along a flowing, winding spiral, much like a nautilus shell, with little in the way of walls to separate artists, ideas or time periods. Best experienced as Wright intended by taking the elevator to the top of the museum and following the gentle slope down, the art is revealed at different angles along the descent and across the open circular rotunda in a way that even the most well known Monet landscape might seem like a revelation. This unusual, bold way of approaching art, both as it is displayed and viewed, has inspired spectacular exhibits by highly-conceptual contemporary artists such as a series of films by Matthew Barney and hundred of Maurizio Cattelan's sculptures hanging from the ceiling. Considering the steep price of admission ($25, students and seniors $18, children under 12 free), make sure to take a break from the captivat 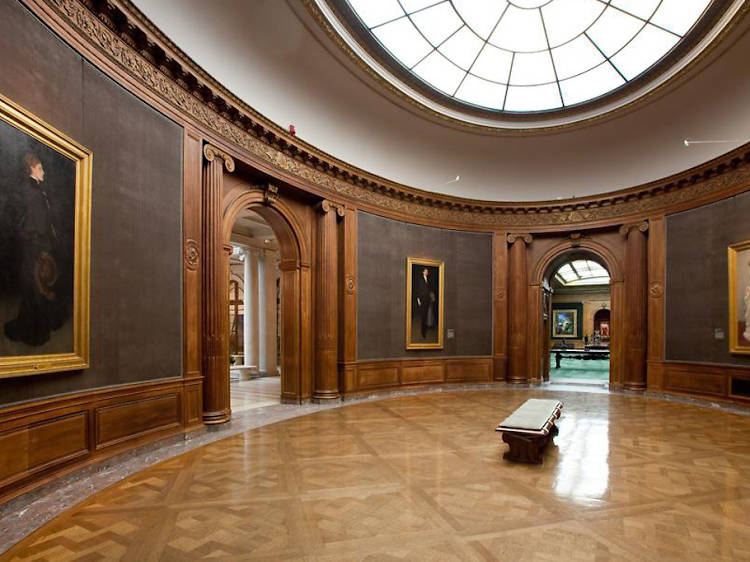 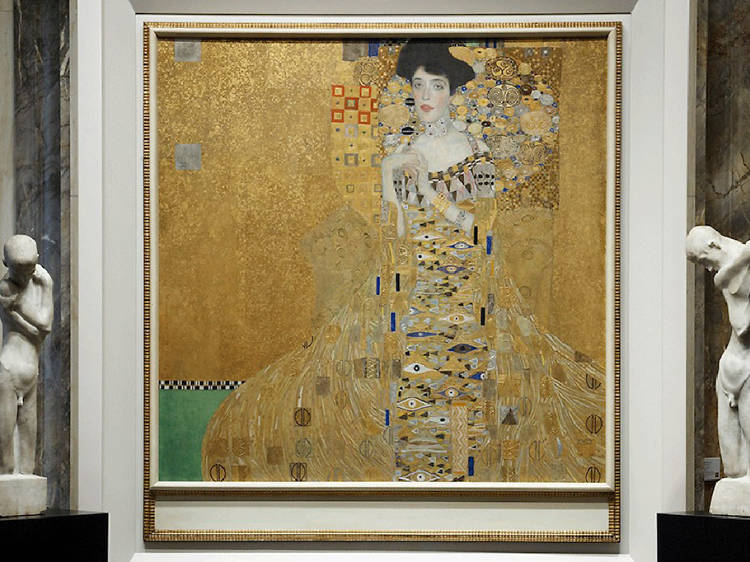 This elegant addition to the city’s museum scene is devoted entirely to late-19th- and early-20th-century German and Austrian fine and decorative arts. Located in a renovated brick-and-limestone mansion that was built by the architects of the New York Public Library, this brainchild of the late art dealer Serge Sabarsky and cosmetics mogul Ronald S. Lauder has the largest concentration of works by Gustav Klimt (including his iconic Adele Bloch-Bauer I) and Egon Schiele outside Vienna. You’ll also find a bookstore, a chic (and expensive) design shop and the Old World–inspired Café Sabarsky, serving updated Austrian cuisine and ravishing Viennese pastries. 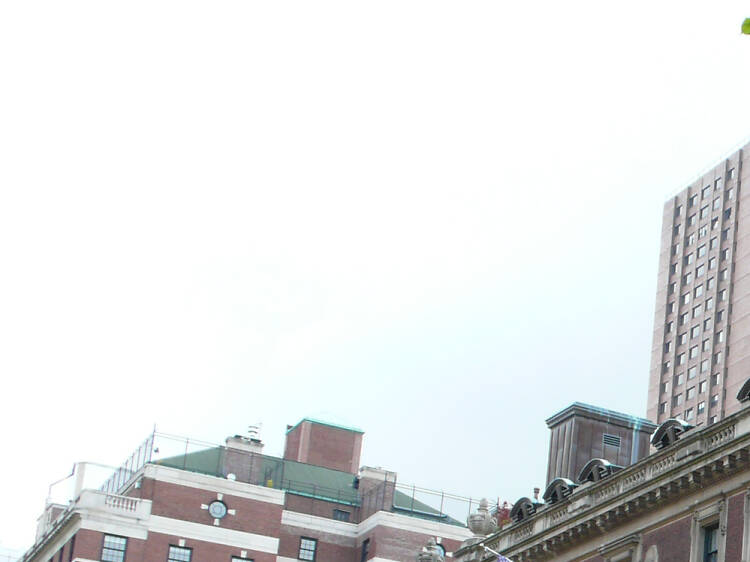 Founded in 1897 by the Hewitt sisters, granddaughters of industrialist Peter Cooper, the only museum in the U.S. solely dedicated to design (both historic and modern) has been part of the Smithsonian since the 1960s. The museum hosts periodic interactive family programs that allow children to experiment with design.

Bars on the Upper East Side 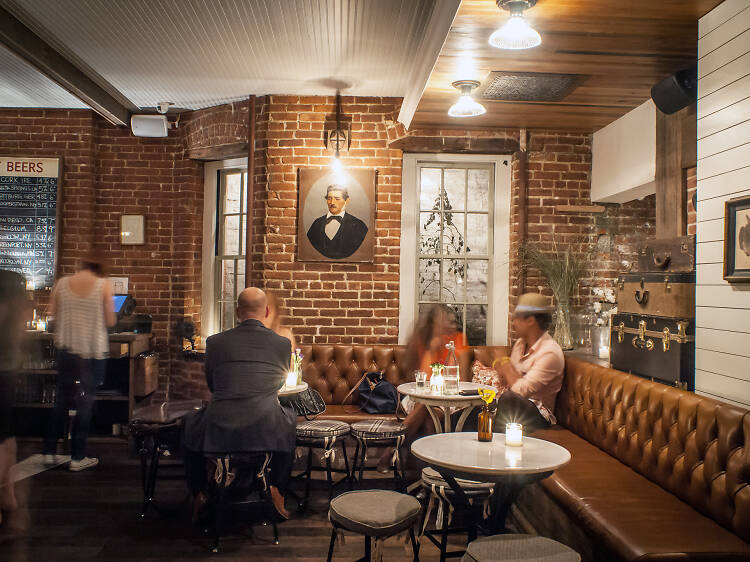 The Penrose—named for a neighborhood in Cork, Ireland, where two of the owners grew up—brings a bit of the indie-chic East Village to Gossip Girl territory. Operated by the gastropub specialists behind the Wren and Wilfie & Nell, the joint would be run-of-the-mill farther downtown, where the trifecta of reclaimed wood, craft pours and pedigreed pub grub long ago joined the ranks of food-world clichés, but it’s a welcome change up here. 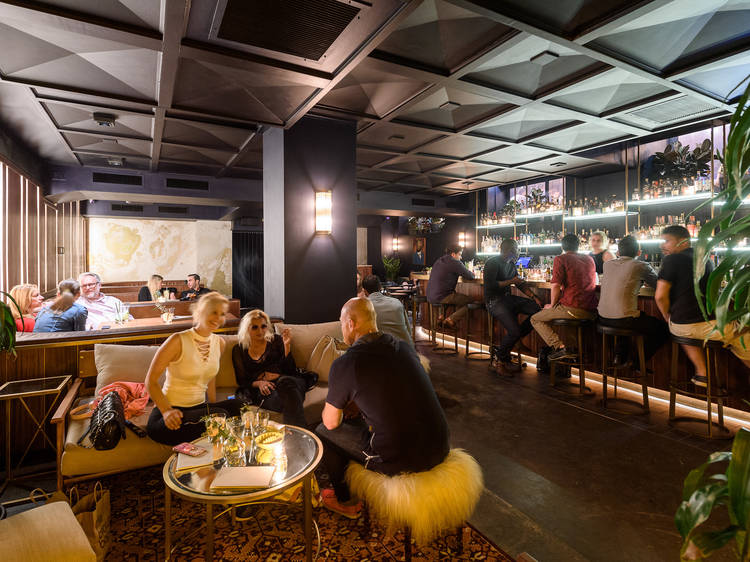 Tucked away on an aggressively average block in the doorman-less part of the Upper East Side, a set of red-velvet ropes leads to a heavy black door. The underground speakeasy seems like a seductive bachelor pad from the 1960s, where the attentive staff serves gussied-up drinks for the parties of overlapping limbs and fused-together faces. 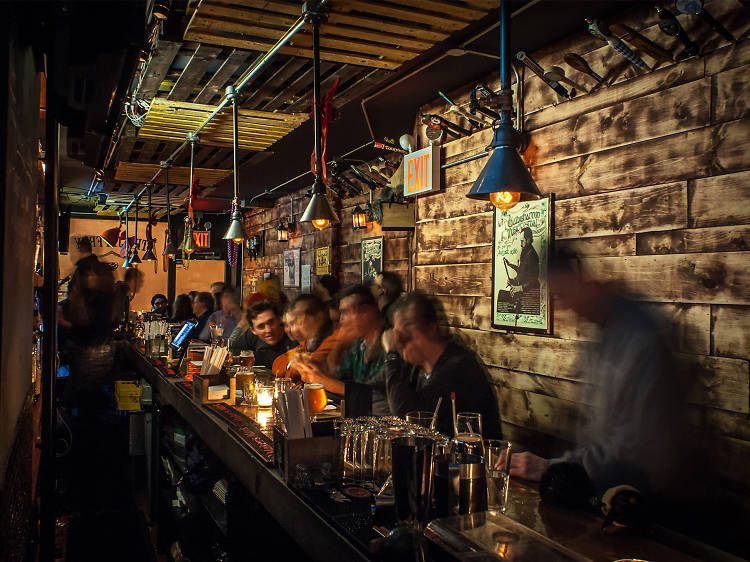 The Alewife team opened this Upper East Side hangout. A custom draft system for the beer controls the pressure for optimal fizz. To pad the boozing, the chef will dole out elevated bar snacks, while keg pallets and lighting fixtures fashioned from plumbing parts decorate the space, including a 65-seat biergarten. 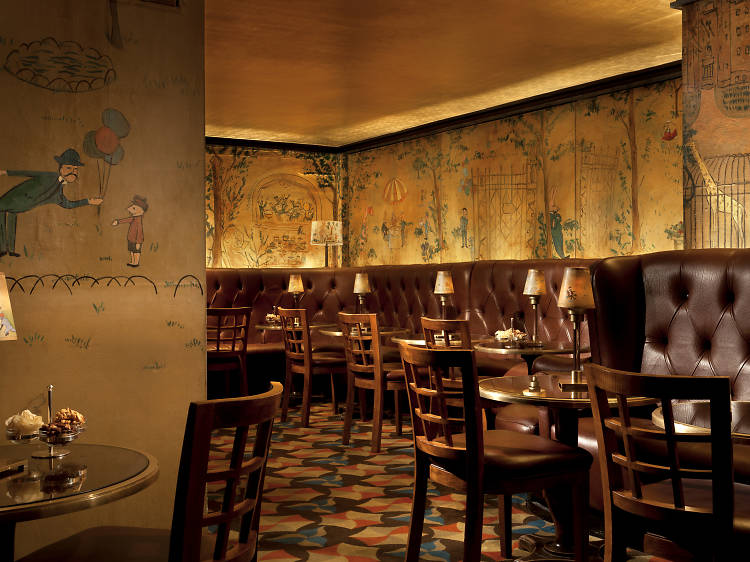 Choice acts keep New York’s most dapper nightspot on the map, while the steep cover charge and white-jacketed service makes sure riffraff doesn’t scuff up the bar’s most valued draw: original Ludwig Bemelmans murals. Not to be missed, spiffy (and pricey) cocktails preserve the bar’s classic character.

Read more
See more bars on the Upper East Side

Shops on the Upper East Side 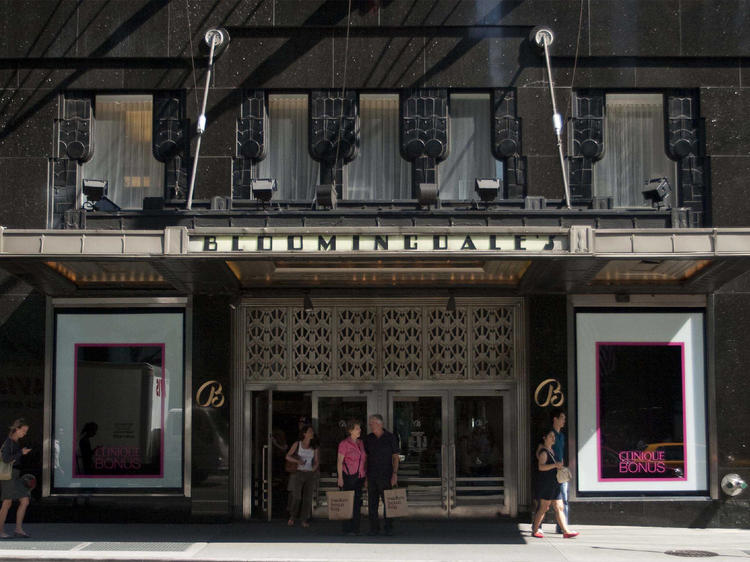 Ranking among the city’s top tourist attractions, Bloomie’s is stocked with everything from bags to beauty products, homewares to designer duds. The cosmetics hall, complete with an outpost of globe-spanning apothecary Space NK and a Bumble and bumble dry-styling bar, recently got a glam makeover. The compact Soho outpost concentrates on young fashion and cosmetics. 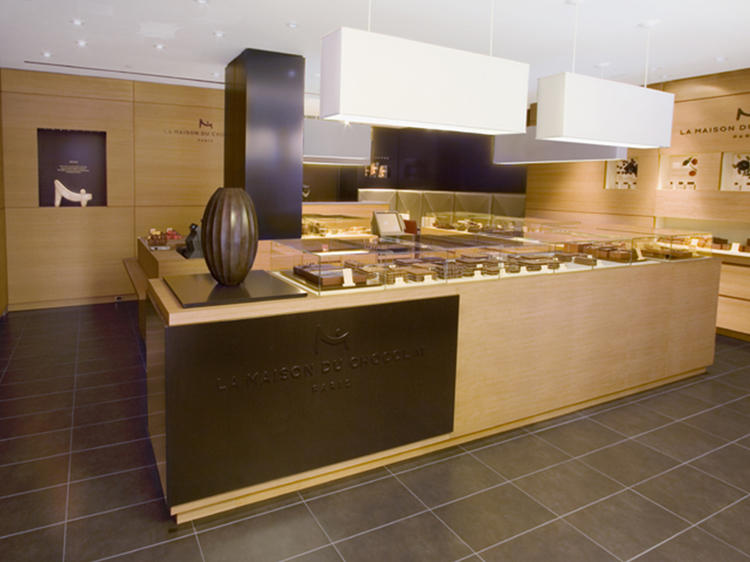 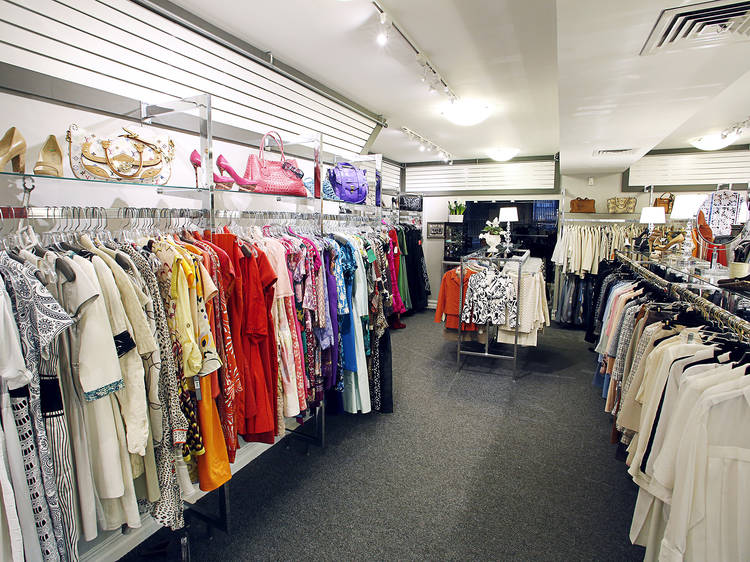 Michael’s, The Consignment Shop for Women

This UES family-owned shop has been in the haute couture–recycling business since 1954 and is the place to go if you want to score Dior, Prada and Dolce & Gabbana dresses for 70 to 90 percent off retail price. While you shouldn’t schlep your bags of less-than-luxe stuff here expecting a trade (they only buy first-tier designer labels that are less than two years old and in great condition), come here if you want to treat yourself to something luxurious without breaking the bank. 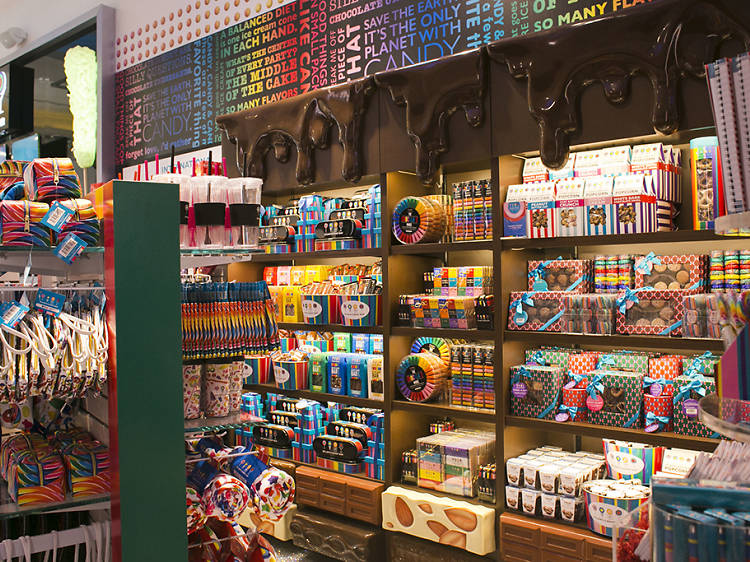 Choose from a variety of sweet packages, or build your own party. Packages for children ages three and up include invitations, candy decorations, balloons, paper supplies, pizza, beverages, cake, games, crafts and party favors. The Sugar Babies package, for babes celebrating their first birthday, includes everything in the basic package as well as a photographer, a cotton candy machine, an entertainer and courier service for gift delivery. Call for pricing.