The 10 best gay musicals of all time

Gay-themed Broadway musicals have come a long way in the past fifty years. Here is our ranking of the very best.

It is no secret that many LGBTQ+ people have a special affinity for Broadway musicals. "Keep it gay!" sings the flamboyant director in The Producers, and musical theater has long drawn nonstraight folks to the ranks of its creators, performers and fans. But it is only in the past fifty years or so that tuners have actually featured openly gay characters onstage—and the result has been some of the best Broadway shows of all time. Here is our list of the top musicals with strong gay themes, ranked for their combination of quality, historical importance and LGBTQ+ content. We've limited the list to ten, which means that some very good shows did not quite make the cut. But there's an awful lot here to be proud of. 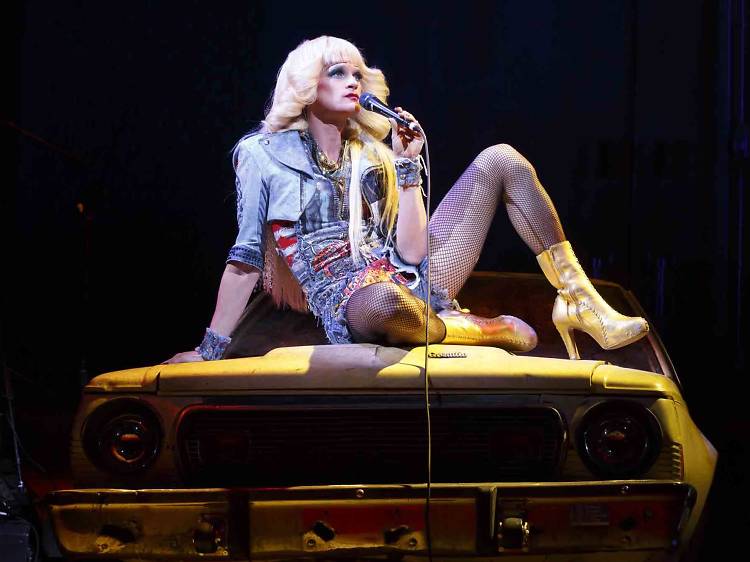 More than two decades after it blasted onstage at the Hotel Riverview in Greenwich Village, Hedwig and the Angry Inch retains its electric currency. Presented in the form of a concert by a defiantly vulnerable East German glam rocker named Hedwig—who landed in Middle America after a botched sex-change operation—the show has a wham-bam score by Stephen Trask (drawing on the sounds of ‘70s rockers like Lou Reed and David Bowie) and a witty, pained book by John Cameron Mitchell, who originated the title role (and took it over from Neil Patrick Harris in the musical’s 2014 Broadway revival). A headlong blast of queer energy, Hedwig is the ultimate antibinary musical, dissolving boundaries—between male and female, cis and trans, rock and roll and musical theater—in a messy, cathartic and ultimately joyful public struggle with questions of acceptance, control and self-love. 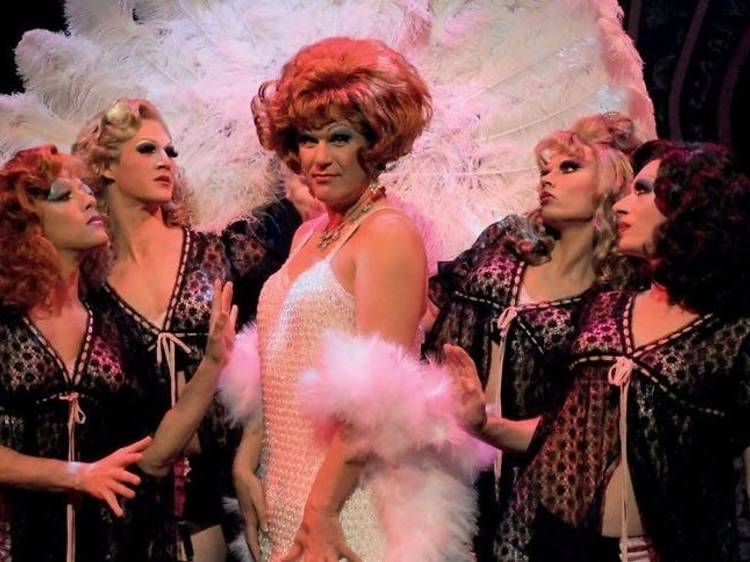 The first Broadway musical to put gay characters center stage, La Cage Aux Folles is the fairy godmother of LGBTQ+ musical theater. Adapted by Harvey Fierstein from a French stage comedy and film, La Cage depicts the lovingly tempestuous relationship between the manager and star of a Saint-Tropez nightclub that specializes in glitzy drag shows. If this same-sex central romance broke new ground, however, the show’s score—by show-tune master Jerry Herman (Hello, Dolly!)—wears its classic Broadway sound like a sash of honor, from the opening parade of cross-dressed beauties to drag queen Zaza’s first-act finale (and instant gay-pride anthem) “I Am What I Am” through the celebratory “The Best of Times.” Revived on Broadway in 2004 and 2010, the old girl has held up surprisingly well as a modern twist on nostalgia. Tuneful, touching, tacky and bedazzling, La Cage aux Folles is what it is, and what it is is a sensation. 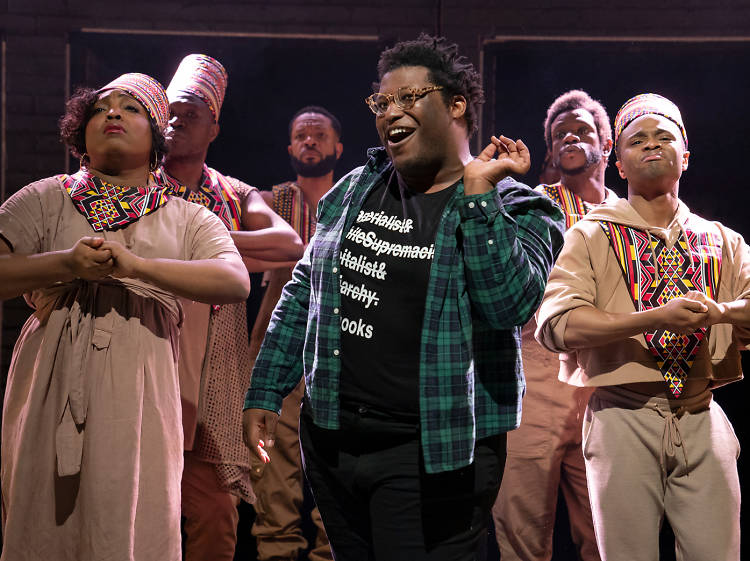 Musical-theater auteur Michael R. Jackson turns himself inside out in this shatteringly honest metamusical about queer Black identity, which premiered Off Broadway at Playwrights Horizons and won the 2020 Pulitzer Prize for Drama. Jackson’s wide-ranging intravaganza takes a deep dive, often barely coming up for breath, into a whirlpool of ambition and frustration as his alter ego—a would-be musical dramatist named Usher—struggles to define himself in a maelstrom of sex, race, family, body shame, religion and entertainment. The theater shutdown of 2020 may have denied A Strange Loop the speedy Broadway transfer it deserved, but hopefully there will soon be space on the Great White Way for this challenging, exhilarating tour de force. 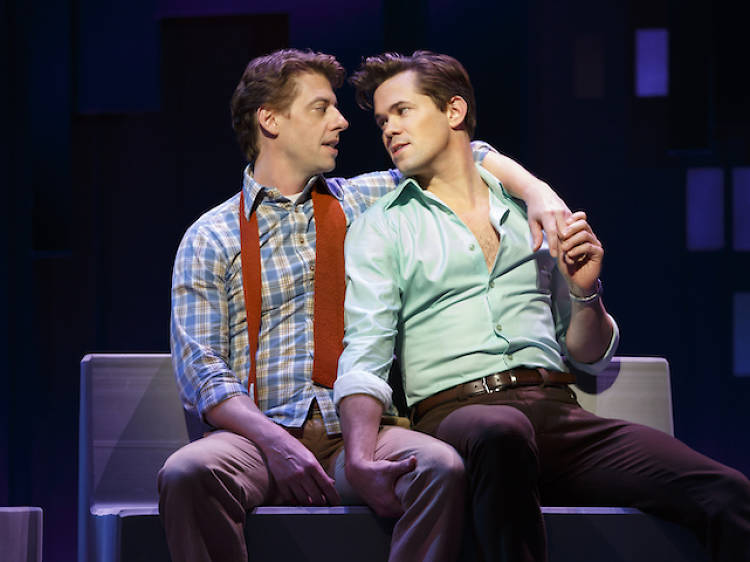 Few musicals have the idiosyncrasy and punch of William Finn and James Lapine’s intimate, obstinate, heartbreaking 1992 musical (revived in 2016) about a middle-class Jewish man who leaves his wife and son for a male lover in the early 1980s. The first half, which premiered in 1981 as the one-act March of the Falsettos, is a jagged, yappy exploration of toxic masculinity; the extraordinary second half, written as Falsettoland in 1990, concerns the more literal toxicity of HIV. Finn rises to the challenge of the subject matter with a tremendously moving collection of songs: sparky, wrenching and sweetly romantic, with frequent enough twists of melody and phrase to resist the maudlin. As the show’s fractured blended family comes together in the face of grief, Falsettos guides us through a scarred but healing depiction of collective loss and purpose. 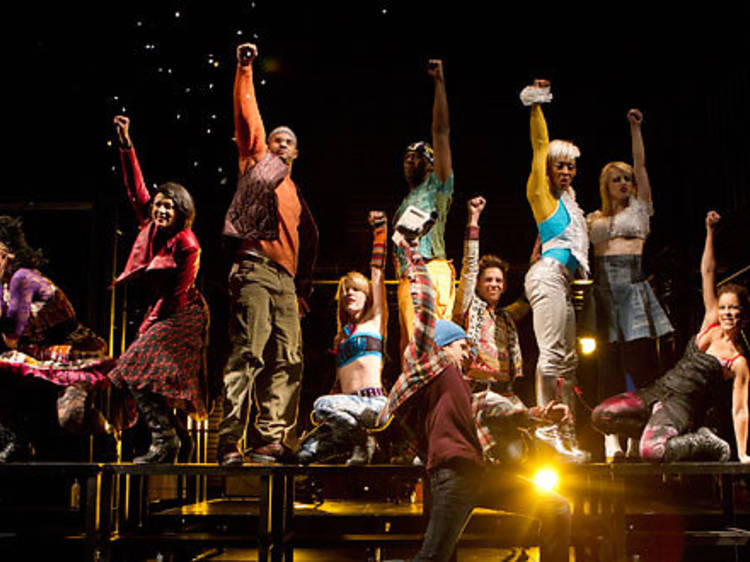 The defining Broadway musical of the 1990s, Jonathan Larson’s Rent reshapes the Puccini opera La Bohème into a passionate rock-pop tableau of creative artists in the East Village, and its generous field of vision created space for a pointedly diverse dramatis personae: Of the eight main characters, half are LGBTQ+, at least half are living with HIV, and a majority are usually cast as nonwhite. Although Larson’s tragic death on the eve of the show’s 1996 premiere at New York Theatre Workshop left the show unpolished in places, Rent became a sensation, winning a Pulitzer and transferring to Broadway for a 12-year run. While the musical includes moments of overt activism (“ACT UP! Fight AIDS!”), it’s the show’s overall embrace of unity and community—“Measure your life in love!,” urges the soloist in the soulful showstopper “Seasons of Love”—that resonates most powerfully 25 years later. 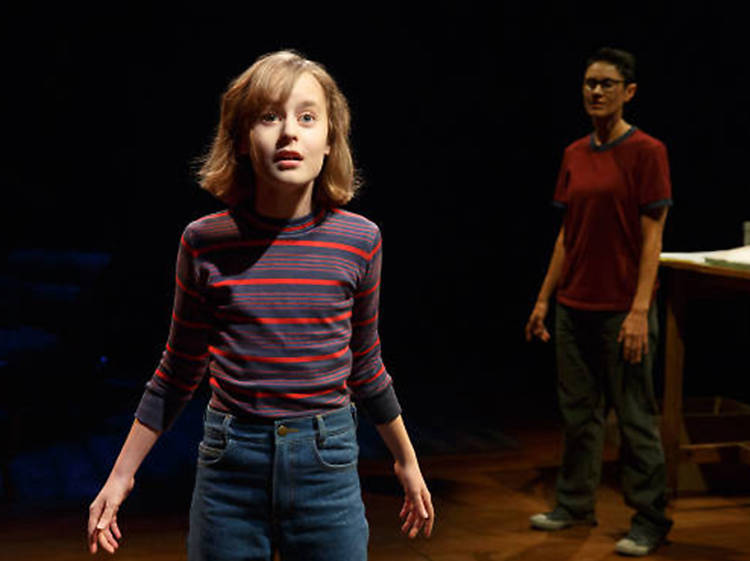 Alison Bechdel is a cartoonist: It’s her job to fit stories into boxes. But her own life story resists easy lines. In Fun Home, the fluid memory-play musical adapted from Bechdel’s illustrated memoir, Lisa Kron’s poignant libretto and Jeanine Tesori’s expressive music unite to make lesbian identity legible onstage as it has never been before, as three actors play Alison at evolutionary stages of dykedom: as a young tomboy, a neurotic college student and a grown-up butch. At the core of the story is her relationship with her fussy, controlling father, whose tormented and closeted homosexuality drives him down dark paths. The end result, which moved from the Public to Broadway and won the Tony for Best Musical, is a strikingly intelligent and sensitive show that is not afraid to think outside the musical-theater box. 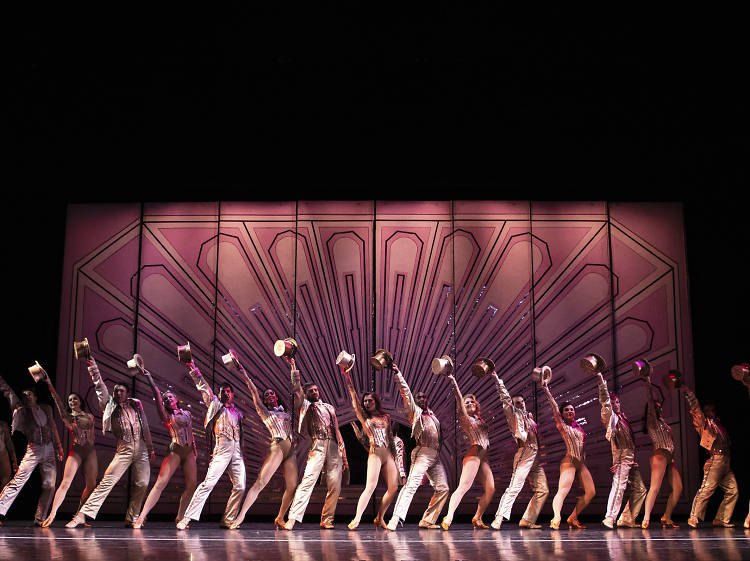 Broadway began moving toward gay visibility in the post-Stonewall era—the gay-bar scene in Applause, Tommy Tune taking a long step forward in Seesaw—but it was 1975’s A Chorus Line that blew the closet door off its hinges. The definition of an ensemble show, director-choreographer Michael Bennett’s psychological group portrait of Broadway dancers pulls back the curtain on the audition process for a Broadway musical. Several of the auditioners are gay, and Paul—a character modeled on Nicholas Dante (who cowrote the show’s book with James Kirkwood Jr.)—is given one of the show’s only two solo spots onstage: an emotional monologue about his traumatic childhood. A Chorus Line won a Pulitzer and ran for a record-breaking 15 years, and its message came through loud and clear: Not just that there were gay people on Broadway, but that there had been gay people on Broadway all along, kicking up their heels right under our noses. 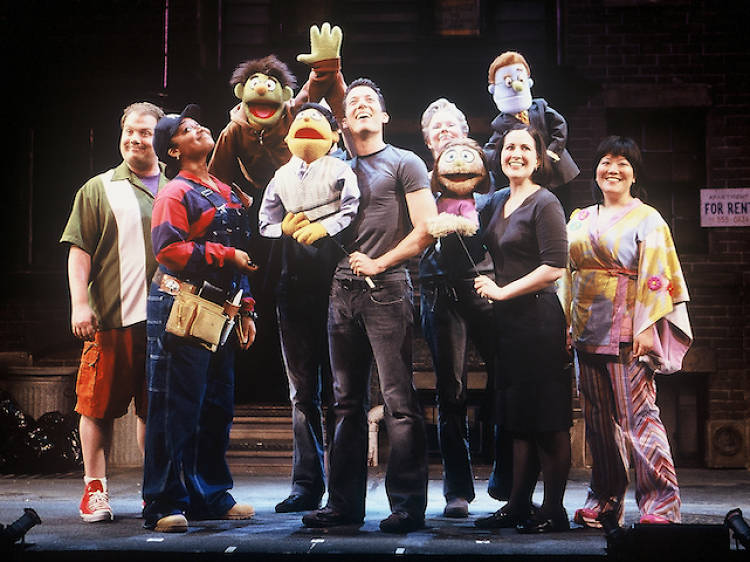 When musical comedy returned to Broadway in the 21st century, one of the shows leading the charge was Avenue Q, which cheekily used Sesame Street–style puppets to depict an outer-borough community grappling with life lessons about such grown-up topics as hookups, racism and Internet porn. Book writer Jeff Whitty and co-composer Jeff Marx—joined by future double-EGOT winner Robert Lopez—bring a recognizably modern gay sensibility to the show, as exemplified by the characters of Nicky and Rod, Avenue Q’s take on Sesame Street’s resident odd couple, Ernie and Bert. The closeted Rod is in love with the straight (but very supportive!) Nicky, and their arc is both funny and touching. A surprise hit, the musical ran on Broadway for five years after its premiere at the cozy Vineyard Theatre, then returned Off Broadway to run another 10 years at New World Stages. Like Rent, Avenue Q helped create a world in which LGBT characters are woven into the neighborhood. 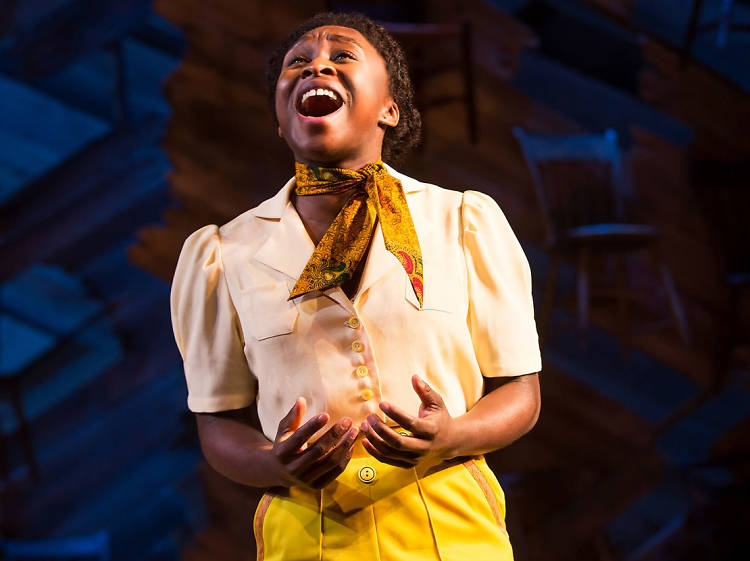 When The Color Purple premiered on Broadway in 2005, the beautiful central journey of its main character, Miss Celie, got somewhat lost in an oversize production that cautiously downplayed Celie’s same-sex love affair with the paramour of her abusive husband. But that central aspect of Alice Walker’s 1982 novel—as adapted by playwright Marsha Norman and a team of three pop songwriters—emerged more clearly in the musical’s smaller-scaled 2015 revival, which intensified The Color Purple to bring out its deeper hues. As performed by the exceptional Cynthia Erivo, the show’s eleven-o’clock number, “I’m Here,” brought audiences to their feet every night. After years of harrowing adversity, Celie finally comes to peace with herself, and the effect is overwhelming: The clouds lift and a rainbow shines out. 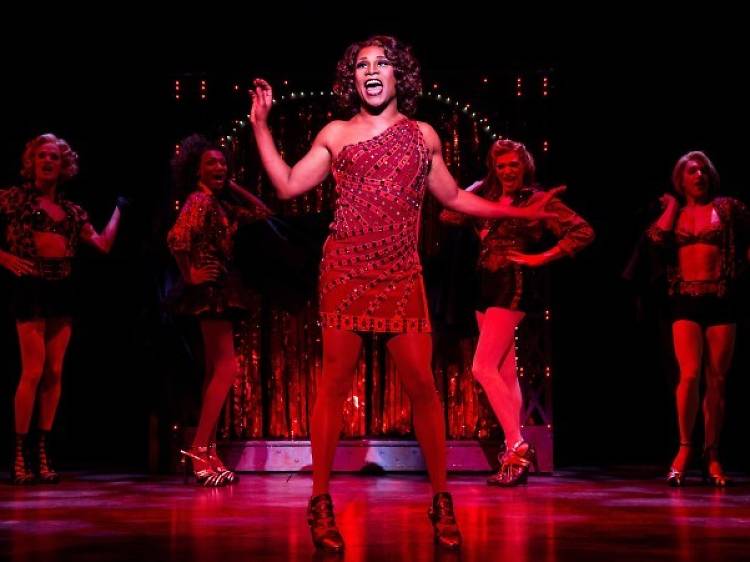 Adapted from a 2005 English indie film, Harvey Fierstein and Cyndi Lauper’s fizzy pop crowd-pleaser Kinky Boots tells of a struggling footwear factory rescued by a self-possessed drag queen—originally played by Billy Porter, in the role that finally made him a star—with ideas for a niche product line of outré boots. (Gay style and consumer dollars to the rescue! The shoe must go on!) Cobbled together from pieces of The Full Monty, Billy Elliot, Hairspray and Fierstein’s own La Cage aux Folles, the musical feels familiar at every step, but its solid craftsmanship launched it to a six-year Broadway run that helped ease mainstream audiences into a comfortable fit with with messages of individuality, community, pride and acceptance. 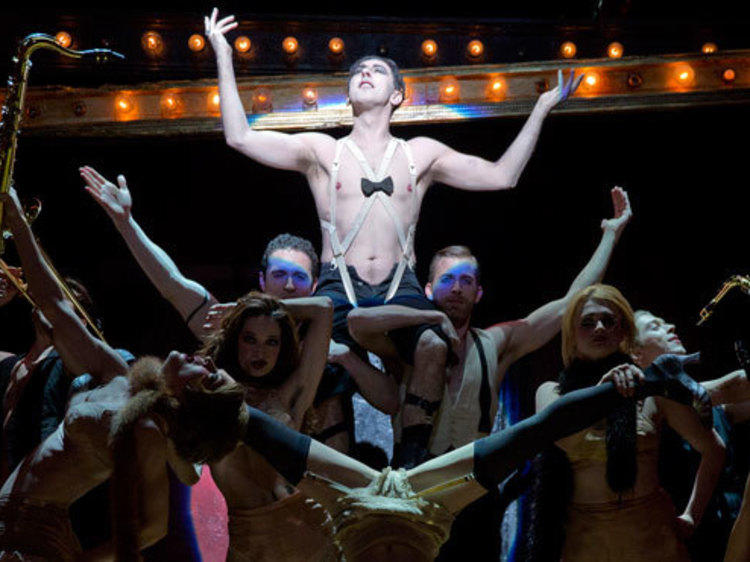 Cabaret’s unusual evolution gives it a special place on this list, as its relationship to gay content has been in a continual state of flux. The original 1966 version of this portrait of German life in the early 1930s—with a book by Joe Masteroff and a classic score by John Kander and Fred Ebb—scrubbed the gayness from its source material, Christopher Isherwood's 1939 novella Goodbye to Berlin. After Bob Fosse made the central character bisexual in his superb 1972 film version, however, revivals of the show rewrote him as nonstraight—and the transformative 1998 Broadway production, which returned to Broadway in 2014, upped the ante by making the malign Emcee of the seedy Kit Kat Klub explicitly queer as well. Even in its newest form, Cabaret is hardly a Gay Pride show (despite the title song’s paean to a hard-partying Chelsea queen); its queer elements largely function as decadence, irony or obstacle. But not every depiction of LGBT people needs to make us feel good about ourselves. Cabaret is one of the great accomplishments in musical-theater history, and half a century after its premiere it still has the power to shake us to the bones.