Given the tight quarters most of us have to live in, it’s pretty darn amazing some of us we can still fill our apartments with what we’re obsessed with. Just take a look at these pads, which are all filled with New Yorkers’ passions, from dolls and morbid curiosities to sneakers and plants. They’re cool enough to make even those of us with micro apartments want to start a collection. Need more inspiration? Check out these awesome Airbnb Brooklyn rentals (and book one if you’re in need of a staycation).

Growing up, Suresh Seneviratne wasn’t a collector. But one cold winter day, the designer of bow-tie line Suresh New York found the City Shopper Barbie at Kmart. “My entire childhood came rushing back to me,” he says. “From the moment I took that doll out of the box I was reminded of how creative I am, how much I have to offer, how much I love fashion.” Now Seneviratne lives in Gowanus with his partner and an ever-evolving collection of about 60 fashion dolls—including his favorite, the Delphine Silkstone doll, an ode to the height of couture fashion. You can watch him share tips and tricks on his YouTube channel, Suresh NY, a beloved resource for the doll-collecting community. “That, to me, has been the most awesome part of this collection: the people I’ve met and the way that I’ve been able to encourage young people to just be themselves.”

“I was born into it,” says sneaker collector Terrel Marcus, who fell in love with Nike while growing up in the Soundview Houses in the Bronx. And even though he’s pared down his collection to about 300 pairs—taking up an entire room of his pad—he’s so influential that he’s inspired not one but two fake Instagram accounts. (You can find the real deal by visiting @tmarkgotkickss.) But collecting sneakers isn’t just about look-at-me bragging rights—wearing his black cement Air Jordan 3s to his wedding notwithstanding—but also about doing something good. In recent months the shoe fanatic partnered with NBA and WNBA stars to donate shoes to those affected by the hurricanes in Houston and Puerto Rico as well as to students in New York public schools. “I know all of this stuff can be gone tomorrow,” Marcus says. “If I’m driving and I see somebody with no shoes, if I have their size, I’ll just give them a pair out of my trunk.”

“I am a legitimate professional weirdo,” says Ryan Matthew Cohn. You won’t hear us argue. The artist turned a lifelong obsession with the unusual into a thriving career; he’s the curator behind such projects as the 19th-century anatomical wax museum at Brooklyn’s House of Wax. Ryan, whose mug you may recognize from the TV show Oddities or whose killer goods you might have seen if you’ve dropped into the roving, cult-favorite Oddities Flea Market (Brooklyn Bazaar, 150 Greenpoint Ave; Sat 2, Sun 3; $5), lives with his wife and creative partner, Regina Marie Cohn, in a 1,000-square-foot Greenpoint abode jam-packed with “thousands” of skeletons and other curiosities—including a stuffed dog and a life-size wax model of the human body. While it may sound like the stuff of nightmares for some, for the Cohns, who met when Regina tried to buy a skull from Ryan (aw!), it’s simply home. “I feel very comfortable here. Maybe somebody else walking through my house sees a pickled finger and gets a little bit squeamish,” says Ryan. “I don’t think anyone’s gone running for the hills—yet.”

“Sustainability is the thread that carries all of the things I do professionally,” says Summer Rayne Oakes, an entrepreneur and author. And she means it. It’s a philosophy she lives by, as a whopping 700 houseplants—mainly philodendron and peperomia—wind their way through her sunny 1,200-square-foot Williamsburg loft, climbing up the bricks and cascading over a vertical garden. “They’ve made my home very much their home as well,” says Oakes, who is currently writing a book about—you guessed it—plants. When she’s not tending to her own collection, she frequents the city’s community gardens and then shares what she’s learned on her YouTube series, Plant One on Me. But at the end of the day, it’s this (very) green house that’s her sanctuary in the urban jungle. “When people enter my home, it looks like they’ve just breathed for the first time.”

Need to get from point A to point B? 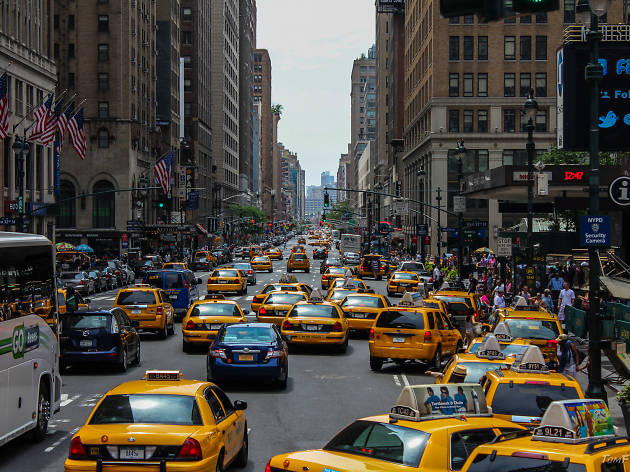 These are the best transportation apps in NYC, whether you want the cheapest ride possible or classic yellow cabs