The most interesting building names in NYC 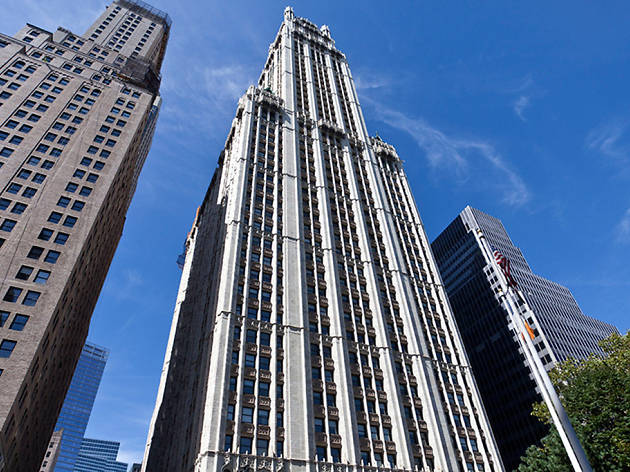 Although Woolworth’s department stores are no longer around, there’s one location that’s a living reminder of this five-and-dime’s legacy. Standing opposite City Hall Park, the Woolworth Building was commissioned by Frank W. Woolworth as the sight of his chain’s headquarters—and as a visual branding tool of the time. Opened in April 1913, it was the tallest skyscraper in the world for 17 years. Designed by architect Cass Gilbert, this neo-Gothic building’s silhouette draws upon the medieval belfries and city halls that Woolworth saw on a trip to Belgium, with motifs drawn from French and English cathedrals. The building is privately owned, but tours of its stunning interior are available. 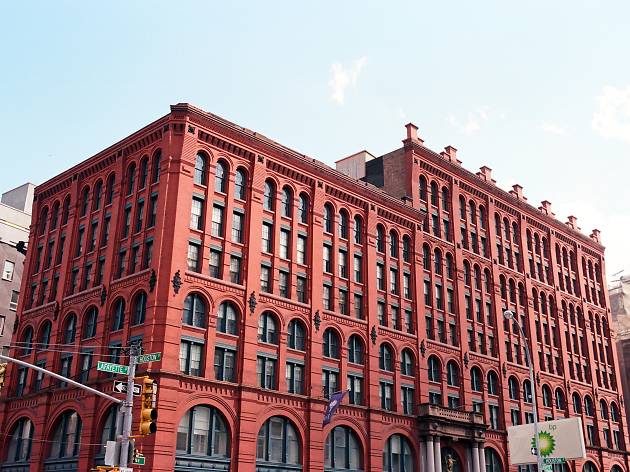 What gets your attention at this red-brick Nolita building is the two gilded statues of Puck, the trickster imp from Shakespeare’s A Midsummer Night’s Dream. Yet the character’s link to this building is more than figurative; he was the mascot for a late 19th- to early 20th-century satirical humor publication of the same name that set up production here until folding in 1918. Other printing and publishing companies would occupy the Puck Building over time—SPY Magazine, among others—but nowadays it’s full of office and retail spaces. There are also six lavish penthouses, developed by Kushner Companies, sitting atop this building. 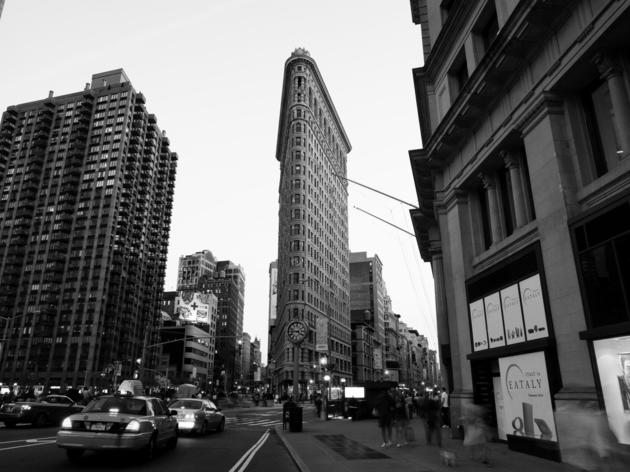 Of course, its distinctive shape stands out, but there’s more to the story of this centerpiece near Madison Square Park, now mainly used for office space. Completed in 1902, the Flatiron Building was built upon a triangular plot of land known as a “flat iron.” It also was originally going to be called The Fuller Building, after the head of the assigned construction company, but the company’s owner died two years before its completion. While the publicly redubbed building has become quite a photogenic landmark, people then didn’t know what to make of its novelty architecture and steel frame—supposedly its design causing a stirring up crazy wind gusts. 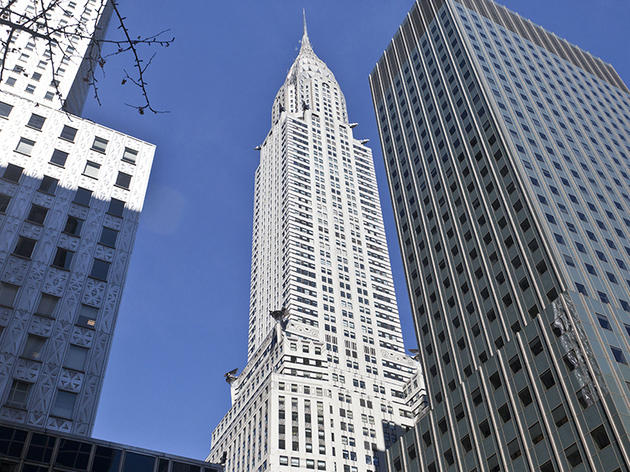 Prominently overshadowing the east side of midtown, this art deco structure has an automotive angle: It was the headquarters of the Chrysler Corporation from 1930 to the mid-1950s. It was built during a head-to-head height race between two other simultaneous projects, the Empire State Building and 40 Wall Street. What helped the Chrysler Building surpass them was its 185-foot spire, which took only 90 minutes to be installed. The spire also helped the Chrysler Building secure its place as the tallest building in the world, but it lost that title less than a year later upon the completion of the Empire State Building. Neat fact: Walter P. Chrysler, the company’s founder, footed the construction bill himself so he could leave the building to his two sons. 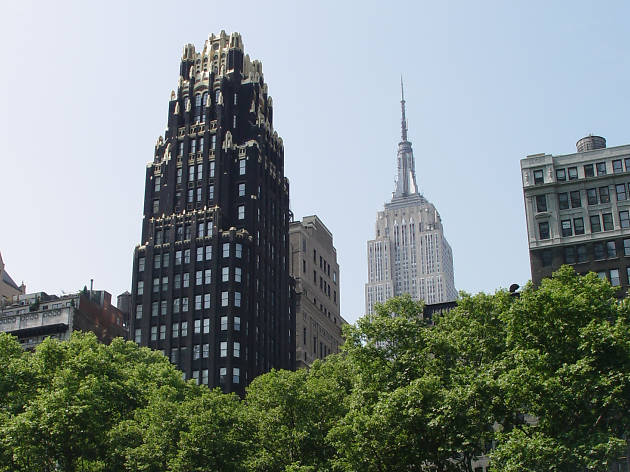 With its striking black-and-gold facade, this building (also later known as the American Standard Building) now holds the Bryant Park Hotel, but it was originally built in 1924 for the American Radiator Company. Designed by architects Raymond Hood and John Howells, this midtown building’s black brick foundation with golden accents is said to symbolize coal as a nod to its signature product: the radiator. Having a combination of Gothic and art deco styles, the building holds the distinction of being the first NYC skyscraper to feature dramatic exterior lighting. Another symbolism: the building is a subject of the 1927 Georgia O’Keeffe painting, “Radiator Building – Night, New York.” Once holding offices, the present day Bryant Park Hotel opened here in September 2001. 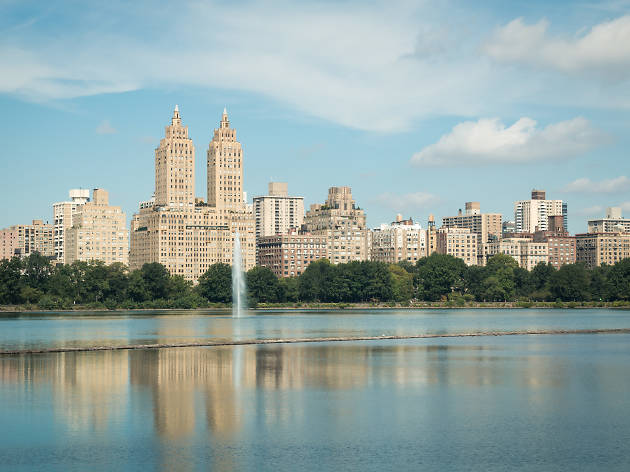 This set of art deco twin towers at Central Park West has some noteworthy tenants, but its name was passed down from its location’s previous occupant—the El Dorado. The original luxe property was an eight-story residential building that took up a full block and had been built in 1902. Its present successor eventually followed when the lot on which the El Dorado stood was sold in 1929 for redevelopment. The Crash of ’29 didn’t immediately impact its construction, but it went into foreclosure two years later. However, the Eldorado did open under new management by Central Park Plaza Corporation, with early tenants including Barneys founder Barney Pressman. Other name-droppable residents include author Sinclair Lewis, who owned a duplex penthouse. 300 Central Park West 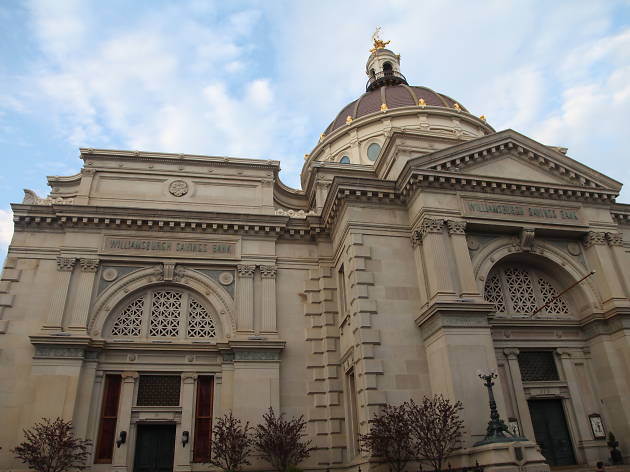 Now known as One Hanson Place, this modern Byzantine Romanesque skyscraper in Fort Greene was completed in 1929 as the then-new headquarters for Williamsburgh Savings Bank. This 37-story building with its four-sided clock tower also stood as the tallest building in Brooklyn until 2010, and for many years, dental practitioners had offices here. About a decade ago, the landmark went through a major restoration and redevelopment, and it got a dual purpose: Magic Johnson had its upper level converted into luxury condominiums, while its bank level was brought back its original splendor and is rented out for film shoots and high profile events. 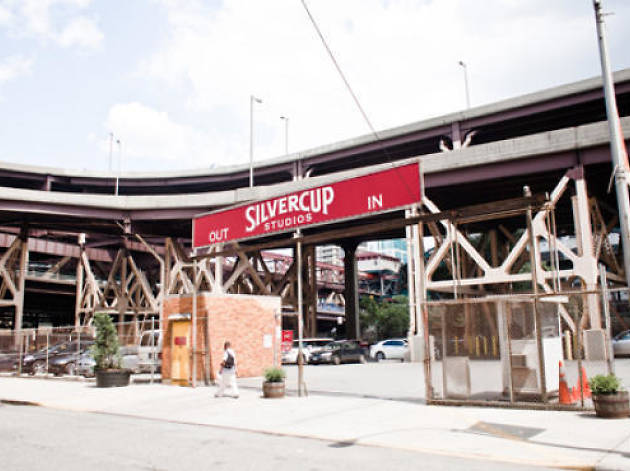 This film and TV production facility opened its first studio in 1983 in Long Island City, in what had been the flour silo room of the now-defunct Silvercup Bakery, the trade name for a bread made by the Gordon Baking Company. The company was in the dough from the 1920s up through the 1970s, when a teamster strike resulted in shutting down the operation. However, Silvercup Studios has kept its predecessor tenant’s leftover neon sign (with a slight tweak in the lettering). 42-22 22nd St, Queens 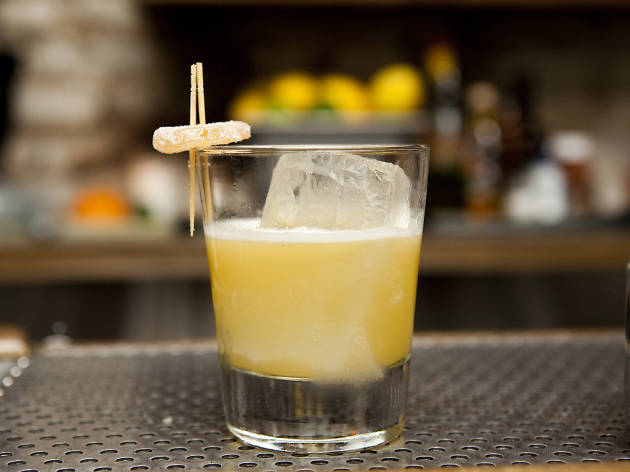