Mikala, how does your gallery 4A Centre for Contemporary Asian Art blend in with the Haymarket precinct?
Major art institutions are temple-like structures and they’re a bit quarantined from daily life. Our location means that we’re in the thick of things: Chinatown, Koreatown, Thaitown. For many people who work in the area who’d never go to an art institution, we’re part of their daily lives, which is nice. There’s a lady that runs a Hong Kong hole-in-the-wall that makes really good coffee and egg-and-Spam sandwiches – she never physically comes in, but she’ll always tell me what’s in the show because she walks by the window every morning and checks it out.

Where are your favourite places to eat in Haymarket?
I grew up in Hong Kong and when I get a hankering for Hong-Kong-style food, there’s a great diner on the top floor of Dixon House, called Ching Yip Coffee Lounge. There’s T Noodle [now known as Noodle Bay], which is a Chongqing noodle house in Prince Centre. We come to Boon a lot. It’s [got] probably the best coffee in Chinatown, amazing desserts, and it’s part of a family business, the people who own Chat Thai – people who’ve made their lives from Chinatown, so I like supporting them.

Your hidden gems?
Dragon Espresso, where we get our Hong Kong scrambled egg sandwiches from. The lady who runs it used to work at Bennelong. I guess there are some ‘secret’ obvious places, like the Chinese Garden of Friendship, which people almost forget about, but it’s like a safe haven – especially when it’s really hot.

Where do you get your local art fix?
There’s some great public art all around Chinatown: amazing Lindy Lee works, outside Paddy’s Markets – they look like highly polished philosopher’s stones. There’s the Jason Wing [work] down the laneway, with all the angels. You know the artist [Ryoji Ikeda] – he does the big analogue-to-digital soundscapes? He’s done a massive one at the Convention Centre at Darling Harbour. It ticks and makes noises. But people don’t know it’s there.

Where do you go after dark?
Along with the whole 4A team, I'm a big fan of late-night karaoke and electronic darts. Our favourite place is Dynasty Karaoke – we love the place so much we’ve made it the venue for our Club 4A night, happening as part of the City of Sydney’s Chinese New Year Festival. We’re bringing a bunch of amazing performance artists to the club, including Rainbow Chan, Amrita Hepi and multimedia artist DEADKEBAB, all the way from Japan. Dynasty’s amazing decor, lighting and karaoke selection make for a super fun night.

Do you have any favourite shops in the area?
Working in Haymarket, I’m so inspired by all the street fashion I see every day. I think this is one of the most stylish areas of Sydney. From little tiny boutiques in malls to designer stores with the latest Balenciaga socks – it’s all here. Personally, I love the little shops in the Citymark Building.

Tell us about your site.
Our building is special, because it was built in 1893-1895. It was the office and public toilet for the market. At the back was where they kept all the canvases for the market gardeners – it was then Belmore Market. Then it moved, became Paddy’s Market, but it was originally here. I always think of it as the building that fed Sydney.

You run Congee tours, where people discuss 4A’s exhibitions over congee at Mother Chu’s Taiwanese Gourmet or Boon Café. Are there other ways locals interact with the gallery?
We had a show last year called ‘Before The Rain’, and we had a Cantonese translation [of the name]. Everyone was knocking on our window being like, ‘nup, not the right term’. So we ended up changing it like three times. I like that people will come along with their shopping trolleys full of spring onions and be like, ‘uh no, wrong’. So we have this linguistic debate with the community about names of our shows, which is nice. 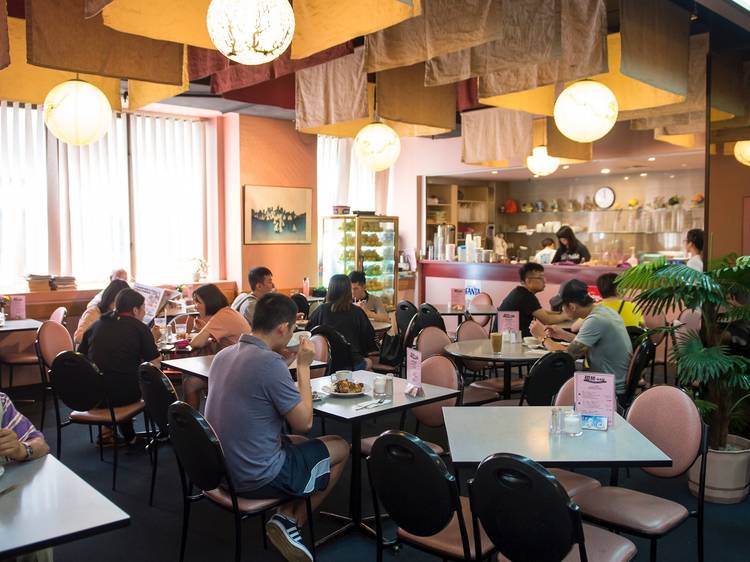 Ching Yip Coffee Lounge is one of Chinatown’s best-kept secrets, and getting there is half the fun. Hop on the creaking escalator from Dixon Street and ride your way past travel agents, herbal stores and accountants until you find the blinking neon sign at the end of corridor. This Hong Kong diner is all about comfort food for cheap which would explain the dining room full uni students and pensioners, all talking a mile-a-minute in Cantonese. 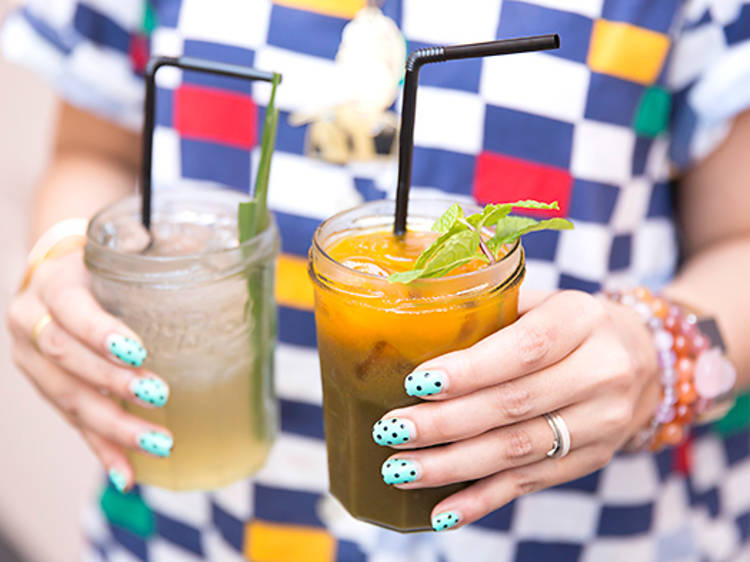 The white-tiled walls and big windows looking out on Pitt Street give this place the sort of designer dried goods vibe that compels you to empty your wallet on imported lime paste, kitchen gadgets and dried mango sheets. But the left side of the room looks like a traditional Australian café: you've got your glass display case lined with chocolate tarts, sweet buns, and scrolls. In addition to your flat white or tea (leaves courtesy of Tea Craft), they do Thai coffees, Thai red teas and cold-press juices supercharged with tumeric shots for an antioxidant boost. 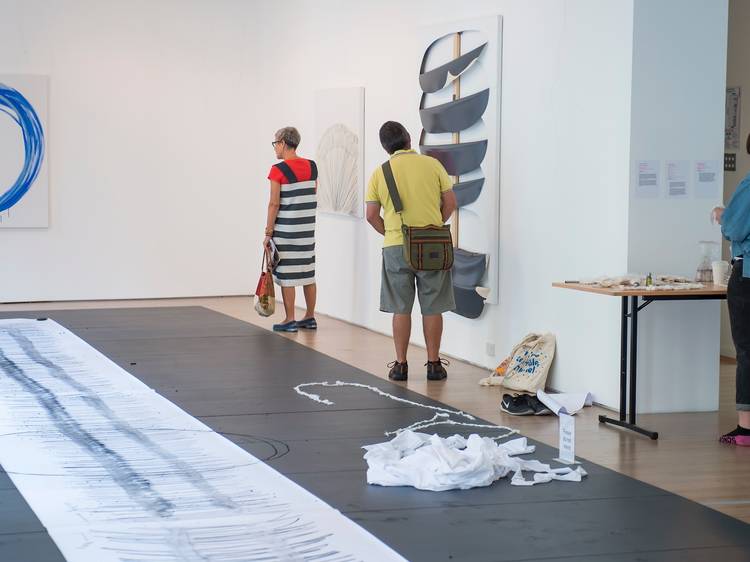 4A Centre for Contemporary Asian Art

This non profit arts organisation and gallery holds a regular program of exhibitions, performances, and public programs with local and international Asian and Australian artists, with the aim of presenting different cultures through the arts. 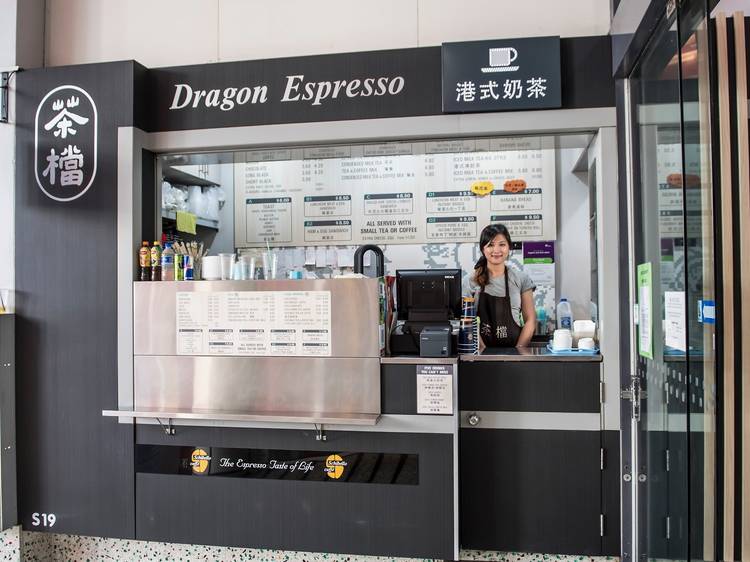 The menu is a mix of simple dishes with a Hong Kong influence. Spam is featured heavily, replacing bacon in the breakfast sandwiches. Also on offer are instant noodles with eggs and Spam and Hong Kong milk tea, served either hot or cold. 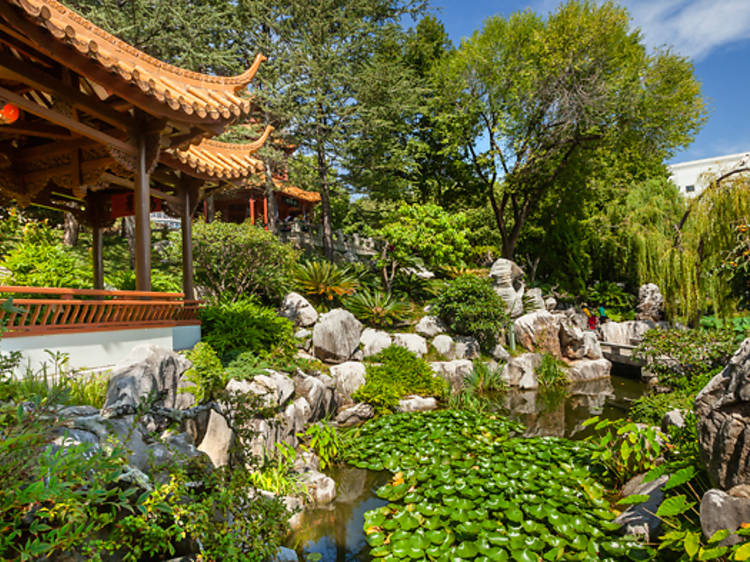 Waterfalls, weeping willows, lily pads and blossoms make this one-hectare garden a charming and calming place to visit. Officially opened in 1988, the Chinese Garden of Friendship was initially commissioned by the Guangdong Landscape Bureau in Sydney's sister city Guangzhou to reflect the bond between the two cities, and incorporates architectural principles of the Taoist philosophy of yin (calmness) and yang (activity). 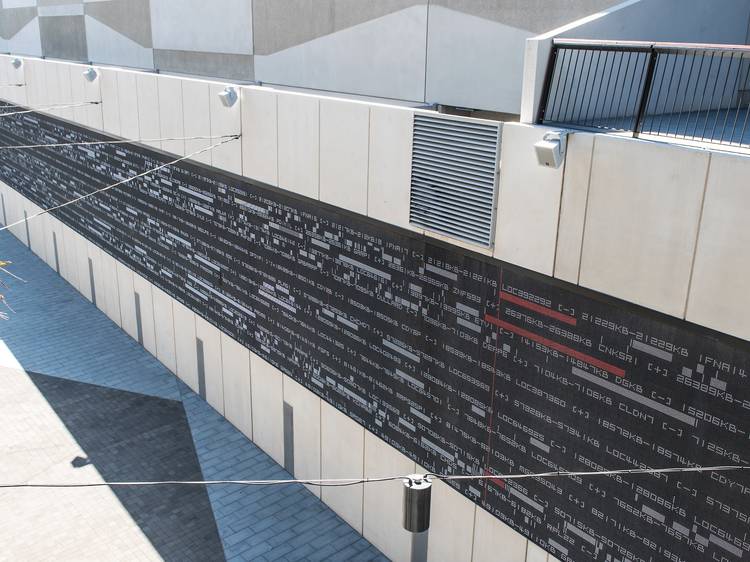 The Japanese born, Paris based artist is known for his massive projections that combine both pure audio and visual media, creating mathematically precise live performances and installations. 'The Radar' is a looping series of images that separate the exhibition space into a grid, with radar lines that sweep across periodically, leaving highlighted marks in its wake against the dark background, like a ship slowly moving across a deep ocean. 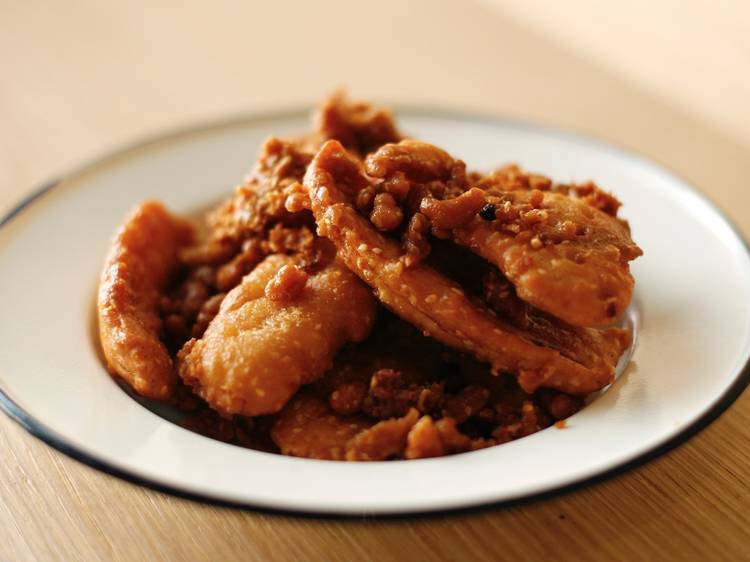 They have restaurants all around town (Manly, Randwick and Galeries Victoria in the City) but this one may just prove to be the best of the lot. As soon as you walk through the door into the New York warehousestyle space you’ll see a bunch of chefs toiling over flaming grills and boiling oil in a space big enough to swing a kitten. We start with the feather-light redfish fritters – powder puffs of kaffir lime spiked redfish mousse served with pickled cucumber. The chicken and prawn wantons – a lot like the Cantonese version you see at yum cha – are accompanied with a sauce that’s a little too sweet. 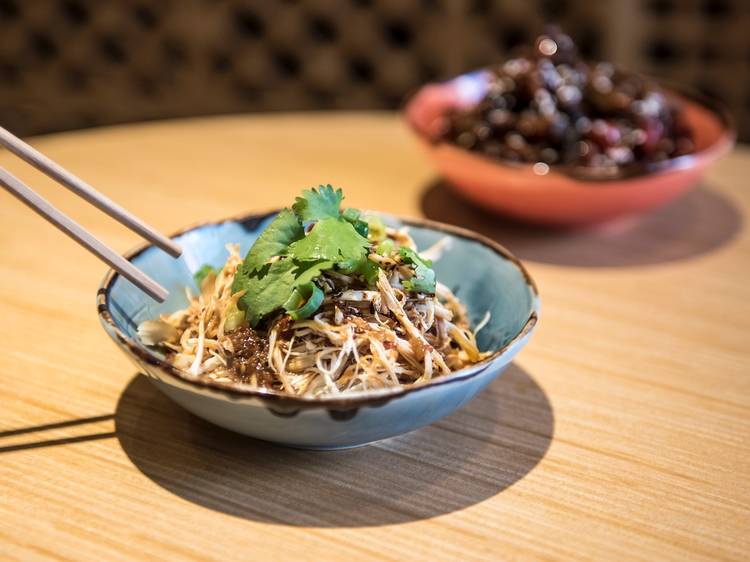 Arrive at this noodle joint and you’ll be greeted with an invitingly colourful menu, covered with pictures of a selection of dishes and housemade dumplings. Noodle Bay serves up the standard fare of Asian cuisine including wontons that are available in either soy sauce or clear seaweed soup. Usual favourites like fresh cucumber with mashed garlic, chongqing noodles and mapo tofu are also available. Cool off with a range of iced teas. 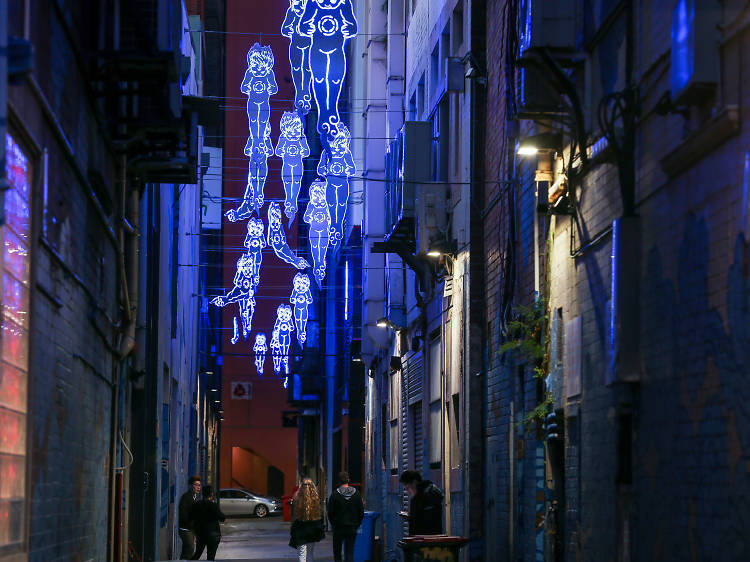 In Between Two Worlds

The practice of Sydney artist Jason Wing is influenced by his Chinese and Indigenous heritage. This artwork, commissioned by City of Sydney council as part of a revitalisation of three laneways in Chinatown, is no different: it incorporates Chinese and Aboriginal motifs, including “auspicious clouds” and spirit figures that represent ancestors. Wing designed the work to be a passage, between heaven and earth – so walk through the lane to get the full effect. 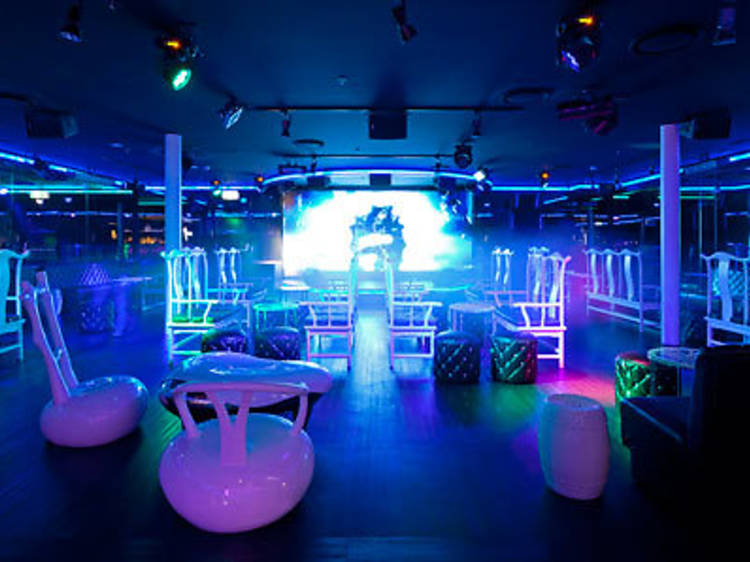 An unobtrusive doorway in the middle  of Dixon Mall in Chinatown leads to an elevator, and then you walk into a Blade Runner-style idea of the Shanghai wine bar of the sci-fi future: glass, screens, mirrors, jade statues. You’ve got a choice of either private rooms or taking your chances on  the big main stage, and staffers here seem to think that if they keep you fed and watered, you’ll stay all night. They’re right. 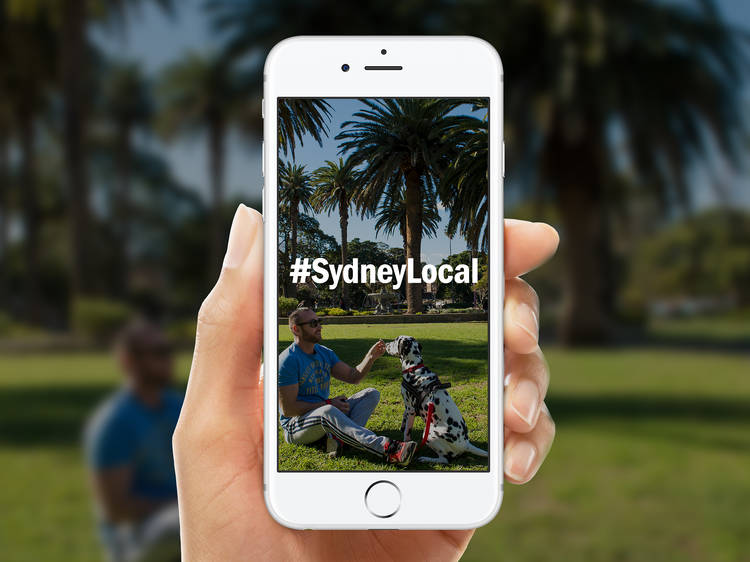