With Sydney’s art galleries one of the first creative outposts able to re-open their doors, the temptation to dive on in is strong. But if you want to dodge the crowds pouring back in, why not stick to the great outdoors instead?

The city is teeming with incredible street art you can admire for free. Home to a super-cool community of artists ready to bring a splash of colour and a touch of provocation to any available wall, these works make for the  perfect Instagram selfie snap.

And just like every block of real estate in Sydney, these urban canvases are hotly contested spaces. Getting there before they disappear is part of the thrill.

Here’s our pick of the must-dos you need to see to believe. Also check out Sydney's best public art. 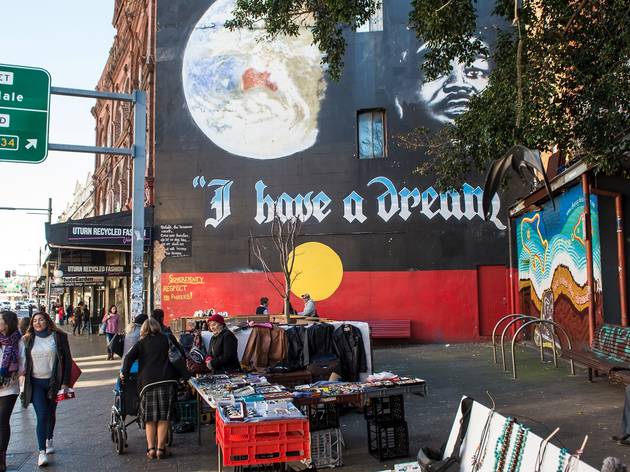 Back in August 1991, artists Juilee Pryor and Andrew Aiken took to King Street in the dark of night with spraycans, ladders and a cherrypicker, creating Newtown’s most loved mural: a tribute to Martin Luther King and his eternal words. The pair had been denied approval to create the artwork twice, as the council wanted to reserve the site for advertising billboards. But police who were called to the site turned a blind eye and allowed the painting to continue. Since then, it’s been restored, was the subject of a documentary (which you can watch on YouTube), and was the star of a Coldplay music video (sorry, Chris Martin). Despite starting its life as an illegal work, it’s now heritage listed. 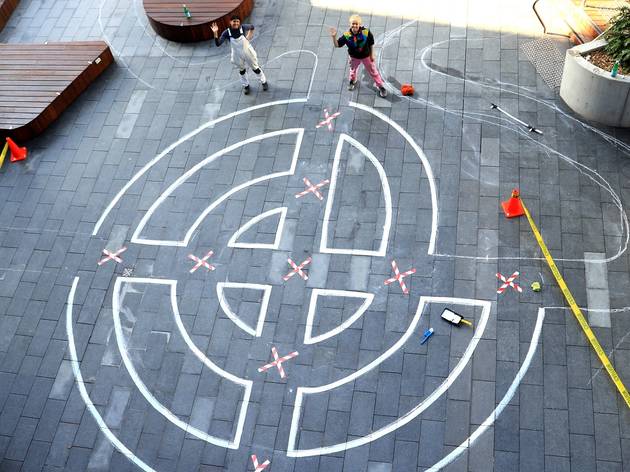 Explore Western Sydney’s bustling streetscapes as brought to life by talented emerging artists Leanne Tobin, Jason Wing, Nadia Odlum, Penelope Cain, Kalanjay Dhir. Tasked with representing the rich diversity of the suburb using its thoroughfares as the canvas, they've created winding labyrinths, murals depicting Indigenous fishing techniques, and pavement-drawn swimmers. A great excuse to get out and about in the sun while soaking up some culture. 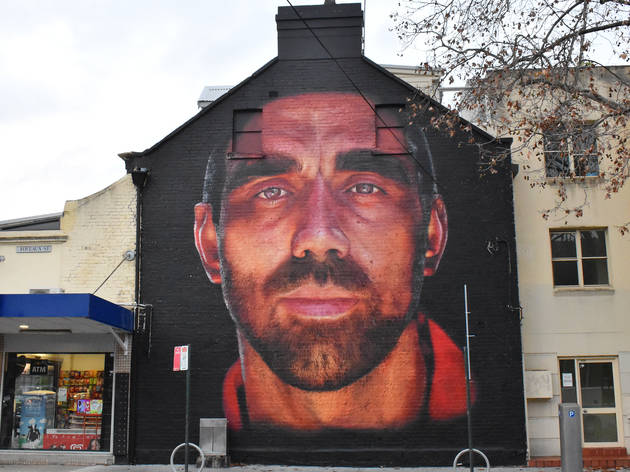 The city's collection of street art got a stellar new addition when a two-storey portrait of AFL legend Adam Goodes, ofAdnyamathanha and Narungga heritage, appeared on the corner of Crown Street and Foveaux Street in Surry Hills. Created by Apparition Media, it took four artists using a cherry-picker just eight hours to create the incredibly detailed rendering of the former Sydney Swans player. While the portrait was created without any explicit connection – the mural was originally planned in February, but postponed – its appearance less than a week after the huge Black Lives Matter demonstrations that took place in cities and towns across Australia has added a powerful extra dimension to its creation. 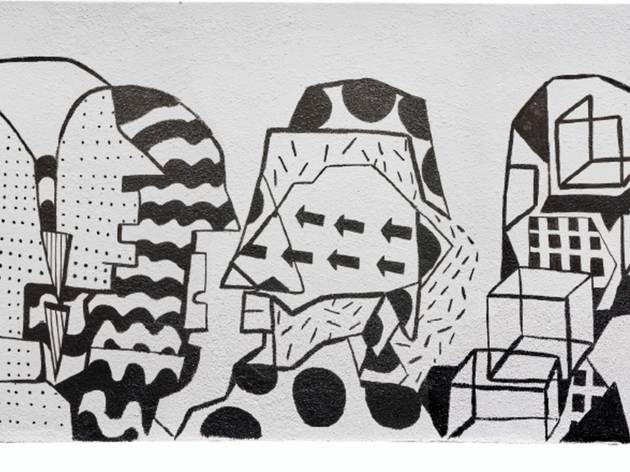 A self-described outsider, Joel Veness’ new mural Renegades of Funk explores the idea of isolation as an artist and as human beings more broadly. Located behind the Sarah Cottier Gallery in Paddington, on the corner of Cecil lane and Sutherland Avenu, the 70-foot mural takes its title from the track by American rock band Rage Against the Machine. The figures depicted draw on Easter Island’s intriguing giant sculptures. Their remoteness is a metaphor for this work. All looking the same way except one, it’s this face, the ‘renegade’ that bucks against the crowd. 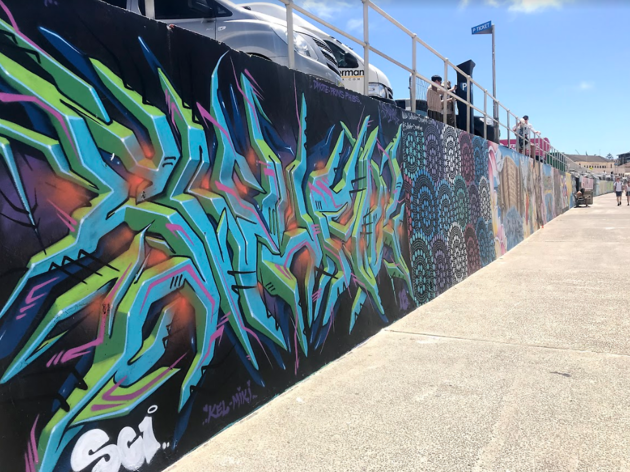 The long concrete wall that runs along the back of the south end of Sydney’s most famous beach has been a canvas for street artists since the 1970s. But things have changed a lot since then: it’s now regulated with the council approving a rotating roster of leading artists (mostly local but a handful of famous international stars) who get to take over their allocated segment of four or eight metres for a limited period. teh spot courted controversy recnetly when ELK's Border Force mural, depicting heavily armed police, was defaced. 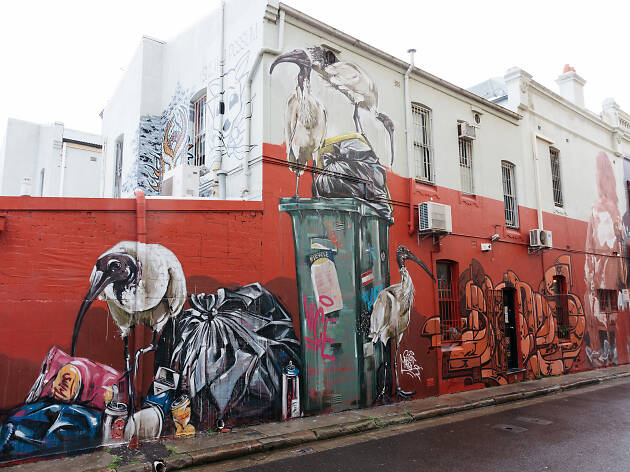 Scott Marsh has been one of Sydney’s most controversial street artists in recent years, thanks to his fiercely political works, including one showing former NSW premier Mike Baird in the hands of the gambling industry, one of former prime minister Malcolm Turnbull doing a shady deal with mining giant Adani, and another featuring former prime minister Tony Abbott and cardinal George Pell in a particularly provocative pose. But it was his painting of George Michael as a saint that became the subject of great scandal when it was vandalised during the marriage equality plebiscite in 2017.

The Chippendale mural we’ve picked – appropriately located in Teggs Lane, an alley full of rubbish bins – isn’t one of his more politically charged works, but it is an unlikely tribute to a true Sydney icon: the bin chicken aka ibis. 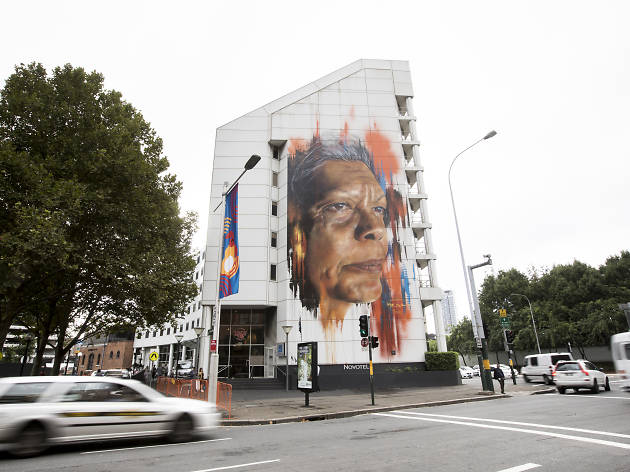 Melbourne artist Matt Adnate painted this portrait of Aboriginal rights activist and Wiradjuri elder Jenny Munro in June 2016 onto the eastern side of Novotel Darling Square as part of a commission by ANZ. Munro founded the Aboriginal Tent Embassy in Redfern in 2014, in protest against the commercial redevelopment of the Block, and was part of the group that eventually secured a deal for affordable housing for Indigenous families. The six-storey high portrait took five days to complete. If you look closely, you can see a mountain landscape painted in Munro’s eyes. 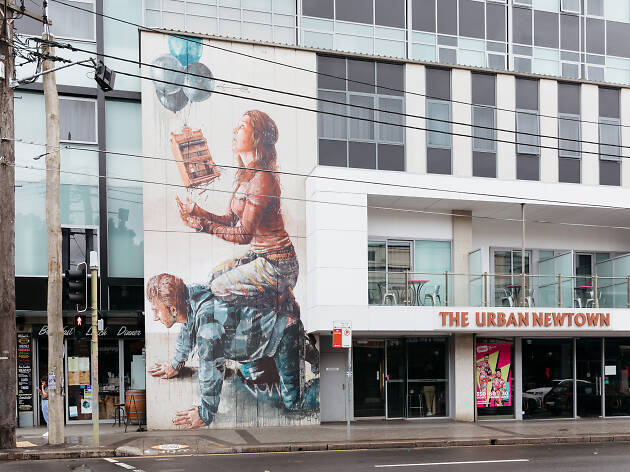 What does Sydney’s much discussed and debated housing bubble actually look like? It’s probably a bit uglier than this whimsical painting by Sydney artist Fintan Magee, which can be dound on the side of the Urban Hotel on Enmore Road, Newtown. Fake news or not, we’re still big fans of this work. 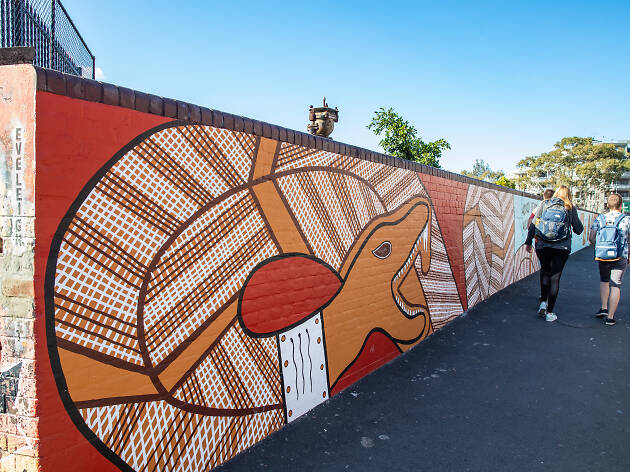 This mural, showing scenes of Aboriginal life from the last 40,000 years, has greeted visitors to Redfern as they arrive at the station and exit onto Lawson Street since 1983. It was originally painted by a group of artists led by Carol Ruff – including Colin Nugent, Tracey Moffatt, Joe Geia, Avril Quill, Kristina Nehm and Charlie Aarons – and  was restored to its original glory by the Redfern Station Community Group in 2018. Stretching from ancient times, up to colonisation and beyond, there are portraits of community members such as Aunty Mona Donnelly, and one panel showing the 1979 Redfern All Blacks rugby league team. 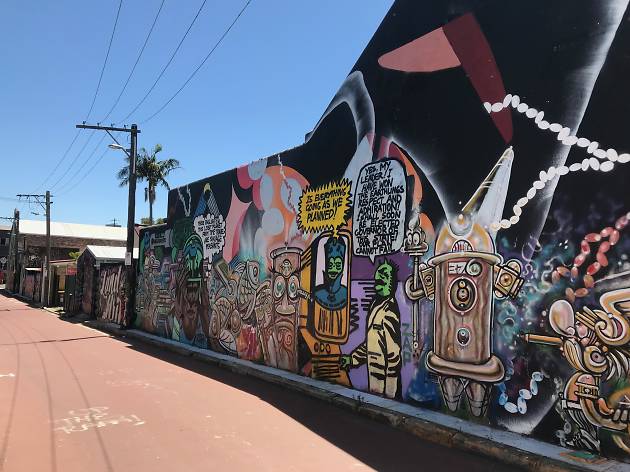 This art project has been running since it was launched by Tugi Balog in 2000, bringing a range of graffiti artists to a formerly nondescript back alley near St Peters station. Yes, it’s a great Instagram backdrop, but it also has some serious artistic kudos – works developed by artists in May Lane have toured extensively to galleries around the country. 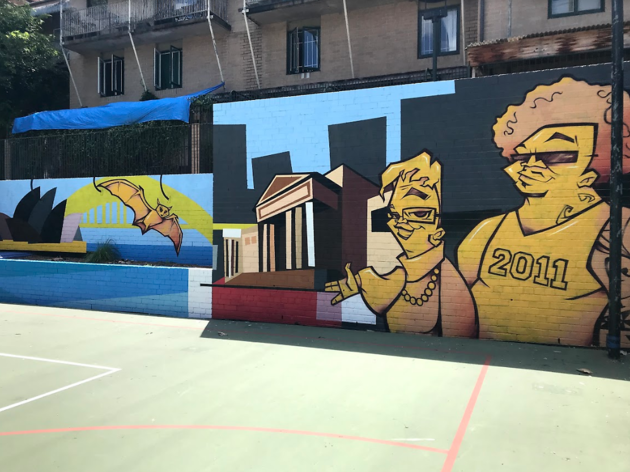 How do you represent a community as diverse as Woolloomoolo – home to some of the city’s highest earners living alongside public housing tenants – in one mural? This work by community organisation Youth and Family Connect is painted on a retaining wall at the back of Woolloomooloo public tennis court and captures the rich diversity of the suburb and some of its most recognisable sights, including the Art Gallery of NSW and St Mary’s Cathedral.

Check out the best public art in Sydney

Public art – in any city – is a notoriously fraught business. No matter how hard you try to make everyone happy, every work will have its detractors.