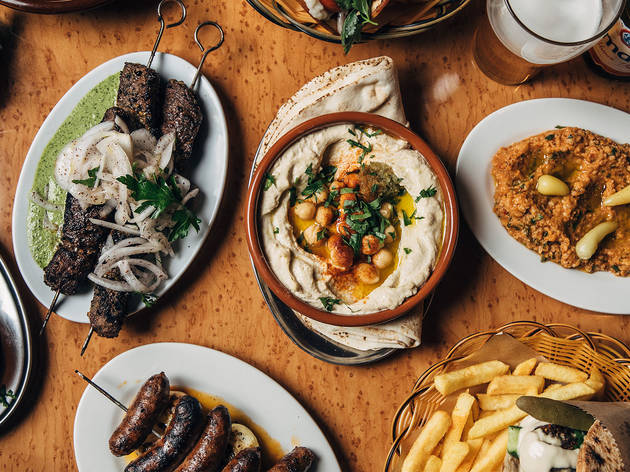 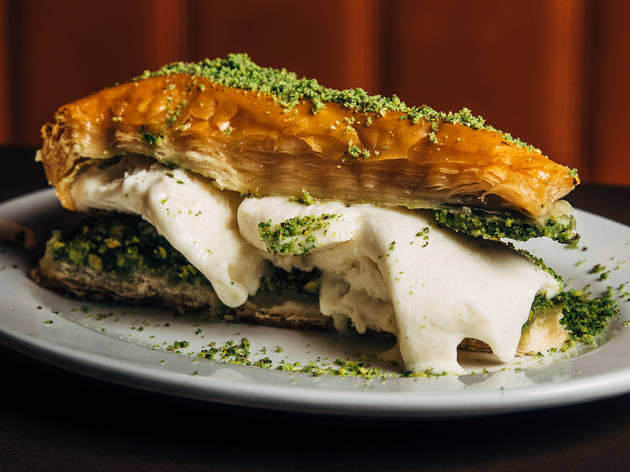 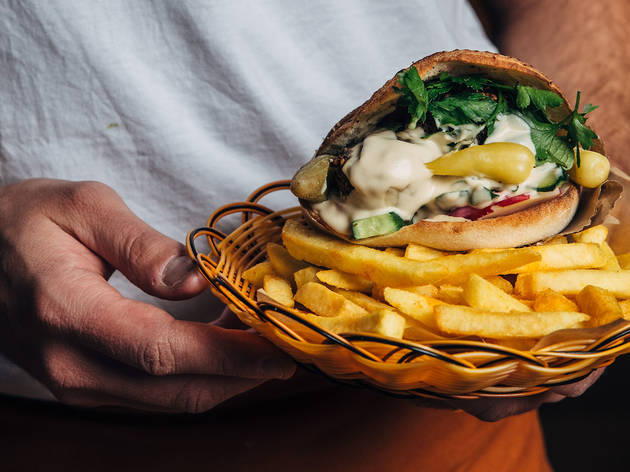 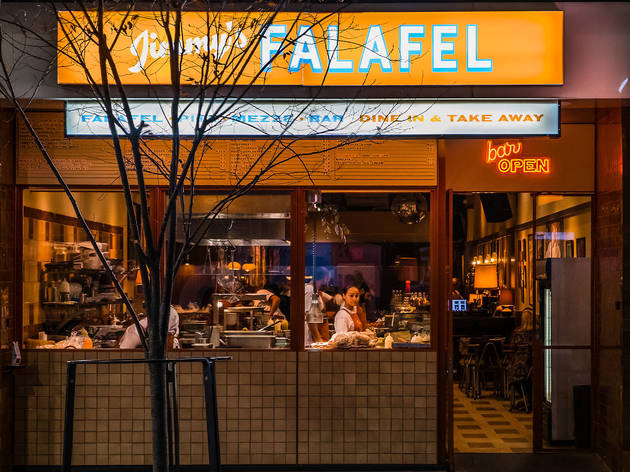 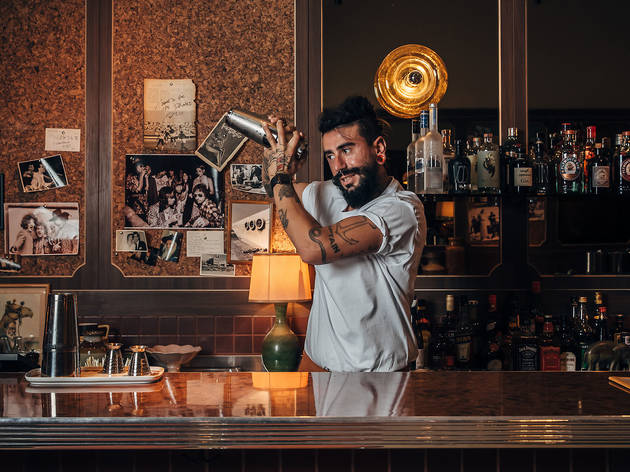 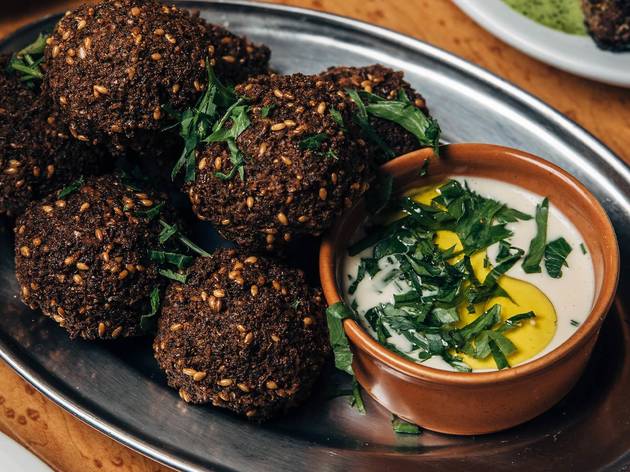 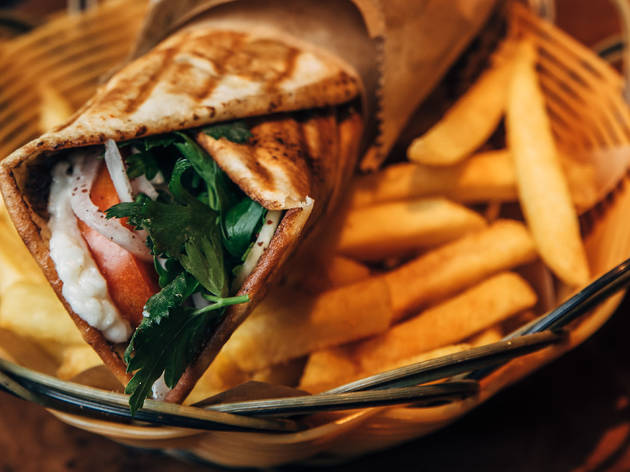 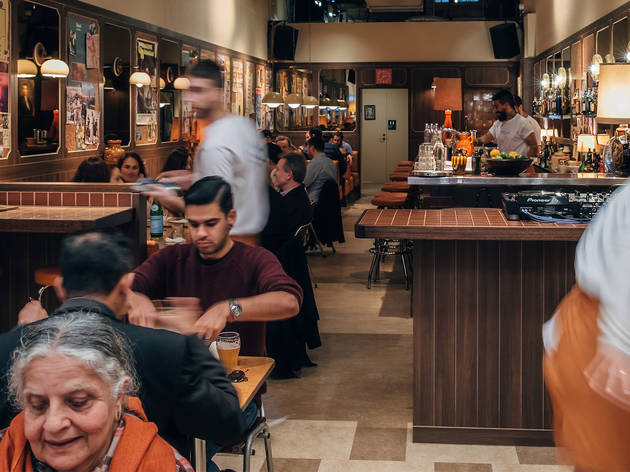 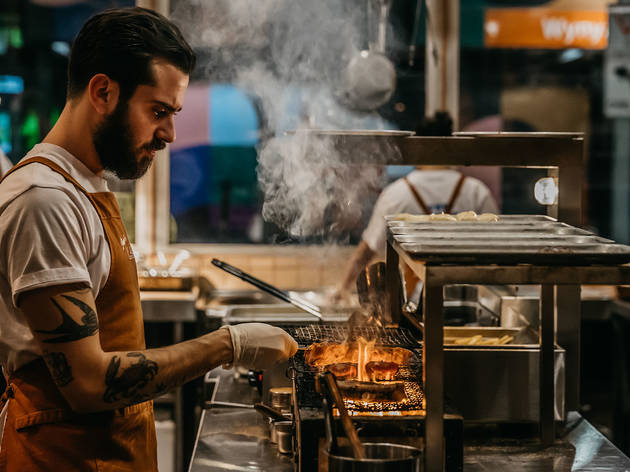 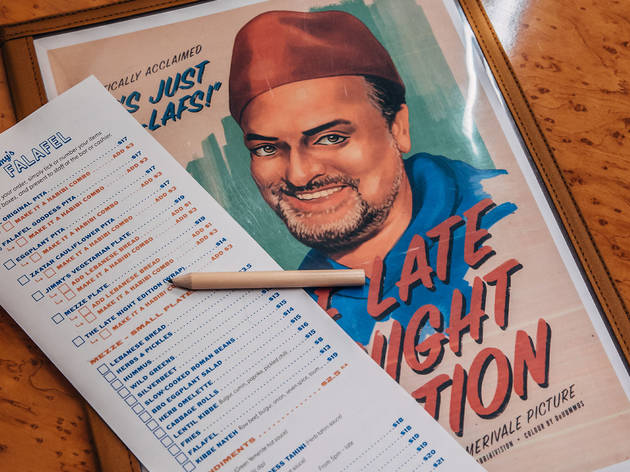 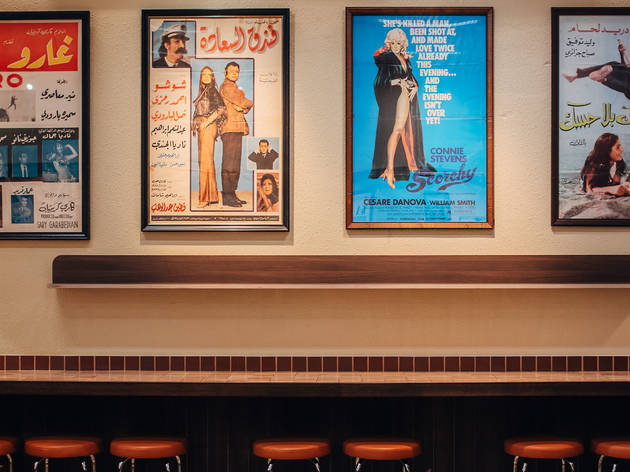 Jimmy’s Falafel is ready for Sydney to become a 24-hour city again. Right now the queues are forming at noon, not midnight, but that primo location on George Street means that as soon as the dance-floors reopen they’ll be able to serve their fresh pita pocket stuffed with fried-to-order falafel at all hours of the day and night.

As things currently stand, the lunch crowds are more than happy to hang outside and watch the chefs in the open kitchen hand-shape each little chickpea patty and drop it into the boiling oil. It has the same calming quality as watching a doughnut machine at work, like ASMR but for your stomach. The key to the falafel here is contrast – a soft interior lightened with fresh coriander, parsley and mint, with a properly crunchy shell.  It took head chef Simon Zalloua three full months to nail the recipe – and another three months was needed to perfect the pita bread.

As popular as those sesame crusted falafel are, you need to try the ‘late night edition’. It’s an homage to a hole-in-the-wall shop Falloua found in Beirut, where two men were applying kafta on to Lebanese bread fresh out of the toaster – kind of like a cheat’s lahm bi ajeen. You might know it as lahmacun, the meat-topped pide served like a pizza across the Middle East. At Jimmy’s, they’re using the crisp flat bread spread with a mix of lamb mince, capsicum, and chilli as a way to corral a whole lot of extra feisty flavours into a single punchy snack. Sumac-laced raw onion adds tang and bite, as does fresh lemon juice. There’s garlic toum and Aleppo pepper for insistent but not overwhelming heat, and fresh tomato and parsley tie it all together. It’s funky, fragrant and not something you could eat before a meeting in good conscience, though you might be tempted to risk it anyway.

Merivale are famous for producing aspirational restaurants, from the high society waterfront dining room of Bert’s on Pittwater to Fred’s French farmhouse vibes. Jimmy’s Falafel is not one of those places. Instead, it’s a bit of a party (literally –  three nights a week they have DJs in the restaurant). Up front is for speedy takeaway, but grab a table in the dining room, a burning sunset of 1970s orange and dark timber with Arabic film posters on the walls.

Stay in theme and order the two Lebanese wines on the list, both from the Bekaa Valley. One is at the cheaper end and one is poured via Coravin for more expensive tastes – both come in very social 250ml pours for a tipple that won’t become a topple later on. Staying straight-edge during daylight hours? Try the Laziz, which is kind of like a cross between non-alcoholic beer and a fizzy drink. It’s a malted beverage, so has that savoury grain profile you’d expect from beer, but it’s spiked with pomegranate juice for sharp sweetness.

Once the sun goes down they fire up the charcoal grill for meatier eats, but you can, and should, make a meal out of the mezze, be it the barbecued eggplant dusted with Aleppo pepper; wild greens cooked down into a slick tangle with olive oil and garlic; mild bulgar wheat kibbeh or a rich, suedey beef version. Whatever you do, get the slow-cooked Roman beans dressed to impress in a mahogany-hued tomato sauce heady with sweet spices like cinnamon, nutmeg, clove, cardamom and cumin. How they cram so much flavour into something so simple is a mystery worth mulling over on consecutive visits to Jimmy’s Falafel.