It cannot have escaped your attention that Sydney is a town blessed with extraordinary views. Whether it's surf rolling into sand, sweeping stretches of harbour, world-famous architectural landmarks, or simply leafy streets populated by pretty young things, Emerald City's got good looks to burn. Here are six of the best restaurants and bars for kicking back and taking it all in. 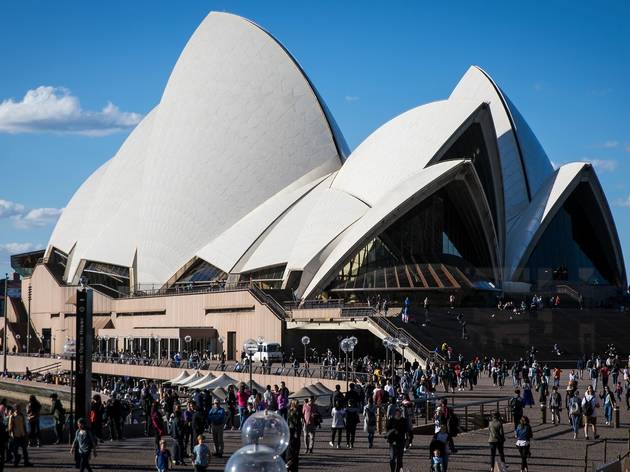 Dining at Aria will make you fall back in love with Sydney. It’s a kind of romantic alchemy forged by the floor-to-ceiling glass – the only thing between you and the gentle glow of the Sydney Opera House – and six flawless courses from the chef Joel Bickford. How can you not feel flattered by a lavish opener of yellow tail slices regally ornamented with sterling caviar and crisp pork jowl pieces? A dish of golden blue-eye trevalla fillets is served with a riff on a pepperonata that balances the sweetness of capsicum with a salty caper cracker, herbaceous basil oil, smoked almonds and little razorback prawns. Pork belly gets a surf-and-turf makeover with green lip abalone and an intense black vinegar broth. When you’re dining here, you’re getting the best of everything Sydney has to offer. How could you not fall hard? 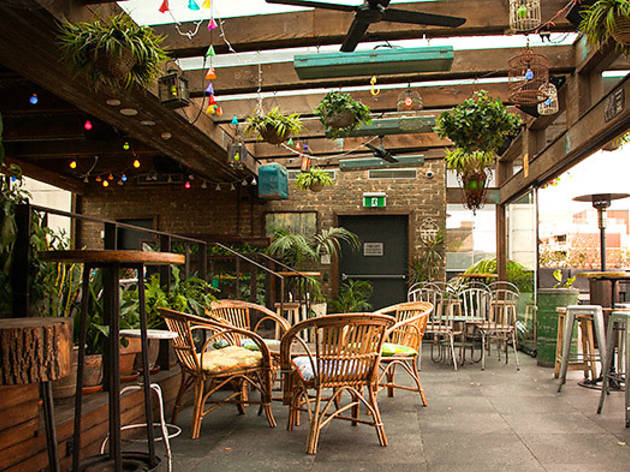 The Kings Cross Hotel is a pub at heart, but it’s one that spans a six-storey building, from the rooftop down to a subterranean dive bar, in the very heart of Sydney’s traditional entertainment district. We’ll always try and score a table out on the first floor balcony, lit by the red neon glow of the big Coca-Cola sign, for the best people-watching in town, or on the open-air rooftop bar on the fifth level, which has breathtaking views of Kings Cross. Level two is an intimate theatre with a year-round program of professional productions. There’s also an atmospheric Bordello Room and a pumping club level. This summer, Kings Cross Hotel is teaming up with Bacardi to present a Summer of Music – a series of parties and pop-ups. There’ll be diverse club nights, bands, dance classes and workshops over four hot months, accompanied by a Bacardi cocktail menu (think Pineapple Mojitos and frozen Piña Coladas), and the rooftop will be turned into a rustic and leafy Caribbean oasis. 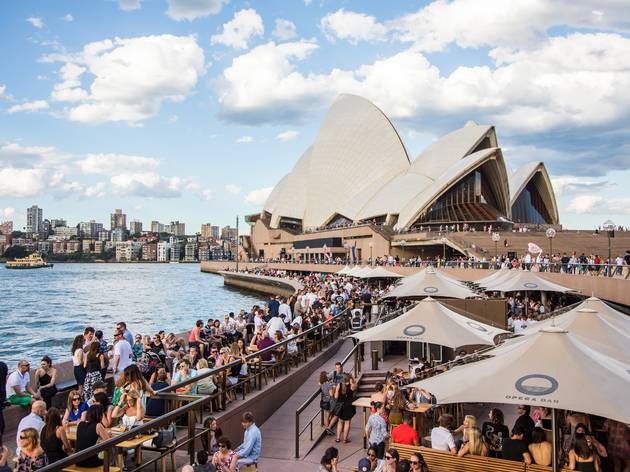 Opera Bar is both one of the most enviably located bars in the city as well as its most advantageous spot for a pre-show drink. Snag a seat facing the Harbour Bridge up on the raised promenade; the tables up there are prized for scenic drinking. If you want to complete the perfect Sydney Instagram pic with a cocktail they have about a dozen concoctions that favour sweet, fruity, brightly coloured ingredients designed to pop with the right filter. We recommend ordering a classic instead – a Rosé Spritz is never a bad idea – but there is no fault to be found with a round of tall, crisp glasses of Opera Bar Pale Ale, either. You can order high end pub staples that hover around the $30 mark if you’re stinging for a hot meal, but grazing is the optimal snack pace here. There’s a set cheese and meat board on the menu, and it’s worth wandering over to the dedicated small goods counter if you want to pick’n’mix. Given you’re already sipping sparkling by the harbour you may as well go full toff and order half a dozen oysters or four fat, rosy king prawns. 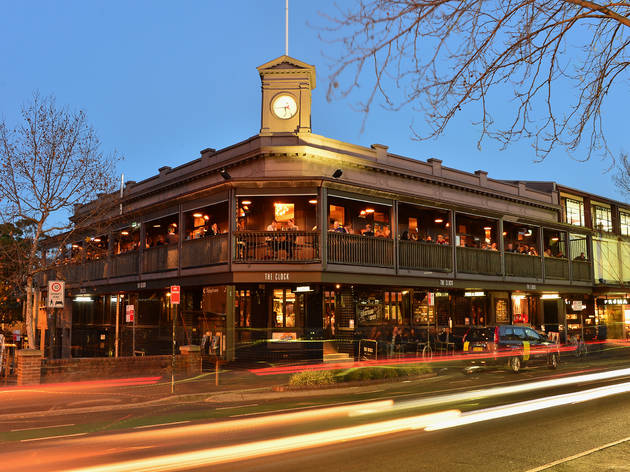 The Clock is an institution. The regal two-storey hotel occupies a commanding position on Surry Hills’ Crown Street where it aims to be most of the things to most of the people and does so commendably – everyone is welcome here. The biggest shift in the past few years has been the addition of the courtyard, and you’ll find an extensive collection of clocks in the downstairs front bar, as well as big crowds hoeing into pizzas and other pub staples like fish and chips and steak. It’s mostly a beer scene down here, but if you’re looking for cocktails or wine from the mostly Australian list, upstairs is for you, where the old wraparound balcony remains the perch of choice for a vista of the pleasant hills of Surry. Trends come and go but it seems there will always be a crowd at the Clock. 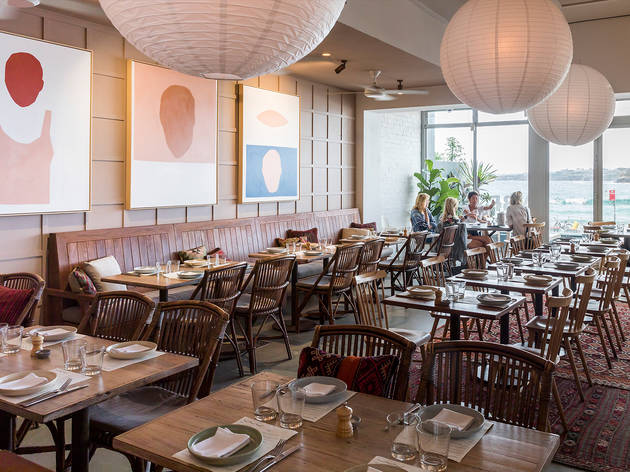 This seafood favourite has been a staple of Bondi’s beachfront dining scene since opening in 2012. Now, you’ll find Jesse McTavish behind the pans and a refreshed menu. Dishes of course are focused around seafood, including Hiramasa kingfish ceviche with coconut water and avocado (served in a coconut shell for extra-strong vacation vibes); pickled mussels with baby octopus, chorizo and red pepper mayonnaise; and prawn sangas with sea rocket mayo. McTavish is a keen forager, and has been experimenting with ingredients he has found in the Bondi Beach area, including sea rocket, which grows prolifically along the coastline. The restaurant exemplifies beachside chic and is the perfect spot for lunch and dinner with a view of those famous waves. 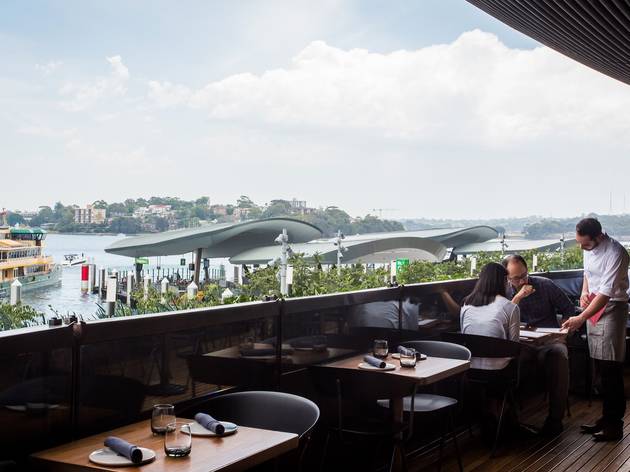 Inside Matt Moran’s Barangaroo House, Cory Campbell (ex-Noma and Vue De Monde) has created a menu utilising native Australian ingredients. A perfect, juicy segmented spatchcock frocked in properly charred skin gets hit with the high cuisine equivalent of a sour warhead in a preserved lemon sauce packing the payload of a citrus orchard. Wild caught kangaroo cooked over a woodfired grill is rested so that it’s soft, supple and juicy. Before you skip the sirloin in favour of something more creative, you should know that it comes with a taragon emulsion and butter on the side hiding a secret ingredient: crickets. There’s professionalism to Barangaroo House that ensures smooth sailing from door to table and perhaps upstairs afterwards for one more drink overlooking the harbour.