The awe-worthy landscapes of New South Wales are a playground for hardcore hikers, where they can test their mettle against some of the most challenging and untamed wilderness in the country. But what if you’re a less seasoned explorer who's not quite ready to go full bush? Fortunately, there are still plenty of opportunities near Sydney for novice hikers to experience the great outdoors without trekking too far from civilisation.

In the national parks that sit on the city’s fringes, you'll find several wonderful hikes that are perfect for those who prefer a relaxed amble to a major expedition. Lace up those boots, grab a fistful of trail mix, top up your water bottle and head out on one of these easy day hikes near Sydney.

RECOMMENDED: See the sights from behind the wheel on these scenic drives near Sydney. 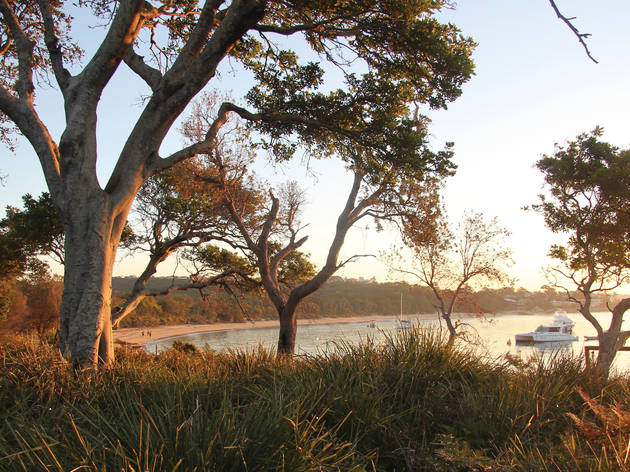 How far? 5km round trip

At the northernmost tip of the Royal National Park, your walk begins at the ferry wharf of the tiny township of Bundeena, most easily accessed via the short ferry ride from Cronulla. The majority of this pleasant hike overlooks the water and includes four beaches, should you want to take a break and feel the sand between your toes. Before circling back along the loop path through denser bushland, you can enjoy stunning views of the Pacific and the distant Sydney skyline across Port Hacking from Jibbon Point.

Time Out tip: Ancient Aboriginal engravings that can be found in rock faces along this trail. Made by the Dharawal people, the traditional owners of the land, some of these artworks date back as far as 4,000 years. 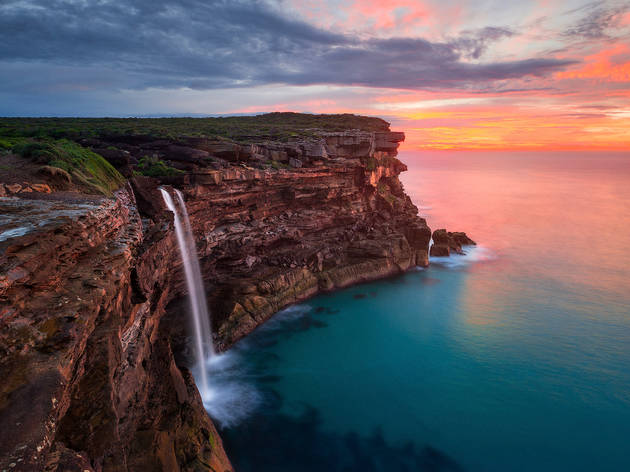 The ridiculously picturesque lagoon, falls and beach at Wattamolla are a pretty big drawcard, as far as the Royal National Park’s natural wonders are concerned. But it also marks the start of a great stretch of the Royal Coast Track that takes you along coastal cliffs, through beautiful salt-blasted heaths and denser bush. You'll emerge at one of the park’s most striking lookouts: Eagle Rock and the neighbouring Curracurrong Falls. Look out for native wildflowers along this hike, such as the ruby-red trumpeted blooms of the prickly fuchsia heath.

Time Out tip: If you want to take a shorter jaunt that doesn’t venture as far from your departure point, the rocky cove at Curracurrang is an often-overlooked corner of the Royal National Park just 1.75km from Wattamolla and a perfect spot for a bit of sunbaking on the rocks. 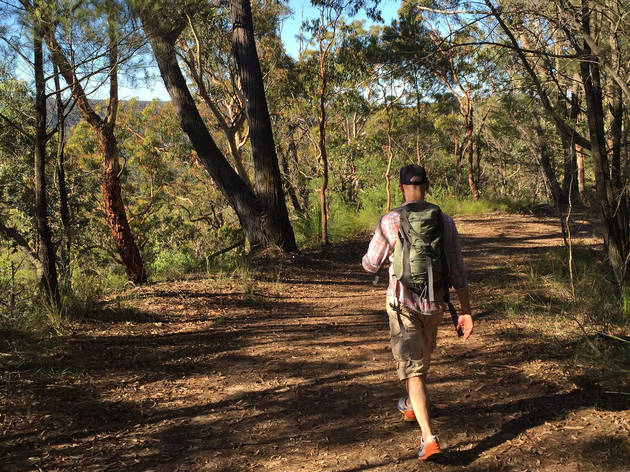 How long will it take? 3 hours

Setting out from the edge of the suburb of Duffys Forest in Sydney’s north, it doesn’t take long for you to find yourself surrounded by bushland that feels a million miles from the hustle and bustle of the city. This trail through the dense gums and eucalypts of Ku-Ring-Gai Chase National Park does feature some elevated terrain, but the majority of the hike is along wide and well-established trails. And while you might break a bit of a sweat on the path’s occasional inclines, you’ll be rewarded for your efforts with breathtaking views of the Smiths Creek valley flanked by lush, forested hills.

Time Out tip: Sturdy footwear is a must, but heavy-duty hiking boots can make walks on an incline a slog. We suggest opting for lighter boots or durable sneakers instead. 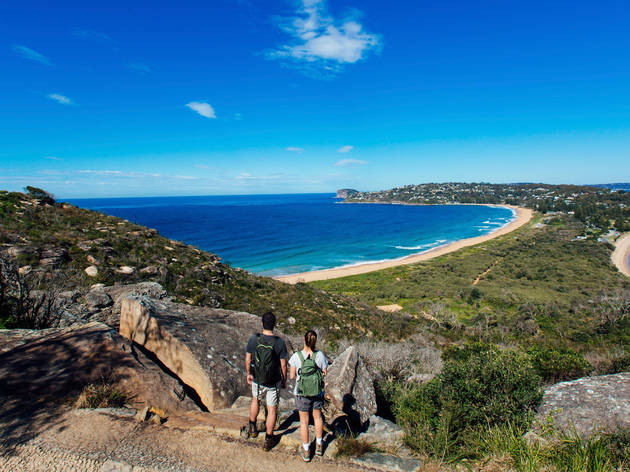 How far? 3km round trip

How long will it take? 2 hours

The insular peninsula of the Barrenjoey Headland is the northernmost point of the Northern Beaches, and one of the most stunning areas of Greater Sydney. When it comes to views, this hike delivers serious bang for your buck. Following the Smugglers Track – so named because it was first established as a thoroughfare for customs officials thwarting the arrival of illegal contraband coming into Broken Bay – you’ll discover the Barrenjoey Lighthouse and an outlook that’s hard to beat. The 360-degree panorama takes in the Pacific, the Hawkesbury River, Pittwater and the sandy stretch of Palm Beach, all in one glorious vista.

Time Out tip: During the winter months into early spring, the vantage point from the lighthouse is one of the best places to see humpback whales anywhere in Sydney. 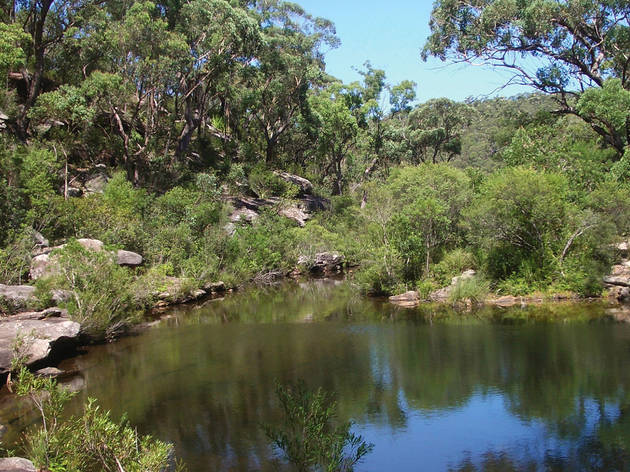 How far? 10km round trip

This is perhaps the most ambitious day hike on this list, but well worth the effort. The good news is that this trail through the Royal National Park is easily accessible by car or even public transport. Setting off through the heathlands near Heathcoat station, there are several beauty spots that act as excellent punctuation to the trek, including the emerald waters of the Karloo pool and the gentle cascade of the Uloola Falls.

Time Out tip: Why not make a weekend of it? The Uloola Falls campground has toilet facilities, but you will need to provide your own drinking and cooking water and be mindful of fire bans that might be in place. 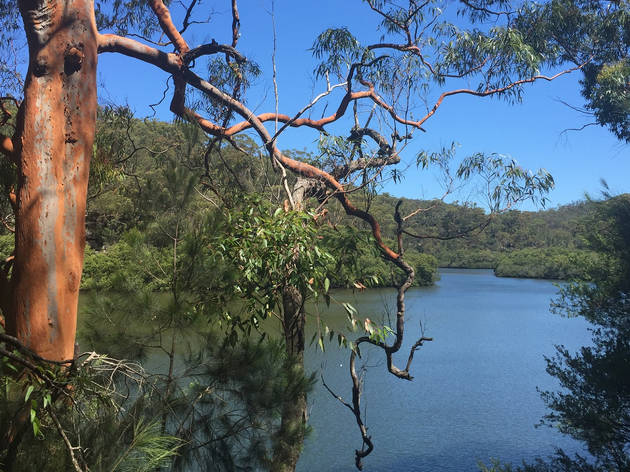 It may be one of the shortest trails on this list, but what the America Bay trail lacks in length it more than makes up for in natural wonder. Barely an hour from the CBD, this track through the heart of Ku-Ring-Gai Chase National Park is lined with scribbly gums, bloodwood trees and at certain times of year, delicate wildflowers. As you emerge from the scrub, the trail will bring you to a babbling creek that cascades over a rocky platform that overlooks the bay with views of Cowan Creek beyond. It’s a perfect spot for a secluded picnic or to indulge in some sunbaking during the summer months.

Time Out tip: This has to be one of the most photogenic views in the whole national park, so this is definitely a hike for any budding photographers out there. 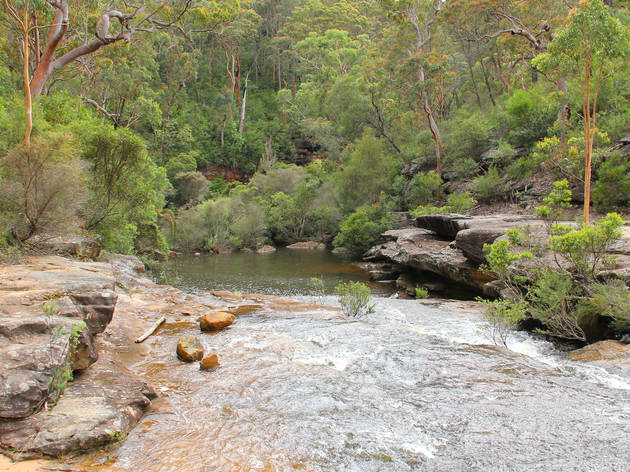 How long will it take? 2 hours

This short but steep trek through Dharawal National Park is a great walk any time of the year, but for those who are partial to a dip when the warmer months come around, this trail really comes into its own in summer. You’ll emerge from the forest into a clearing with a beautiful freshwater swimming hole, fed by O’Hares Creek, at its heart. You can take the plunge into these inviting waters from the small cliffs surrounding it, or else bush-bash through the undergrowth to the water’s edge. This hike is particularly good for sighting native fauna, so keep your eyes peeled for the birds and animals who call this corner of Dharawal home, particularly the incredibly adorable long-nosed potoroo.

Time Out tip: It's recommended that you don't swim immediately following rain, as the levels of silt and run-off from the forest floor are at their highest after a shower. 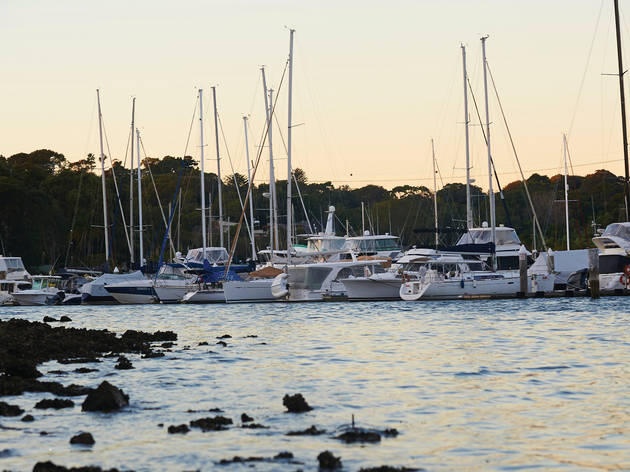 If you’re looking for a hike that will get in an impressive number of steps without venturing too far from creature comforts, this is the trail for you. Tracing the edge of the Narrabeen Lagoon just north of Dee Why, there are plenty of rest stops, communal facilities like picnic tables and barbecues, and views over the water that are thoroughly Insta-worthy. As the track heads towards Pipeclay Point, there are short stretches that offer a taste of bushland while remaining only a stone's throw from a decent flat white and croissant. The track is wheelchair accessible and mostly flat, so it’s perfect for young families or people with limited mobility.

Time Out tip: Don't miss out on a visit to Narrabeen Beach while you're in the area. It's a beautiful stretch of coast with breathtaking views of the Pacific.

Get a sweat on 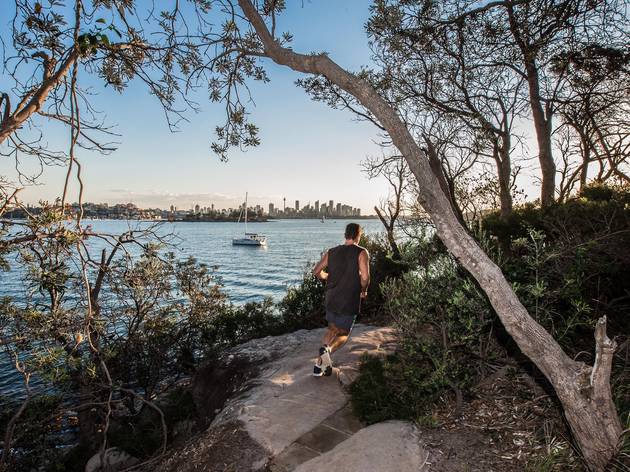 Quicken that pulse, feel the burn and conquer these lakeside, cliffside and parkside runs in Sydney.