My Account My Profile Sign out
My Account
Search
Worldwide South Pacific Australia Sydney How does it feel to go back to the theatre in Sydney? We reveal all
Advertising

As public life in Sydney gets back into the swing of things, there’s a lot about going out that feels almost as it did before. Albeit with some added planning required, mandatory check-ins, and the ubiquitous presence of hand sanitizer. The return to the theatre has been an especially tentative affair, as each theatre company and venue is held to audience restrictions and makes its own determinations on how best to implement regulations. There’s mandatory masks, vast gaps in the audience, and a mixed chance of the bar being open.

When arts editor Stephen Russell spoke to industry leaders in September about what the return to theatre would look like, Sydney Theatre Company (STC) artistic director Kip Williams was hopeful about audiences settling in to the new way of going to a show. “There’ll be some adjustment, but humans are incredibly adaptive creatures,” he suggested. “We’ve seen it in the first days and weeks of [lockdown]. We adapt very quickly.”

He argued that theatres would be one of the most controlled public spaces. “This is an environment where everybody is sat still. Everything is cleaned, it’s incredibly controlled. And so if people are going to venture out of their homes, coming to the theatre would have to be one of the safest things you can do.”

So how does the new normal of theatre-going stack up? With a few post-lockdown productions up our sleeves, members of Time Out Sydney's editorial team reflected on how we really feel about masking up and checking in for an evening of physically distanced theatre.

The 'theatrical mask' takes on a new meaning

The first show I saw after lockdown was the play that technically reopened theatre in Sydney (though dinner and a show returned with Darlinghurst Theatre Company’s Red Carpet Cabaret on June 12). An off-Kings Cross staging of an off-Broadway hit in the basement of jazzy piano bar the El Roco Café, The Credeaux Canvas (July 25 - September 27), presented by Lambert House Enterprises, was an intimate affair featuring betrayal, a love triangle, an art hoax, and full-frontal nudity. It was a shock to the system to see live actors again, let alone in the close (but physically distanced) proximity of the underground room. After months of bingeing on the small screen in isolation, I had to hold myself back from vocally exclaiming at the stage in the same way I would at unfolding drama on my television. On the opening night, the mandatory face mask was actually comforting, providing a sense of anonymity as the cast of four bared their souls (and, for a couple of them, their bodies too). We were allowed to slip our masks under our chins for intermittent sips of our house wines from the bar upstairs, though, and sit next to our friend. The cash-only situation at the bar came as a surprise at a time when cashless payments are the status quo.

A couple of months later, walking into the Seymour Centre for Griffin Theatre’s first post-lockdown outing was an at once isolating and unifying affair. 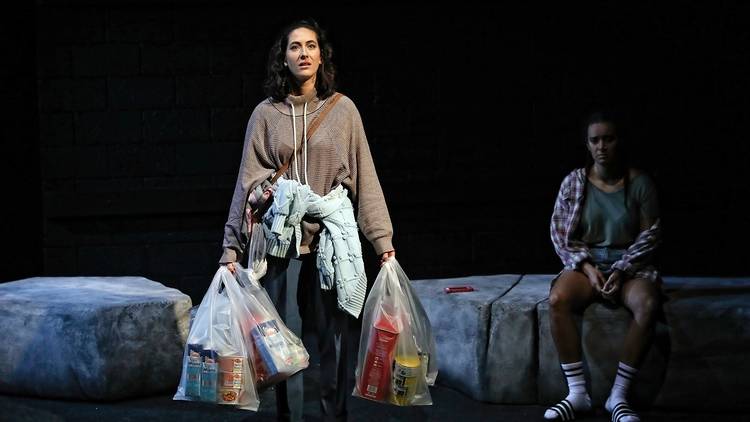 Superheroes (September 25 - October 31) is a play about two women on opposite sides of the world living small lives in a time of big politics. The sign-in process was thorough, but the bar was open, face masks were not mandatory, and the seating in the mid-sized Reginald Theatre was spaced without feeling too barren. Welcome drinks from Archie Rose Gin were picked up on the way into the theatre, and we were express-checked in on iPads (the box office was out-of-office). A hand-written card on my seat with my name on it welcomed and thanked me for daring to venture to the theatre.

The same earnestness came from the lead actors, Gemma Bird Matheson and Claire Lovering, who broke character before they were even in-character to greet us and express empathy for the strangeness of going to the theatre now. But admittedly, for me, it was already not feeling too weird. The resurgence of dinner theatre meant I was already a fist-full of burlesque and drag shows into the new normal. On the way out, thank you treats from Bourke Street Bakery were a sweet finish. Visible sponsorship coming from local businesses in these strange times doesn’t have the same soullessness as promotional products handed out by major brands in the Beforetime. It was evident that a village had assembled to see this production come to light, and that the audience was just as important as the sum of all its parts.

Attending Sydney Theatre Co’s first post-lockdown show Wonnangatta (September 21 - October 31), on October 6, I was curious as to what differences I’d notice compared to Sydney editor Maxim Boon’s attendance on opening night in September. He said: “With masked audience members dotted sparsely throughout the cavernous auditorium of the Roslyn Packer Theatre – our temperatures scanned on entry, ushered quickly through sterile foyers, past rows of strapped down seats – a sense of isolation and otherness already hung in the air before the first syllable of Angus Cerini’s Wonnangatta was ever uttered.” 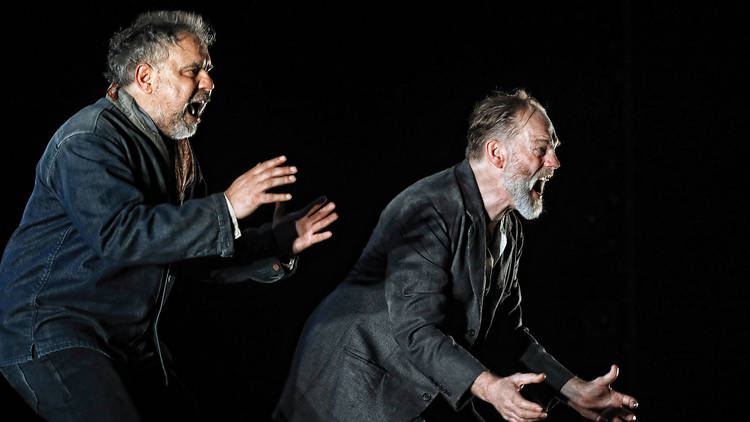 By the time I attended, capacity limits had already increased from about 30 to 50 per cent full, only about two weeks after this show opened. It also allowed attendees who arrived together to sit in pairs (revolutionary), which was not allowed initially. Mask wearing and laser-pointed temperature scans were still mandatory on arrival, but the screen displaying temperature maps of every audience member as they walked into the building was absent, taking the dystopian, pseudo-body-shamey vibes down a notch or three. The empty bar and lack of intermission still felt strange, but the emptiness of the theatre added to the barren atmosphere depicted in this Australian gothic. The majesty of the 896-seater theatre was not lost, even when the audience number is capped at 246.

One wonders if, had theatermakers known what was coming, they might have prepared shows more hopeful and joyfully escapist than the modern quandary laden Superheroes and the resolution-less Wonnangatta, or the impassioned polemic of Virginia Woolf with Belvoir’s return, A Room of One’s Own? Staff writer, Divya Venkatarmaran, headed down to this Surry Hills theatre to get a vibe on the modern adaption of the feminist tome.

“Belvoir Theatre’s artistic director Eamon Flack took the stage before the actors on the opening night of Clarissa Licciardello's production of A Room of One's Own, and gazing out at a scattered and masked-up audience, he quipped that he didn’t think he'd ever be so happy to see a theatre one-third full,” Venkatarmaran says. “I could see his point. I didn't think I'd be congratulated on my body temperature walking into a theatre ("36.2! Go you!") but here we are. Between that and taking sizeable gulps of Sangiovese while watching the show – ostensibly in order to reduce the time spent wearing it as a chin sling, but it was smooth and eminently drinkable – plus watching theatregoers slip on chic, $45 floral Romance was Born x Belvoir Theatre masks before entering the theatre, it really was the new norm. The drama was playing out around us, as well as on stage.” (Belvoir's neat explainer video further illustrates what to expect when attending a show.) These simply (but artfully) staged shows with minimal casts are one of the most viable ways to get the industry up and running. But beyond the logistics, there's an edge of catharsis to the minimalistic gems that mark Sydney theatre’s reawakening. From the sliver of ‘moonlight’ illuminating an initially reluctant nude model in The Credeaux Canvas, to Hugo Weaving disappearing from view and reemerging during a scene set in a treacherous fog deep in the bush in Wonnangatta, there’s magic here. The stillness, the simplicity of staging and lighting, allows room for the performances to permeate the space. The absence that makes the heart grow fonder.

Ready for a show? These are the best live performances in Sydney.