While you may only know Lake Macquarie for its expansive body of water, this unassuming region sandwiched between Sydney and Newcastle has a lot to offer city folk looking to slow down and get back to nature. And, with the kind of unflappable locals who welcome all sorts as potential new neighbours, you’ll want to stay much longer than 48 hours.

If you can bring yourself to depart, you'll find more chill vibes and challengening adventures on a trip to the South Coast, and an incredible wine time in the Hunter Valley.

RECOMMENDED: The best places to stay in the Blue Mountains.

Saddle up for forest horse riding 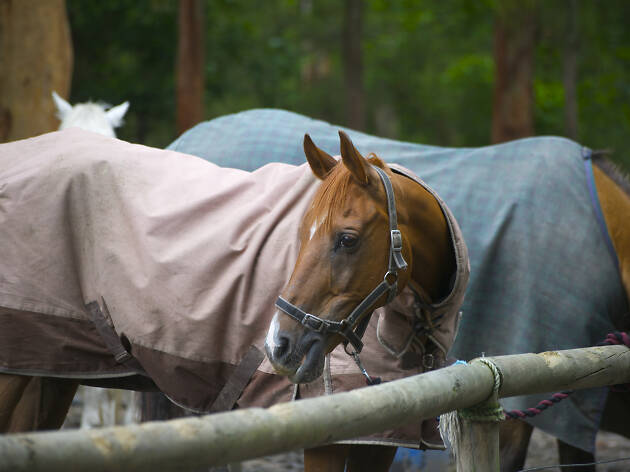 It would be logical to assume that your first adventure on a lake and seaside retreat should be some kind of water-based activity, but there’s nothing we would recommend more than a trail ride with AAA Horse Riding & More. Salt-of-the-earth owner Wayne Hegarty introduced his herd of 30 gallopers to the public more than 20 years ago and his team of guides and assistants have similar Saddle Club-level skills. After a basic horse meet-and-greet, you’ll start your journey through the foothills of the Watagan Mountains, ambling, trotting and cantering under palm tree canopies, along lush fern pathways and through skinny gums stretching skyward. You could be in a horse conga line of ten or two riders on any given trip, but the AAA team will cater to your timeframe and skills. Oh, and there’s a troupe of ten-or-so farm dogs who might accompany you on your adventure. 252 Mount Nellinda Rd, Cooranbong 2265. 02 4977 2245. Daily 9am-5pm. $25-$290. 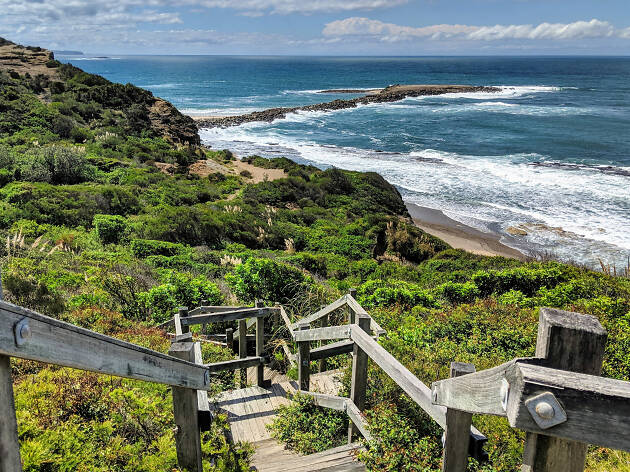 Ah, now the salty breeze is hitting your lungs. This 5km return walk meanders along the cliffs above Caves Beach and out to Pinney’s Beach in Wallarah National Park. You could power walk this beauty in under two hours, but you’ll probably want to slow it down to take in those ridiculously picturesque views. In the warmer months, stop for a dip at Spoon Rock Bay (after you’ve held your nose passing the aptly named, seaweed-stroon Stinky Point), or in winter spy humpbacks and southern right whales from the vantage point at Quarries Head. While the trail switches between grassy goat paths, dirt roads and boardwalks along the way, it’s clearly marked and sees nowhere near the foot traffic of a seaside Sydney hike. If the strong coastal wind awakens the stoic explorer within you, you can satisfy rugged adventurer impulses by going off-trail and exploring the sea caves and rock faces on the route. Start at 140 Caves Beach Rd, Caves Beach 2281.

Become a skipper on the lake 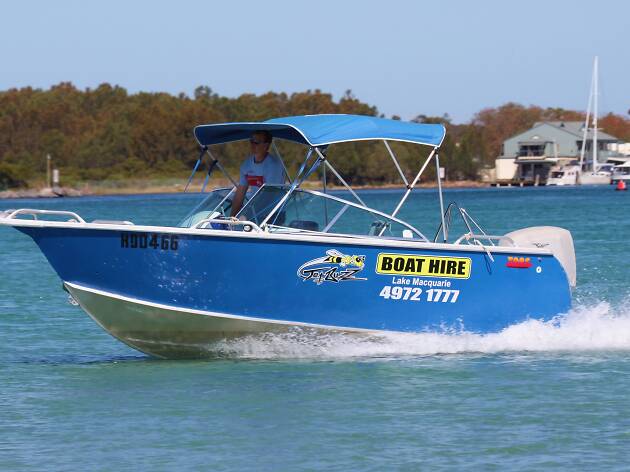 Ever dreamed of becoming a sea captain? The 110km² of calm waters within Lake Macquarie’s boundary are probably a good place to start – there are minimal waves and happy hobby sailors to help guide you if disaster strikes (read: you run out of fishing bait). The folks at Jetbuzz Watersports have all manner of lakeworthy vessels, from kayaks to stand-up paddleboards, barbecue party boats, charming tinnies and even jet boating for thrill-seekers. But if you’re new to life on the big blue wet thing, you’ll want to take a spin in their runabout boats, which you don’t need a boat licence to captain (but skippers will need a driver’s licence). These cute little ships can hold up to six people, and you can hire them for a two-hour fishing trip or pack a lunch and spend eight hours exploring the southern end of the lake. The salty skippers at Jetbuzz will give you all the safety info necessary for navigating the lake, but the main rule to remember is no skylarking: that’s sailing code for don’t be a silly bugger. Lorikeet Loop, Cams Wharf 2281. 02 4972 1777. Daily 9am-5pm. $30-$550.

Eat and drink by the beach 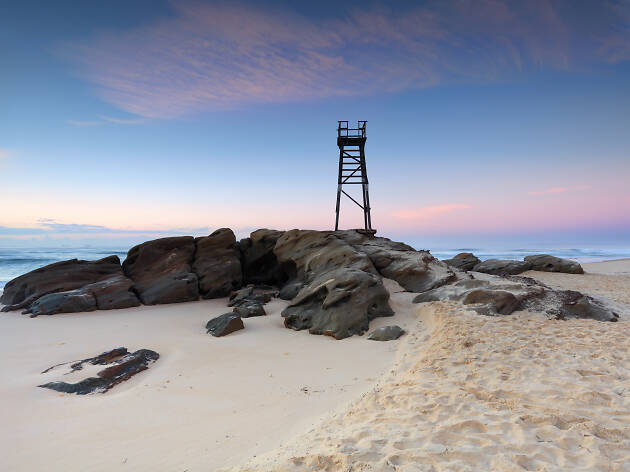 Make the most of Lake Macquarie’s easy-to-access stretches of sand (it ain’t no busy Bondi) and dine by the beach. Our pick for brekky is Cargo Espresso Bar (2A Beach Rd, Redhead 2290). The craggy cliff-meets-blustery-waves view is immense, and the super chill staff will even make you a chicken schnitzel roll with chips at 8am if you ask nicely (we did). For dinner, wander over to relaxed beachfront venue Caves Coastal Bar and Bungalows (27 Mawson Cl, Caves Beach 2281). The fairy-lit outdoor deck is a perfect spot to watch lightning storms roll into shore as you crunch through share plates of zingy crisp chicken wings and piping hot pumpkin and sage arancini. 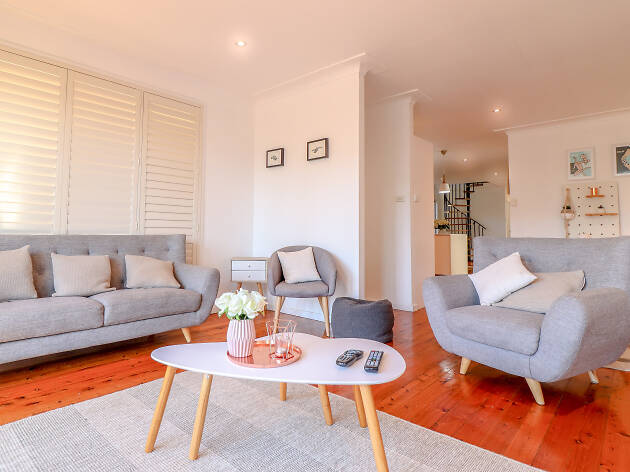 This massive property just a few streets up from Caves Beach is an absolute winner for groups of holidaying friends or an active family. While a few rough and ready rennos have clearly taken place over the years, it’s got stellar outdoor entertaining areas, a schmick heated pool, multiple modern bathrooms – we love a proper adult-sized tub – a grand kitchen and a hideaway mezzanine for seclusion and sunrise views. Pacific Beach House, 31 Pacific St, Caves Beach 2281. 02 4971 3373. $380-$420. 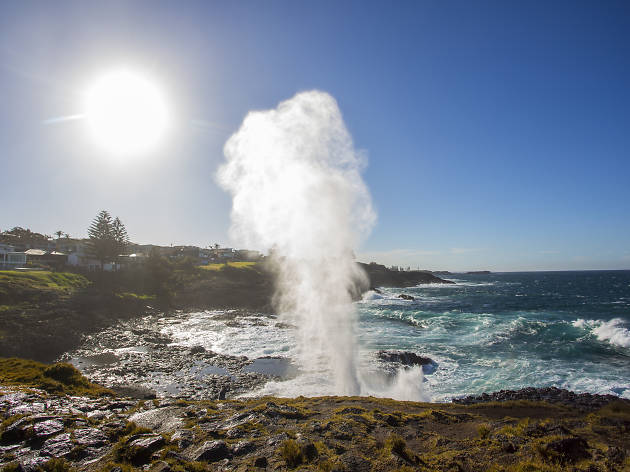 There’s something so satisfying about seeing a coastal blowhole erupt. It’s like nature’s own dolphin show – we sit, listening to the rumble of the ocean and wait for the eruption of misty salt water spray. Here are some of the coolest blowholes to check out around New South Wales.