Charoenkrung is iconic for many reasons, not the least because it is home to the first asphalt road built in Bangkok, constructed in the 1860s during the reign of King Rama IV. The area also served as a hub for international trading, thanks to its proximity to the Chao Phraya River.

For that reason, Charoenkrung was considered a culinary melting pot, where the traditions and customs of different cultures, from Chinese merchants to British diplomats to Persian traders, were thrown and mixed together.

Bangkok’s port relocated to another district decades later, but Charoenkrung’s multicultural charm never faded. The many international influences seen in the area have made it the perfect place for creativity to flourish—art galleries, as well as progressive restaurants and bars, have emerged along the main drag in recent years, giving a breath of fresh air to an area that is also home to long-standing mom-and-pop shops and street food stalls.

Here’s a guide on how to best explore this culturally diverse neighborhood.

RECOMMENDED: Get inspired at 10 best art galleries in Bangkok, or 'Reconnect With Your City' and explore more diverse neighborhoods. 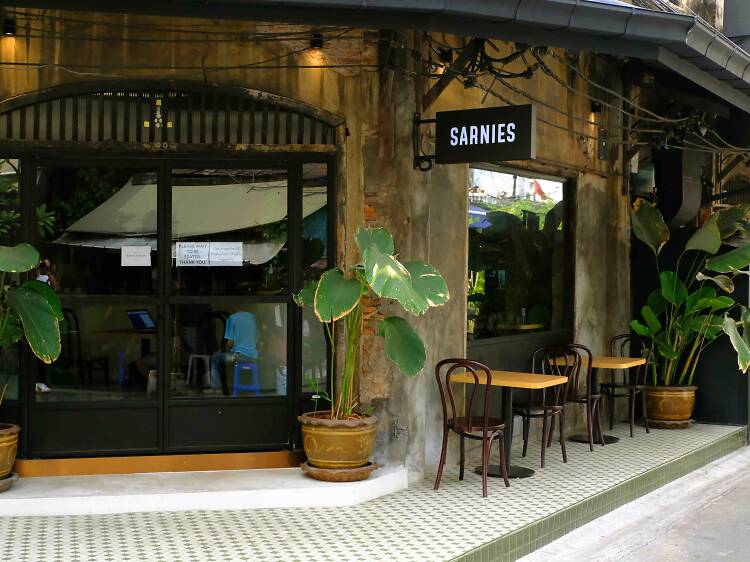 Hunt down the perfect breakfast

Eating is an essential part of every Bangkok experience, and Charoenkrung has been a mainstay on this front for both locals and tourists. Try to get up early and explore its food scene, which has everything from pocket-friendly eateries like Tuang by Chef Yip known for its scrumptious dim sum, Prachak Roasted Duck for legendary Chinese-inspired BBQ duck and pork, and Michelin-recognized Jok Prince for rice congee.

Charoenkrung is also known for many hip hangouts where you can get a good cuppa, delectable pastries, and western-style brekkie. Get freshly baked sourdough at Sarnies on Soi Charoenkrung 44, and head to La Cabra in Talad Noi to try a Scandinavian-style coffee experience.

Most of the dining and drinking spots here in the hood are open from dawn to dusk, so you can take your time to enjoy Charoenkrung and its many culinary delights.

Tips: “Explore Charoenkrung in a different way, hop on a tuk tuk to Si Phraya Pier and get on the public boat! Alternatively, you can take the hop-on, and hop-off service, which is available from 9am to 8.30pm, to visit famous attractions along the Chao Phraya River. For better views, head to our M Club executive lounge and Yao Rooftop and enjoy some drinks. To unwind and relax, grab a seat from our lobby and soak up the stylish interiors.” — Kanda Chukachon (Aom) | Chief Concierge, Bangkok Marriott Hotel The Surawongse 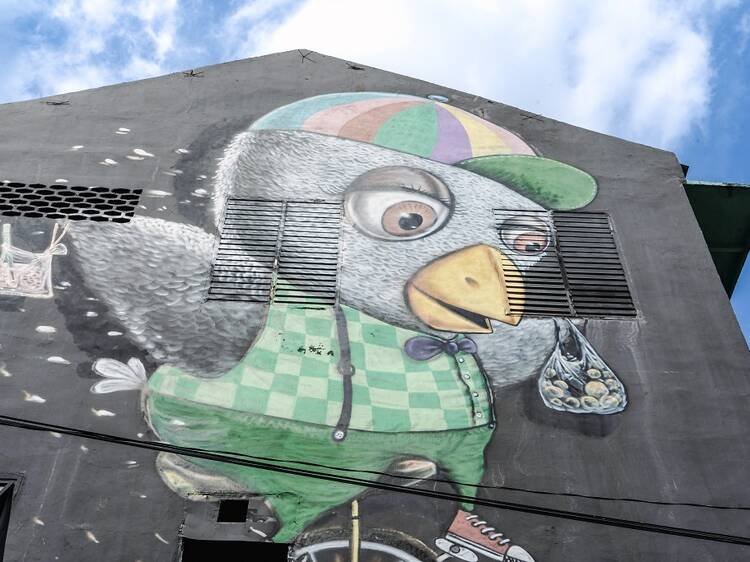 After you get your fill of a hearty breakfast, walk around the neighborhood for some art inspo. Art is alive and kicking in Charoenkrung, and you can appreciate both commercial and indie art at the many galleries here. Popping on top of our list is River City Bangkok, a riverside art center on Soi Charoenkrung 24, where both mainstream and alternative artists take turns to showcase their works in big and small spaces.

Just a four-minute walk from the riverfront’s center is Warehouse 30 on Soi Charoenkrung 30. The mixed-use creative complex is filled with art and creative joints where you can immerse yourself in trendy designs and mingle with a crowd of hip kids. Stroll a bit for five minutes, and you will be hugely impressed with the Brutalist-style Grand Postal Building, which is home to the Thailand Creative & Design Center (TCDC), where you can take a small break in the peaceful ambience (with an AC to cool you down, of course). Uncover the city’s amazing street art hidden in the alleys like Soi Charoenkrung 32. 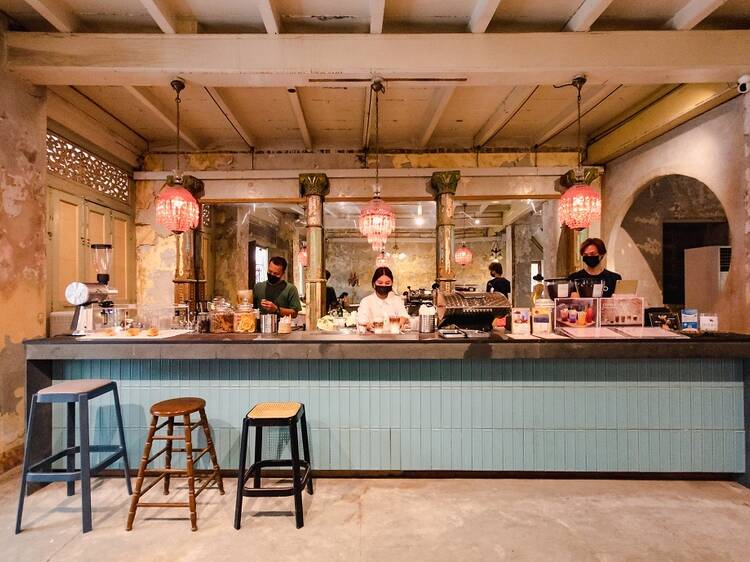 Right after you explore the creative side of Charoenkrung (and also fill up your energy at café-slash-gallery Madi opposite to Grand Postal Building), it’s time to get back on our feet and uncover the old charm at Talad Noi.

The maze-like alleys of this small community near Chinatown is home to beautiful architectural structures, such as an old house-turned-café Patina Café, riverfront wooden house Baan Rim Naam, and the 100-year-old Chinese So Heng Tai residence. Within a few minutes from these architectural wonders lie two popular Chinese shrines—Rong Kuek Shrine and Chowsuekong Shrine—where the locals come to pray for good fortune. 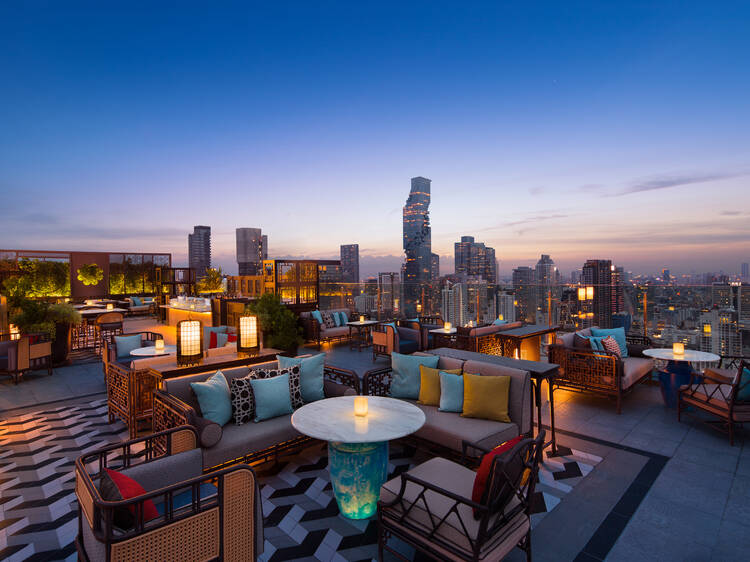 End your day with an award-winning dinner and creative tipples

After a long day exploring Charoenkrung, treat yourself to the best dinnertime experience and go all in at the hood’s Michelin-awarded restaurants, namely 80/20 and Aksorn, for modern Thai fine dining.

Don’t let the night end without a nightcap at Tropic City for lip-smacking drinks, Mahaniyom for sustainable cocktails, and Sirimahannop at Asiatique for fruit-based concoctions in a nautical setting. There’s also Yao Rooftop Bar at Bangkok Marriott Hotel The Surawongse that only takes you less than ten minutes on tuk tuk from the Grand Postal Building. Here you’ll find one of the best sky-high hotspots with the top-notch vistas of Chao Phraya River. 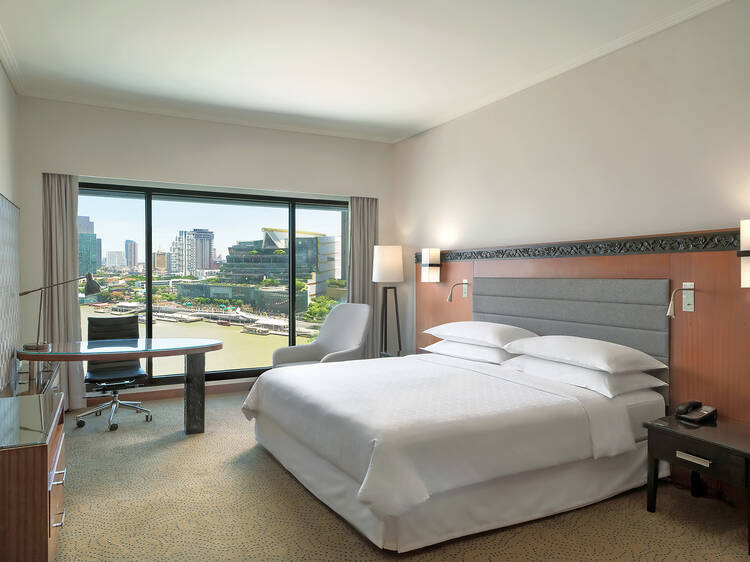 Complete your Charoenkrung experience with a comfortable stay at two Marriott International establishments: the timeless riverside hotel Royal Orchid Sheraton Hotel & Towers, where warm and thoughtful Thai hospitality and picturesque views are highlighted alongside long-established restaurants like Giorgio’s and Thara Thong; and Bangkok Marriott Hotel The Surawongse, the relatively new and notable Marriott hotel in Surawong where you can hop on a tuk tuk to nearby hotspots like Silom and Charoenkrung within a 10-minute commute.

Explore Bangkok’s vibrant and imaginative neighborhoods with 'Reconnect With Your City' and fall in love with Bangkok's diverse districts. Discover the distinctive brand portfolio of Marriott Bonvoy in Bangkok and relish memorable travel experiences to worldwide destinations.

Become a member and find more information about the program at marriottbonvoy.com.