“I don't want to have to apologise to somebody for making them look like a car crash, so I just use myself”

From working in a shed in the back of his parents’ garden to winning the BP Portrait Award, Antony Micallef’s career has gone from strength to strength. Hannah Hodson sits down with the artist to discuss his latest exhibition

“I had always wanted to make this work, but I never had the dexterity or the balls,” laments the critically acclaimed Antony Micallef when speaking of his new exhibition, Raw Intent. The collection at Pearl Lam Galleries comprises works built with layer upon layer of oil paint that rise off the canvas into grotesque, almost three dimensional heads, set against 18th-century inspired backgrounds. A ballsy effort, indeed.

Micallef’s professional ambition can be traced to growing up in Swindon, a large town just outside of London, which he affectionally mocks as a ‘cultural desert’. “I think when you grow up in those sorts of quite narrow-minded places, where if you’re different in any way you just don’t really fit in, it makes you want to do what you want to do even more, because you want to never really go back,” he reminisces.

Despite not coming from an artistic family, Micallef’s talents were always encouraged. In fact, his father, a metal worker, transformed his garden shed into an art studio for him after he graduated from the University of Plymouth. “My parents didn’t ever understand what I was making, but I think [they thought] if I was happy and not outside causing trouble, that was fine,” he says. “But they always wanted me to paint a landscape. They were very Catholic, so wanted religious pictures – I’d always want to paint the opposite, the darkest things that I could think of.”

Known more for his rather political art, such as a famous show in Bethlehem satirically titled Santa’s Ghetto, this exhibition marks a diversion. Micallef explains: “This body of work is about the mechanics of paint and it’s about trying to capture something that’s very visceral and fleeting, and giving it life on a canvas.” Indeed, the honest and impulsive nature of the works is evident, not only in appearance but in the very way they are constructed, almost completely absent from control. 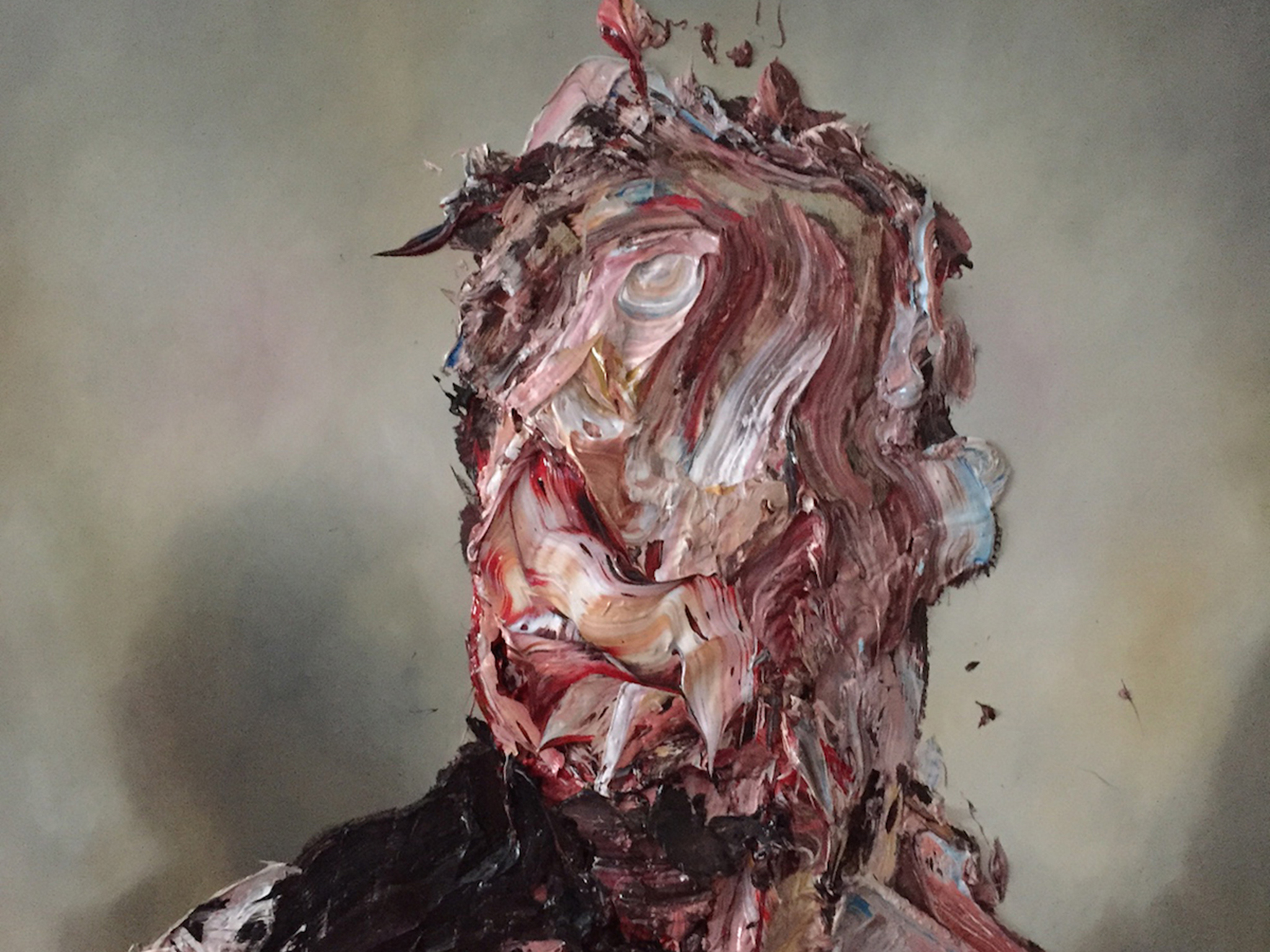 “I always wanted to create Raw Intent,” adds the London-based artist. “I mean, I’d always see flashes of the images in my head, but I had to fully commit. You can’t sort of half make it. Once you’ve committed to throwing thousands of pounds worth of paint, you’ve got to do it.” This is a huge financial outlay given the fact that Micallef throws oil paint by the tinful to create the richly textured images in these paintings.

“They’re really physical. If I move my hand slowly, the paint will behave differently, so I hit the canvas really hard, sometimes from metres away, and I use literally every tool I can to get it to go in the direction that I want,” Micallef continues. “They do appear aggressive, but it’s all intentional and that’s just how I want them to be. I want the mark making to be defining and I want them to appear strong. It feels sort of like a fight.”

This presents a clear contrast to the way in which the 41-year-old creates the backgrounds for these paintings, which Micallef likens to ‘a nice country drive’. “The backgrounds take weeks to prepare. I can listen to music when I work on them or I can listen to the radio or an audio book,” he details. “They’re a combination of poppy oils and then you glaze it and you glaze it again, so they get that really smoky, sort of translucent look. I was looking at lots of old masters’ backgrounds to get that feel.”

While the depictions of figures set against smoky backgrounds create a stunning contrast, it’s the heavy red paintings that have made perhaps the greatest impact on Micallef’s journey as an artist. “The red paintings were a real surprise to me. Sometimes you can be too considered about what you do,” he says, “and generally, that’s the thing with life. But sometimes you just have to trust what it is and, as with these works, something really great can happen. It’s great when it works but it’s soul destroying when it doesn’t.”

Studies of paint rather than self-portraits, the exhibition starts with Micallef’s own image. “It’s just really easy”, he explains. “I can have a canvas on the wall and a mirror and it’s there and it just works. From the way I throw all this paint around I think [a different] sitter might have concussion by the end of it!” He continues by stating: “I just want to do what I want to do. I don’t want to have to apologise to somebody for making them look like a car crash, so I just use myself. I can do whatever I want to my own face, and it’s practical and it’s instant and it’s just, like I said, I use myself as a vehicle to find other things.”

While the aesthetic of Raw Intent and the concept behind it is markedly different from the political art that arguably put him on the international map, it’s not too dissimilar from his last exhibition, Self. Both exhibitions are loosely based on Micallef’s own portrait, yet the pieces in Self were described as self-portraits, whereas the paintings in this exhibition, the artist states, are ‘their own entities’.

“Self was the starting point and now these pieces have come on and become more of themselves. The mark making has become more sophisticated. I’ve learned how to use my tools more,” he muses. “But with these, I didn’t want to call them self-portraits. I’ve used myself as a model to understand where the light hits my face, but they’re not me and that’s why they’re all called Raw Intent and they’re numbered.” Though this change didn’t come right at the very beginning, Micallef adds, amusingly: “A few of them are called portraits, because I switched after I painted them and didn’t want to change the names. It’s funny, when you have paintings they’re a bit like your children and if you give them a name you can’t change it. It’s bit like saying ‘now you’re Samantha, you’re not Sarah any more’, so it just feels wrong. There’s that history of what they are.”

Evoking somewhat dark imagery, Micallef summarises the show by stating: “A good way of expressing Raw Intent is your eyes are shut and you’ve got your hand in earth and you’re pulling things out and they appear like that – they’re all very, very different.”