The city’s latest tourist attraction, the Hong Kong Observation Wheel, has sprung up on the Central Harbourfront. But why on earth is it even there?

A Ferris wheel – by definition – is a giant vertical revolving wheel with passenger cars suspended on its outer edge, with the intention of affording views that would be otherwise impossible to enjoy. So then, what panoramic vista is one afforded when a Ferris wheel is placed among a topology that makes said fixture look like a cocktail sausage at a bratwurst convention? Not much it would seem.

The wheel is the brainchild of Swiss AEX, a company that operates something similar in Bangkok and has been ‘operating wheels around the world for over a decade’, according to its proposal document issued to the Central and Western District Council, back when this was all but a giddy revolving fantasy. The idea of an observation wheel at Ocean Terminal in Tsim Shai Tsui was first mooted back in 2001, and the concept has resurfaced several times in the interim. Well now the fantasy has arrived, by way of a 60-metre-high stroke of boardroom- silencing brilliance that allows you an ‘unobstructed’ view of the harbour front for a mere $100 per ride. We guess those waist-high railings separating us from the view have been a real eyesore until now. The wheel, which was constructed between May and September this year, sits squarely on the Central Harbourfront, in front of piers nine and 10, and our latest tourist attraction seeks to follow in the footsteps of the London Eye (135m), the Singapore Flyer (165m) and Vienna’s giant Ferris wheel (similar in size, but is 115 years older).

But its opening has been shrouded in confusion ever since the three year contract was awarded to Swiss AEX back in May 2013, allowing the firm to operate the wheel for $850,000 per month. It was over a year before construction began, and requests for information or interviews with Swiss AEX were deftly de ected. The Hong Kong Government and its advisory body the Harbourfront Commission have very different views on the subject. For the government, this is a stretch of valuable land that can be leased to the highest bidder. Nicholas Brooke, chairman of the Harbourfront Commission, is a longtime champion of the waterfront. As it stands at the moment, the body is only able to ‘comment and suggest improvements and enhancements on any project that the government or companies within the private sector wish to start’, as Brooke puts it. In other words, the commission has no executive powers whatsoever.

“If there’s an example of why we need a Harbourfront authority, [the wheel] is it”, says Brooke. Though he’s not particularly abhorred by the idea of the wheel itself, Brooke acknowledges that the role of the advisory body needs to be bigger if the harbourfront is to be used to best advantage. “If we’re looking for long term solutions, my ambitions would be to do something far bigger and better than the wheel,” Brooke tells us. “But to do that you need to offer people longer term tenancies, partner with them, the whole approach needs to be different. That’s why we need the authority.”

The ideal scenario for the commission would involve the shifting and parity of veto and approval powers to those that have cultural value as their main agenda as opposed to commercial gain, giving power to those that view the harbourfront as one of our most precious cultural artefacts.

There has been what could euphemistically been described as a mixed response to the wheel on local websites and forums. Our own myriad attempts to contact the firm behind the wheel for interviews and information resulted in a big sweet blank. Why is such a potentially big tourist attraction so reluctant to talk? “I suppose the sensitivity around the commercial terms is that you’re dealing with government, who operate in a very constrained environment. So it doesn’t surprise me that they’re being reticent,” says Brooke.

Hong Kong is the tallest reaching city in the world, and it would take a fixture of comical size to offer the same expansive views that low-rise London’s counterpart gives. The issue is not really ‘why the wheel?’, but the fact the government is saying ‘why not?’. The harbour is a precious piece of space and beauty that is becoming ever-more rare in the city. In the meantime, the wheel – which was supposed to open in September the last time we heard anything – still sits still and unused. To paraphrase Swiss AEX: no comment. 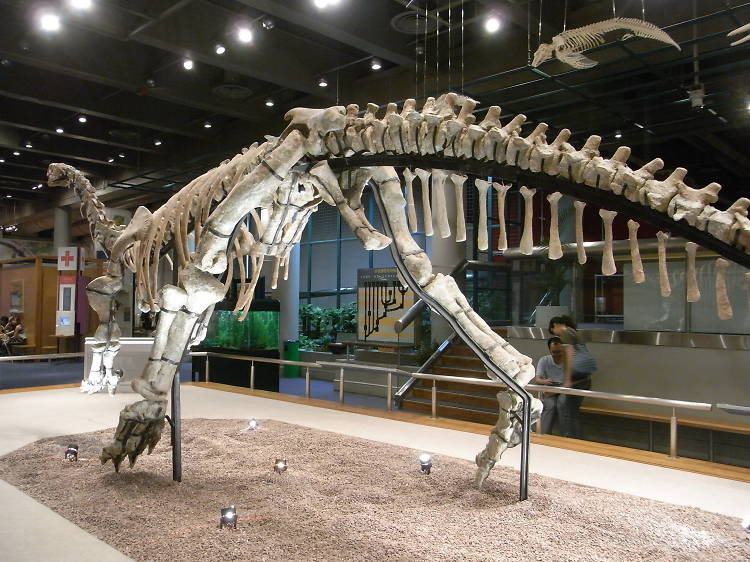 Our pick of the best museums in Hong Kong and the exhibitions they have on offer.