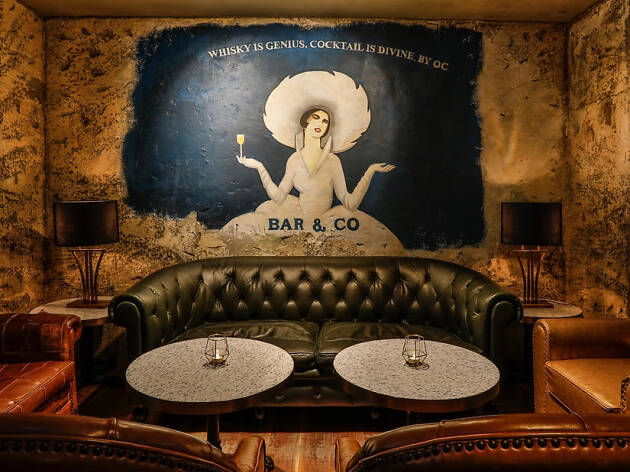 One of the most popular cocktail breeds in Japan, the highball is a mix of a spirit and a larger portion of a nonalcoholic mixer. While plenty of drinks fit this classification – a G&T and yes, even a Jack and coke, technically belong to this family – the highball is enjoying a new spot in the limelight, fuelled in part by the new-found popularity of the whisky highball in the United States. It started in 2017 when Williamsburg hipster hotspot Kinfolk 90 became the first bar in New York to have a highball-making machine (supplied by whisky distiller Suntory, no less). That kick-started a surge of interest in the cocktail in America and within a year, the New York Times was declaring the summer ‘highball season’.

The highball trend is slowing picking up here in Hong Kong too and The ThirtySix is the newest space to jump on train, after Black Sheep’s take on an izakaya, Fukuro, beat it to the punch last year. Sitting above Hollywood Road, this new concept occupies the spot formerly belonging to whisky and cocktail bar Angel’s Share. The physical layout is nearly identical, though the décor has changed substantially. Where Angel’s Share had a uniform gentlemen’s-club vibe, The ThirtySix is a somewhat incoherent mishmash of styles. The place takes its drinks seriously but serves them on light-up coasters that look like they belong at Levels or Drop. The furniture, also, is a mix of clubby tables and stools and deep leather chairs that look like they were left behind by the previous tenant.

The menu is relatively brief, featuring nine types of highballs and a smattering of beers and wines. We get underway with one of the more classic options available, the Hojicha Mizuwari ($140). Nikka From The Barrel is used as the base and it’s topped up with soda water, black lemon bitters and hojicha tea. The result is very soft, with little in the way of carbonation and a very flat taste. Notes of hojicha do come through on the end but not particularly strongly. It’s a reasonable highball, made with decent whisky, but at that price tag, you’re not getting much bang for your buck. Our second round fares much better. The 21st Century California ($140) – Alipús San Baltazar mezcal, Rinomato Bianco, crème de cacao white, soda water and lemon, lime and oleo cordial – is too complex to be considered a simple highball, but the use of mezcal instead of the traditional tequila adds a pleasant smokiness while maintaining the original 21st Century’s heft. We finish on a lighter note, ordering a Terrior ($140), a mix of St George Terroir Gin, watermelon juice and soda water. It’s light and refreshing as a highball should be, but if it weren’t for its slightly slushy texture, it would be entirely forgetful. The drinks are reasonable here at The ThirtySix but they don’t wow. And while cocktail prices are steep in Hong Kong, $140 is a lot to hand over for the kind of drink that’s a convenience-store staple throughout Japan. We applaud The ThirtySix for taking a punt on a relatively new venture here but for now, the angels can keep our share.

Love this bar - with Proof & Co consulting on the cocktails, a gun team and a stunning decor, they've done well!

Near The ThirtySix Bar & Co