Hong Kong has some of the finest laws in the world – but it also has some of the strangest. Ivan Suen digs deep into our city’s legislation to discover its quirkiest depths. Illustration by Jeroen Brulez and Phoebe Cheng

When it comes to law, Hong Kong’s is top-grade. We may be part of China now, but we benefitted from the import of the English system during colonial rule, meaning our legislation is very much a ‘Hong Kong’ practice. In fact, generations of the brightest judges and lawyers have spilt much ink and chopped many trees to shape it with the times. However, like any jurisdiction, it’s far from perfect. There are plenty of laws related to socially divisive issues that deserve a hefty debate. And then there’s the occasional hiccup in one of our many laws and bylaws that’s just plain funny; mostly colonial hangovers yet to be deleted. We’ve looked through the city’s reams and reams of legislation to bring you the quirkiest or oddly specific actions that would take you afoul of the law. See if these knowledge bombs can earn you a forced chuckle over the dinner table... 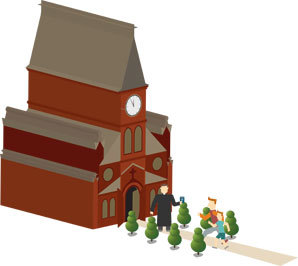 Gate-crashing Sunday service
(Cap 212, s34)
If you’ve seen the 2003 iteration of British comedy Johnny English, you may recall the mortifying image of Rowan Atkinson interrupting a burial and, later, a coronation. You might not be struck down by divine intervention if you pull those stunts in Hong Kong but you’ll certainly feel the law rain down upon you. It’s illegal to ‘obstruct or prevent’ a ‘clergyman or other minister’ from operating in a place of ‘divine worship’ – and it can carry a two-year sentence. Don’t say we didn’t warn you.

Trying out your siege machine
(Cap 228, s14)
The scores of people with cannons in their backyards must feel silly now. If you’ve ever felt the urge to re-enact the Battle of Waterloo with your mates, take it somewhere remote. It’s cool to ‘discharge any cannon or firearm’ – as long as it’s not within 200m of anyone’s house or a road. If you do it twice, ‘to the annoyance of any inhabitant or passerby’, that’ll be a $500 fine, thank you. The law’s probably made redundant nowadays by a little something lawyers call ‘public nuisance’ but it’s still there in our law books. It’s fascinating to know how concerned our forefathers were about people spontaneously whipping out their cannons (not like that!). 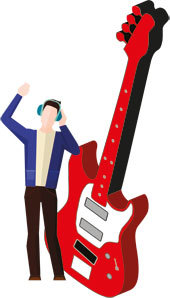 Busking
(Chapter 228, Section 4 (15))
Once upon a time, busking was thought to be a nuisance to the city’s peace and quiet. Now, however, it seems strange for the Central partygoer not to glimpse a few would-be divas belting it out at the bottom of LKF. While the rule is frequently ‘overlooked’ in hotspots such as Mong Kok’s Sai Yeung Choi Street, it’s technically an offence to play ‘any musical instrument’ in the street without permission. Young buskers nevertheless received a hostile response from police in Causeway Bay just last month. Is this buzzkill law long overdue for an overhaul? We think so.

Flying a kite in Central Station
(Cap 556B, Bylaw 28i)
Luckily the invention of platform screen doors preceded the birthday balloons trend or this little bylaw might actually be relevant. You’re not allowed to use a ‘balloon, model’ or ‘other thing’ that flies anywhere on the railway premises. If you’re gift-laden and rushing to get to your friend’s birthday dinner, it’s better to cab it. Otherwise the one (balloon) that got away might just return to haunt you. 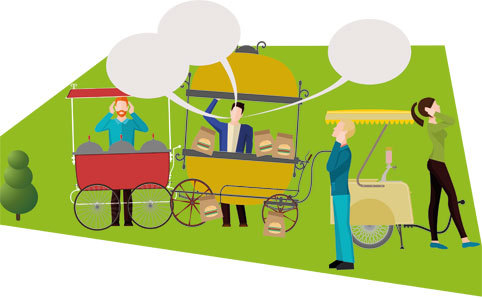 Being loud while selling
(Cap 228, s6)
You may have become accustomed to it in the Ladies’ Market but it’s technically illegal to ‘utter cries for the purpose of buying or selling any article whatsoever’. That’s right. ‘Whatsoever’. They’re not mincing words here. However, we’re not so sure that the fine of $50 would put traders off selling fake Converse. The markup is likely worth it. Don’t feel obligated to remind these wheeler-dealer veterans of their misdemeanours next time you hunt for a cheap handbag though. We’re not sure how well they’ll take it... 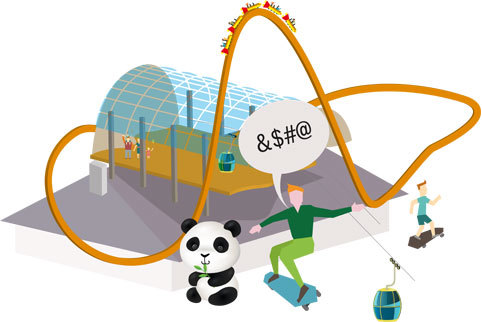 Swearing at a panda in Ocean Park
(Cap 388B, s5 (5a))
You’ve got to hand it to Ocean Park for thriving post-Disneyland but, hot dang, is there quite the list of things you can’t do in the loveable theme park. Their bylaws form a document 16 pages long! Among this lengthy legislation, it says that you must not ‘use obscene language, shout’ or ‘cause a nuisance’ to any visitor or animal in the park. Perhaps pandas respond badly to choice words. 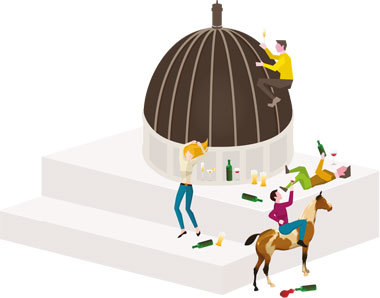 Being drunk... in a bar. Or on a horse
(Cap 228, s28)
It turns out that our former English overlords really didn’t approve of drinking to excess and they made sure to cut the problem at its roots. ‘Any person who is found drunk in any public place or on any [licensed] premises’ can get a whopping fine... of $50. That’s only half a pint in LKF! It gets better, though, because inebriated horse-riders get the rap too. And their fine stands at $250. Your stallion may stand out from the Ferraris on Wyndham Street but drunk-riding is sure to end your night out on a whiny note.

Letting loose your Appaloosa
(Cap 228, s4 (9))
Don’t horses get the short end of the stick in our city? Colonial nostalgia at its finest, this law demands that the modern day horseman respect public spaces by keeping his steed from ‘wandering upon any public place’ or ‘standing across any footpath’. With equine stage show Cavalia in town at the moment, there’s an outside chance this law’s relevance could make a comeback, though. 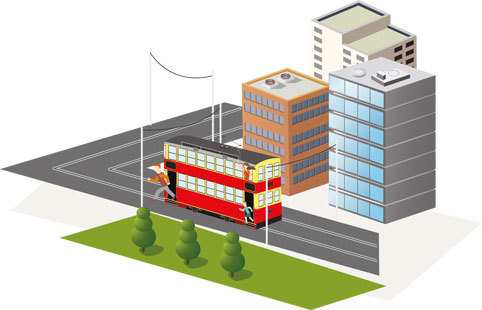 One direction, tram edition
(Cap 107A, Rule 5)
This is possibly the most decadent use of ink ever – the rule telling you not to exit the tram ‘from that side which is on the right hand of the motorman’. Yes, the side where there are no doors. We enjoy this law for the daredevil possibility that someone might try jumping out of the tiny windows for kicks but what we find funnier is the passive aggression in colonial legislation – as though people might one day forget that here in Hong Kong we keep to the left-hand side of the road. 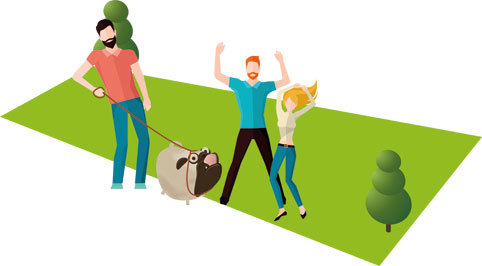 Letting your dog annoy people
(Cap 228, s4(11))
Perhaps the ultimate proof of small, yappy furballs being inferior to their larger and calmer cousins – it’s an offence to let your dog ‘annoy neighbours or passersby by barking or otherwise’, making your chihuahua’s daily stroll a legal nightmare. Yes, that little pup you spend your paycheques grooming could just rack up even more bills – a $500 fine – or three months in prison. If you’re the proud owner of an impenetrably zen dog, congratulations. If not, it’s time for a muzzle... 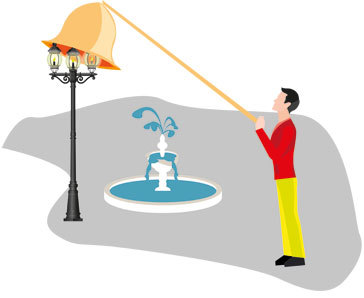 Putting out a lamp
(Cap 228, s4(22))
This gem – banning anyone from ‘pulling or ringing any door bell’ or ‘extinguishing the light of any lamp’ – harkens back to the days when the streetlights were more likely to be oil lamps than electric ones. We detect the spirit of a thousand grumpy old men fed up with the neighbourhood kids playing knock-door-run for shits and giggles. We imagine that youngsters nowadays are probably too occupied with their phones for this to be
a thing any more. 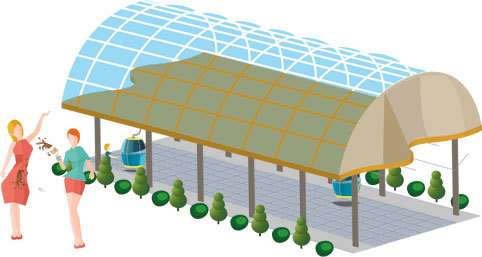 Getting a latte on someone’s dress in the Ngong Ping Cable Car
(Cap 577A, s39)
It’s clear from this little provision that aspirations like looking hot are not lost among Hong Kong’s draftsmen. Those of you sharing a comfy cable car with strangers – especially glamorous strangers – be warned. It’s an offence to ‘soil the dress, clothing or personal effects’ of anyone in the carriage. So if you’re sharing a cabin you’ll want to be extra careful (although it’s more the civil suit you want to watch out for). 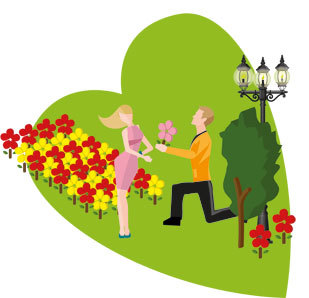 Picking a flower
(Cap 96, s21)
You might think nothing of plucking a pretty petal for a loved one during a weekend hike but the writer of the Forests and Countryside Ordinance does. The no plucking rule applies to any ‘bud, blossom or leaf’ across all forests on government land. The law doesn’t stop there either – the next section warns you about letting your cattle and goats trespass on government land. Bear that in mind next time you take your cow for a stroll. 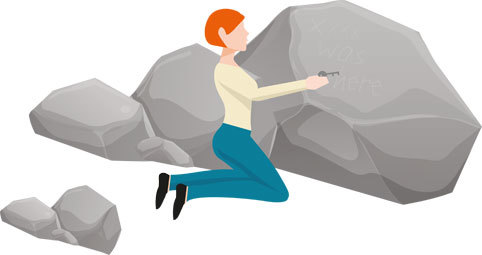 Carving on rocks
(Cap 228, s4(19))
This law stops all that ‘Dave was here’ nonsense. In fact, it stamps out the drawing of anything from symbols to slogans on surfaces, from rocks to roads. Although, to be honest, we’re not sure that protest through granite graffiti is the best method, anyway. We know boundary stones occasionally look like they could benefit from a charming doodle here or there – but try not to get too artsy. 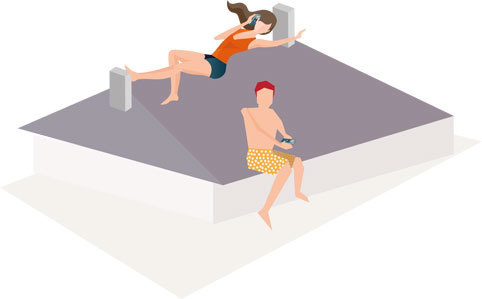 Sending filthy messages
(Cap 228, s20)
It may be the age of sexting and inappropriate Snapchats but you and your significant other should know that sending an ‘indecent’ or ‘obscene’ message over ‘wireless telephony’ (or telegraph, in fact) is illegal. It’s all fun and games until someone gets slapped with a thoroughly unsexy $1,000 fine. Since 2013, harassment is finally starting to have serious legal consequences in our city – so remember, unsolicited dick pics definitely aren’t cool.

Lawful controversy
Some of the less amusing laws that have divided society in recent years...

Unlawful assembly
(s.18, Cap.245)
This controversial segment of the ever-unpopular Public Order Ordinance (warning: do not abbreviate) states that ‘three or more persons, assembled together’ behaving in a disorderly manner is unlawful. The debate over the application of this law has intensified following fears of stricter police enforcement post-Occupy Central and recent protests against parallel traders. Prosecutions for such gatherings are rare but sensitive, and often coloured with suspicions of political suppression.

Transgender identities
While celebrated on some accounts, the infamous Ms W court case in 2013 attracted great criticism. The landmark ruling allowed transgender people to marry but only once they have had the full set of sex reassignment surgeries – some of which are particularly risky. A lot rides on the government’s initiative to churn out a change in this law, but the sluggish pace has been a cause for concern for many.

Domestic workers
There has been a decades-long saga surrounding the controversy over the ‘live-in rule’, which means helpers must live in their employer’s house, and the ‘two-week rule’, stating that helpers must leave Hong Kong within two weeks of a contract ending. That’s not to mention the high-profile Vallejos litigation in 2013, denying two helpers the right to permanent residency. One thing is certain – it’s a tough world in Hong Kong for foreign domestic workers.

No dependent visas for gay spouses
Hong Kong law doesn’t recognise gay marriage certificates from overseas, making life difficult for young gay couples looking to move here together. Is it smart to discourage the next Tim Cook (and his partner) from hanging out in Hong Kong? Many doubt it. Activists are hungry for change, but from their perspective, the government is simply staying foolish.