Is Lan Kwai Fong, much like some of its late night revellers, on its last legs? Amanda Sheppard investigates the rise of ‘Club 7-Eleven’ and the efforts of the nighttime haunts that want to halt the phenomenon in its tracks

Walk through Lan Kwai Fong late on a Saturday evening and you’ll be hard pressed to find a bar where people aren’t spilling out on to the streets. But the most popular place of all is the nightspot affectionately known by its patrons as ‘Club 7-Eleven’.

With beer in hand, young reveller Stephanie and a group of her friends stand outside the 7-Eleven atop D’Aguilar Street, right in the heart of Hong Kong’s LKF nightlife area. They have been in several bars this evening and, after a quick pit stop, will move on to dance the night away in a club. “You’d need thousands [of dollars] on a night out if you weren’t stopping off at a 7-Eleven!” says Stephanie. “It’s ridiculous.” This sentiment is hardly uncommon. With a fraction of their neighbours’ overheads, 7-Eleven is selling drinks at far lower prices and attracting crowds in their masses. This is a hard place for patrons to hate. But is the partygoer’s mainstay killing Hong Kong’s bar scene?

It just isn’t possible for the bars in both Lan Kwai Fong and Wan Chai to compete with 7-Eleven on basic costs – overheads are lower and turnover is faster. But this situation is made worse for bar owners by the fact that 7-Eleven is exempt from the need to obtain a liquor licence and as such is not bound by the same regulations as nearby establishments. In other words, it can sell booze to pretty much anybody – even, technically, under the law, to those under 18, although 7-Eleven policy is to strictly serve adults only. The Lan Kwai Fong Association has recently rallied to oppose the presence of the convenience store in the district – and get rid of the problems it’s posing them.

“It’s absolutely crazy. Every other developed society has a responsibility attached to the sale of alcohol,” says Cathal Kiely, owner of the popular Rúla Búla club in LKF. Kiely is referring to the legal loopholes that allow 7-Eleven the right to sell alcohol without a licence. Is the lack of regulation surrounding the sale of alcohol merely a hindrance to local businesses or also a wider concern for public safety?

The Lan Kwai Fong Association, of which Rúla Búla is a member, has more than 100 businesses in the area and has expressed growing concern of the rise of ‘Club 7-Eleven’. Vanessa Wong is the association’s marketing officer. “[The situation with 7-Eleven] actually poses problems for the safety of the area,” she says. “The most obvious one is crowd control as people gather outside the store and block the road.” The Rugby Sevens is expected to amass crowds of 120,000 people over the course of a single weekend. Safely assuming a fair few end up in Lan Kwai Fong, it’s suggested that this could pose a genuine concern to public welfare.

The association is collecting opinions from member establishments before taking its concerns to the Liquor Licensing Board in an attempt to ensure 7-Eleven requires a licence to sell alcohol. Without the need to obtain such a licence, convenience stores need not comply with regulations that the association considers fundamental to public safety. Wong explains that 7-Eleven ‘lacks the safety requirements which other outlets have to fulfil – a limit on the number of customers on the premises, having toilets, the presence of an escape route… to name but a few’. 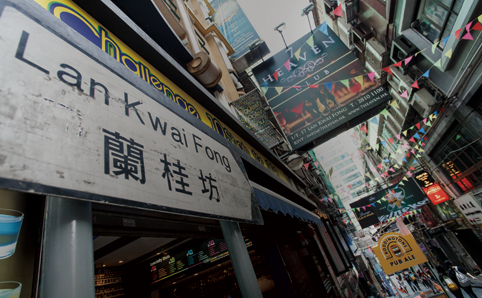 Out on the town: LKF is the hub of Hong Kong’s nightlife

The growing movement to act against the popular convenience store comes with the long-awaited opening of California Tower. The swanky new building houses a whole host of new entertainment venues, all within a one-minute radius of two separate 7-Eleven stores. With the existing LKF bars still generally packed on weekends, you’d be forgiven for thinking they’re unaffected. However, while partygoers continue to flock in their thousands to popular haunts, bar owners claim they’re just not spending like they used to. Wong remarks that businesses have reported reduced sales over recent years. “There’s an estimated five to 10 percent drop in beer sales in the area near the newly opened 7-Eleven on D’Aguilar Street,” she tells us. As a result of these reduced sales, bars must search for other avenues of income. This is likely to take the form of introducing or raising existing cover charges or drinks prices – in some cases, from high to really high. Kiely warns that it could have more serious consequences, however, leading to some places eventually being forced to shut up shop altogether.

The crux of the problem lies in the way in which the existing law (25A of the Dutiable Commodities (Liquor) Regulations) ties the sale of liquor to location, as opposed to the individual consuming the drink. The Liquor Licensing Board falls under the jurisdiction of the Food and Environmental Hygiene Department. We approach the FEHD but a spokesperson simply responds: “This is the law. I cannot comment.” The spokesperson declines to comment further on the matter. A spokesperson at 7-Eleven tells us that: “7-Eleven operates its stores in the Lan Kwai Fong area in full compliance with the law.”

If 7-Eleven isn’t selling alcohol for consumption on the premises, then it’s not breaking the law. So, should it really be held to the same responsibilities as a licenced bar? Not according to 7-Eleven’s spokesperson, who states: “7-Eleven and the bars in Lan Kwai Fong are in two completely different lines of business.” There are risks in the apparent loopholes – the prevailing one being the sale of alcohol to minors. Regulation 28 of the same charter reads ‘no licencee shall permit any person under the age of 18 years to drink any intoxicating liquor on any licenced premises’. As an establishment that doesn’t permit drinking on the premises, 7-Eleven is under no legal obligation to deny the sale of alcohol to minors, although it does run a policy of serving over-18s only. A government survey conducted in 2011/12 identified that 59 percent of secondary school students had tried alcohol. Both Wong and Kiely have noted a marked increase in underage drinking in recent years. “It’s a problem everywhere,” says Kiely. “We shouldn’t have places around that are making it easier.”

Kiely is adamant that it’s not the mere presence of 7-Eleven in the district that’s problematic. “They should have the right to open anywhere,” he says. “That’s the great thing about living in a free economy.” What he does take issue with, however, is what he sees as an unfair advantage for the chain. “I find it absolutely insane that they aren’t held to the same standards as everyone else.” Whether the LKF Association pursues the matter further is up to the bars and clubs in the district who may have a gripe with this so-called ‘unfair advantage’. And whether it eventually puts pressure on either 7-Eleven to move out of LKF or eventually leads to the government reviewing its laws on the sale of alcohol remains to be seen. That may all be down to the LKF revellers and whether they really do succeed in moving a decent amount of takings from the area’s conventional clubs to the coffers of ‘Club 7-Eleven’.

Word on the street

“It’s great for people like me but I have to admit there are more kids drinking here than before”
- Steven, 27

“It’s really enhanced the party scene – it makes the whole street feel like a party rather than just a single club”
- Sarah, 22

“If anything, it’s encouraging a community vibe; anyone who can afford anything can be included in the party atmosphere”
- Lauren, 24

“I know it’s bad for businesses but the clubs can be so unaffordable!”
- Nick, 27

Find out more about liquor licensing at fehd.gov.hk.