Behind the Scenes: Chan Hoi-yan

A series looking at the less heralded members of the Hong Kong film industry. This time, gaffer Chan Hoi-yan

We’ve all heard of Jackie Chan, Wong Kar-wai and the like. But there’s more to the Hong Kong film industry than just the few big names in bright lights. More than 16,000 people work in our city’s motion picture and entertainment services and the small folk are just as essential for the creation of a great film as the star actor or big name director.

In this series we take a look at the less heralded individuals working in Hong Kong’s greatest creative arena. This time, we speak to Chan Hoi-yan, a veteran of nearly 40 years in the local film industry. A man who’s worked on hit films like Paradox – up for nine awards at this year’s Hong Kong Film Awards – and with legends like Sammo Hung, we hear his insights on what it’s like to perform one of the most physically demanding roles on set. Additional reporting by Priscilla Lee

Many people probably don’t know what a gaffer does, so can you explain what a typical day’s work involves?
My crew takes full responsibility for anything that deals with light, from lighting positions to where the cables are to looking after the backup electricity generator. Whether the filming is done indoors, outdoors during the day or outdoors at night, these situations all require different lighting positions and intensities. I have to make sure the lighting brings out the atmosphere that’s required for the scene. For instance, assuming the scene is filmed during the day, the first thing we’d do when we reach the set is to observe where the sun is positioned, how cloudy it is, what the scene is about and if it involves an actor or actress – men and women require different lighting to look their best.

How did you end up in this particular role?
I joined the film industry over 30 years ago with zero knowledge about lighting. My older brother was a driver for film crews back in those days. There weren’t many gaffers and electricians about in 1979. One day, I was just told to help them out and learn on the job. At that time, I called it quits after two days! The seniors were fierce and kept scolding me. Since I already held a full-time job at a restaurant, I didn’t see the point of staying on. After a short while, I was asked again to help out since the crew were really short-handed. Things went better then. I would say because I was witty and have a flare for the job, that’s why I was quickly promoted and I’ve stayed in the same line until today.

So what enticed you to give this work another shot?
What drew me in is that I don’t need to repeat the same work every day. I get to go out and experience new things, go to different locations and engage in different creative endeavours. No two days are the same. Every aspect of the light varies daily, according to the weather and set requirements. Sitting in an office and going about the same repetitive routine is boring for me. I feel happiest when I get to do different things and meet different people. Maybe it’s because I was very hyper as a child but being able to face different challenges each day and having to come up with different solutions is what I enjoy.

On the flip side, is there anything bad about the job?
In the movie industry, especially for the camera and lighting crew, we don’t have a package, nor do we have stable monthly income or benefits and bonuses. We’re basically freelancers; we operate on a movie by movie basis. If you’re lucky and get a big production, that might mean work for three months. But you never know when your next job will come. Fortunately, things have gotten better the last few years as more Mainland film companies have come to Hong Kong to invest. Back during the gloomiest period of the Hong Kong film industry, there was a time where I received no job offers for nine months. I had to turn to commercials to make ends meet. It’s much better now, though. I haven’t had many chances to take a break from work the last few years; the offers come knocking one after another.

Is the job a physically demanding one?
Definitely. Being a gaffer is really, really tough; tougher than you can imagine. Being in the lighting crew is one of the most physically demanding roles on set. The equipment is heavy and we need to carry them around and set them on tripods, usually at quite a height. Sometimes, a light can be so heavy it requires four or five strong men to lift it. Not to mention, when you’re lugging equipment about, weather conditions can be quite torturous. If you have to rank the most arduous and back-breaking jobs on set, it would be the lighting and props crews.

What’s an aspect of your work that the public probably doesn’t know about?
We have quite a bit of work to do in making the actors look good. More often than not, when audiences see an actress has a great complexion and looks fabulous on screen, it’s because the lighting crew put in tremendous effort to make them look good. We use huge, soft lights with high voltages and many filters and diffusers to achieve the effect. Some famous actresses will do a scene, look at the playback straightaway and request for the scene to be redone if they don’t look good enough. Especially when it’s an outdoor scene, the same scene might be shot over the course of a few days and the intensity of the sun can vary. We have to make sure we position the lights in such a way that the sunlight is blocked and artificial light is used since the sun’s light is too harsh and softer lighting is required to make someone look good on camera. DOPs [Directors of Photography] don’t care about this and it’s the gaffers that have to find a balance between the two.

Do you guys feel underappreciated?
That’s for sure! But I understood this fact from day one when I entered the industry. However, each time filming is wrapped up, the actors come to us and express their gratitude for making them look good on screen. This makes us proud and happy and it’s probably the only appreciation we get.

Having been in the industry for so many years, what changes have you witnessed?
Back in the days when everything was shot on film, you’d couldn’t watch an immediate playback on the monitor. Things depended hugely on the cameraman. If he says the shot is okay, then everyone would trust him, including the director. It would take three days to develop the film, before the director could go through it. If anything came out wrong, the director would rage. And in the 1980s and 90s, when computers effects weren’t very advanced, the lighting crew had to hide wires used in stunts simply by dimming the lights. We used lighting to hide the cables of certain fighting scenes!

Want more behind the scenes interviews? 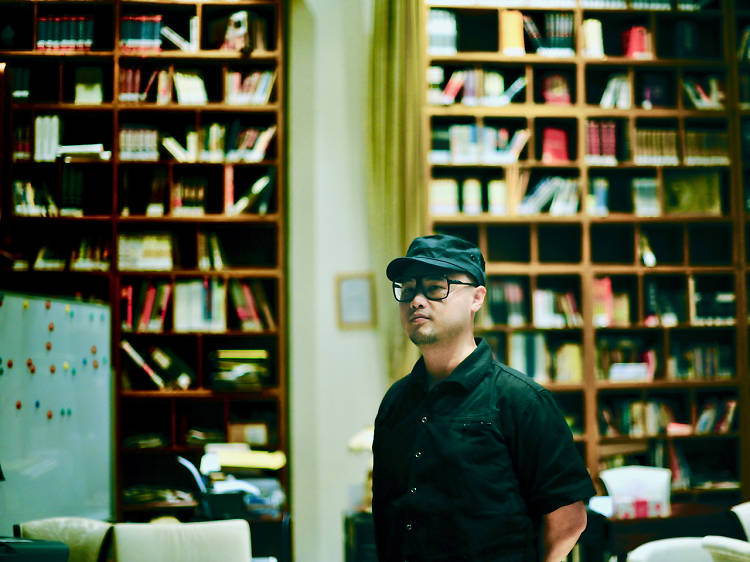 Behind the Scenes: Allen Leung

Shining a spotlight on the less heralded members of the Hong Kong film industry, we speak with Allen Leung, a film editor for Johnnie To’s internationally renowned Milkyway Image production company, who won the Hong Kong Film Award for Best Film Editing for his work on Trivisa.