The world-beating pop queen talks Tinder, big balloons and costume chafing ahead of her double date in Macau 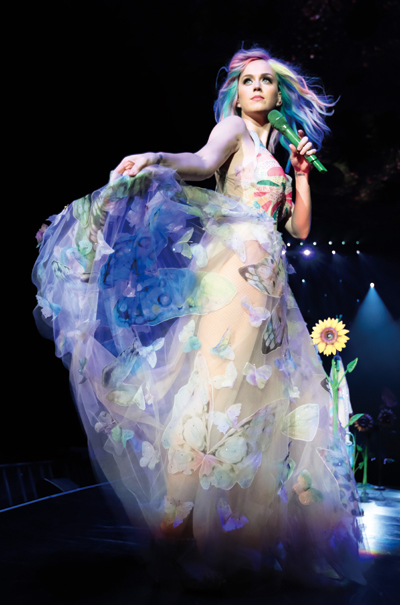 Katy Perry – arguably the biggest popstar in the world right now – offers us her elbow as a greeting. This isn’t some sort of faddish new trend from LA but rather a way of protecting us from the severe cold that means our conversation is littered with tissues, sinus spray and, at one point, the image of Perry with a neon green bogey dangling from her nose. Pop don’t stop, however, and the steely determination that’s seen the California gurl transform from unsigned acoustic troubadour to chart queen is never far from the snotty surface.

In a pop landscape dominated by goddess-like perfectionists (Beyoncé), tabloid-baiters (Miley Cyrus) and tribe leaders (Lady Gaga), Katy Perry comes across as relatable, self-aware and magnetic. Head down to her Prismatic show, which lands in Macau on May 1 and 2, and you’ll see her mix bangers (‘I play every song that’s ever gone number one or close to it’) with excess (light-up outfits, indoor fireworks, ancient Egypt) and huge dollops of camp and kitsch.

Sure, her songs might be packed full of innuendo (‘it’s time to bring out the big balloons!’ she sings oh-so-sweetly on Birthday) but it would be a mistake to dismiss the megastar singer as silly or throwaway. She’s not the world’s most-followed person on Twitter for nothing. “The definition of me is to be continued,” she says, stuffing sinus spray up her left nostril. “Give it five more years and you’ll see the plan that I have in my head. It’s not all by chance, you know.”

But she’s on a whole other planet, almost. You’re more of an empathetic popstar...
I hope so. I work really hard. I work myself into this state. But Beyoncé’s an icon and bionic, almost. I bet she doesn’t get sick ever!

Obviously, pop isn’t a competition. But at the same time it sort of is, isn’t it?
Anything is a competition. I mean, if you write a good story you want it to be better than other journalists’. I can’t do a lot of things those other girls can do and they can’t do a lot of things I can do. We  all have special idiosyncrasies about us that mean we can all exist at the same time.

What are your main popstar strengths?
My relatability, I think. That and my openness to vulnerability. And just the general good-time fun. And, possibly – not to keep going on – the kind of inspirational zest you can get from the songs.

Do people lump all popstars in together?
Well, yeah, because nobody really fucking cares. Everyone’s busy with their own lives, you know what I mean? We’re entertainers, we’re not like patriarchs... Matriarchs? Is that the right word? No. Popes? Am I saying anything right?

Pop’s entertainment, basically. You’re not here to be people’s guide through life...
Exactly. Time Out is your guide for life.

Amazing. Are you quite a spiritual person?
I’ve got my rose quartz [opens hand to reveal a heart-shaped pink crystal]. You keep this one on your heart because it’s for healing and attracting love – all kinds of love. Just good energy.

What kind of energy do the Prismatic shows have?
Well, I kick off the set with [number one single] Roar, so don’t be late. The last one was challenging but this is probably 10 times more challenging in terms of movement, sound design and overall presentation. The stage wraps around the whole arena. Basically I had this idea when I went to see the Rolling Stones show because they had this lip that went all the way around so I’ve got a triangular version because I’m all hopped up on this prism shit.

And because you’re part of the Illuminati?
I wish I was! I don’t know what it is or if there is a club, but I want in. I’m trying to go into that secret bunker at the end of the world. Doesn’t it mean I’ve sold my soul to Satan? We have a whole Egyptian section in the show, so I’m sure we’ll get a lot of those sorts of commentaries.

The tour outfits look tight. Do any of them chafe?
No chafing as yet. I wish I could take a bunch of people into my quick change because it’s insane in there. It’s like Formula 1! And if you don’t change it right, well, you don’t recover from that. You have to hobble along.

Is there a moment when you’re flying above the crowd when you say to yourself ‘I’m just a normal girl from California: this is madness’?
Yes! Every day when I take off my make-up I’m totally normcore. I’m so normal. I’m trying to do something abnormal and extraordinary and it’s obviously killing me but I’m going to push myself.

You mention ‘big balloons’ in Birthday. Are there any in the show?
There are lots of big balloons [spits a massive globule of phlegm into a tissue]. My mind sometimes thinks in euphemisms and innuendos and I don’t know why. Secretly I’m a dirty birdy.

When was the last time you were so drunk you threw up?
I mean, I don’t like getting drunk. I don’t have time for it any more. I love having a celebratory glass of champagne but, yeah, I can’t get wasted any more now that I have this huge responsibility.

Okay, so how do you relax when you’re in tour mode?
I watch a lot of documentaries and I catch up on all the things I wasn’t allowed to watch growing up. I have a whole list of movies I need to revamp on, likeDeath Becomes Her. A lot of Goldie Hawn movies actually.

Overboard?
I love that movie! I also like to go out in the cities I visit. You have so much more legitimacy when you’re on the stage than if you go out and say ‘hi, wherever’ but you’ve never seen anything more than the spaghetti bolognese at the hotel. You seem kind of fraudulent.

Is it true you’re on Tinder?
No. I’m not on Tinder. One of my good girlfriends is on Tinder and sometimes after we’re done gabbing about everything we’ll just scroll through it. I’ve only gone on it with one of my girlfriends who uses it to just sideswipe people.