Interview: Brett Anderson and Mat Osman of Suede on Night Thoughts and Britpop

"Suede is almost its own thing. We're just there to feed it and follow it"

Hong Kong’s adoration for Suede has never wilted. The boys who arguably started the Britpop movement of the 1990s have played our city five times and are preparing to grace our shores again on August 16. From dedicated Hong Kong fanclubs to generations of music lovers who still sport Suede T-shirts around town, this is a gig that’s sure to be as much about nostalgia as it is about the band’s new sound.

The British quintet, who last played here in 2013, formed all the way back in 1989, four years before their seminal 1993 single Animal Nitrate, a genre-defining release. Though the outfit disbanded in 2003 when their album A New Morning failed to inspire, they reunited in 2010 and have since released two records. And through it all, Hong Kong has been in love with the guys. We sit down with lead singer Brett Anderson and bassist Mat Osman ahead of their HK return to promote Night Thoughts, released earlier this year. Welcome to Suede’s before-and-after story.

So, the album you’re here to promote. How did Night Thoughts come about?
Mat: We decided really early on that we wanted to make a record that really flows, with tracks running into each other. It’s a musical idea more than a concept. And we started by going to Belgium, where we just recorded this 45-minute kind of mix of pieces, without really thinking up any songs. It’s a very different way of working for us. And, you know, Brett had just become a father six months before and he said right from the start that he wanted to write about family, growing up and death. He wanted to try to find a way of writing this in the Suede way and not in a clichéd way.

Where does the title come from?
Mat: It was just about the idea of that feeling you have when it’s three or four in the morning and you can’t sleep and the world is an oppressive and terrifying place. It’s almost like being a child again! It’s a title that symbolised the feeling of paranoia and the abyss that kind of runs through a lot of the songs. 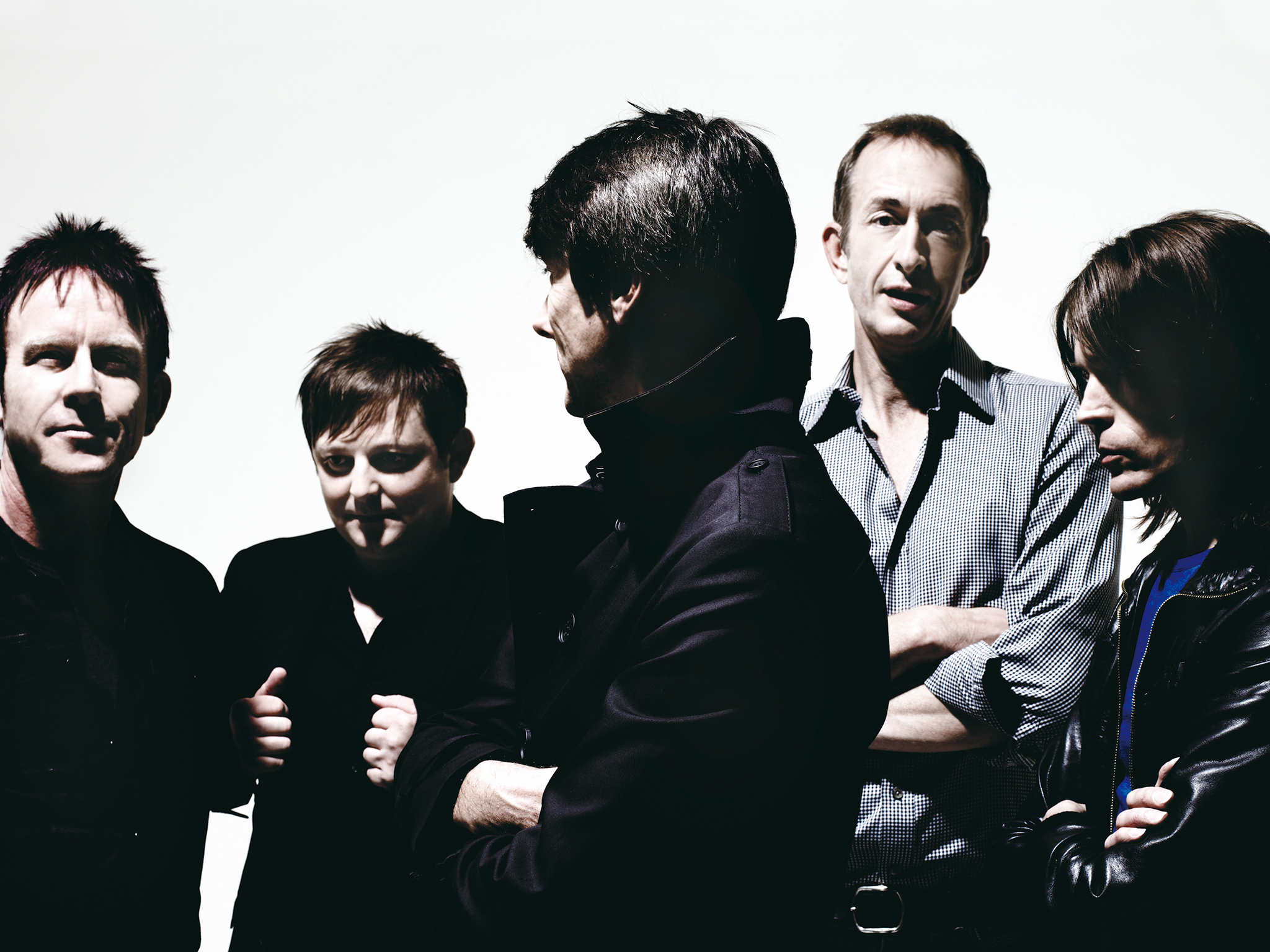 This is your second album after the reunion. Has it been different since you got back together?
Mat: I think it’s been very different. I’ve never done anything else, so by the fourth or fifth album [during Suede’s first run], I was bored of it. It’s ridiculous, because it’s one of the least boring lives you could possibly have but almost anything can become ordinary if you do it long enough. But when we came back, I think we realised how precious it is and how fragile it is, making music. That we had an opportunity that so few people have, it really drives you. It gives you the hunger to make something that’s worthwhile and will last through the ages. I feel like we needed some time away to realise that.

Was that fragility something you realised during the hiatus or after the reunion?
I think, a little of both. There’s nothing like being out in the real world to realise how lucky you were to have the freedom of doing something you love. But, also, there were a couple of moments when we got back on stage that we suddenly realised that there’s chemistry to the band. Suede is not just the five of us. It’s some kind of chemical reaction that happens between us. Suede is almost its own thing. We’re just there to feed it and follow it.

Hong Kong. We love you here…
Mat: I remember the first time I came to Hong Kong! I remember it being this incredibly foreign place. It was our first performance in Asia besides Japan. We were told it will all be expats and white faces. So just stepping out on the stage and seeing this wall of faces from a completely different culture who understood the band and understood the music was a great feeling. There was a proper roar from the audience, a young and obviously local crowd. It was one of my absolute favourite moments.

Brett: And what we love about performing in Hong Kong, quite simply, is the audience. The sort of band we are, it's very important the audience engages with what we do. We need that raucous excitement and flow of energy between the band and the audience. We've always found that here. There's a sort of hysteria about it.

What are your impressions of Hong Kong?
Brett: I like the Star Ferry. I love the harbour and the drama of the skyline. It's a city where modernity is a beautiful thing rather than the grey, drab effect it has in some cities.

What can we expect at tonight's show?
Mat: We've not decided yet but we'll probably do three or four tracks from the new album and some of the older stuff from Coming Up, Dog Man Star and so on.

In many ways, Suede is still tied to the Britpop days. How does that make you feel?
Mat: I’m proud of the fact that we’re tied up in a lot of people’s lives. I’ve met people who’ve married to our songs, had their first kiss to our songs and so on. Being the soundtrack of people’s lives and being tangled up in the lives of people you don’t know, that’s amazing! That I love.