Restaurants Central
3 out of 5 stars 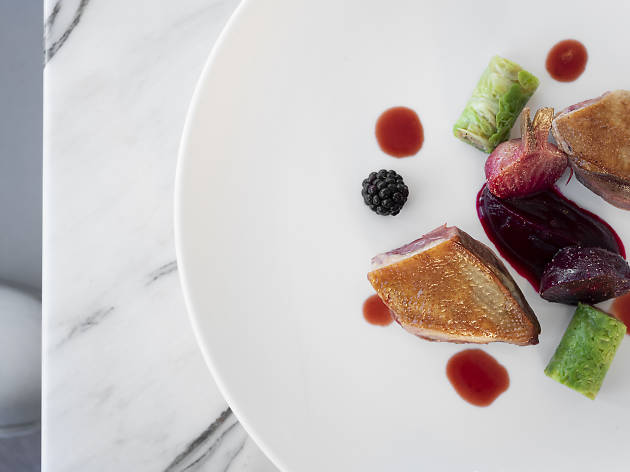 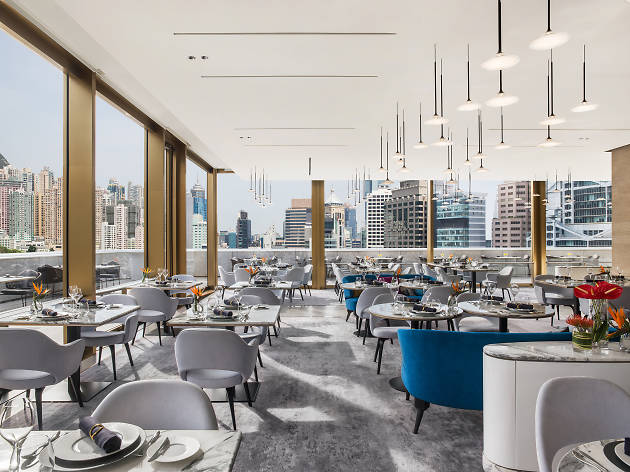 When it comes to rooftop spaces in this city, the widely accepted rule is if you've got it, flaunt it. That’s what The Murray hotel does with Popinjays, the crowning gem of its F&B portfolio. Accessible by a private elevator, the penthouse venue has a bar on one side and the restaurant on the other. It's encased in floor-to-ceiling windows with a wraparound terrace that looks out in all directions to surrounding high-rises. While the acoustics could use some improvement – right now, it's difficult to hear the staff, even if they’re standing tableside – the space is a stunner, a cool blend of class and playfulness, with plenty of Kaws artwork to embellish the walls.

This showiness is apt for a restaurant that derives its name from the old-fashioned term for a parrot. Expect plenty of fowl language here, beginning with the 'aviary' cocktail selection where the Pecking Order ($130) roosts. Made with tom yum-infused Nusa Caña rum with yuzu, elderflower, lime and mint soda, it's extremely drinkable with its candy-like sourness and just a slight touch of heat.

In terms of food, there's the Birds of a Feather sharing menu ($990 per person) served on Fridays and Saturdays, as well as a four or six-course degustation option ($980-$1,280) on Tuesdays to Thursdays. Deciding to fly in a different direction, we order à la carte, starting with the Hokkaido scallop and sea urchin carpaccio ($260). It's a disappointing opener, the mollusc being thick and creamy but lacking any sweetness. Mains fare much better. The seared John Dory ($420) is well-seasoned with flesh that's firm yet wonderfully flaky. Simple and light, especially with the accompanying quinoa risotto and aioli, it's the yin to the signature roasted Vendée pigeon's yang ($650), a dish designed to please those who prefer flavours deep and robust. Tender, gamey and a beautiful medium-rare pink, the meat pairs especially well with acute flavours, amply provided here by the black berries and Kalamata olives that share its elegant white plate.

As impressed as we are with the pigeon, though, it's with a dessert that Popinjays really takes flight. The caramelised golden apple cheesecake ($130) is a delight of layered textures and flavours. The cheese component – rich, creamy and just the right amount of tartness – is generously piped over a cookie base before it's adorned with shards of dehydrated apple. It's paired with a quenelle of fragrant, pod-speckled vanilla ice cream and strips of fresh green apple that bring out the sweetness. We prefer this to white peach crémeaux ($130). Comprising white peach purée in white peach mousse and a thin, pink layer of peach juice gelatin – all made to look like, you guessed it, a white peach – this latter sweet is one-note in flavour, although it's also a joy to look at.

This aesthetics-first approach is what defines Popinjays. While certain things could be improved, the restaurant isn't shy about all the things it does right, mainly the tasteful venue itself and stunning rooftop terrace. Its name may mean parrot, but Popinjays is a venue that struts proudly like a peacock.