The best taprooms in London

From secretive Bermondsey Beer Mile haunts to bustling Tottenham mega-breweries, these are all the best craft beer taprooms to try in the capital

It won't come as any great surprise to you that Londoners like beer. You can't walk past a railway arch without spotting the tell-tale shiny tanks of a microbrewery, and self-respecting craft beer pubs in the capital no longer gives prime tap space to brewers from beyond Zone 6. As such, it makes perfect sense to enjoy your pint mere yards away from where it was made in one of London’s best craft beer taprooms.

Here's our list of the most exciting spots to drink on draught, including craft beer behemoths like Beavertown, shabby chic spaces attached to burgeoning London breweries and even taprooms that have been opened by brewers from outside of the capital – like much-loved Cloudwater – who just couldn’t keep themselves away from such a buzzing beer scene.

The best taprooms in London 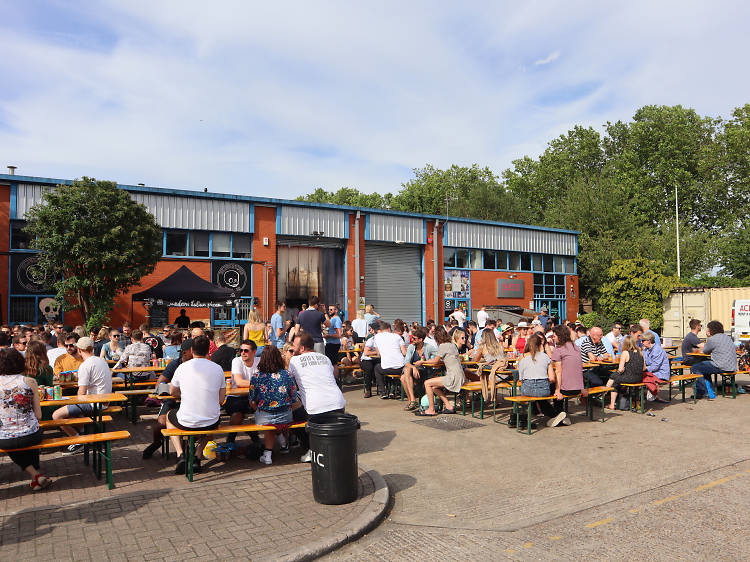 One of London’s real OG breweries, Beavertown’s taproom is just as impressive as you’d expect. It’s the place to go for alfresco beers in Tottenham, whether you’re drinking from the tap or from one of its famous illustrated cans. Alternatively, if you’re a football fan, head to its location at the nearby Spurs stadium for a tipple at the UK’s only onsite footie ground microbrewery. 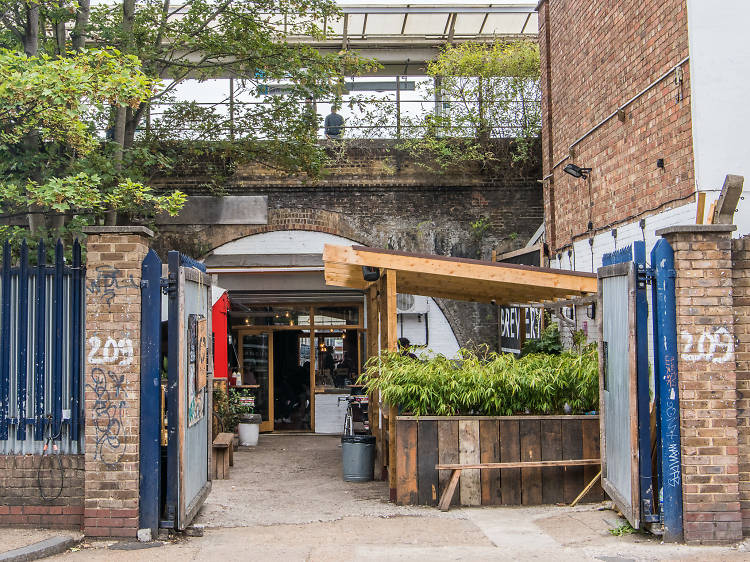 Peckham stalwarts Brick run a taproom as no-nonsense as its flagship line of beers. So, if you’re wanting to neck a Peckham Pale, a Peckham IPA, a Peckham Pils or even a ruby red Peckham Rye, this is the place to be. Bonus points for the pop-up art exhibitions which often grace the walls. 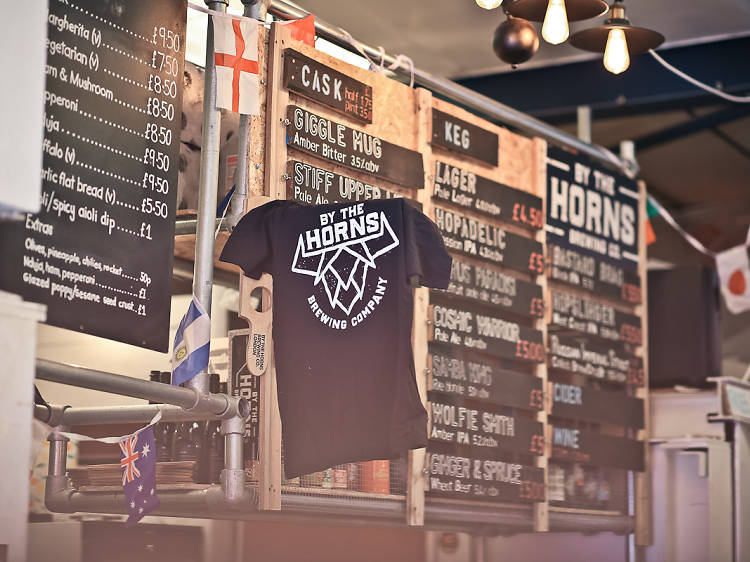 By The Horns Brewing Co

One of the capital’s smaller breweries (and taprooms), By The Horns has a raft of its own benefits. Firstly, it’s great to look at, with its unique barrel-roofed, picket-fenced charm. Secondly, it’s sport-fan-friendly, with seven screens showing all the latest games. Thirdly, they have a pizza residency courtesy of The Dough Shack. And finally (and most importantly), this Tooting taproom is absolutely nowhere near Bermondsey. 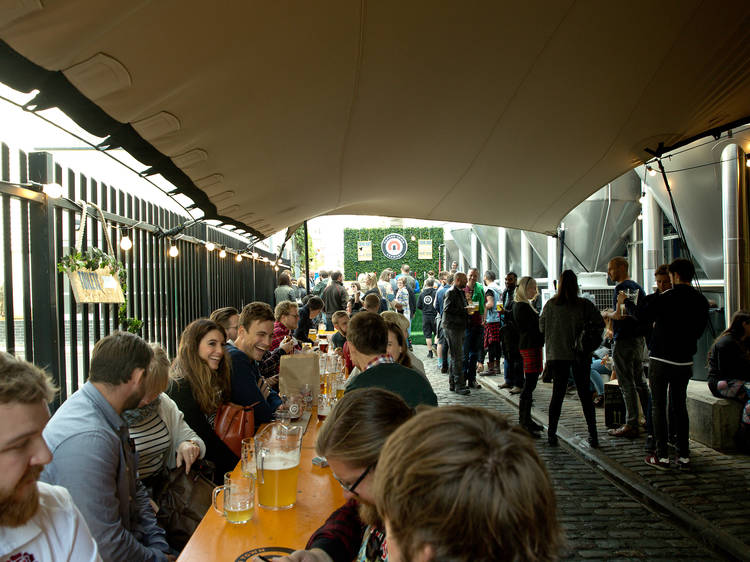 You can’t talk about London beers without mentioning Camden, and the bright-red emblazoned home of Hells, Show Off and Gentleman’s Wit is suitably massive. There are brewery tours, street food appearances and, of course, all of your faves on tap – even if a good portion of the company’s actual beer brewing has now decamped to Enfield. 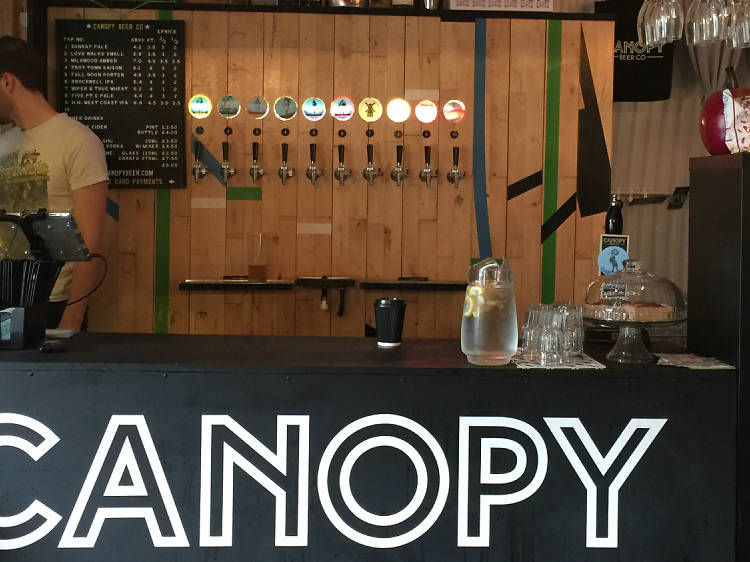 Hidden in a Herne Hill factory estate just off Brockwell Park, Canopy is under no illusions that its taproom is a little hard to find (‘Take on the scrap-yard obstacle challenge to get to us’, says its website). You’ll be rewarded at the journey’s end with a modest but welcoming bar, with brightly-coloured bunting to match the tropical cans and vibrant beers on tap. 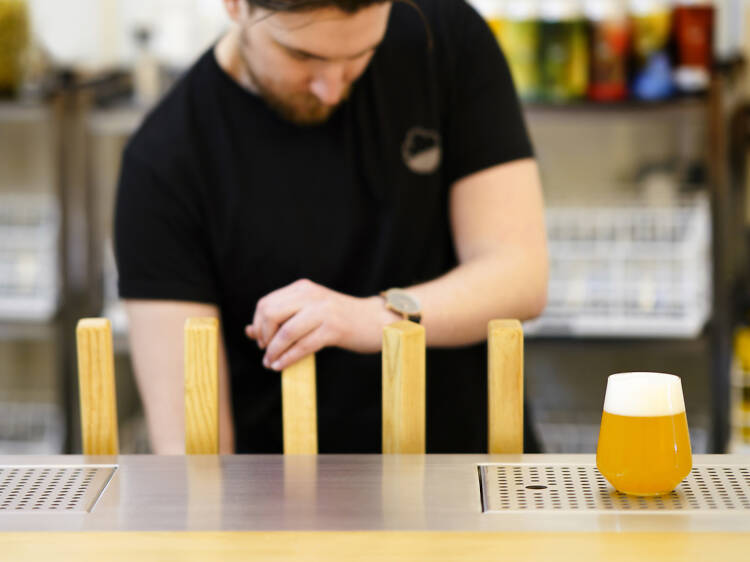 One of the capital’s newer breweries – having migrated down from Manchester – Cloudwater has made a massive impact on the London beer scene with its seasonal-first approach. There are 20 ever-changing taps at its arty, spacious Enid Street railway arch location, which has quickly become a must for Bermondsey Beer Mile-rs. 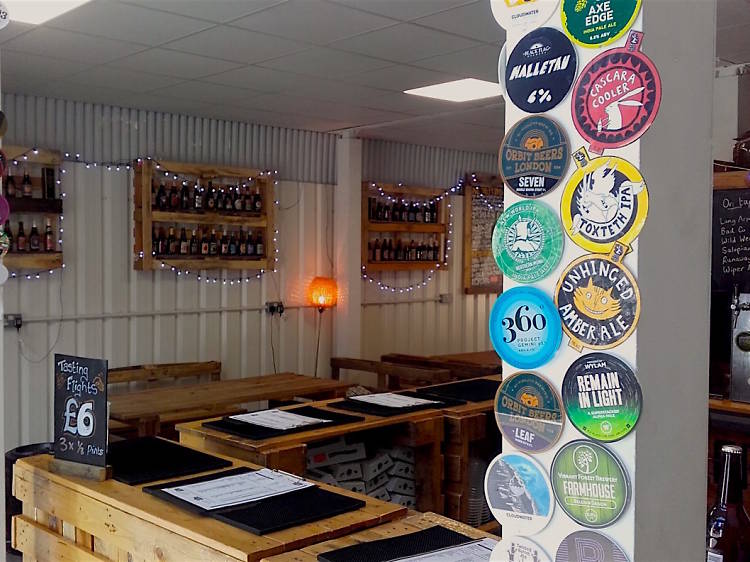 Another Bermondsey Beer Mile go-to, EeBria’s no-frills taproom is best known for its fun-first approach. Vanquish your foes in a high-intensity game of shuffleboard, play a few rounds on the old-school arcade machine, then treat yourself to a celebratory pint on a bright blue barrel outside. 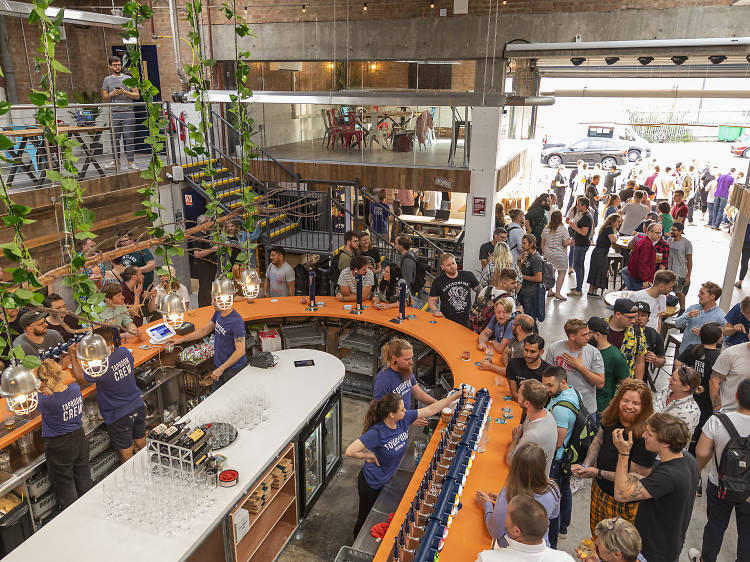 You can’t talk about the Bermondsey Beer Mile without mentioning Fourpure, who have long lorded themselves over Bermondsey’s southern starting point. They’ve just opened an enormous new ‘Basecamp’, which includes an eye-watering 43 taps, resident street food from Oh My Dog! and a lofty ‘treehouse tasting room’. 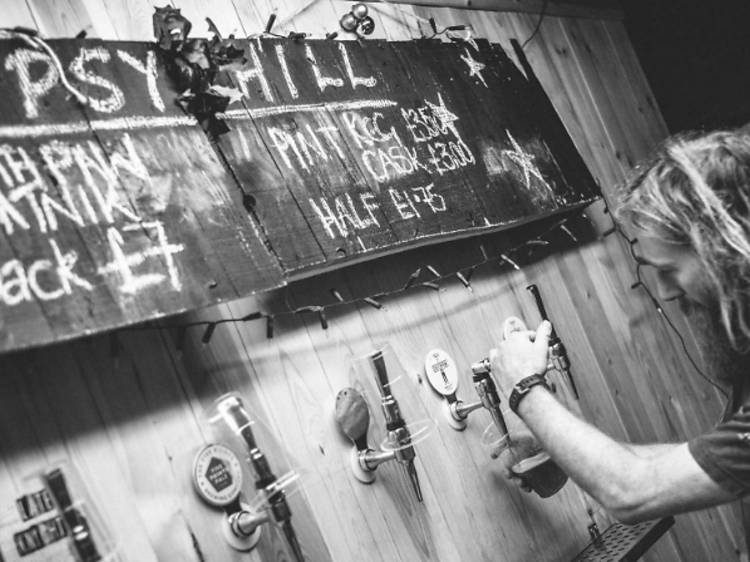 If you’re not drinking beer on an industrial estate, is it even summer? The fans of this tastefully done south-east taproom spill out into the car park, occupying picnic tables and chowing down on street food as they work through the brilliant beer on the lines. 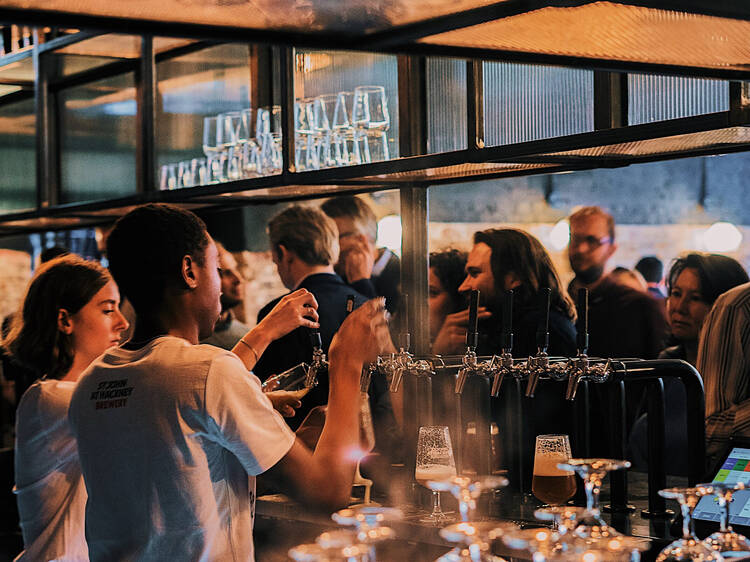 Check out this taproom-in-a-railway-arch for its charmingly pubby, walled beer garden. It’s a great spot from which to sample the east London brewery’s extremely drinkable range – and grub from barbecue crew Lagom seriously suits a session on the ales. 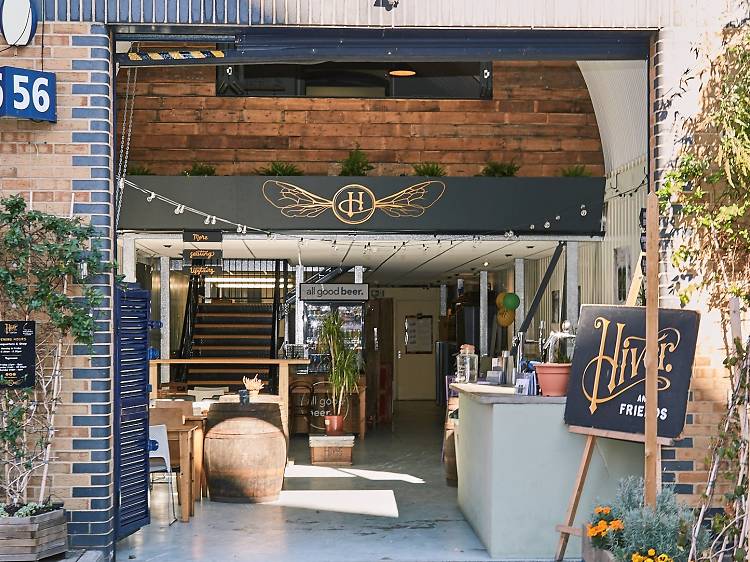 If you’re looking for something a little different, this is your place to go. Sure, it might seem like yet another Bermondsey brewery, but Hiver are unique because they use honey from urban beekeepers in the brewing of its beer. You can sign up to beer-and-beekeeping experiences, try its homemade honey or, on occasion, even help roll candles out of beeswax. There's even actual beehives on display inside. 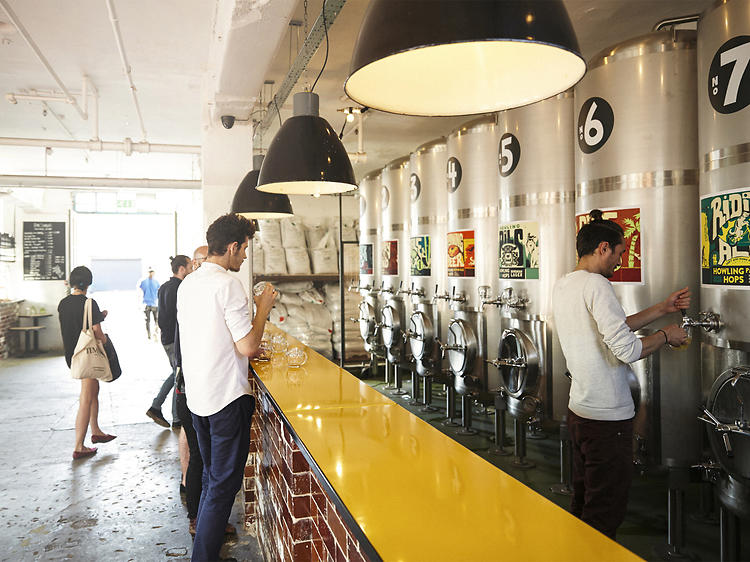 This big, roomy venue in Hackney Wick prides itself on being the UK’s first dedicated tank bar (that means no cans, bottles, casks or kegs). They don’t take bookings, preferring a disorganised and chatty crowd fill its Munich beer hall-style picnic benches. 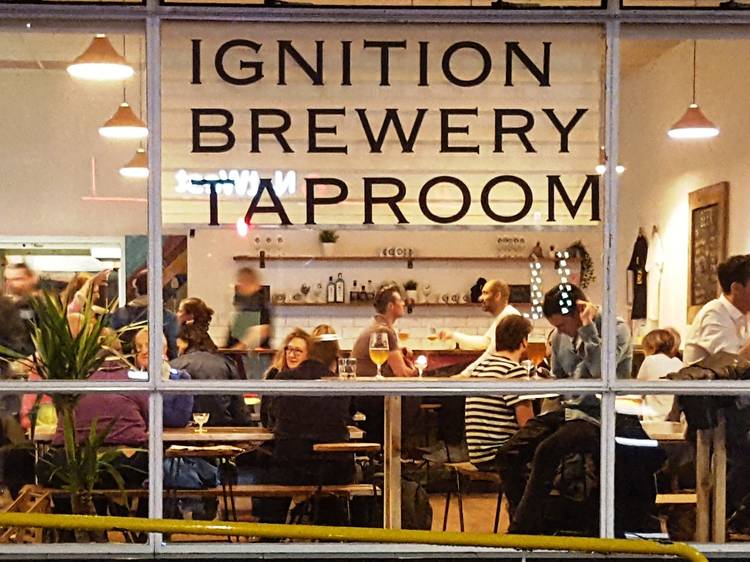 Sydenham’s Ignition Brewery is a small brewery with a big heart: both the brewery and the taproom are staffed by people with learning disabilities, who’ve been supported and trained to brew and serve delicious craft beer. 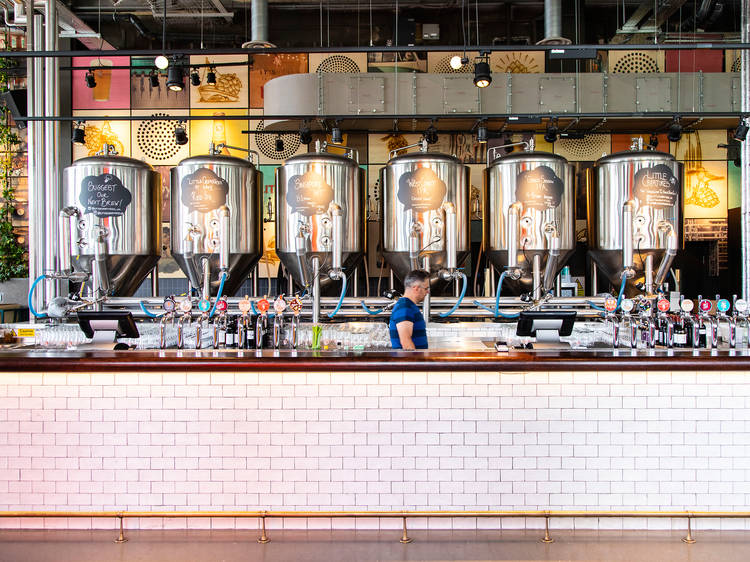 Add an antipodean flavour to your beer supping at the London HQ of Little Creatures, a Fremantle brewer that’s put roots down round the back of King’s Cross. Here they’re brewing London one-offs and pouring their famous pale ale on the taps from tanks above the bar. It’s a big space for group outings or you can take your pints outside for the full Aussie treatment. 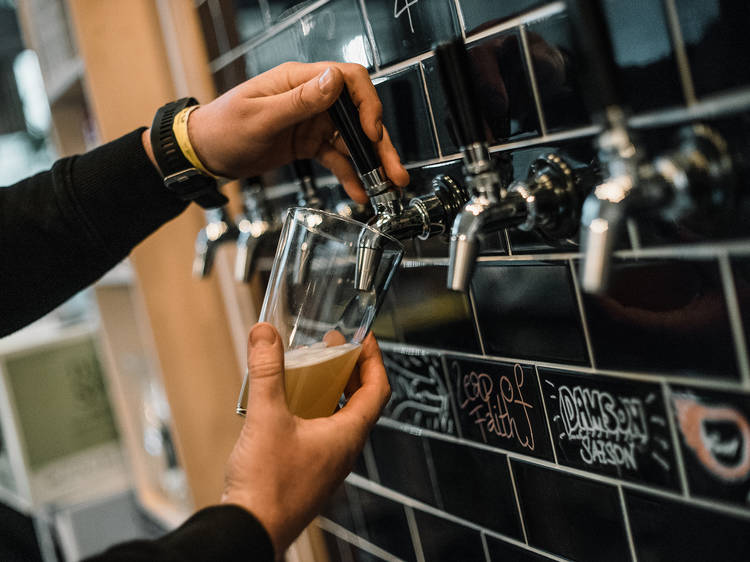 Deptford dockside taproom Little Faith is legitimately post-industrial, with a bohemian vibe that’s often missing in these places, and a decent outdoor space – you have to go back out the door and down the road to get there, but hey. There’s also a selection of industrial-y furnishings for sale, so you can get drunk and buy some factory lampshades instead of going home and doing it on eBay. 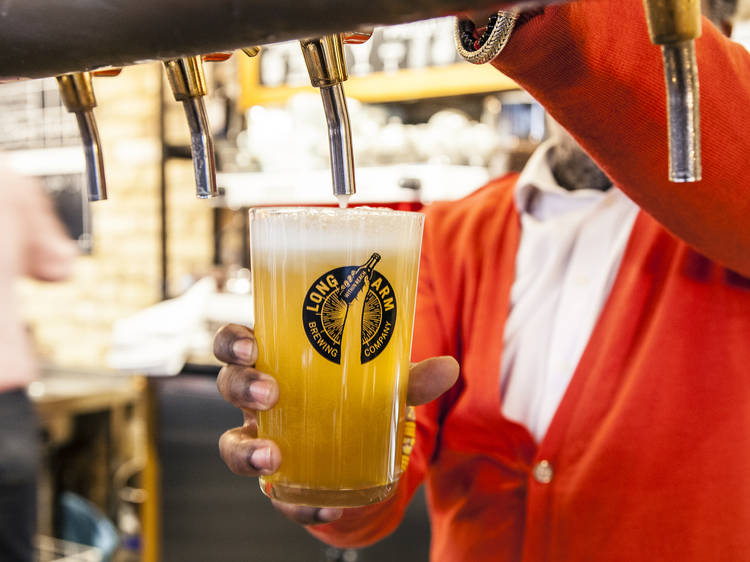 This buzzing ‘fully sustainable’ brewpub, which sits on the ground floor of the Montcalm Royal London hotel, is a go-to for beery City bankers and Shoreditch brew snobs. Kick back with a frothy pint, a plate of vegan food and a game of oversized Connect 4 to keep you busy. 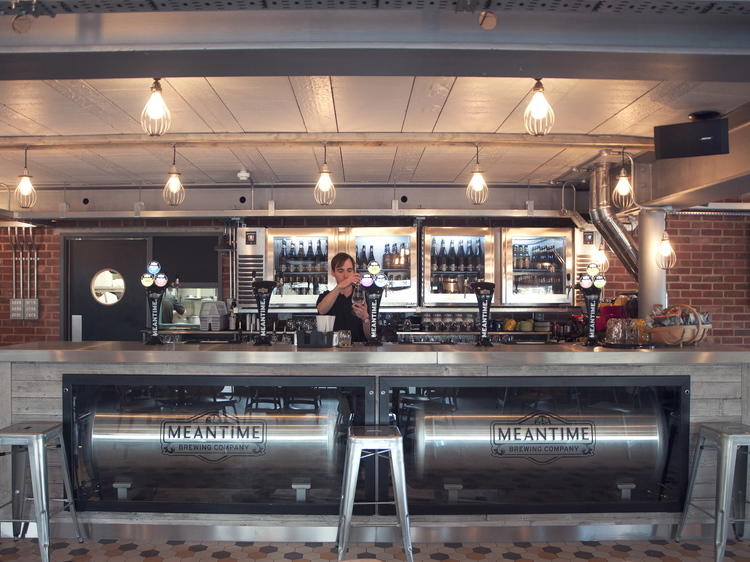 Meantime are so significant on the London beer scene that its most popular lager and pale are called, well, London Lager and London Pale. If claiming the city’s name isn’t enough, they might just claim the prize of best taproom too – The Tasting Rooms have a kitchen menu specifically designed to be paired with the tank-pulled beers on offer. 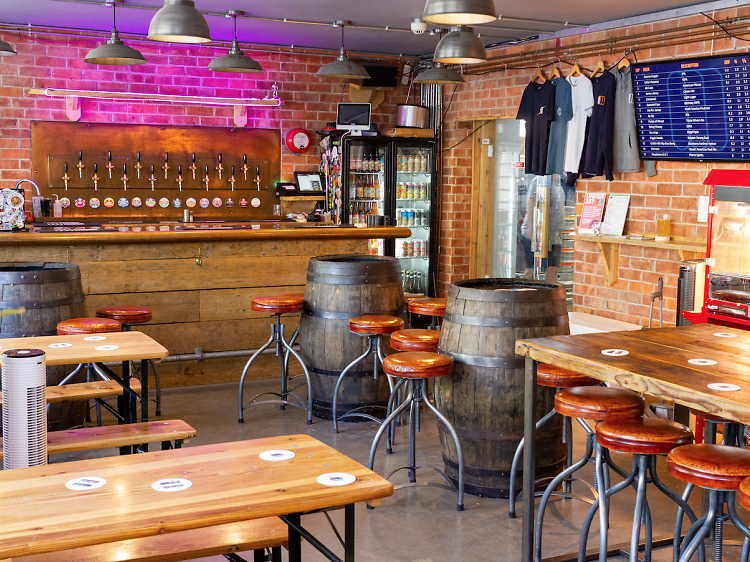 This Battersea ‘Tap House’ is aptly-named because from the outside it looks a bit like, well, someone’s house. Venture inside (no need of a doorbell) and you’ll find a rotating line of 15 beers, as well as fresh popcorn and flaky pastry goodness courtesy of Eli & Pie. 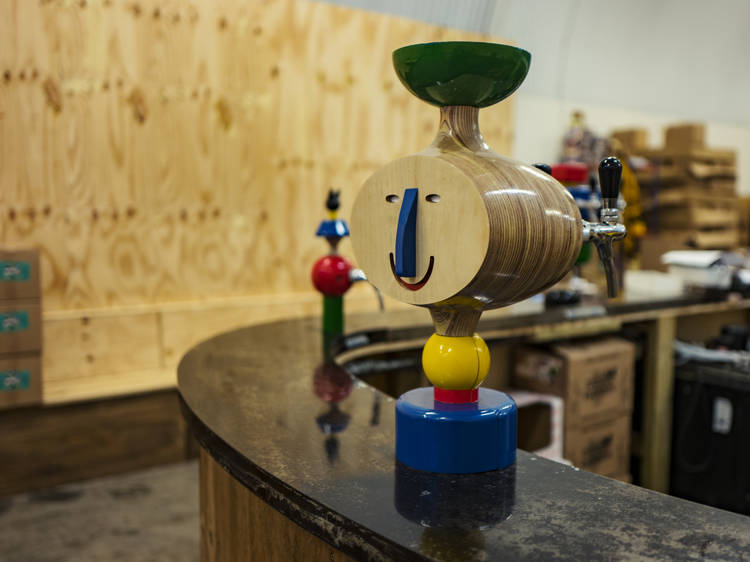 Partizan is famous for its quirky and colourful bottle designs, and this Bermondsey taproom is incredibly on-brand. Sip an ever-refreshing roster of beers from one of its bar taps, all of which are wood-carved into strange, colourful and (most importantly) Insta-friendly geometric shapes. 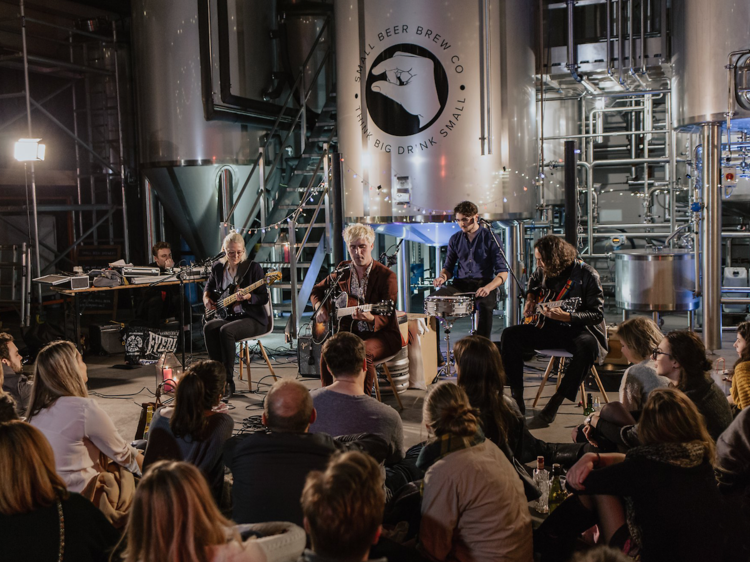 If you’re not a big drinker, the Small Beer Brew Co will be right up your little avenue. They offer a number of low-calorie, low-ABV brews, including a 1 percent dark lager and a 2.5 percent session pale, without sacrificing any of the flavour. All are available to try at its aesthetically-pleasing Bermondsey taproom. 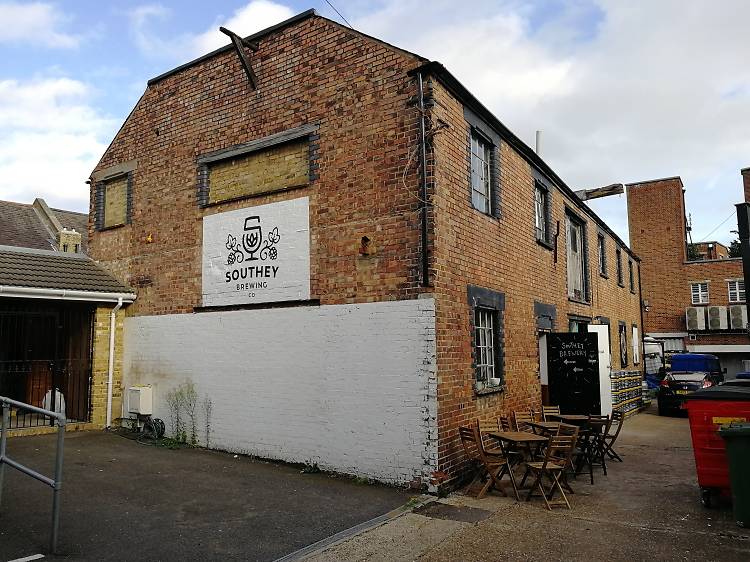 If our American cousins heard us say, ‘in an old Victorian warehouse in Penge’, they’d think we were quoting from one of the Harry Potter books. In reality, we’re just talking about the location of Southey Brewing Co, which has on-site tasting rooms that are about as close to an authentic, old-fashioned pub as a craft beer taproom can get. 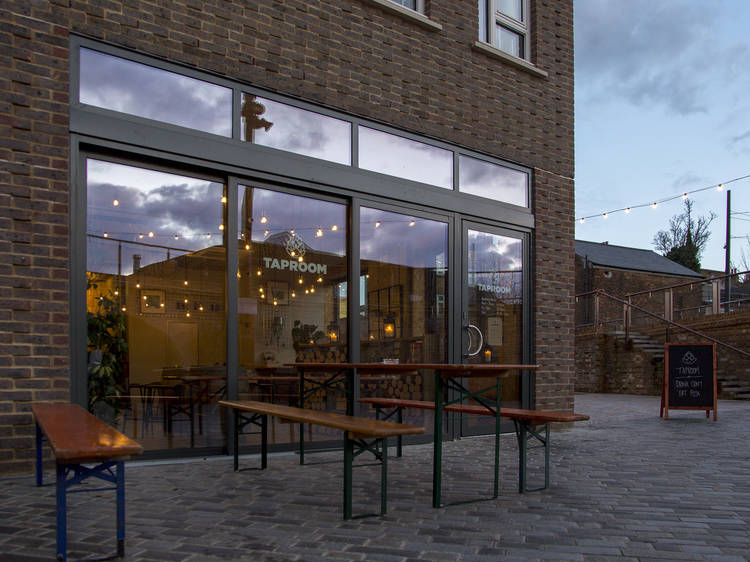 It’s easy to forget you’re in south-east London when sitting in the warm glow of Hop Stuff Brewery’s very own laidback boozer. Full of twinkling lights, reclaimed wine barrel tables and saucy smells from a little domed pizza oven, the vibe is more Continental than cockney at this taproom in trendy Deptford Market Yard. 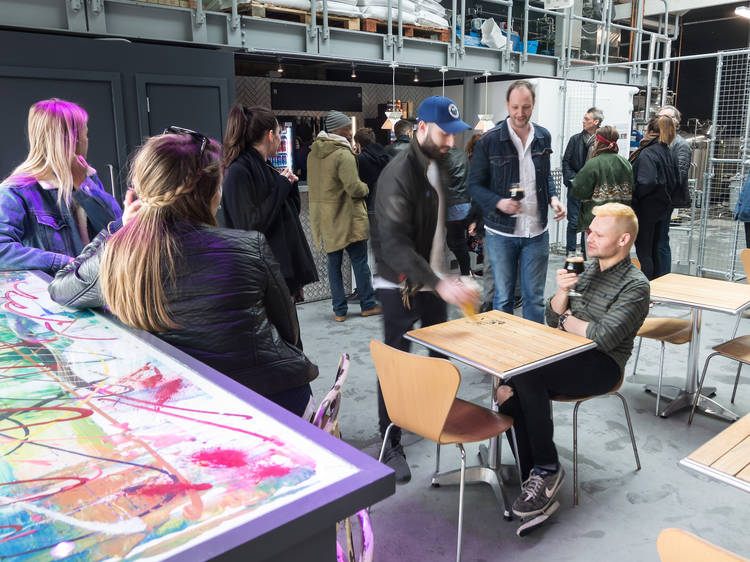 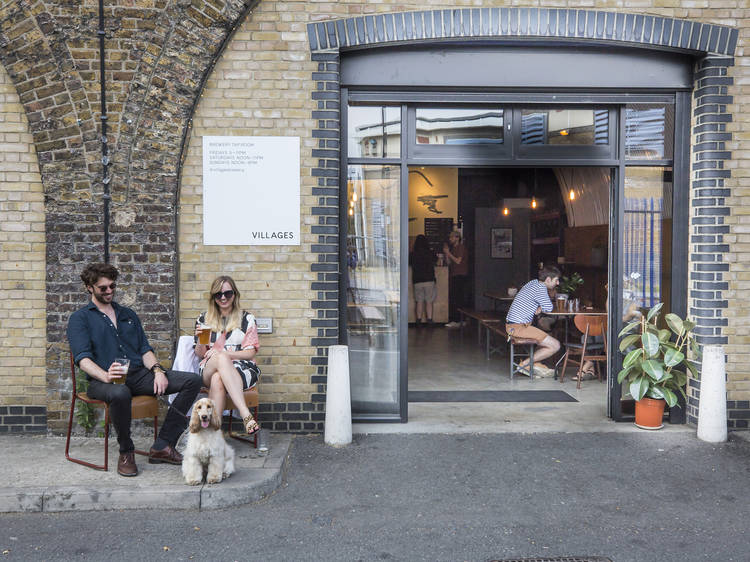 Although this independent brewery has only been producing pints for a couple of years, it has already established itself as a craft beer fixture in Deptford. Its taproom has the usual: concrete floors, woodchip furniture, naked light bulbs and potted succulents, plus unique fruity beers and the brewery’s trademark illustrations hanging above. 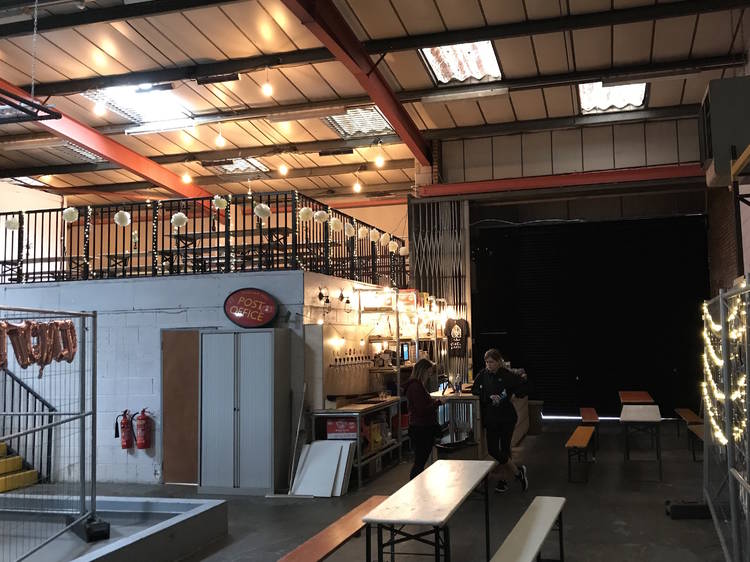