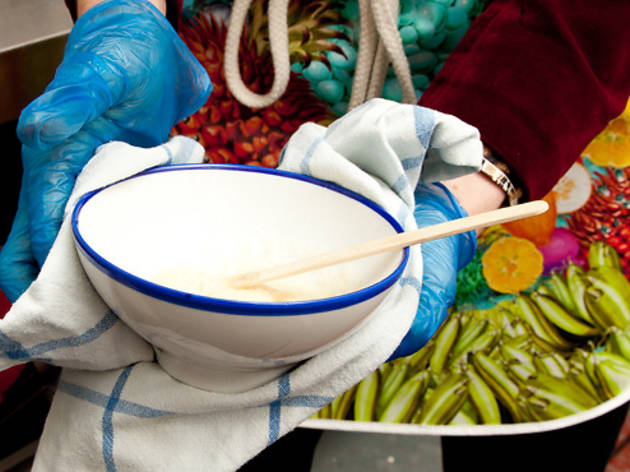 1/7
Get hold of some gum base, which is harder than it sounds. Technically described as a non-nutritative, non-digestible masticatory product, it&rsquo;s a plastic with zero nutritional value and the key ingredient in chewing gum. The minimum order from manufacturers across the globe is a quarter of a ton &ndash; so only attempt if you aim to make a lot of gum. Or you&rsquo;ve got friends who want to join in. Once you have the gum base, melt 10g of it together with the glucose and glycerine. Leave to cool. 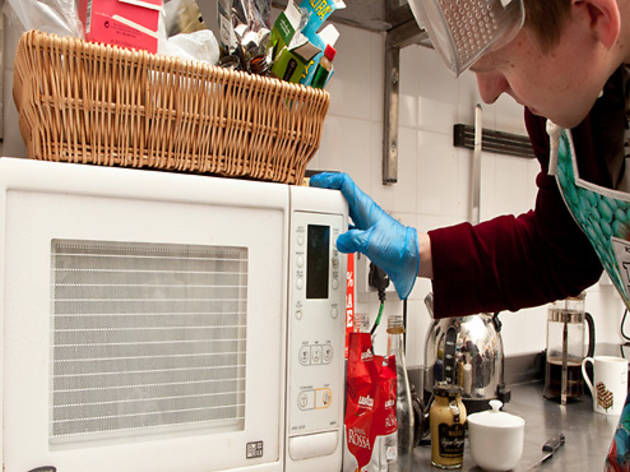 2/7
Place the mix in a plastic bowl and heat in the microwave for around 2 minutes. The time will vary slightly depending on your microwave, but the mix should be heated until it begins to bubble like lava. Stir. 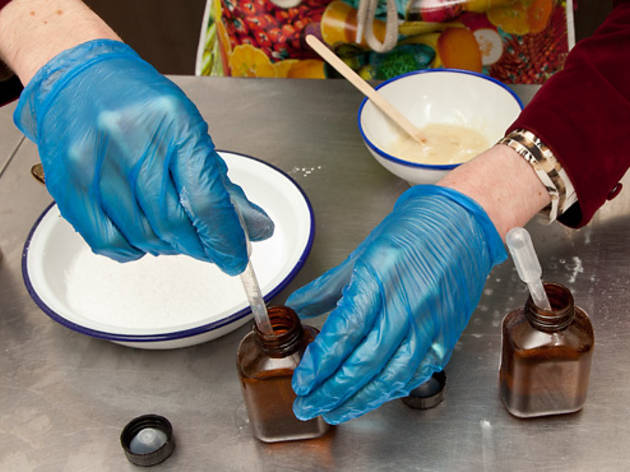 3/7
Once it&rsquo;s bubbling, you have to act quickly. Add flavouring: 0.25ml of conventional flavouring and 0.25ml of micro-encapsulated flavouring. Then add 1.5ml of citric acid and 1.5ml of water. Stir. 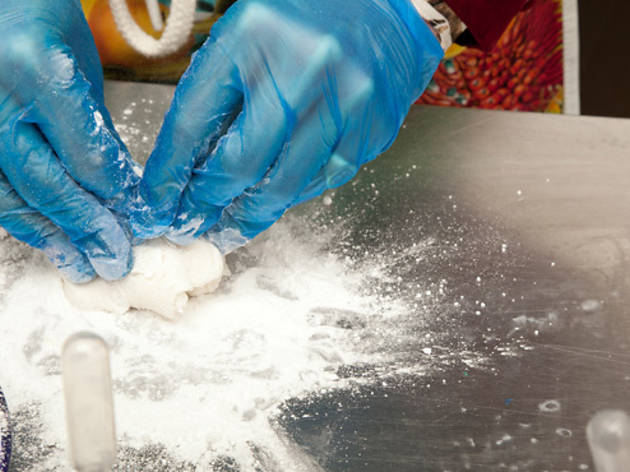 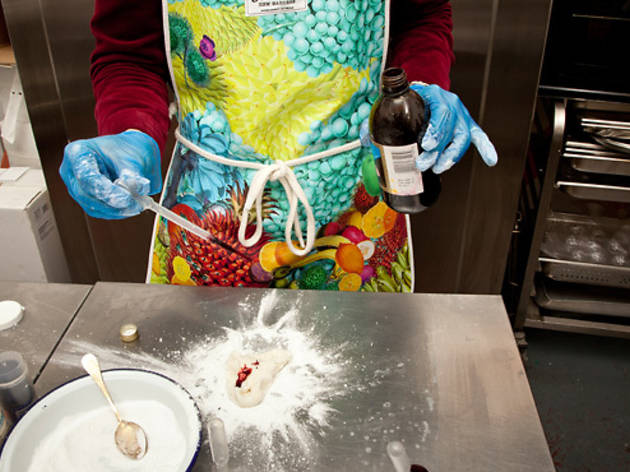 5/7
Pick a suitable food colouring and add 2 drops to the mixture. Knead until it&rsquo;s evenly mixed through. 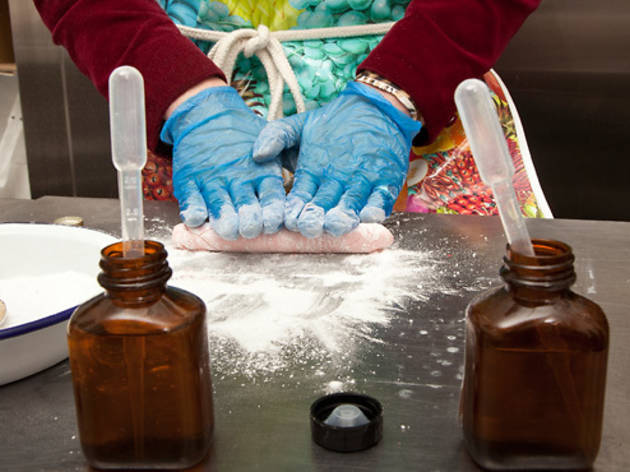 6/7
Sprinkle some icing sugar onto the table. Roll the gum out into a long sausage. 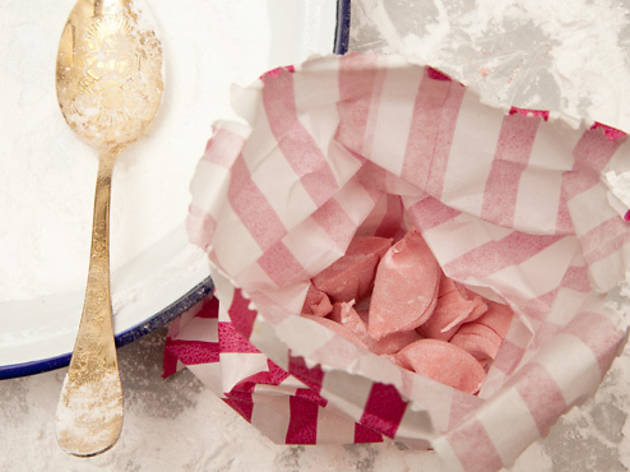 They’ve made houses out of chocolate, oceans out of jelly and ice cream that tastes like Christmas. As a big new musical version of Roald Dahl’s ‘Charlie and the Chocolate Factory’ opens in London, we went in search of London’s real-life Willy Wonkas – and their amazing creations. Mad-scientist-artist-jellymaker Sam Bompas tells Daisy Bowie-Sell how he and partner Harry Parr began experimenting with food as a hobby in 2007 and haven’t looked back.

Why jelly?
‘It’s a unique food: the wobble makes everyone smile and the first bite is with the eye. We also like its challenges – we had to learn from scratch how to model architectural jellies.’

What’s the strangest thing you’ve ever made?
‘A five-ton architectural jelly sea around the SS Great Britain. It was the length of two Olympic swimming pools and took an entire day to make.’

Was that also the hardest thing you’ve attempted?
‘Actually, it was relatively easy. The hardest was a four-ton chocolate waterfall and climbing wall, which we made for Alton Towers. Because it was for a themepark, it had to be made to the same spec as a North Sea oil rig.’

What’s your biggest disaster?
‘I once almost puked live on TV. A young producer kept pushing us to make ever-wackier flavoured jellies. I made one that was blackcurrant blancmange and zebra meat. It’s not good to taste one of your own jellies and then vomit.’

What’s your favourite flavour?
‘Durian. It’s a fruit from Southeast Asia and it smells like cat sick but tastes like caramel. You keep on having flashbacks of the taste for the next 24 hours – it’s like LSD.’

Is there one thing you’d really like to create?
‘One of my culinary heroes is the nineteenth-century French chef Alexis Soyer. His party trick was cooking an entire cow in one go and making all the different parts taste good. I’d love to do that.’

Mad jelly-sculpting geniuses Bompas and Parr are the closest thing to a real-life Willy Wonka you’re likely to find. Even though making chewing gum at home isn’t really a practical proposition, here’s a look at their fascinating method for making flavour-changing gum…

We hear Choccywoccydoodah worked on Tim Burton’s film version of ‘Charlie and the Chocolate Factory’…
‘Yes, it’s really funny watching the film and seeing our products hanging from the trees by the chocolate river.’

What’s the strangest cake request you’ve ever received?
‘We get a lot of really crazy requests, but not all of them translate very well into cake. The maddest request we’ve ever had was for a charity that supports ex-drug addicts. They wanted something that represented struggle and celebrated coming out of addiction. They suggested a cake with syringes and drug paraphernalia stuck on it. Christine [the creative director] didn’t think that was the best way to go, so we ended up veering towards unicorns and other light-at-the-end-of-the-tunnel themed things instead.’

What’s the most major confectionery disaster you’ve had?
‘It was the biggest candy house we’ve ever made. It was a couple of metres long, a metre-and-a-half wide and a-metre-and-a-half high, and was for a charity for homeless people. Transporting the house from Brighton to London was catastrophic and it ended up in a pile of sugary rubble. Heartbreaking.’

If you could make a cake for anyone, who would it be?
‘I think Elvis would love us.’

There’s no doubting the Choccywoccydoodah team’s Wonka-credentials. So, what can they do with a simple cup of cocoa? Make it into a scrumptious whipped cream delight, of course.

Ingredients
- A small handful of chocolate buttons (white, milk, dark or a mixture of all three – the best quality you can afford)
- A cup of hot milk
- 3 marshmallows
- 50ml double cream, whipped
- 1 chocolate straw
- Cocoa powder, to sprinkle Paul Wayne Gregory once made Michael Jackson’s head entirely out of chocolate. If that’s not the best sentence you’ve seen this year, this reading thing might not be for you. The award-winning sculptor talks to Flo Wales Bonner about his love for ‘the food of the gods’.

Where do you get your inspiration?
‘I look at things not made of chocolate and think: How can I make that out of chocolate?’

What’s that in the corner?
‘It’s a chocolate cement mixer.’

What’s the weirdest thing you’ve made out of the brown stuff?
‘A 6'5" man, standing behind a chocolate table. Nearly everything on the table was chocolate, too – a chocolate bowl, chocolate cutlery. He took a week to make, and then we realised we’d forgotten to give him hands. Next I want to do a molten chocolate lake, with chocolate boats on it that melt before they reach the other side.’

Have you ever made yourself out of chocolate?
‘It will happen.’

Any chocolatey disaster stories?
‘A sculpture I made for a car company event kept falling apart – I had to stand next to it all night sticking bits of it back on. And some experiments just don’t work. I was once asked to make red-onion-and-tomato chocolate for a Spanish wedding. Believe it or not, the flavours worked individually. But together? Bloody horrible.’

Why is chocolate so intriguing to the human species?
‘It’s the food of the gods. Its effect on us can’t be explained.’

Find Paul Wayne Gregory’s creations at Harvey Nichols, 109-125 Knightsbridge, SW1X 7RJ, www.harveynichols.com; Alexeeva & Jones, 297 Westbourne Grove, W11 2QA, www.alexeevajones.com; www.formanandfield.com and www.paulwaynegregory.com. They’ll soon be available at Selfridges and Harrods, too. Sweetcorn. Runner beans. Salad cream. The folks at Chin Chin Labs don’t seem to think there’s anything that can’t be improved by being exposed to nitrogen and turned into ice cream. Phil Harrison went to find out just how right they are.

What’s your signature flavour?
‘We have seasonal favourites. For Wimbledon, we did strawberry and hay ice cream using hay-infused milk. And we did Christmas-tree ice cream, which tastes like the smell of a Christmas tree.’

How long does it take to make one ice cream?
‘It used to be four minutes but we’ve got it down to about a minute now. When it’s busy, I’ll do five at a time. All the mixers going and nitrogen billowing everywhere!’

So it’s a spectacle too…
‘Of course. Although sometimes people think it’s a gimmick. And it’s not – nitrogen makes the smoothest, most dense ice cream. People don’t always get how much love goes in to each one!’

Any disasters?
‘When the volcanic ash cloud happened we tried ash-flavoured ice cream. We incinerated gunpowder tea and then strained it through muslin. It tasted like grit.’

Any more inventions we should know about?
‘Sour cherry gummy ice cream. It sets because of all the gelatine; we call it “the gumsicle”. People love it! We always get plenty of requests for it for birthdays.’

Can you cook with nitrogen at home?
‘Yes. Get some dry ice, blitz it into a powder, then add it to your ice cream base little by little. You’ve got to make sure it’s really finely ground. If pieces are too big, they’ll burn your mouth.’

Most shocking cake you’ve made?
‘For the first of our annual Eat Your Heart Out events in 2010 we had cake versions of shits on sticks and something called “Two Girls, One Cupcake”. We were being purposely provocative.’

Why do that stuff?
‘I don’t see the point of doing things that don’t provoke a reaction. Plus, we usually try to educate people. Our blackened cookie lungs cake comes with a leaflet about lung cancer and we did STD cupcakes to promote sexual health. They ended up being featured on the “Oprah Winfrey Show”!’

Do you ever shock yourself?
‘The vomit cupcakes we did for “The Helpers” film freaked me out. It was just candied fruit and condensed milk, but I was going “bleurgh”!’

Worst kitchen disaster?
‘We have a big problem in needing to protect any cake we make for exhibitions, as a member of the public will always try to poke it or eat it. Someone once cut open a six-foot-long rainbow cake we were exhibiting.’

Biggest reaction that you have ever provoked?
‘I do non-cake events, too, and we did human butchery with meat shaped into human body parts. I was reported for inciting cannibalism, but sadly the police never bothered to interview me…’

You've heard of window-lickers? Well, prepare to become a wall-licker, as Miss Cakehead and collaborators the Tattooed Bakers recreate Willy Wonka’s lickable wallpaper, as seen in the film ‘Charlie and the Chocolate Factory’.

Servings depend on how much wallpaper each person wants to lick 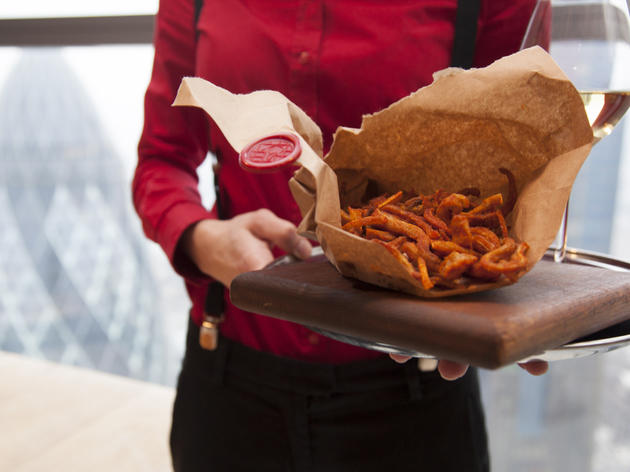 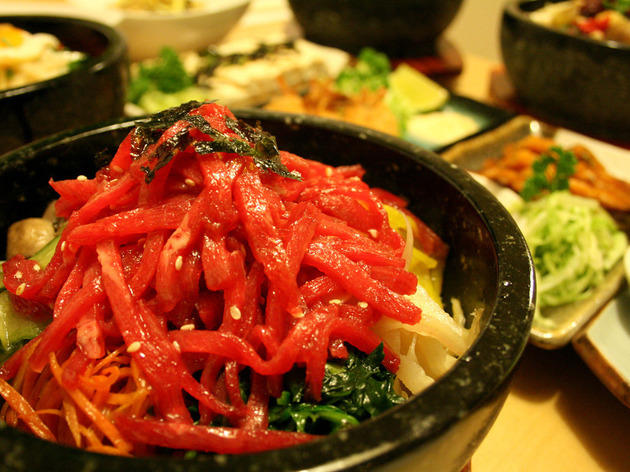 Bargain bites can still be had in London – here are our critics' picks. Read more cheap eats 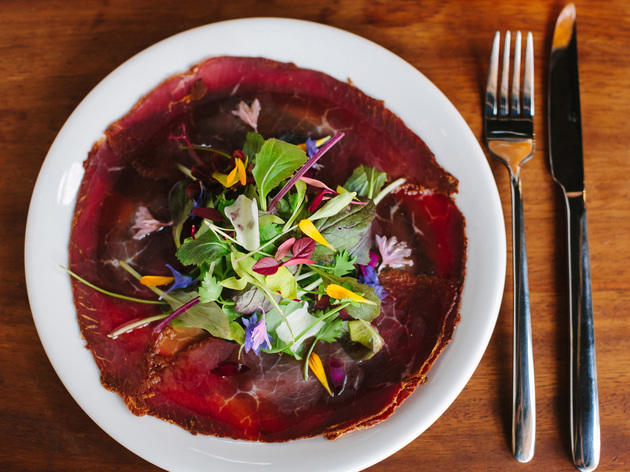 Feast your eyes on the top restaurants in London. See the full list here. 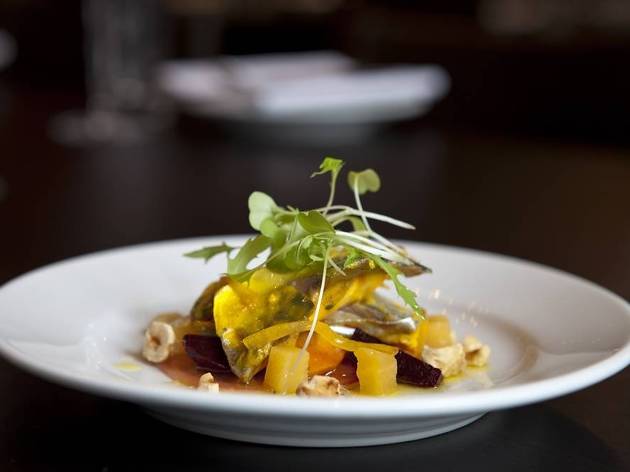 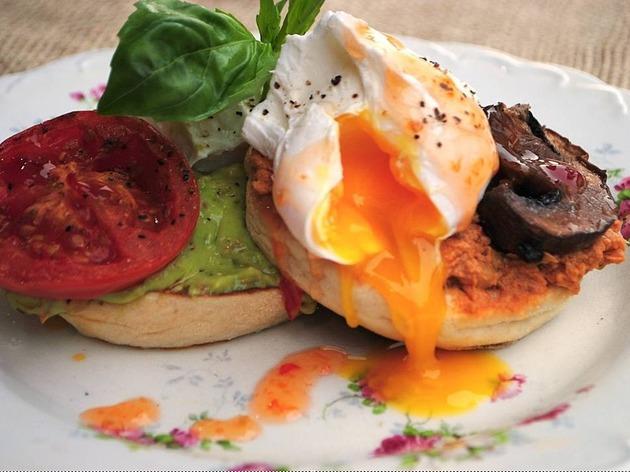 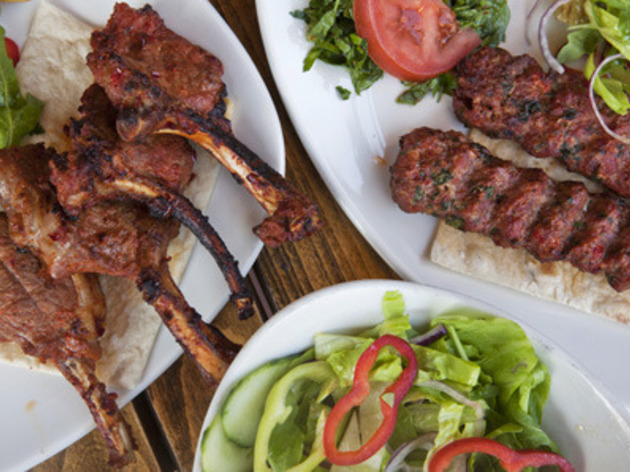 Our tips on quirky places to eat in the capital. Find quirky restaurants, cafes and bars