Really there are two central Londons: the buzzy West End and, east of it, the financial district of the City, so there's plenty to choose from when looking for somewhere convenient to stay. Within the West End are districts as diverse as Soho and Mayfair. The former was once a marginal area of dodgy clubs and brothels, but is now London’s entertainment epicentre, with iconic long-established pubs and buzzing new restaurants. The latter playin ghost to luxury shops, exclusive restaurants and some of the country’s most expensive property. Most of the capital's top hotels are clustered in this area, but don’t discount the rest on our list – for price, location and style, we think they’re the best hotels in central London. 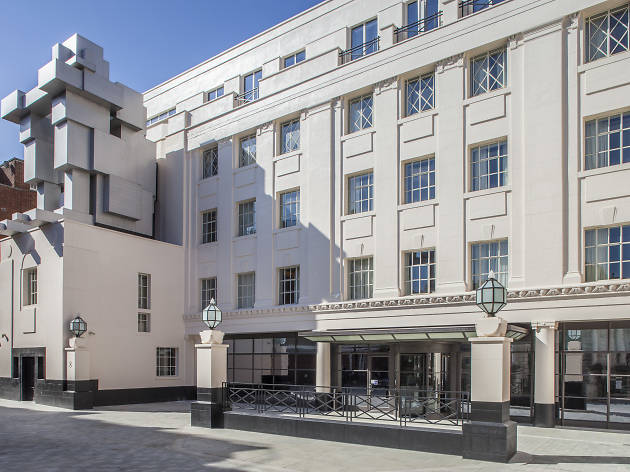 This luxury hotel with an art deco vibe was built in the shell of Selfridges’ old garage. The conversion was so skilful that the hotel looks as if it’s been here forever, with dark wood panelling, curvy deco furnishings and portraits on the walls creating a luxurious, clubby feel. The Colony Grill does grillroom glamour to a tee, with rounded banquettes, 1920s sporting murals, and black-and-white photo portraits. In stark contrast is Antony Gormley’s much-discussed ROOM, a LEGO-like sculptural addition with a room at its heart. 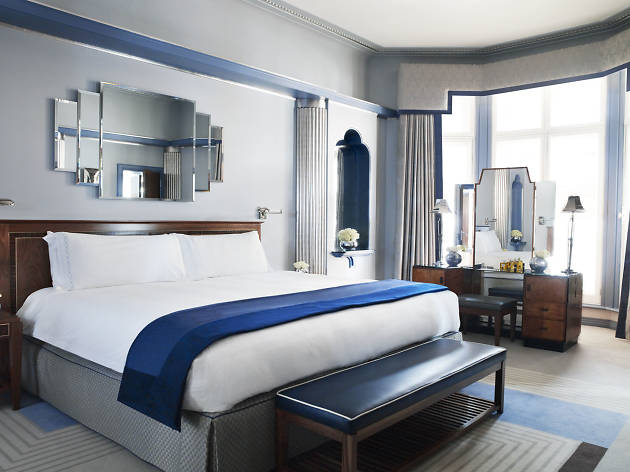 The epitome of the grand art deco hotel – from the after-dark, masculine charm of the Fumoir cocktail bar, to the more delicately feminine foyer, with its Medusa-like Dale Chihuly chandelier. Claridge’s has hosted many starry events through the years and always attracts a fashionable crowd to it's main restaurant, with smart grey and stained-glass skylights (it's currently handing over to Davies and Brook, due to open in autumn 2019). Some guestrooms continue the deco theme, while others are more classic, but all have beautiful furnishings. White marble bathrooms are suitably luxurious and comfort is key: bedside panels control all the room's mod cons. 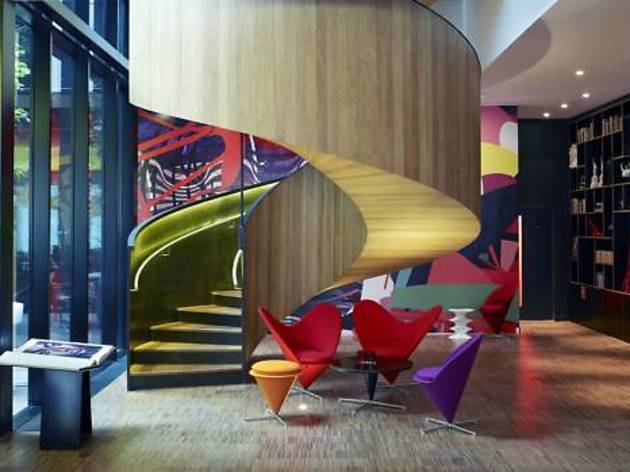 Youthful, contemporary styling starts in the comfortable lobby, where Vitra furnishings and books (they’re for sale) create a real living space. Budget-priced rooms are very small but perfectly formed, with wall-to-wall windows adding a sense of spaciousness. High-pressure showers, a tablet to control technology, and gigantic beds – which fill up most of the room – make for a very comfy stay; add in the friendly canteenM, open all-day for breakfast, lunch, simple dinners and drinks, and you may find it hard to leave. 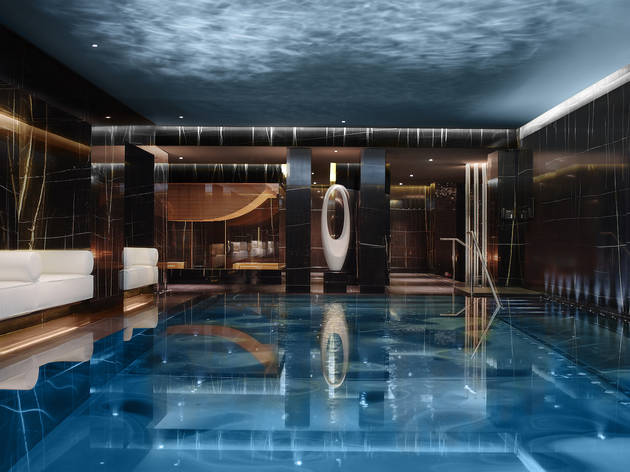 Converted from Whitehall offices, the Corinthia wears the mantle of a grand hotel making good use of the original structure, while maintaining an airy, spacious and contemporary feel in public spaces like the beautiful lobby and the circular Northall restaurant. From the high-tech rooms with super-soft furnishings, marble bathrooms and oval bathtubs, to the peaceful subterranean pool on a ‘thermal floor’ with sleep pods and heated loungers, this place envelops you in luxury. 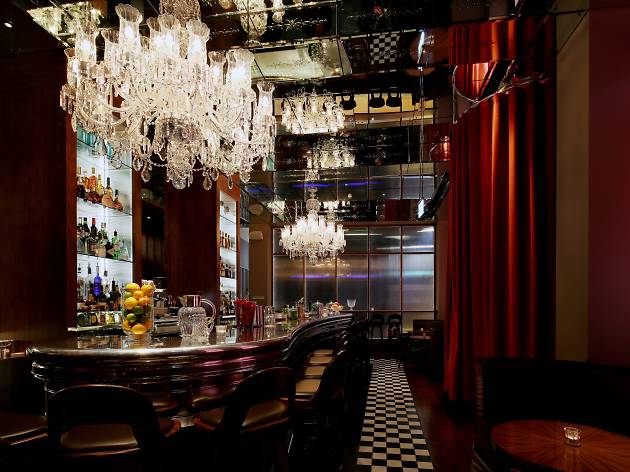 A second rebirth of a railway hotel (alongside the nearby, pricier Renaissance St Pancras), the 1854 Great Northern Hotel, with its well-known curved façade, retains the spirit of its heyday. Luxuriate in the public spaces such as the GNH Bar, opening directly onto King’s Cross station, with its chandeliers and Belle Epoque mirrored ceiling. By contrast, rooms are sleek, chic and contemporary, with vintage-style Lefroy-Brooks bathrooms. Some are panelled in dark walnut, while smaller ones are modelled on sleeper carriages. 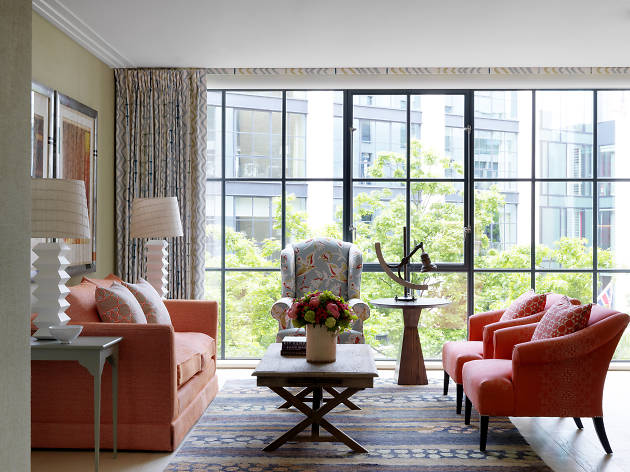 Designer Kit Kemp has stamped her particular brand of bold decor mixes on to Ham Yard, flagship of the Firmdale hotel group, known for its distinctive take on boutique luxury. You’ll find splashes of bright colours on a dove grey palette, English chintzes mixed with sober stripes, and traditional furnishings juxtaposed with funky art. Floor-to-ceiling windows bring in light, and the whole effect is sumptuously comfortable. Ham Yard includes a whole central courtyard of curated independent shops, and on the roof is a secret, leafy garden. 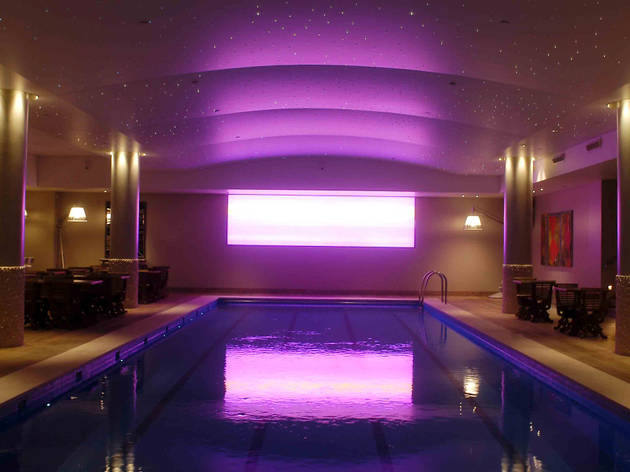 A classic Regency exterior fronts another Firmdale hotel, with designer Kit Kemp letting loose her winning combinations of classic styles and English florals with bold, contemporary colour combinations and quirky sculptures and patterns. Guestrooms match traditional furnishings with the same eclectic mix. The Haymarket’s USP is its funky subterranean pool and party area, with a pewter bar, gold furnishings and pillars, a ceiling dotted with tiny fibre optic lights and an ever-changing lighting installation that bathes the space in an atmospheric glow. 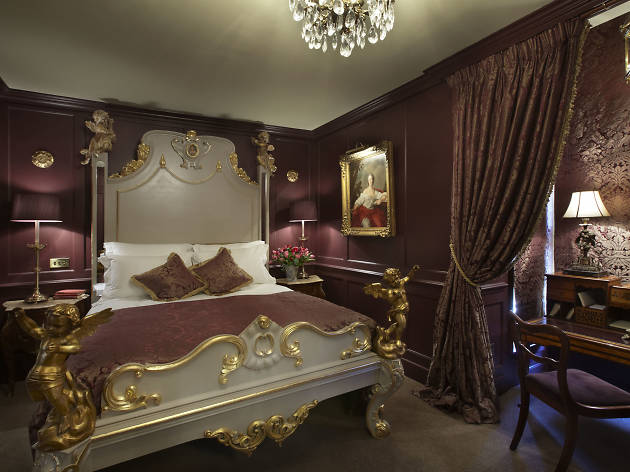 Hazlitt’s is the antithesis of modern minimalism. Set in four Georgian townhouses in Soho, this place is an extravagant evocation of the Georgian era, with painted panelled walls, open fireplaces, antique furnishings and old oil portraits in gilt frames. Individually furnished bedrooms continue the theme, with free-standing tubs, heavy curtains, and four-posters or exquisitely carved half-tester beds. Modern comforts are discreetly in place, however, with modern heating/air-conditioning and TVs in antique cupboards. 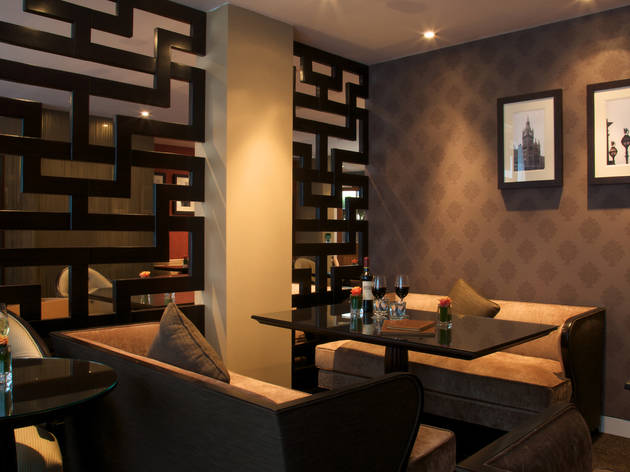 Housed in a gracious Marylebone townhouse, No.10 Manchester Street is a small hotel on the conservative end of the spectrum, with decor that’s classic, but warm and stylish too. Some of the plush bedrooms have touches of pale greeny-blue and dark red matching the caramels and creams, and courtyard rooms have access to their own little piece of patio. There’s a masculine touch at the indoor cigar bar, with a collection of Havanas and pictures of famous men smoking them, and all-weather smoking terrace. 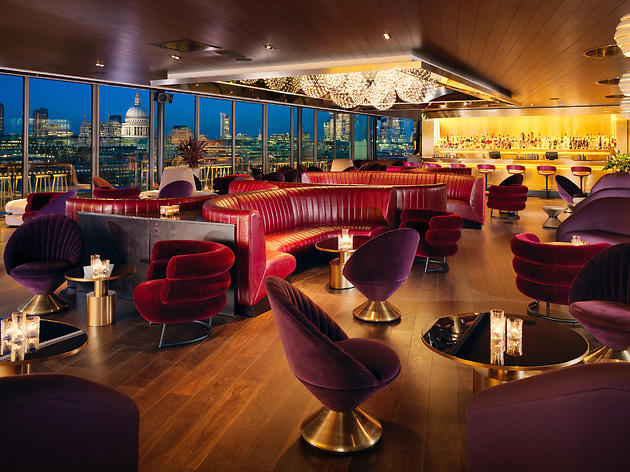 Cutting-edge design and a brilliant South Bank location are the Mondrian’s two best assets. Public spaces are playful, colourful and retro, with picture windows overlooking the river. The 12th Knot bar (on level 12) has a great river view, while the dusky pink and dark green Lyaness has an outstanding cocktail menu. Rooms, designed by Tom Dixon, are super-modern, of course, with blocks of reds, blacks, pinks and greys adding a 1980s vibe. Design items in rooms include Tom Dixon’s signature wingback chairs. 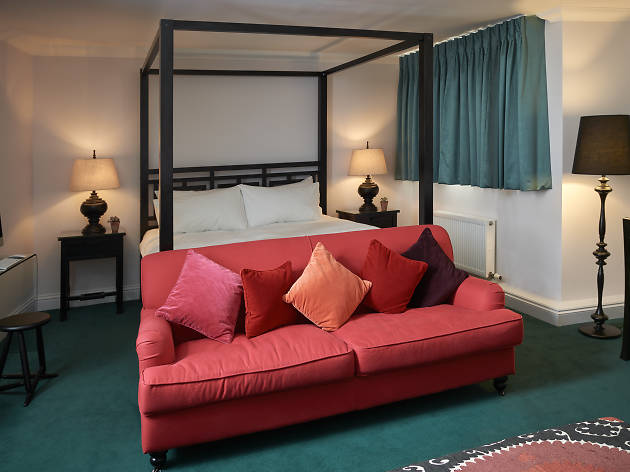 Converted from a Georgian townhouse, Myhotel is quietly contemporary and comfortable. Standard rooms are simple but stylish, with white or cream walls and white subway-tiled bathrooms. Larger superior rooms add some bold colour – like blacks and royal blue – to the mix. The My Place penthouse is a stunner, with dark wood panelling and floors, and access to the roof terrace. Bright spaces on the ground floor include Gail’s Kitchen, with soft tan leather banquettes, and Gail’s Bakery, an artisan bakery and café. 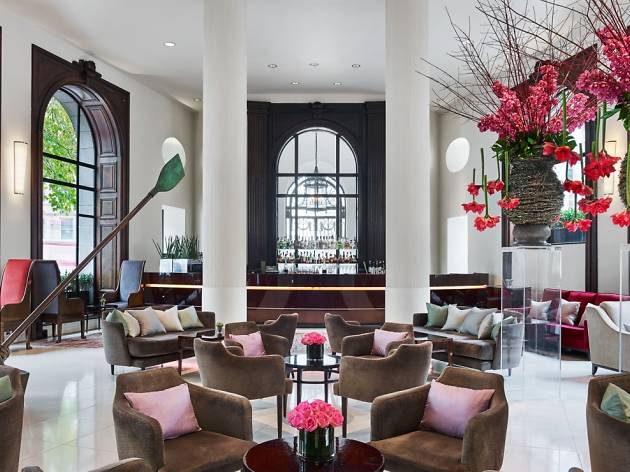 Once the offices of the long-defunct Morning Post, One Aldwych has taken a grand old structure and imposed some stunning yet simple contemporary style. The striking double-height white lobby, with floor-to-ceiling windows framed in dark wood, is the heart of the hotel and home to a lively bar. Eneko Atxa – of the three-Michelin-starred Azurmendi in Bilbao – has brought creative Basque cuisine with his eponymous restaurant. Luxurious guestrooms have original art, and the tranquil subterranean pool doesn’t only look beautiful, it’s chlorine-free and has an underwater music system. 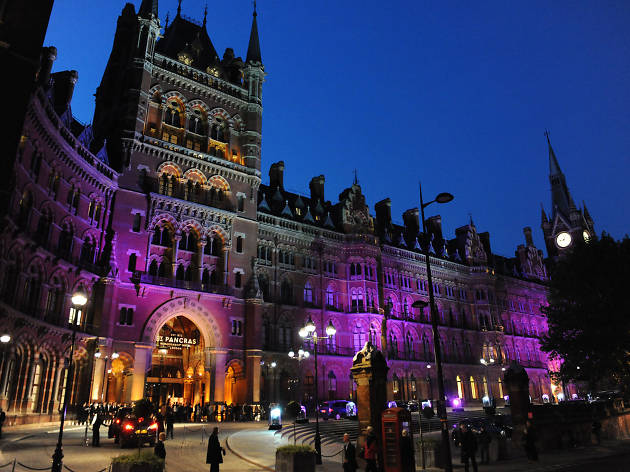 A meticulous restoration has breathed life back into this landmark neo-Gothic structure, built as a railway hotel in the Victorian heyday of the steam train. Impressive original structural elements, such as the huge grand staircase and arched windows, are matched with faithfully authentic decoration, with fleur-de-lys wallpaper, painted ceilings and faux-medieval murals. Most of the guestrooms take a more restrained approach, opting for contemporary luxury. Tiled walls around the blissful underground pool, part of the hotel’s spa facilities, lend a Victorian-Moorish vibe. 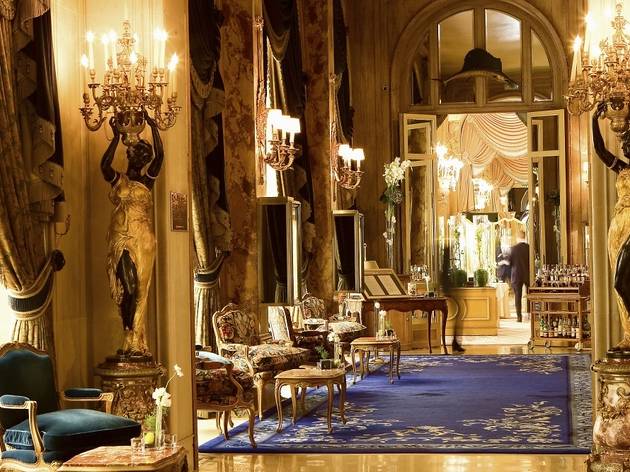 For all-out palatial excess, it’s hard to beat the storied Ritz. The Michelin-starred Ritz Restaurant is a riot of murals, ceiling frescoes, statues and drapes. The Long Gallery goes further, with chandelier-bearing statues, rococo mirrors and marble pillars. The legendary Palm Court, where afternoon tea is served, has a conservatory ceiling, gold statues and chandeliers. Guestrooms have a much-toned-down version of downstairs’ empire-style furnishings and decor, with relaxing pale colours. Needless to say, they are supremely comfortable. 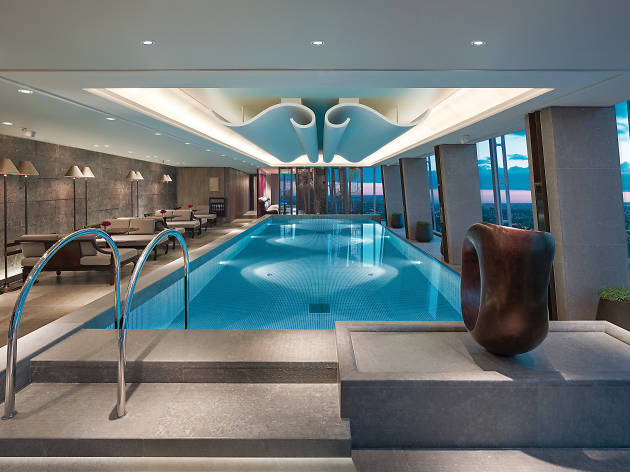 Way up high in the iconic glass-covered Shard at London Bridge, this luxury hotel is all about the views. On floor 34 there’s a spacious foyer and restaurant in the kind of neutral luxe style you’d expect. Above, guestrooms have floor-to-ceiling windows (even in the bathrooms) and are furnished in glamorous Asian-international-contemporary style with luxury materials like marble and silks. The indoor Skypool on Level 52 provides a tranquil if surreal spot for a swim, with bar and restaurant Gong next door. 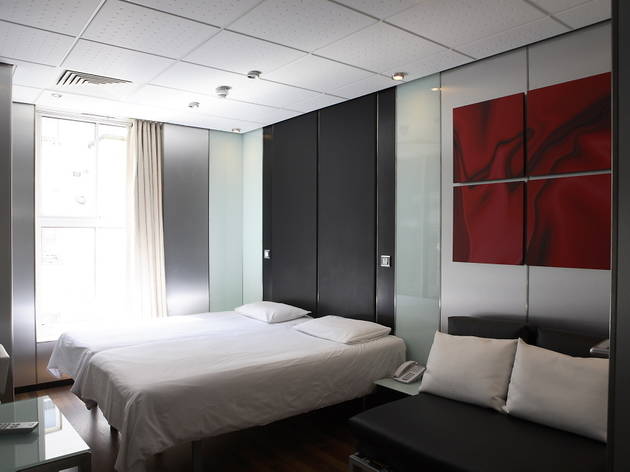 Behind a white stucco nineteenth-century façade in Paddington is a retro-futurist’s dream of a budget hotel. Stylorooms, as they’re known, have aluminium panelling, upholstered royal blue wall panels and headboards, royal blue curtains and pod bathrooms. They come in various bed combinations, for up to four people. There are also smart suites, with a kitchen and dining table, in a building around the corner. There’s complimentary tea and coffee in the stylolounge, which is done out in glass and stainless steel, with comfortable sofas. 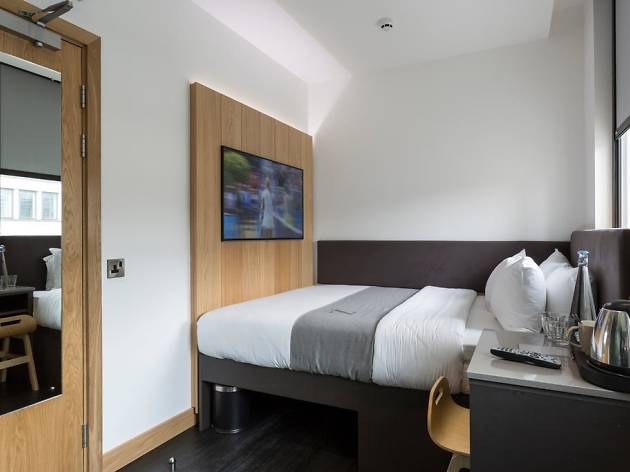 The Z chain may not be as glitzy as the other options in our list, but with a branch on Fleet Street and five more across the city, you can't beat it it for affordability in great locations. Though small, the rooms are designed ingeniously, with smart bathrooms, comfy beds (albeit against the wall to save space), and a calming, neutral palette. If you want to save even more money, you can opt for room without a window. 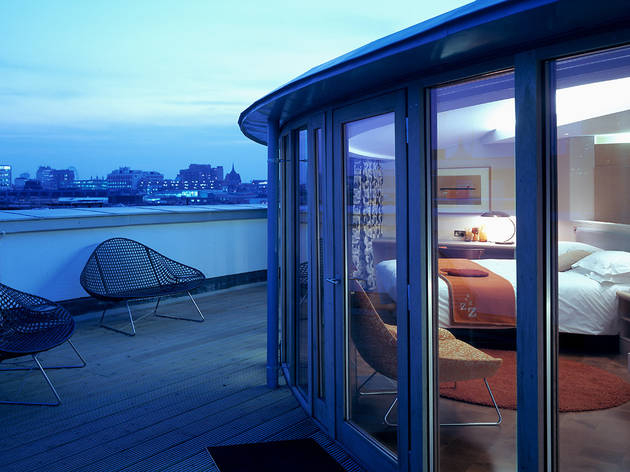 A stylish hotel in the shell of a Victorian Clerkenwell warehouse. Rooms are clean-cut and contemporary, with painted bare bricks (in some) and colour splashes from paintings and furnishings. Spacious ‘rooftop studios’ have private balconies and creature comforts are well taken care of in all rooms, with REN toiletries, fluffy bathrobes and a selection of Penguin classics and magazines. Downstairs, the Club Zetter wine bar and kitchen is a colourful 1960s-style space with good wines and beers and an all-day menu. 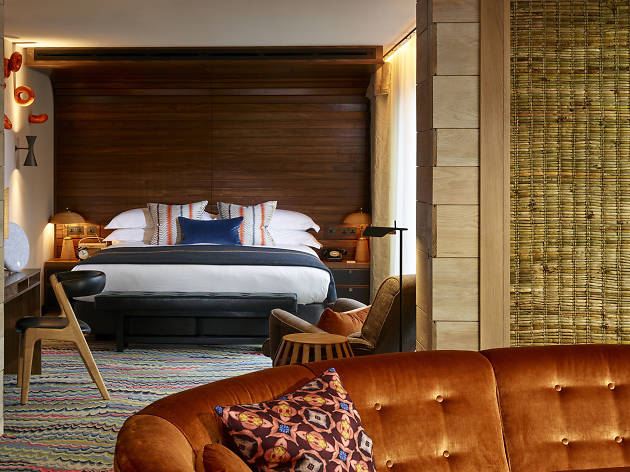 The Hospital Club, a private members’ club aimed at creative industry workers, has 15 boutique rooms. They follow the club’s other spaces with an eclectic mid-century retro look, but with an added dash of Southwestern ranch: there are polished wood-plank walls, multicoloured rugs, and ochre, orange and brown colour schemes. Vintage telephones and alarm clocks round off the look. Rooms vary in size (and price), with little ‘sleeper’ rooms – with no windows – the very cheapest. 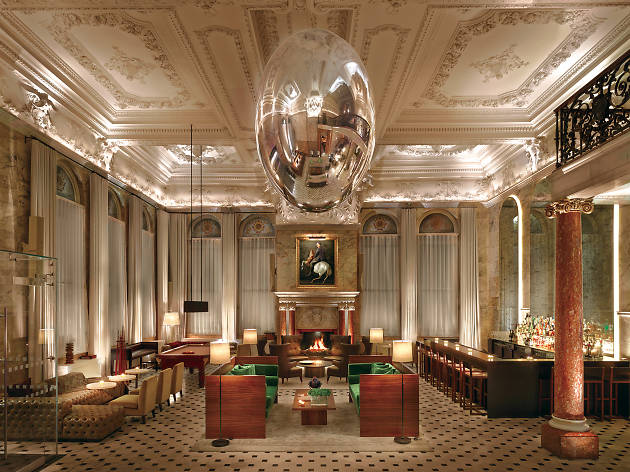 Dramatic public spaces create a real buzz at Ian Schrager’s London Edition. There’s the grand lobby, with its double-height rococo ceiling, floor-to-ceiling windows and marble pillars – matched with a huge stainless steel orb hanging from the ceiling. It’s home to a popular bar. The striking Berners Tavern has more ornate stucco and walls covered top to bottom in paintings. Rooms, on the other hand, go for a luxury hunting lodge or dacha vibe, with faux fur throws on sumptuous beds and wood-panelled walls.