From pious presidents to devious MPs, these are television’s most memorable portrayals of people in power

Ever year seems to see a new dip of confidence in our public servants. But would we be better off with fictional characters running the world's governments? We'd probably all prefer Jed Bartlet from ‘The West Wing’ was bossing things at the White House – although maybe not so much ‘Veep’ star Selina Meyer as his vice president. For which of this ten-strong rogue's gallery would you cast your vote? Have your say in our TV politicians’ poll on the right. 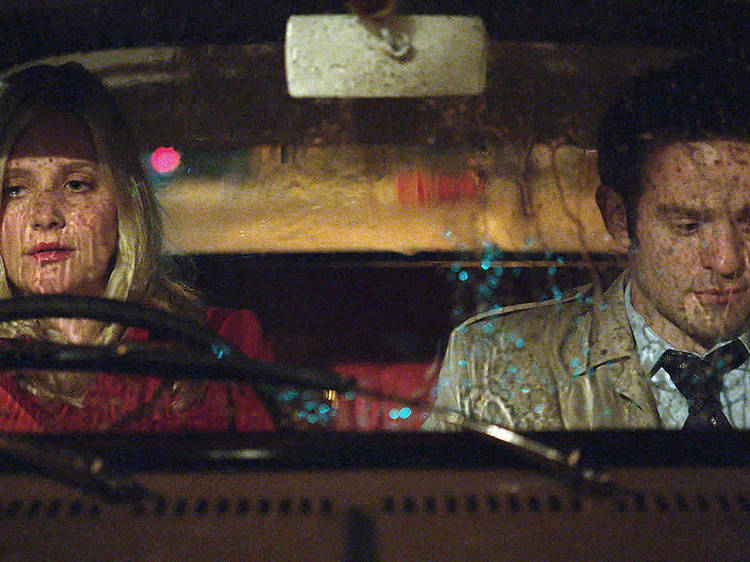 The star of ‘The Hour’ talks about her role in Paula Milne’s new drama ‘Legacy’, about two spies in love and adrift in a sea of ’70s East-West intrigue Watch ‘Legacy’ trailer Read ‘Legacy’ review Like most of Milne’s work it’s earnest to a fault, but also psychologically credible thanks to Cox and Garai’s expressive and committed performances. It also looks great: the permanent dusk of blackout 1974 is exploited to maximum effect. Read the full review What attracted you to playing a spy? ‘There’s a sense of failed possibility about both Anna and Charles [the two spies, played by Garai and Charles Thoroughgood], because of what their jobs have made them. Cold War pieces are an amazing way to talk about denial and people having to do things in secret. But normally, there just aren’t any women in those stories, so that attracted me too.’ There’s a sense of madness. No one knows who to trust. ‘There was no trust. Our government didn’t trust its own employees and no one trusted the government, so it’s a very cynical landscape. Anna knows her husband is cheating on her and it’s sort of acceptable because she’s used to a passionless existence. It’s got easier for her to live without love.’ Were you familiar with the history of the era in terms of three-day weeks, the blackouts and so on? ‘Not so familiar, but it was a fascinating time. The crux of the story is these Russian plots to utilise the strikes and unrest in Britain at the time. I found th 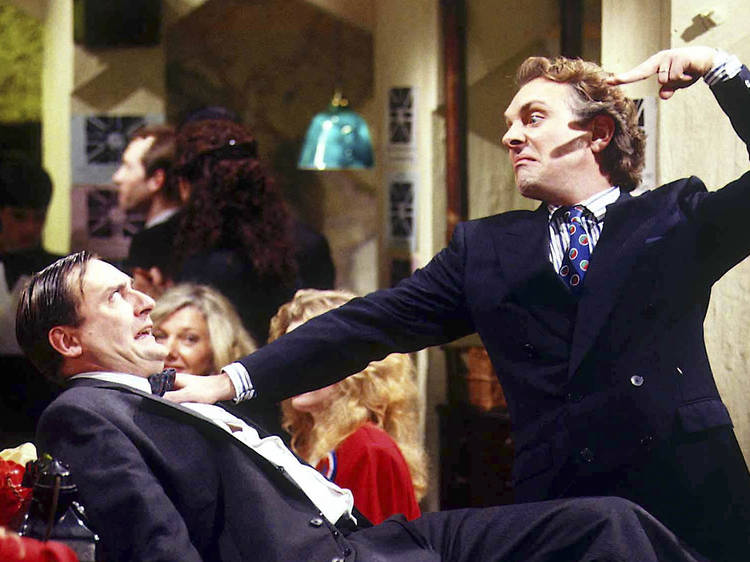 From pious presidents to devious MPs, television’s most memorable portrayals of people in power 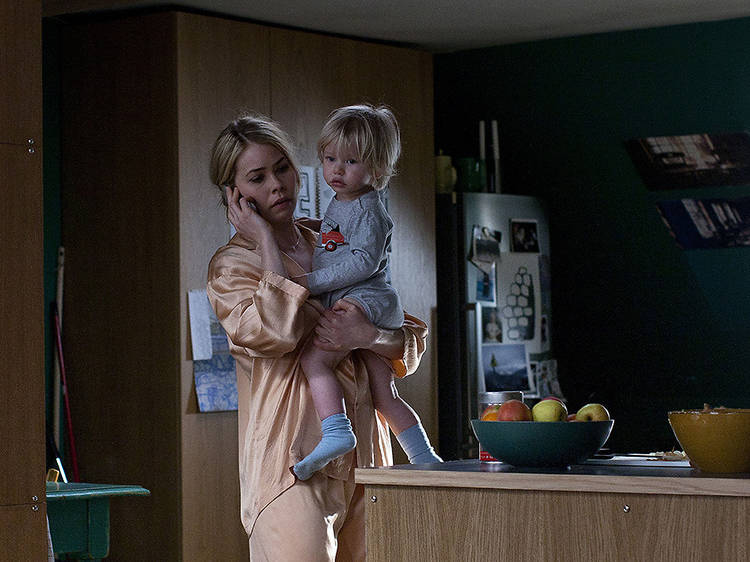 As Danish political thriller ‘Borgen’ enters its third and final series, Birgitte Hjort Sørensen – aka journalist Katrine Fønsmark – talks ambition and compromise What’s the secret of the international appeal of ‘Borgen’? ‘The whole political landscape has changed in recent years and everything is up for debate. We might have to find a slightly different way to put together our society. It’s a really interesting time. I feel like there’s more interest in politics [because of ‘Borgen’]. A lot of people still think politicians can’t be trusted – but at least they care. And because we show the private lives as well as professional ones, that seems to appeal to a lot of people.‘We’re very fortunate to be a part of the trend that “Wallander” and “The Killing” started. And in the UK, the fact that there are two strong female leads seems to resonate a lot here. Maybe in Denmark we’re a bit further ahead in terms of gender equality, especially where it comes to having children with maternity leave and childcare and so on.’ And what was the appeal of ‘Borgen’ for you? ‘After I did the first round of auditions, I was given the script of the first episode – usually they’re quite rough – but I gasped when I read it. My boyfriend went, “is it really shit?”, but it wasn’t – it was a page-turner. I’ve learnt a lot about acting, politics, journalism - and it’s taken me around the world, which has been amazing.’ If ‘Borgen’ is about maintaining principles whil 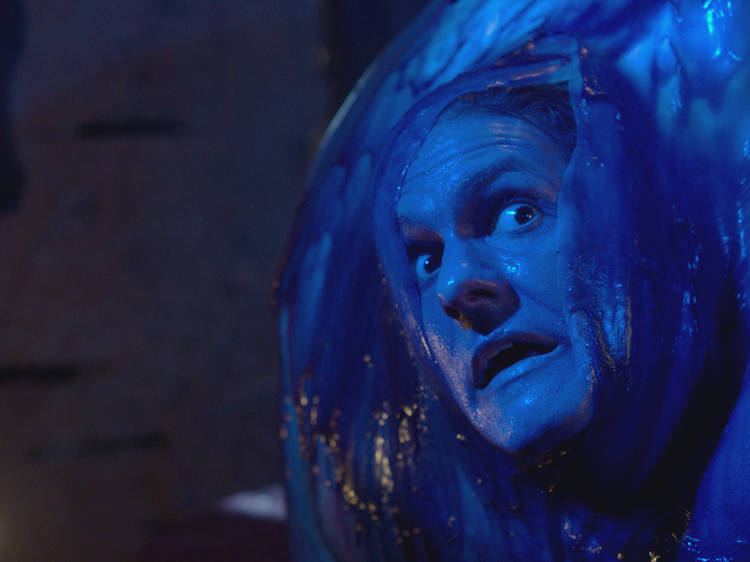 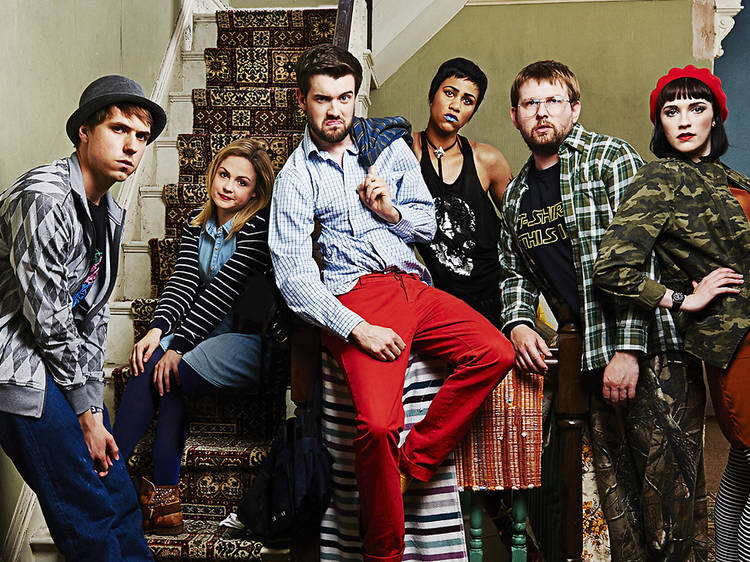 The college misfits face more domestic dilemmas – but could they cope if they shared a fridge in real life? 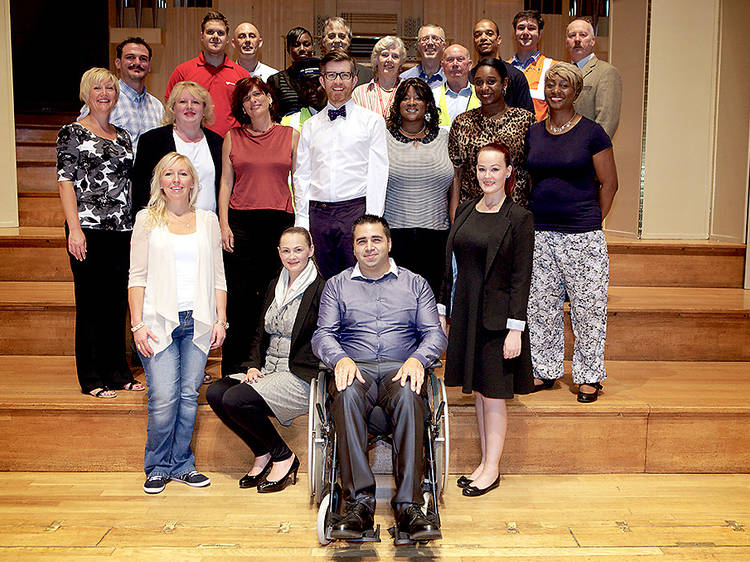 Preaching to ‘The Choir’

Gareth Malone will be teaching bankers to sing in a new series of ‘The Choir’. But what would happen if he took on some even trickier candidates for redemption? London estate agents Image Problem: No one likes a liar. Or a bully. Or a thief.Song solution: Madness – ‘Our House’.Outcome: It’s all going swimmingly until the estate agents suddenly disappear, before returning ten minutes later with the news that Sky1’s chorister-in-residence has made them a better offer. Malone matches it, the BBC is bankrupted overnight and Malone is hired by Sky1. Premier League footballers Image Problem: No one likes them. They don’t care.Song solution: Paul McCartney and Stevie Wonder – ‘Ebony and Ivory’.Outcome: John Terry isn't in the choir, but he turns up and barges his way to the front anyway. Rio Ferdinand’s reaction tests Malone’s good nature to breaking point. When Roy Hodgson turns up and tells a joke about space monkeys, it’s the last straw. Watch ‘The Choir: Sing While You Work’ trailer Bosses of energy companies Image Problem: A winter spent trying to decide between being hungry or being cold? Thanks guys.Song solution: John Lennon – ‘Imagine’.Outcome: The energy bosses can’t be arsed to turn up. Instead, they’ve hired Dame Kiri te Kanawa, Aretha Franklin, Bryn Terfel and the reanimated corpses of Luciano Pavarotti and Enrico Caruso to sing the song for them. The extortionately expensive quintet sound great – whether the energy bosses have learnt their lesson about the true valu 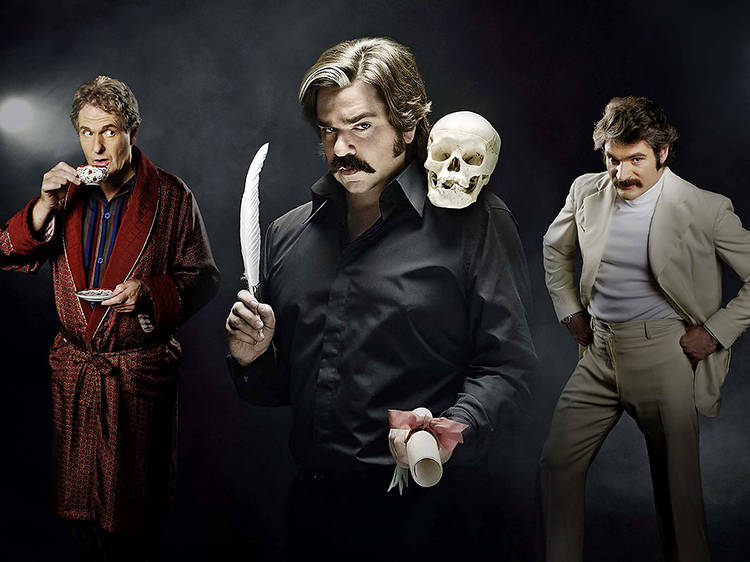 Steven Toast (star of C4 sitcom ‘Toast of London’) treats us to a few hazy anecdotes from his days as a novice on the razzle Watch the ‘Toast of London’ trailer The next seven days on TV Time Out's critics steer you through the TV listings guide with reviews of the best shows over the next seven days Today's TV highlights Strange Days: Cold War Britain ‘We've no real power - we’re just an American missile base…’ is how ‘Yes Minister’s’ Jim Hacker memorably described this country’s janitorial capacity on the global stage, circa 1980. This first episode of Dominic Sandbrook’s absorbing three-part documentary – screening as part of BBC2’s Cold War season – whisks us back to the ’40s to investigate how our geographical, political and cultural positioning made Britain a unique post-WWII battleground, and how this clash offered British people high hopes for a brighter tomorrow under the shadow of the bomb. Kicking off with Dynamo Moscow’s successful 1945 tour of the UK (drew with Chelsea, beat Arsenal), Sandbrook steers us through Britain’s complex relationship with East and West, setting the Cambridge spy ring, the beginnings of the Welfare State and Social Housing, and the visit of the Bolshoi Ballet against the backdrop of a British culture that was being simultaneously bombarded with Coca Cola, hamburgers and crazy swing music. As ever, Sandbrook is an impish, crafty guide through the wonderful archive footage and further episodes look set to bu 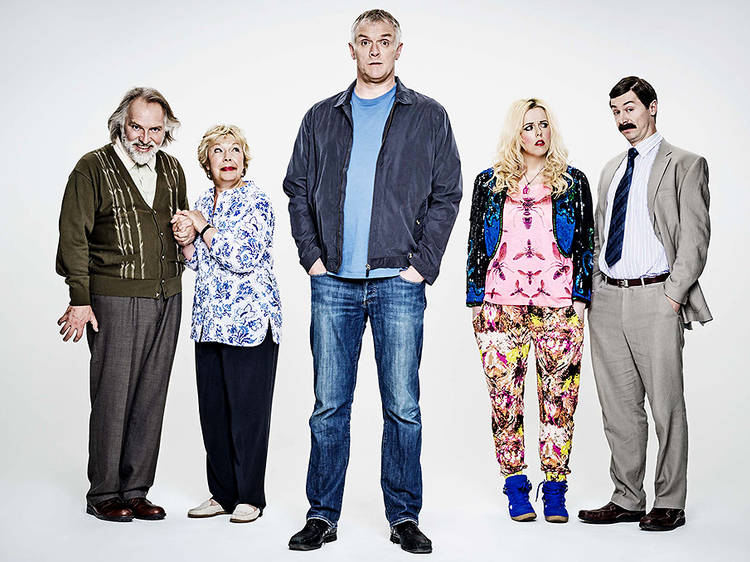 Greg Davies: how to hire your hero in five steps

Routinely described as 'a fat Rik Mayall', comedian-actor Greg Davies explains how he got his doppelgänger-hero into his new show – sitcom 'Man Down' Know 'The Young Ones' backwards 'All middle-aged people will tell you that there are no memories as vivid as those made as a child. Me and my misfit school friends (Sleepy Dick Baron, Farter Askley, Peter ‘Ten Eyelets’ Bellingham to name a few) had our minds blown by "The Young Ones". We had never seen anything like it and I remember running into school to recite dialogue and dangerously re-enact the violence (on Peter). This anarchic classic started my interest in comedy and we all agreed that the prince of its characters was Rik.' Read review of ‘Man Down’ Episode one Comedy writ large, from the initial fart joke to a pair of lost trousers and slapstick scenes so preposterous as to be surreal. Greg Davies is a newly dumped, middle-aged teacher living in a flat attached to the house of his mum and dad. Davies’s utterly silly but joyous classroom scenes could have you warming to this. Ageing ‘The Young Ones’ fans will love it. Meet him 'I met Rik for the first time over 20 years ago. I was a drama student and had performed a sketch at a hair extension show (no idea…). On our way back from dying on our arses, my friend Jed and I stopped to get a sandwich. In M&S, I went into my well-worn Rik impression and my friend started urgently nudging me and telling me to shut up. I ignored her only to turn round mid-impression and find Ri 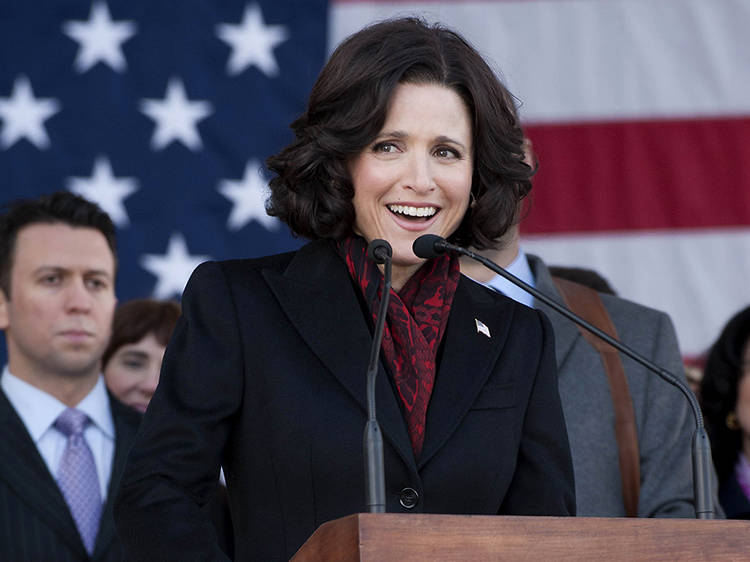 As scathing political satire 'Veep' returns, the show's bumbling vice president has a message for her British admirers 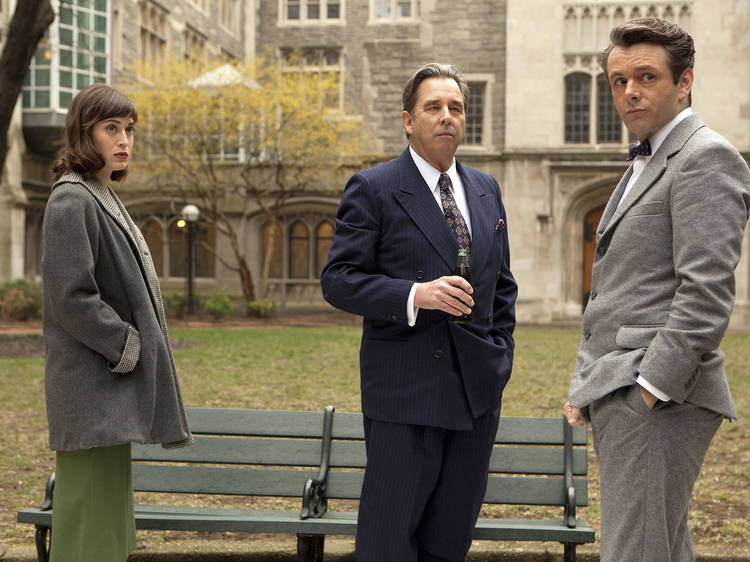 Michael Sheen on 'Masters of Sex'