Whether you’ve got family in town for the holidays, you need to book a teambuilding dinner or you haven’t made time for your friends in months, you’re going to need a restaurant that can feed a small army. Thankfully, some of L.A.’s best restaurants have you covered with family-style meals, weekly group dinners and little-known specials that should do the trick, no matter your craving. Here are the best spots to eat with a group, including a few options for dinner and a show.

Here’s where to dine with a crew 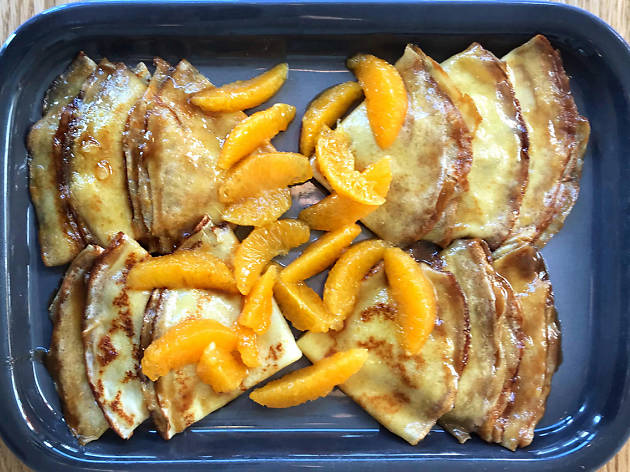 Dominique Ansel built a brunchers’ paradise. On weekends, there’s almost no better group-dining move than heading to the French (pastry) chef’s full-service restaurant at the Grove, where his kitchen fires up a dim-sum–inspired format of traditional and whimsical à la carte brunch treats. Servers display trays of smoked salmon, soft scrambled eggs, falling-apart-tender ham, fresh pastries and some of the best fried chicken in the city, and you get to mix and match to your table’s content. There’s something for everyone, plus the excitement of seeing the items before you decide—guaranteed to impress everyone, even that one tween cousin who hates everything. Brunch fills up fast, so it's best to reserve your spot (323-602-0096). 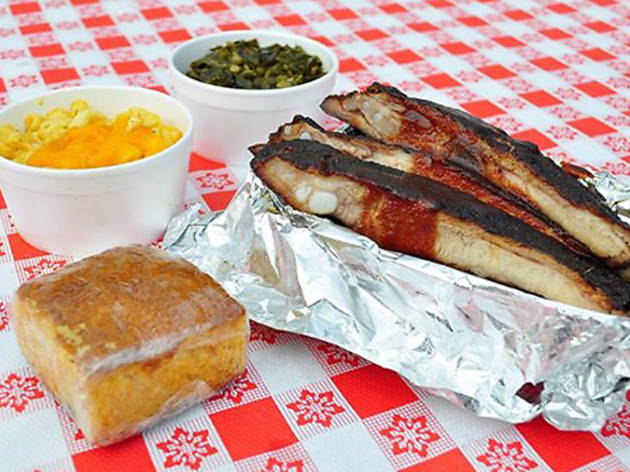 When Compton’s low-and-slow BBQ legend headed to La Brea, it brought its enormous trays of succulent, flavorful meats along for the ride. Now you can bring your crew to enjoy one at Bludso’s communal tables, and settle in for a sampling of some of the best BBQ in L.A. For a group of six or seven, there’s the Bludso’s Tray, which includes a half-pound of brisket, a half-pound of pulled pork, half a chicken, one full rack of pork ribs, a half-pound of rib tips, two Texas red-hot sausages and a half-pint of all sides, plus pickles, cornbread and BBQ sauce, all for $125. Of course if you’re really going big, we recommend the Party Tray, a massive feast with three times the amount of brisket and pulled pork, one and a half whole chickens, one and a half racks of pork ribs, one pound of rib tips, four sausages, three quarts of sides of your choosing, and pickles, cornbread and BBQ sauce, at $225 for the whole shebang, which should feed 10 to 12. Watch out for the meat sweats. 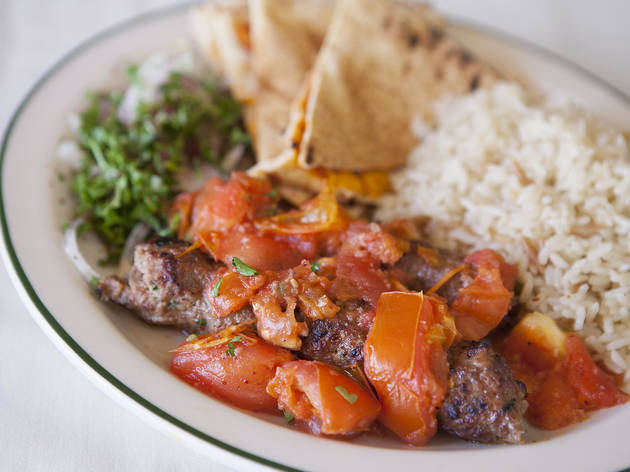 The Tcholakian family’s been serving Los Angeles its hearty dishes of comforting, fresh Lebanese cuisine since 1983—popular enough to expand its original Hollywood location to a second space in Glendale. It’s here that you’ll find “Entertainment Night” on Fridays and Saturdays, when plate after plate of kebabs, hummus, falafel, fatayer, tabbouleh, roast tomatoes, cabbage salad, rice pilaf and more hit the table for a family-style feast. If you’re with a group that likes dinner with a show, there’s also belly dancing and live music from 9:30pm to 1:30am, which makes this weekly event a great pick for hungry night owls. Cost runs $47 per person. 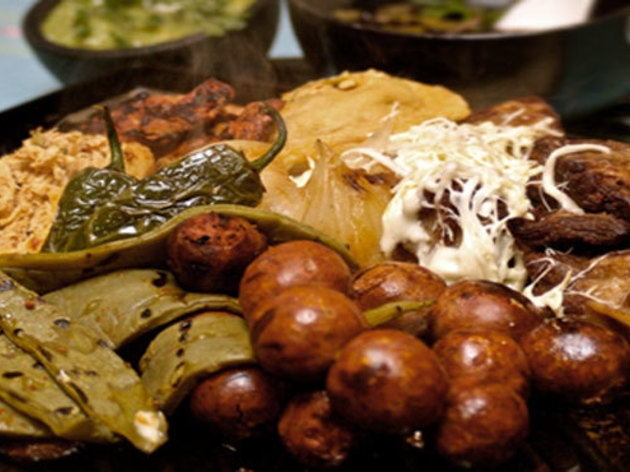 Every trip to Guelaguetza feels a little like you’re visiting family—the service is warm, the food is delicious and filling—so it makes sense that this James Beard Award-winning Oaxacan restaurant offers some of the city’s best family-style options. Menus range from two-person meals to eight, and can include an array of the restaurant’s lauded moles. The Festival de Moles, for instance, features mole negro, rojo, coloradito and Estofado with shredded chicken breast, rice and a large handmade tortilla, all at $29, while the Botana Oaxueña includes string cheese, memelas, chorizo, tasajo, cecina, chile relleno, carnitas, guacamole and black beans and serves eight (at $98). 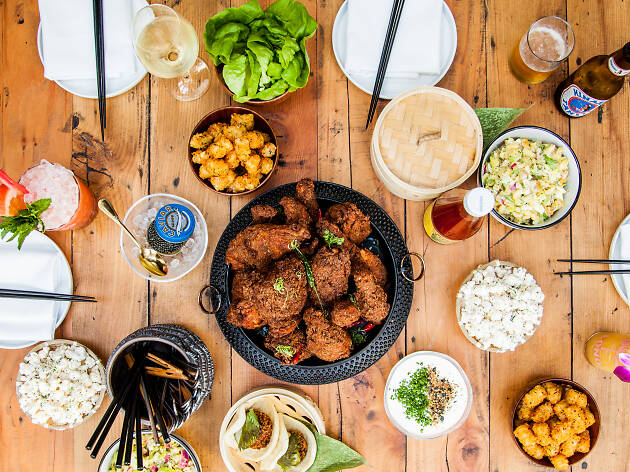 This palm-dotted tiki bar from Umbrella Hospitality Group draws in crowds looking for fun and fruity cocktails, but for those planning a dinner for four or more, there’s just as much fun to be had at a table as there is at the bar. If you order at least 48 hours in advance, you can snag one of the large-format, family-style “Lono Luaus,” which come complete with sides and all the accoutrements for a full-on feast. Choose options such as the live, salt-roasted Santa Barbara spot prawns with yakisoba, green papaya salad, spring rolls and musubi bowls; the pork belly, served two ways, with oxtail steamed buns, fried chicken, yakisoba and live-salt potatoes, and more. Call 323-848-4475 to reserve. 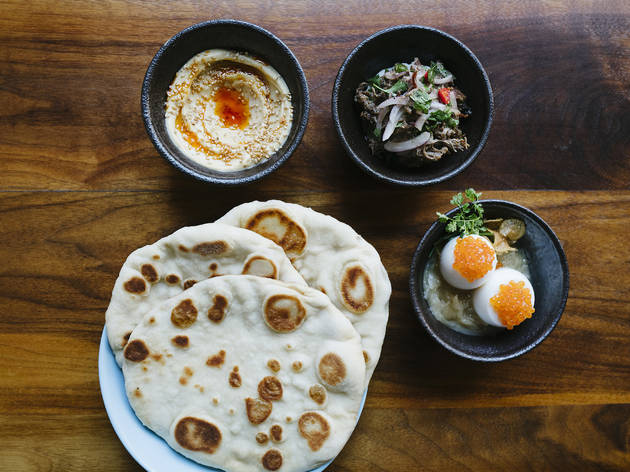 David Chang’s Majordomo features a sprawling menu, which means a playground for large parties. While there’s no set family-style meal, sharing is always the best way to dine here, and you should always begin with the bing: wheat flatbreads you can scale up or down depending on the toppings and dips your group may want ($6–$32). There’s also a section of the menu devoted to meat, which is where you’ll find multiple large-format plates perfect for splitting, whether you’re in the mood for Chang’s famous ssäm with kimchi fried rice ($225), or the Adam Perry Lang-style smoked rib, here served with beef rice, shiso and condiments ($190). 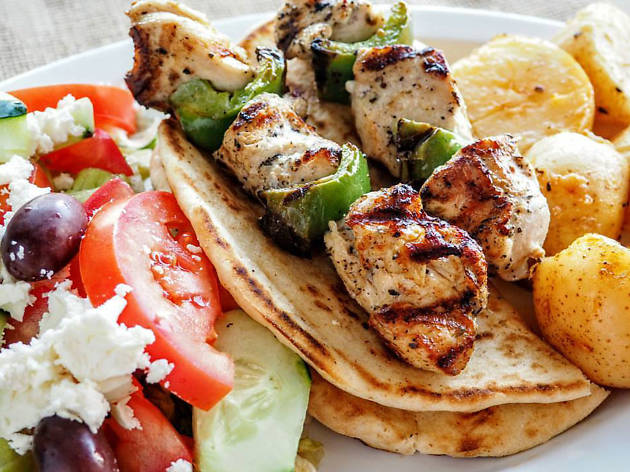 There’s a lot to love about Greek culture, and you can fall in love with multiple aspects every Thursday night. Once a week, Greek-food institution Papa Cristo’s offers a boisterous event—perfectly titled “My ’Big Fat Greek’ Family-Style Dinner”—which includes dishes like fried potatoes, keftas and more, plus wine tastings, and live entertainment such as belly dancing and bouzouki music. At only $25 per person it’s a total steal—so it’s incredibly popular. Reserve your seat by calling 323-737-2970. 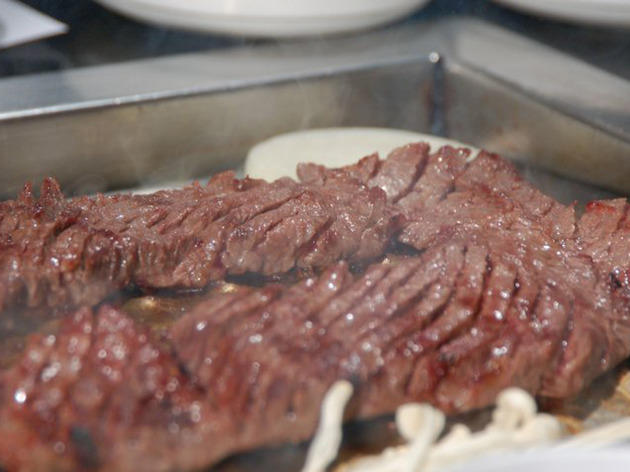 For those who love an interactive meal, look no further than Korean BBQ, where marinated beef, pork, seafood, chicken and vegetables cook on a grill before your very eyes. But Park’s isn’t your average KBBQ joint: Chef-owner Jenee Kim takes meat more seriously than most, serving prime and kobe-style beef in a setting that feels a bit more modern than nearly anywhere else in K-town. While you can dine solo or with two, it’s best to bring a larger party so that you can try a bit of everything: boneless wagyu short rib, seasoned pork belly, succulent house galbi, beef tripe and nearly anything else you can imagine. KBBQ fanatics swear by Park’s, so wait times can be lengthy; best to make a reservation by calling 213-380-1717. 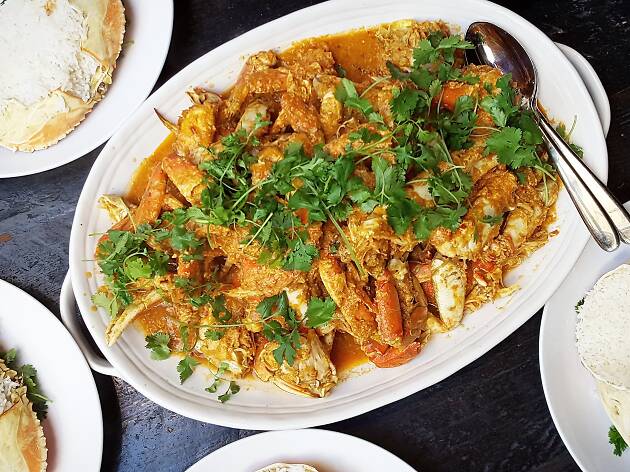 Andrew Kirschner’s Tar & Roses has been a Santa Monica staple for seven-or-so years, but somehow, the Tar & Roses Suppers series is still flying under the radar. Sure, you’ve got to order the dinner at least seven days in advance, but think of it as a meal to look forward to: Each three-course prix-fixe serves at least four guests, and includes dishes not on the restaurant’s regular menu. Dig into wood-fired goat with Moroccan accompaniments; a platter of Singaporean chili crab curry with jasmine rice (pictured); the standing rib rack with traditional BBQ sides; or the paella, served with eggplant and romesco—all for between $46 and $62 per person. Call 310-587-0700 or email info@tarandroses.com to reserve. 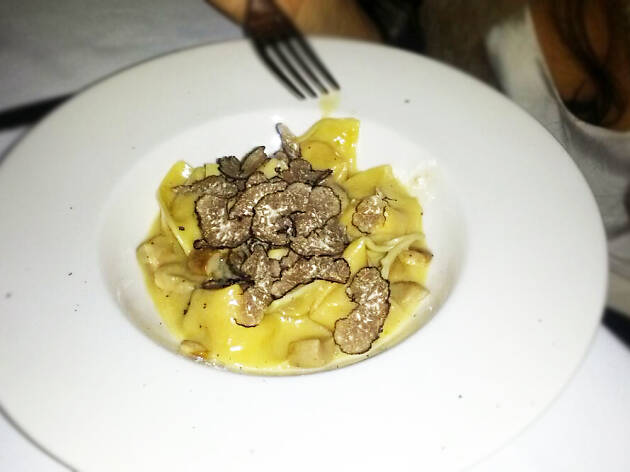 Looking for the best bet in Brentwood? Every night, trattoria stalwart Vincenti offers a family-style, three-course meal for a minimum of two guests. At $50 per person, the for-the-table prix-fixe could start with an appetizer of roasted beets with burrata and a white balsamic dressing, then move on to handmade gnocchi with burrata, ricotta, zucchini flowers and black truffles, and finish with a Jidori-chicken stew. (And if you go on a Monday night—pizza night—then you might as well order a pizza for the table, too.)