Check out these studio tours in L.A. for a behind-the-scenes look at how movies and TV shows come to life

Embark on a studio tour and you’ll discover what Angelenos already know: (Almost) everything is filmed in L.A. That quiet East Coast cul-de-sac? A fake residential block at Universal Studios. That New York cityscape? The backlot at Warner Bros. Studios. An elaborate sci-fi ship? That would be a soundstage at Sony Pictures Studios. When L.A.’s beaches, scenic hillsides and aesthetically diverse neighborhoods can’t quite cut it, productions set up shop at one of the city’s studios—and some of the biggest ones have opened their gates for tours. From Culver City to Hollywood, take a peek behind the soundstage doors with these studio tours in Los Angeles.

Go behind the scenes on these studio tours in L.A. 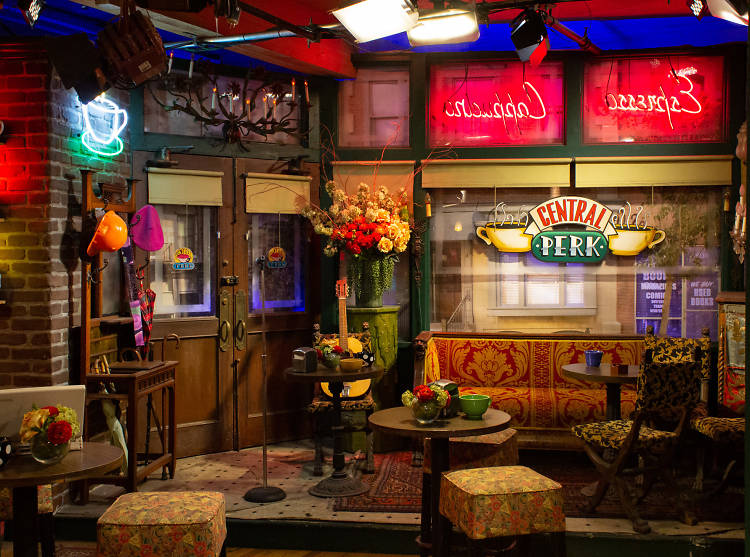 Warner Bros.’ guided tram tour zips through the studio’s sizeable footprint—110 acres on the Valley-side of the Hollywood Hills—with about a dozen other passengers onboard. It’s an encyclopedic tour of all types of filming locations, with a journey through the backlot’s city stand-ins and Gilmore Girls-starring residential square, as well as a stops inside a soundstage and at a few museum-caliber displays of props. Though you’ll spend some time simply navigating the sprawling grid of soundstages, you’ll also stop and venture on foot with memorable photo ops: a seat on the couch at Friends’ Central Perk or The Big Bang Theory’s Apartment 4A, an opportunity to mount a Harry Potter broomstick and the chance to come face to face with almost every Batmobile imaginable.

You won’t find anywhere else: A dedicated studio museum, and by far the most to see on any studio tour. 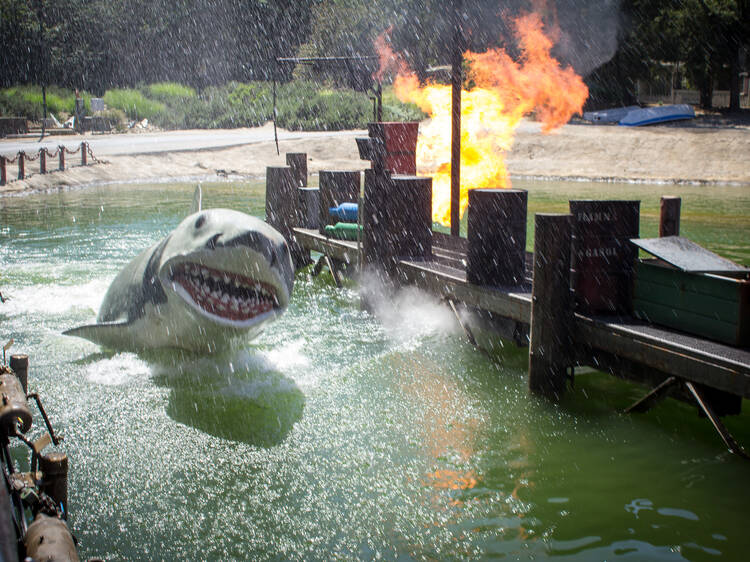 While Universal Studios’ tram tour is technically an amusement park attraction—which means you’ll have to stomach the hefty price of admission—it manages to combine the look of a living, working studio with entertaining theme park polish. The tour mixes live narration and pre-recorded bits as you cart through backlot sets of New York, a mutt of European villages, the Old West and familiar movie landmarks—most impressively the 747 crash site from War of the Worlds. The majority of live filming is securely tucked away—and if it’s not, expect portions of the backlot to be chopped off of your experience—but Universal compensates with preplanned encounters that mimic special effects: a wet and fiery earthquake simulation, a sudden flash flood and that delightfully rubbery, toothy grin on the face of Bruce—a.k.a. Jaws. While the 3-D motion simulation that replaced the iconically campy (and burned down) King Kong section is a welcome technical upgrade, the tunnel lacks the same immersion and charm of the original—the same can sadly be said for the similarly dizzying and ill-executed Fast & Furious: Supercharged segment.

For fans of: Psycho, The Fast and the Furious, all things Steven Spielberg

You won’t find anywhere else: Rubber sharks, CGI gorillas and plenty of pyro. 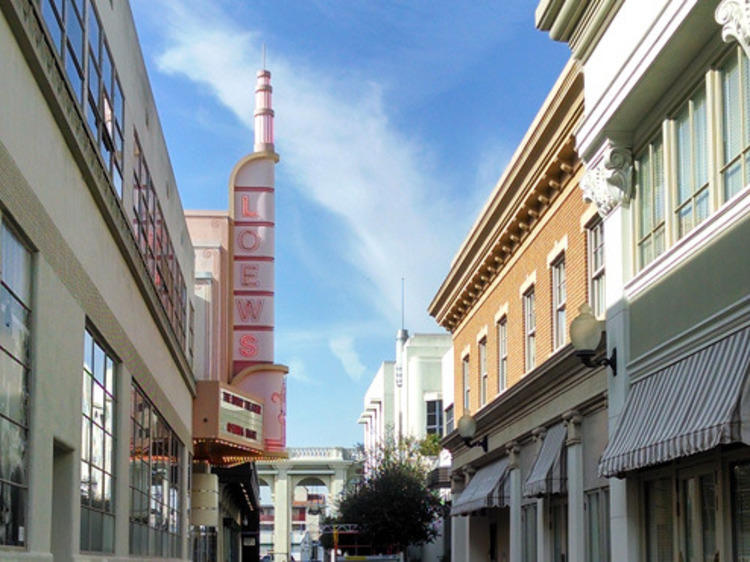 As you pass through the studio gates on this walking tour, you’re immediately greeted by Tony Tasset’s arching Rainbow sculpture—a nod to the studio’s past as the home of The Wizard of Oz. The lot’s footprint has been significantly downsized since then, when it was known as the iconic MGM Studios; virtually all of its colorful backlot sets are now gone with the wind. But the magnolia tree-lined sidewalks and clean, white Art Deco facades provide a pleasant ambience that the other industrial-edged studios lack. A leisurely pace allows time to peer through the elephant doors of a soundstage and look out for passing celebrities. The tour skews toward contemporary productions—the bullet-riddled RV from Breaking Bad, a stock car from Talladega Nights and a stop in the studios for Jeopardy or Wheel of Fortune—but there are still plenty of small moments where that old moviemaking charm endures.

For fans of: The Wizard of Oz, Singin’ in the Rain, Ben-Hur, Spiderman, Breaking Bad, Talladega Nights, Jeopardy, Wheel of Fortune

You won’t find anywhere else: The acoustic bliss during a stop in a foley studio. 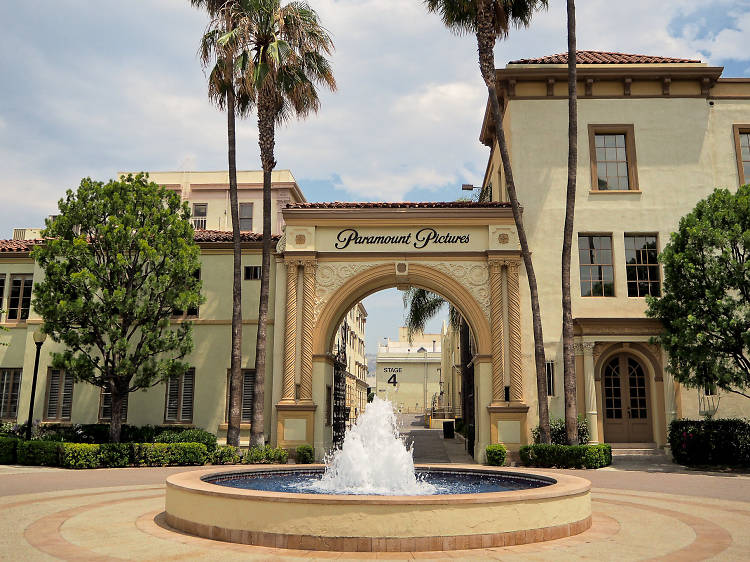 Believe it or not, Paramount is the last major studio to keep its headquarters located in Hollywood—and the only one there to open its doors to the public. Inside the famous wrought iron gate, you’ll be treated to a guided tram tour through the prop house and a sizable New York backlot. Of particular note, there’s the open-air Blue Sky Tank, which holds almost one million gallons of water to film anything from surfing scenes to maritime disasters.

For fans of: This Is Us, Grace and Frankie, Dr. Phil

You won’t find anywhere else: A seasonal after-dark tour that takes a macabre walk through moviemaking history and the neighboring Hollywood Forever Cemetery. 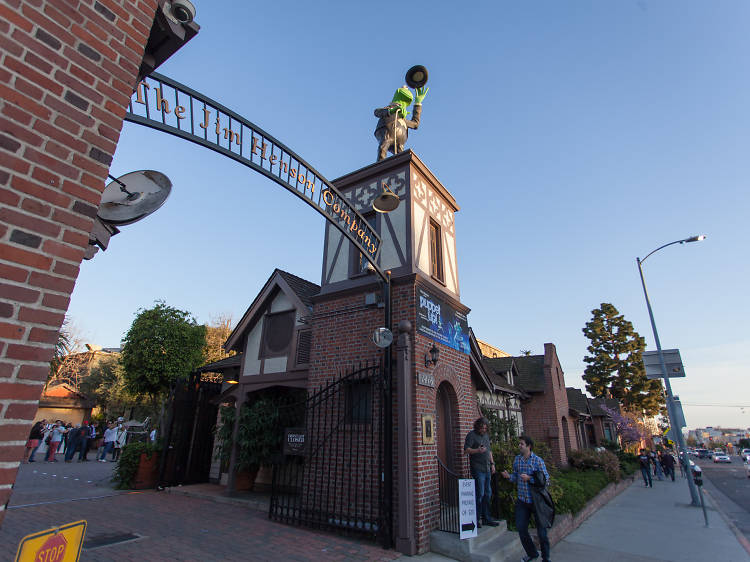 What can’t you see?

Some of the biggest and most exciting studios are open to public tours, but you may be scratching your head at some big name omissions. CBS Television City (which has been solf for future redevlopment) technically doesn’t offer tours, but there are tons of TV shows that film there everyday for which you can secure tickets. NBC’s famous Burbank studio tour was discontinued in 2012 after most of its productions had migrated to Universal City—notable holdout The Tonight Show fled the lot for New York in 2014. Sunset Gower and Sunset Bronson (the locations of the original Warner Brothers and Columbia studios, respectively) are closed to the public, but you can get a fantastic oral history from the Felix in Hollywood Tour. Similarly, Siren Studios, L.A. Center Studios, the Jim Henson Company Lot and the 20th Century Fox Studios are for serious business only, though all have been known to host the occasional public-facing event. And not to stomp all over your childhood dreams, but unless you know an employee, don’t plan on getting inside the gates at the Walt Disney Studios or Nickelodeon’s Burbank animation studio.