It’s easy to forget you’re still in Los Angeles as you trek through the mix of native chaparral and landscaped paths that cover Griffith Park. Where else could you encounter canyons, caves and coyotes in the middle of a city? Griffith is a point of pride for Angelenos, a park to rival all others. Its 4,310 rugged acres harbor hikes and trails, museums and picnic areas, and even a bit of haunted history. Whether you’re visiting L.A. for the first time or simply looking for something new to explore, find everything you need to know with our guide to Griffith Park.

Where to go in Griffith Park 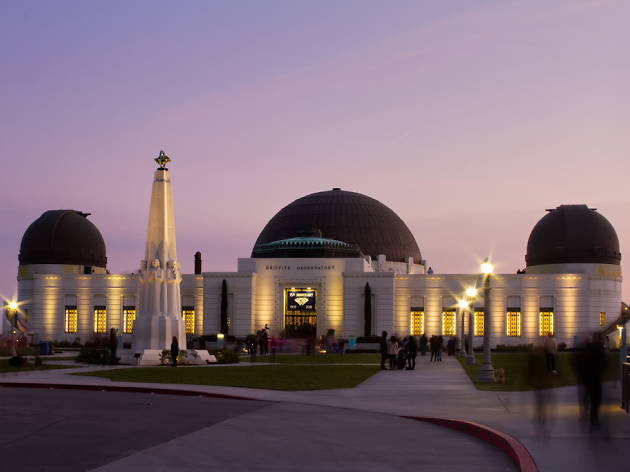 Vermont Avenue is the grand entrance to the park for most visitors; it’s by far the most popular route up to the Griffith Observatory and carries cars to the Greek Theatre. You’ll find a nexus of trails as you climb up the hill, as well as the nine-hole Roosevelt Municipal Golf Course and its neighboring tennis courts.

Vermont Avenue intersects with Los Feliz Boulevard on the southern edge of the park in Los Feliz. 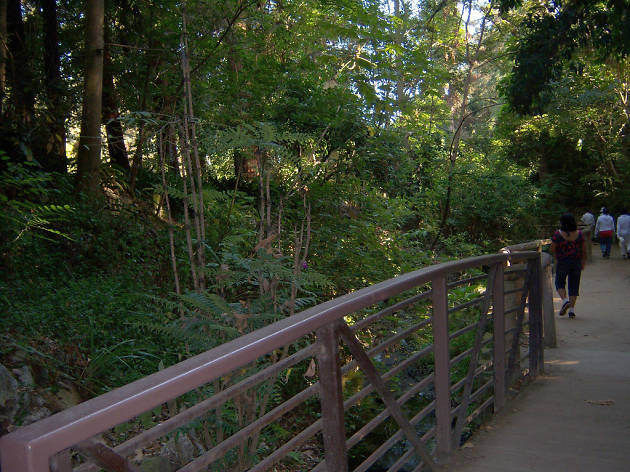 This evergreen-lined street sneaks between residential areas as it climbs toward the Observatory and a number of trailheads. Back on lower ground, the dell is an oasis of shade and rustic charm. You won’t find much water running through the creek here, but its walking paths and bridges are still lovely—as is the Trails Cafe across the street.

Fern Dell Drive interescts with Los Feliz Boulevard on the southwest corner of the park in Los Feliz. 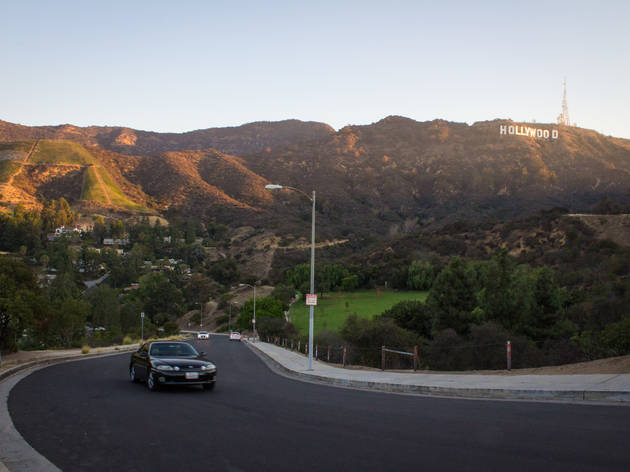 Though largely residential, both canyon roads terminate inside the western edge of the park. Take Canyon Drive through Bronson Canyon and you’ll come across a few trailheads, including one to the Bronson Caves. Beachwood Drive, meanwhile, provides access to both Sunset Ranch (for horseback riding excursions) and Lake Hollywood Park (for close-ups of the Hollywood Sign).

Beachwood Drive and Canyon Drive intersect with Franklin Avenue southwest of the park, near the 101. 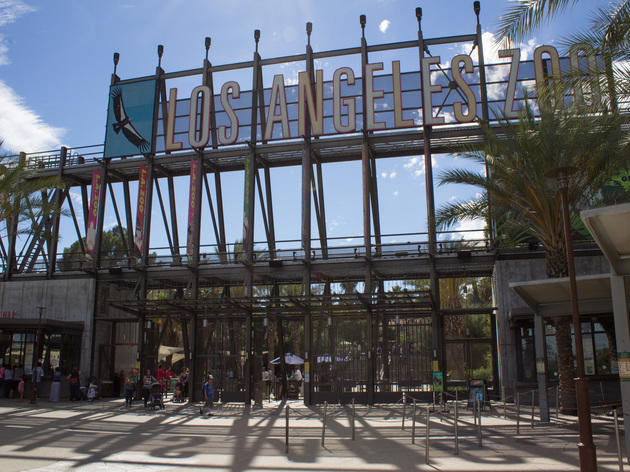 The main attraction on the eastern edge of the park is the L.A. Zoo, along with its cowboy museum neighbor, the Autry. By far the biggest tenants, though, are the public 18-hole Wilson and Harding Golf Courses (as well as the small, par 3 Los Feliz Course across the river). You’ll find picnic areas and sports facilities to the south, as well as a bit of history at the merry-go-round and Old Zoo.

Crystal Springs Drive runs along the eastern edge of the park, parallel to the 5. 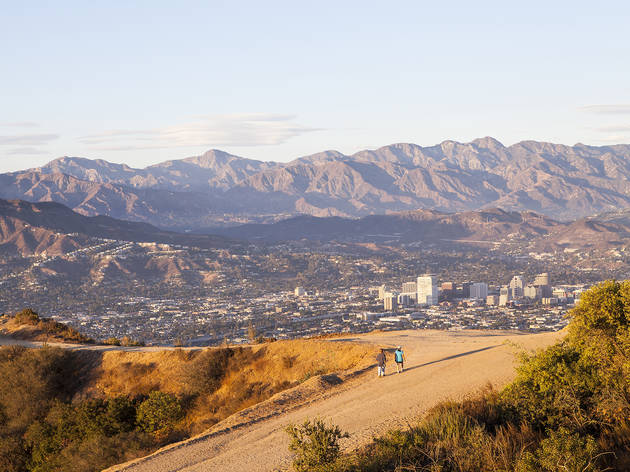 The Valley side of the park feels more open and a little less wooded than the Basin side. You can hit the horse trails with a stop at the Equestrian Center, or explore the history of trains at Travel Town and Walt’s Barn. The barren Mineral Wells area is the largest landmark here, with a shaded picnic area and playground below as well as the lovely Amir’s Garden above.

Zoo Drive runs along the northeast corner of the park, parallel to the 134, with access to the above landmarks. 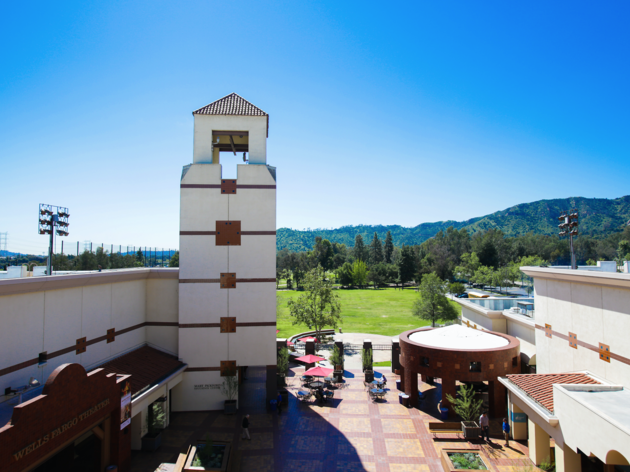 Located in the northeast corner of the park, this museum explores the history of the American West. Learn about Native Americans and cowboys and then check out their Crossroads West Café, research library and store. Keep an eye on their calendar since this museum also doubles as a venue for film screenings, lectures, music, and other events. 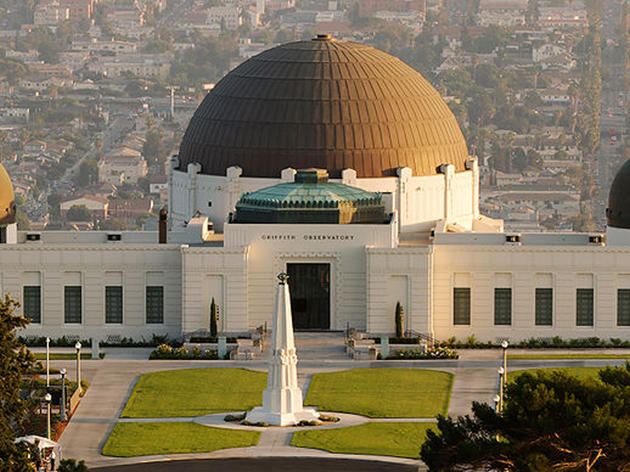 “If every person could look through that telescope,” declared Griffith J. Griffith, “it would revolutionize the world.” More than 80 years after this iconic building opened, the world remains unrevolutionized, but the vista is no less stunning, particularly at night when Los Angeles twinkles below. Inside you’ll find a bevy of exhibits, including a Foucault pendulum, Tesla coil and planetarium show. Give yourself plenty of time before the 10pm closing to gaze through the 12-inch refracting telescope on the roof, otherwise you can look through the far less crowded modern, reflecting telescope on the front lawn. 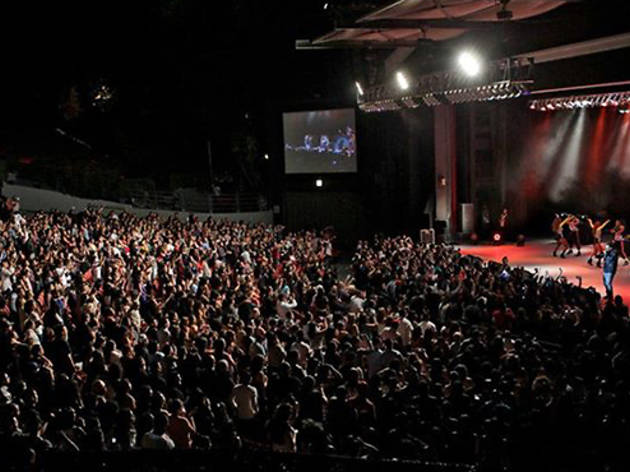 This pleasant, open-air, 6,000-seat theatre stages big summer shows by acts both national and local. It’s a bit like seeing a concert in the woods, and rivals the Hollywood Bowl in terms of LA’s most magical outdoor music venue. The only downside: The "stacked" parking means getting out of the parking lot often takes longer than the show, and VIP “Quick Parking” is a pricey $75. 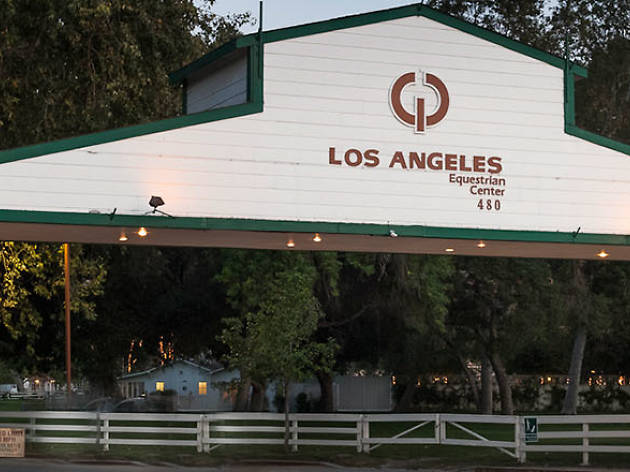 This extension of Griffith Park, just over the Burbank side of the river, serves as the equestrian epicenter of the city. You’ll find a hoard of horse-centric businesses here, including boarding and training facilities, as well as horse rentals and trail rides ($25 per hour). Of course, since this is Los Angeles, the facility also doubles as a banquet hall and popular filming location.

The L.A. Zoo’s greatest asset is its location, in the isolated hills of Griffith Park. It’s a pretty popular place, but the zoo’s size—80 acres, plus a huge parking lot—means that, like the park itself, it rarely feels busy. If you want to visit, it’s worth bearing in mind that some of the larger animals may seek shady refuge from the extreme heat on warm summer days, and by no means will all of them be visible. 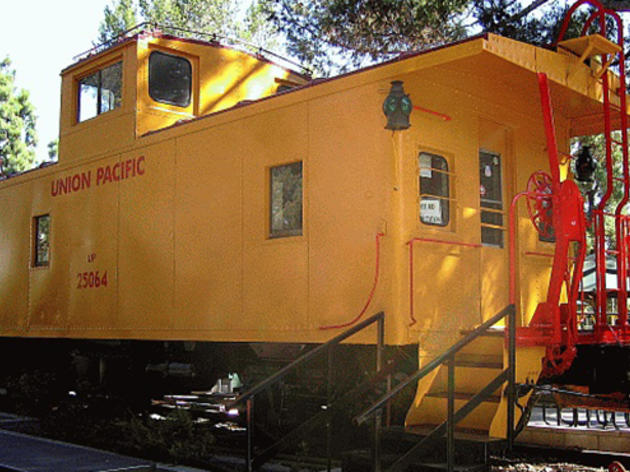 The northwest corner of Griffith Park is the destination for train enthusiasts and curious kids. Travel Town, open all week, is a “railroad petting zoo” full of historic rail stock like an 1880 Southern Pacific locomotive and an 1881 Union Pacific caboose; the museum also expertly explains how the railroads helped build Southern California. Lovers of things that go choo-choo should be sure to visit the park on a Sunday, when the neighboring Los Angeles Live Steamers section is open for railheads.

Where to eat and drink near Griffith Park 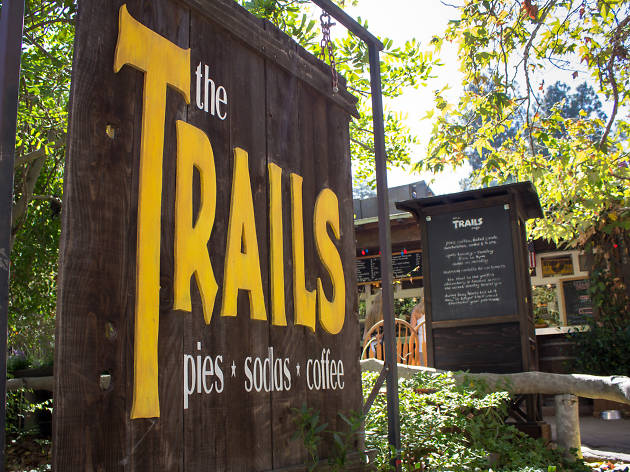 This wholesome Griffith Park cafe serves up sandwiches, sodas and pie on a shaded patio and picnic area overlooking the lovely Fern Dell section of the park. 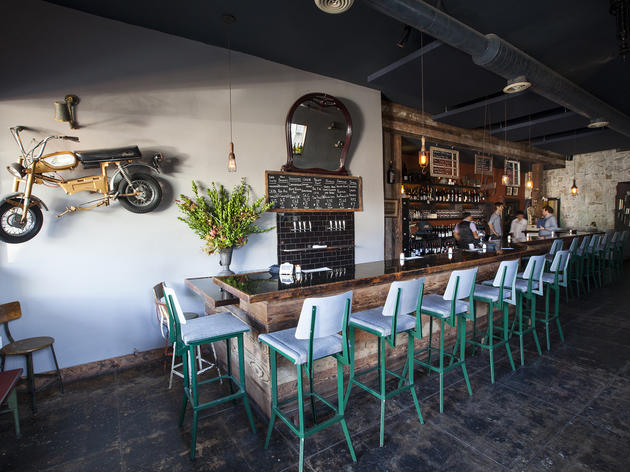 Discover a world of wine that you didn’t know existed while honing your taste preference. Once the bar fills up, and it does, candles and dim Edison bulbs illuminate a well-dressed neighborhood crowd of food and wine buffs. 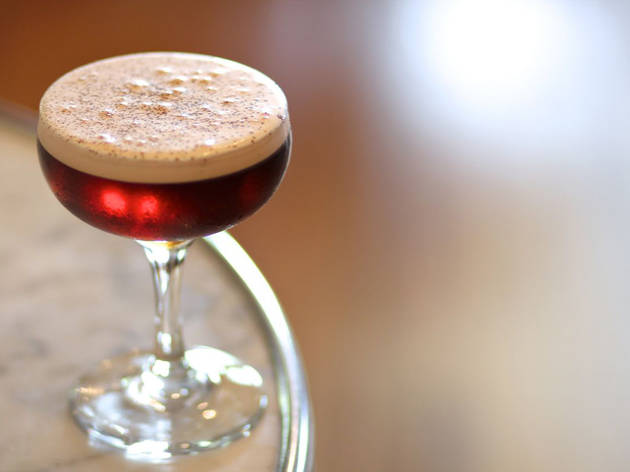 Tucked into a small corner of Alcove Café and Bakery, a favorite lunch and dinner spot for Los Feliz locals, Big Bar is a slice of craft cocktail paradise that’s seen a recent menu upgrade. 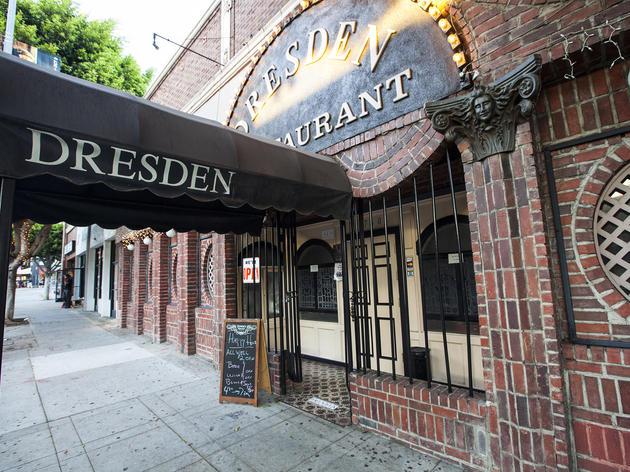 Retrace key scenes from Swingers and you’ll end up here, settled in for an evening with inimitable musical duo Marty & Elayne. A beacon of genuine, unironic kitsch, nothing has changed here in umpteen years, from the corkboard walls to the wrought-iron lighting fixtures. 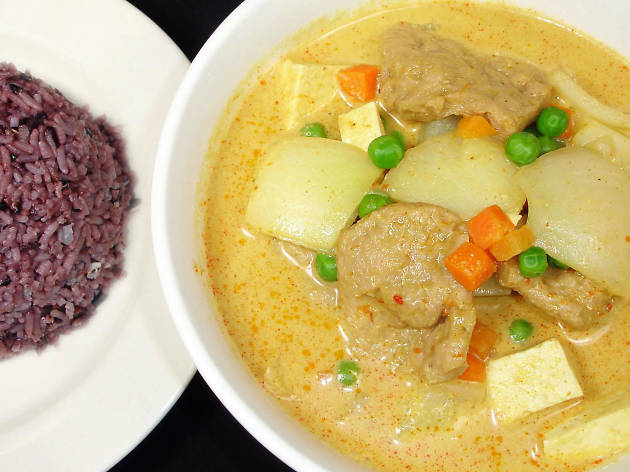 With a menu bordering on the triple digits, Green Leaves Vegan has enough dishes to satisfy both vegans and non-vegans alike. The clean, open space draws families and friends in throughout the day—stop by for breakfast, when they’re known for cooking up their famous (and huge!) pancakes. 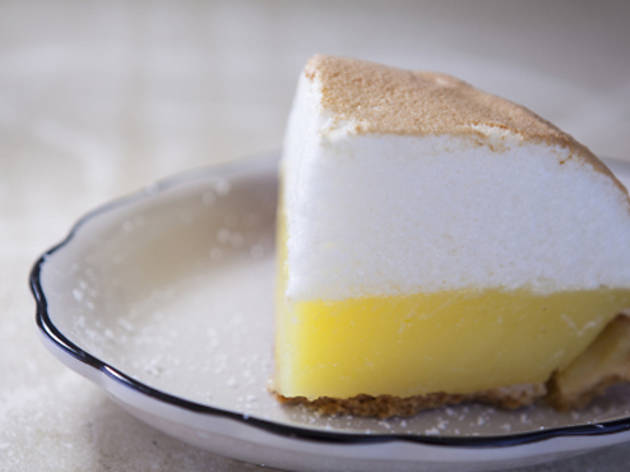 Off the beaten path in Griffith Park 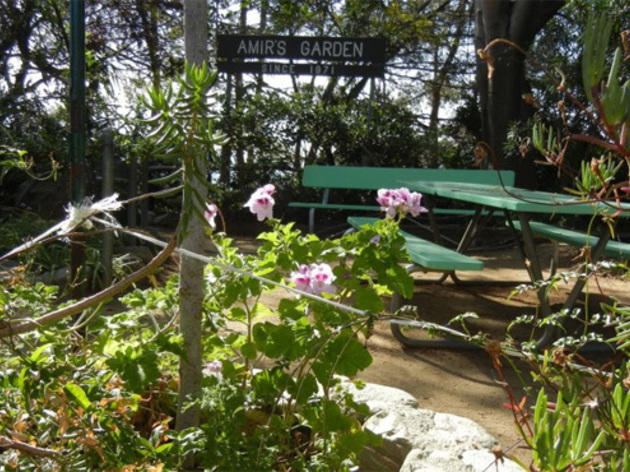 In 1971, hiker Amir Dialameh singlehandedly nurtured a scorched hillside in Griffith Park into a shaded retreat. Four decades later, this five-acre, volunteer-run garden remains a favorite rest stop for hikers and equestrians alike. Getting here is the difficult part: It’s about a half-mile walk uphill from the trailhead at Mineral Wells Road and Griffith Park Drive. But the payoff is sweet once you’ve found a seat on the hilltop picnic benches, among a patchwork of flower beds. 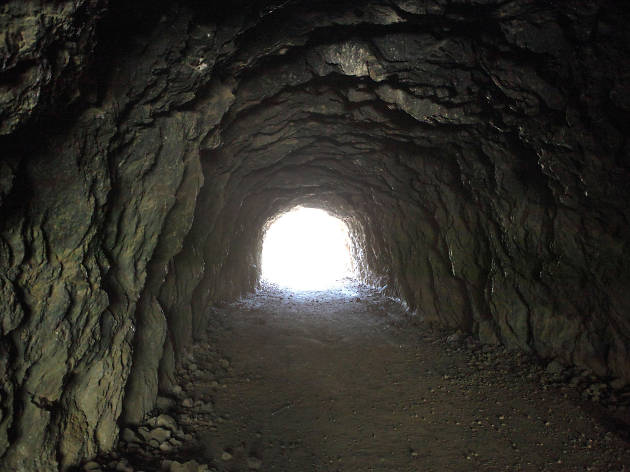 Holy man-made caves, Batman! When a quarry here ceased operation in the late ’20s, it left behind a rocky hole that soon became a go-to for Hollywood film shoots—in particular as the entrance to the Batcave in the ’60s Batman series. From Franklin Avenue, head north on Canyon Drive for 1.2 miles and you’ll find a gravel parking lot on the right; there’s also a larger paved lot just up the road. The trailhead sits between the two; from there it’s only a quarter-mile walk to the cave. 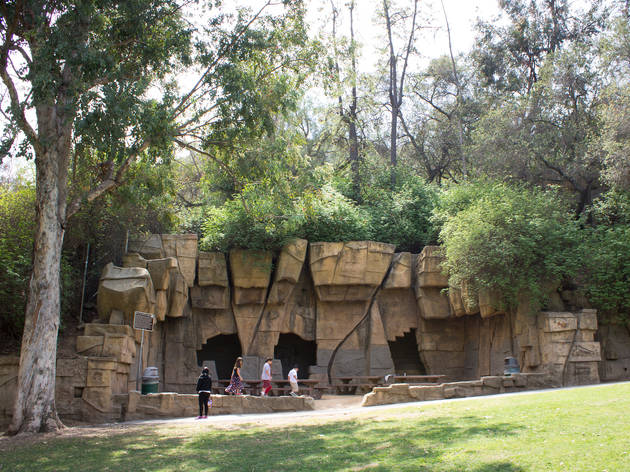 The iron bars and rock enclosures left behind at this picnic area once formed the building blocks of the Griffith Park Zoo. After a half-century in operation, the complex shut down when the LA Zoo opened in 1966. Many of the structures still stand, with unlocked animal enclosures lining this hilly field on the eastern edge of Griffith Park. It’s an odd setting, with a mix of abandoned structures, reclaimed nature, pervasive graffiti and the lingering sense of animal opression. But there’s beauty here, too: The main trail winds up into the hills, which, when we’re blessed with the miracle of rain, becomes lined with overgrown, vibrantly green grass. 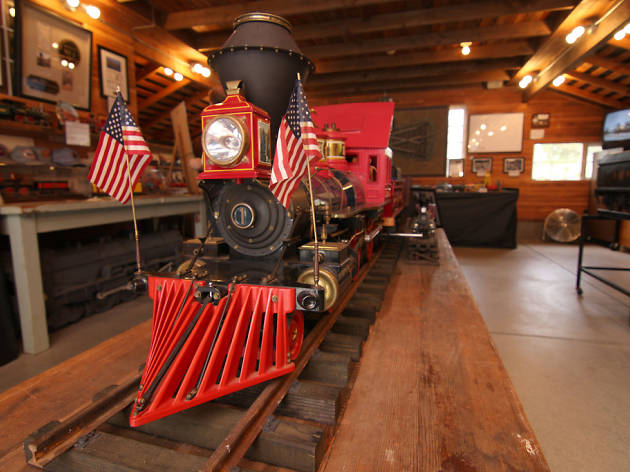 Walt Disney used to ride his own 1/8th scale live-steam railroad—the "Carolwood Pacific Railroad"—around his home in the Holmby Hills until he shifted his focus to a much bigger project: Disneyland. Though Walt and his private railroad have since passed, in 1999 the red barn that he used as his workshop was moved to Griffith Park’s Los Angeles Live Steamers Railroad Museum. Every third Sunday of the month, you can visit the barn to find a collection of train models and memorabilia. Free parking is available in the lot off Zoo Drive.