The Hilton's latest iteration is a grand step back in time

Housed in the old Italian Romanesque bones of Melbourne’s heritage-listed Equity Chambers, Hilton Melbourne Little Queen Street has a 16-level tower attached to its hip boasting views of nearby law firms and the Supreme Court to guests who stay.

In the heritage wing, rooms are adorned in natural wood panelling and give off the same dark features and academic grandeur of the State Library. It should then come as no surprise that leading Australian architecture studio Bates Smart (which designed the State Library, among others) took charge and restored the venue.

Carpets match the original tiling of the venue, while grand, white pillars hold the structure together. There are also a few subtle references that nod to the space’s history.

Old barrister’s offices are preserved in time with gold lettering brandishing the names of since-passed officials on glass doors, and meeting rooms now take their place. It’s like visiting the set of a show like Mad Men. A gym lays dormant on-site, ready for executives to make the most of it, and the bespoke rooftop space will be utilised for events in future.

Signature Hilton beds promise a good night’s sleep and the hotel is better suited to those on a work trip rather than those celebrating a milestone event. Or, better yet, for those seeking sanctuary in their own city as it’s a pretty sweet staycation spot in the middle of the city.

When we visited, there were times when the hotel appeared to be like a scene out of a Stephen King novel, not owing to any gore or horror, but the ghostly nature of a near-empty hotel with a skeleton team of staff floating throughout the venue. That being said, it is nice to have your every beck and call answered.

The restaurant in the grand hall, Luci, is helmed by head chef Sam Moore (Pier Rose Bay, Becasse, No.35 at Sofitel Melbourne) and promises Italian-inspired dishes in a setting not dissimilar to a colonial, Great Gatsby-esque hotel you might spot overseas. There’s nothing quite like this in Melbourne.

The Douglas Club is the resident bar that offers an extensive drinks list focussed on cocktails, complete with theatrics like orange rinds lit on fire for a Negroni, or its signature Breakfast Pina Colada featuring ground cinnamon set ablaze mid-air before promptly landing into a creamy, fruit-forward abyss.

Valet parking commandeered by staff adorned in bellboy caps and vests adds to the bygone era of the experience. A giant, colourful and painstakingly hand-painted mural by Kitt Bennett is splashed across the opposing wall of the building portraying quintessential Melbourne (think bikes and coffee).

Attention to detail is the name of the game at the Hilton’s latest instalment, and we think it’s off to a very promising start. 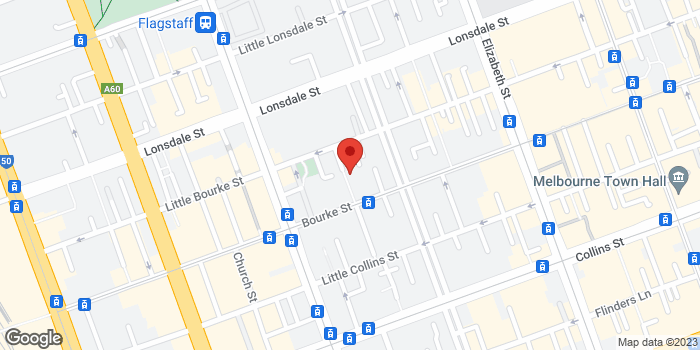 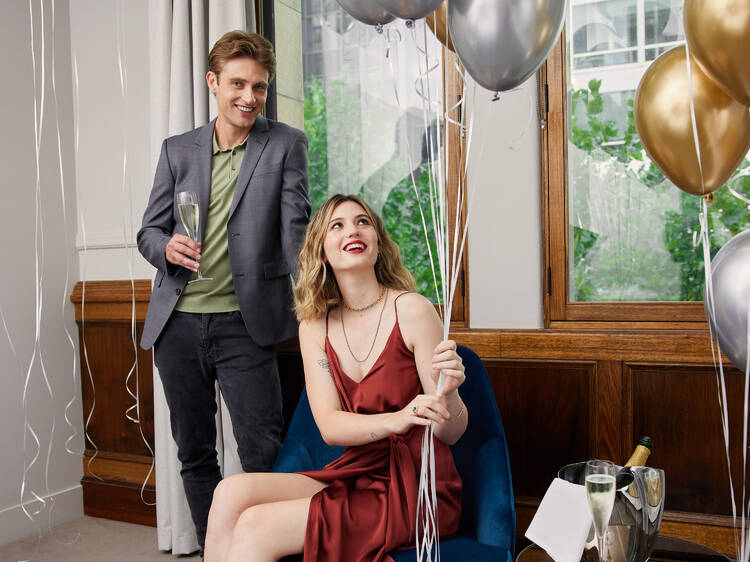 The Hilton Melbourne Little Queen Street opened its doors to guests in March 2021, having taken over the old Italian Romanesque bones of Melbourne's heritage-listed Equity Chambers. The boutique hotel is a gorgeous blend of old and new, with lofty ceilings, old barrister's offices laden with gold detailing and dark natural wood panelling that's reminiscent of the State Library. Stepping inside is like going back in time, and in celebration of the hotel's one-year anniversary, you're invited to experience the lavish Celebrations Stay Package.  When you check into your stylish guest room, you'll find a complimentary bottle of sparkling wine by Mornington Peninsula's Quealy Winemakers, a box of chocolates by local bean-to-bar chocolatier Atypic Chocolate, coffee by Cacao Chocolate and bathroom amenities by Hunter Lab. Settle in, crack open that bottle and munch on those chocolates before sinking into your plush bed. If that didn't sound lavish enough, you'll also receive a $50 celebration credit that you can use to upgrade your stay. There are several ways that you can use it, including amenity upgrades like a pampering kit by Hunter Lab, tickets to the NGV's current exhibition and minibar cocktails made by the hotel bar, the Douglas Club. If you'd like to feel like an A-list celebrity, add on the limousine transfer to the hotel or request celebratory balloons to be waiting for you in the room upon your arrival. After a restful sleep, head downstairs in the morning to Luci for b