Update: We attended this venue in January 2020 and some details may have altered since then.

Restaurants are like real life in time-lapse: a warp-speed universe where five years equates to middle age and ten to sad old dotage. It’s a statement about stiff competition, shortened attention spans and the acute misfortunes of FOMO, but it all combined to make CBD Italian stallion Sarti, after 13 years, ready for the knackery.

Savvy owners Joe Mammone, Marco Tenuta and Michael Badr are guys with runs on the board in old-timer Il Bacaro and newcomers Bar Carolina and Tetto Carolina, and they sure know when to hold `em and when to fold `em. Lesser operators, sensing the heat ebbing from their 13-year-old baby, would have panicked and hit the emergency button marked ‘Italian-American’, but Marameo, nee Sarti, is a much more polished pony. And just like Sarti was to the generation of city professionals who came of age when the coolest thing was to meet for a drink at Meyers Place before kicking on for dinner down at 6 Russell Place, Marameo is destined to be catnip to the corporate army’s junior recruits.

It’s not a place for people still practising their restaurant manners, but the phrase “cheeky Italian”, found somewhat alarmingly on the website, ought to shine some light on the new regime. Sure, it doesn’t indicate the loveliness of the Chris Connell redesign, as cool and considered as the 1967 Alfa Romeo Stradale Prototipo with its soft earthy greys and subtle swatch of peachy banquette. But the food pitch from chef Geoff Martin goes more contemporary, fun and progressive, albeit with the same rollcall of showy ingredients at the heart of good Italian dining.

Wagyu tartare 2.0 arrives early on in the piece, taking cannoli form (ten points for a novelty delivery device) and adding a caper-and-vinegar powder snowfall on top to perk it up (perfect for injecting Scarface jokes while eating). Marameo has also flipped the recipe on just-seared slices yellowfin tuna with jewel-like clarity, adding baubles of veal mayo in a cute inversion of vitello tonnato along with white anchovies, fried caper leaves and the welcome bitter edge of celery leaf.

There’s a more classic bent to seared scallops, served on a light, almost foam-like parsnip puree with witlof and lime. And to bug tail, mayo-bound with salmon roe and corn kernels, sitting canapé-pretty on a carrot crisp like a good idea left in reserve after the Spring Racing Carnival.

Of six pasta dishes wedging the antipasti and mains, cavatelli – those little ridged tubes like carbohydrate witchetty grubs – go mano a mano with a tumble of excellent pork sausage and a smear of broccoli puree. It’s the sort of thing you get if you plug “rugged yet refined” into Pinterest.

The same could be said of the rear courtyard, one of the lost gems of the CBD’s late-`90s rooftop revolution. It’s hemmed in by more neighbouring buildings than when Sarti was in short pants, but it’s now been reimagined to embrace its urban jungle setting with an almost Brutalist aesthetic that will be softened when the greenery takes hold. Still, it’s an inviting place to spritz your way through their summer-attuned cocktail list or go broader on a wine collection set to the dial between Aussie-Italians and Italian-Italians.

It’s also a good vantage point from which to admire the way the owners have worked on redefining their restaurant rather than taking the easier pasta or pizza bar option. There are good ideas here, good service and good desserts (the bigné – a light doughnut spilling innards of salted caramel and white chocolate – could be the best $5 you’ve spent all year, while a garden party-worthy raspberry tart brightened with lemon myrtle could be the best $12).

Marameo proves that there’s life left in smart dining. You could do much worse for the same kind of money; as a matter of fact, the owners could have, too. 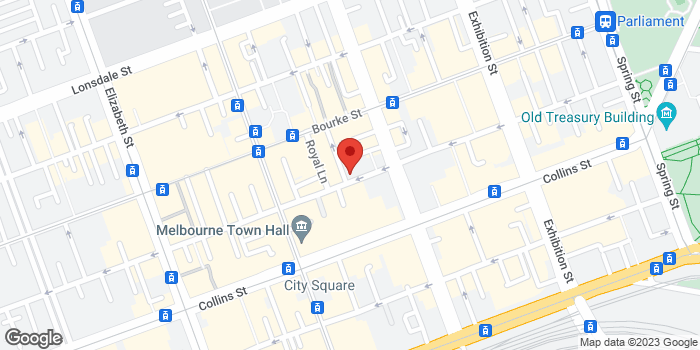