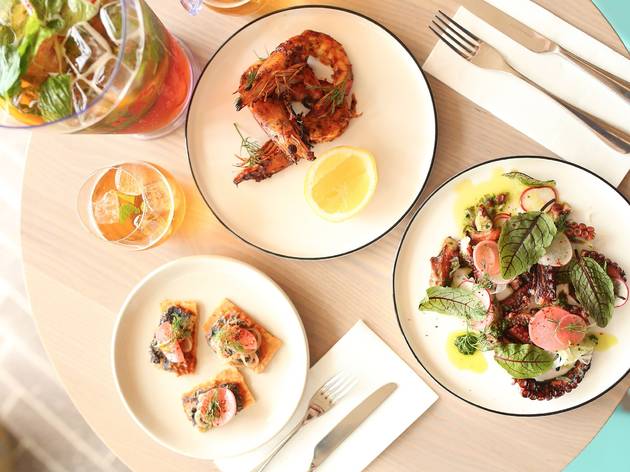 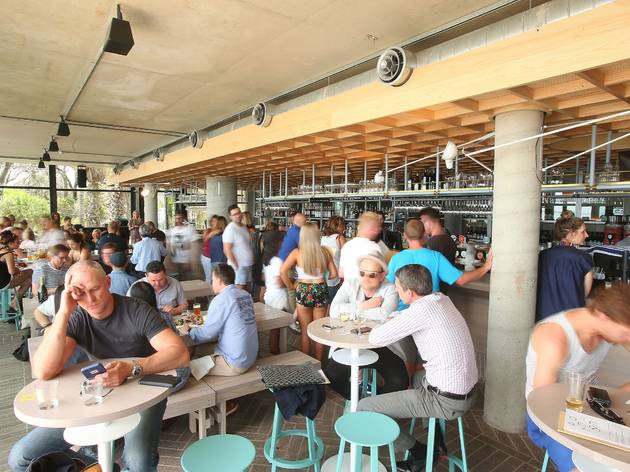 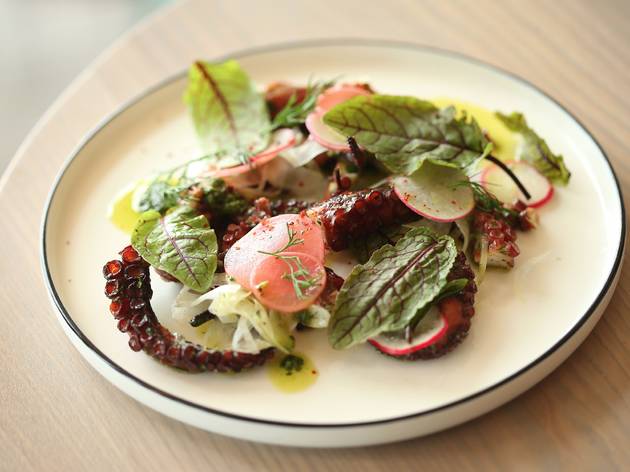 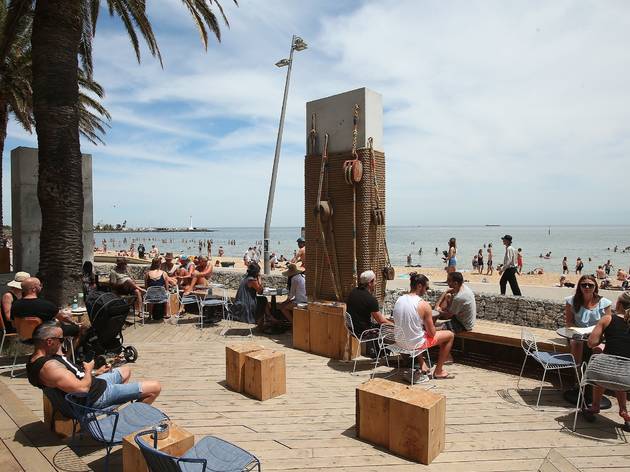 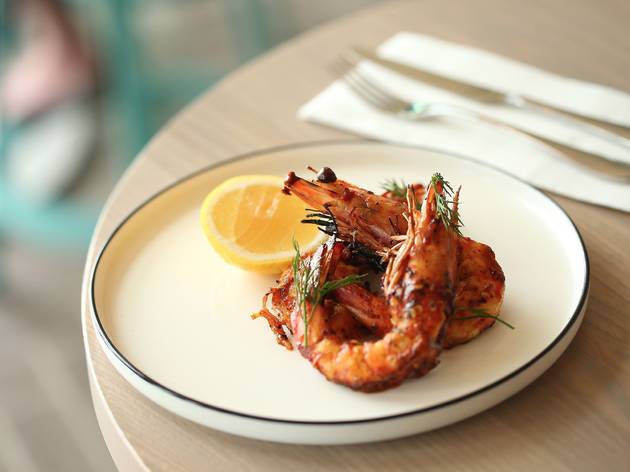 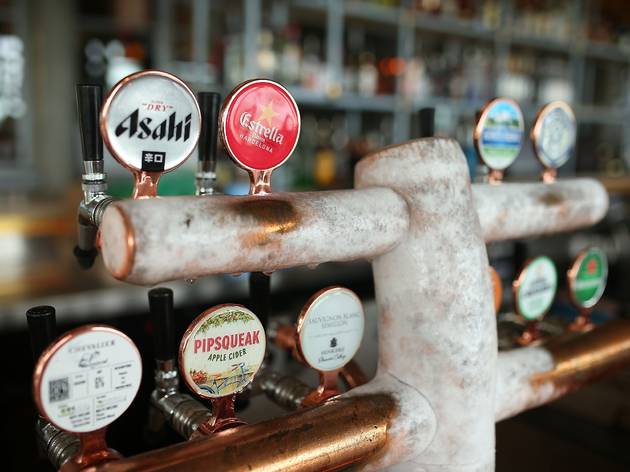 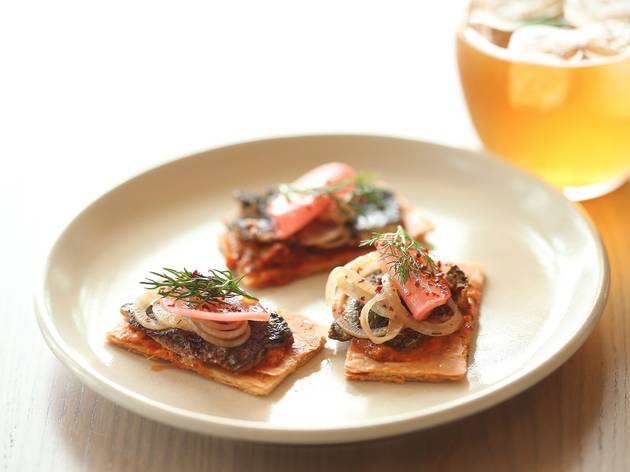 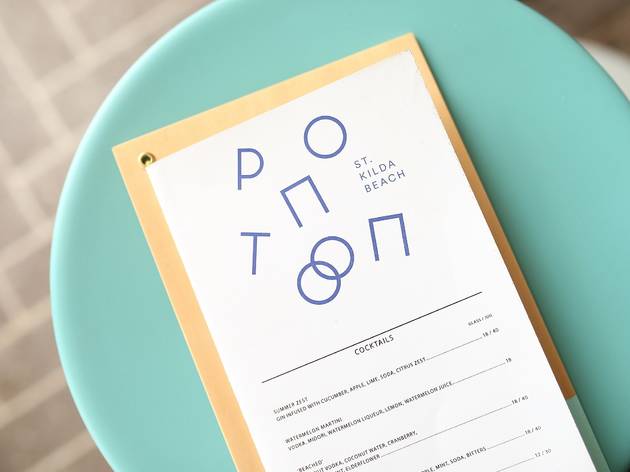 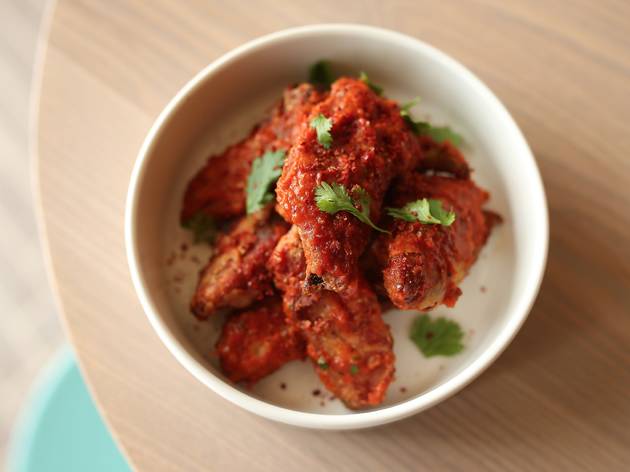 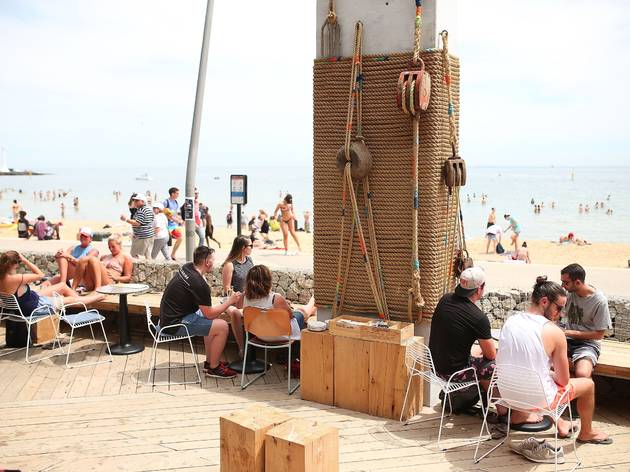 Summer in St Kilda means Stokehouse. Reductive, but true. So it’s been somewhat of a bummer that for the for two seasons Stokie has been on hiatus following the Great Fire of January 2014. And it’s just in the nick of time that the ground level operations – fish and chipper Paper Fish and now Pontoon, the casual restaurant – have opened ahead of the razzle-dazzle unveiling of Upstairs in early December.

Pontoon is a glamour model masquerading as a breezy beach shack. The fitout by George Livissianis, whose stamp is on the trendy Sydney joints Apollo and the Dolphin Hotel, hits a Scandi nautical-but-nice vibe with consummate ease. Thick rope is twined around pillars on the deck, eyeballing the beach just metres away, while inside it’s all textured surfaces, from herringbone concrete tiles on the floor to a honeycomb of rattan suspended above a long central bar.

Seating options? Tale your pick from skinny clusters of tall tables – perfect for posing around in best Mad Men guise –along with picnic tables and low banquettes.

It’s a party place (ably transmitted by its Instagram tagline “40 speakers. DJs. Outdoor deck”), and the prism is also a good way to understand the menu, which is really more of a loose collaboration of dishes freelancing across the Mediterranean/North African divide. Whole king prawns thrumming with a sauce of fermented and charred chilli are a non-sequitur to the smoked chicken ribs, slathered in a pimento-driven sauce, where the chilli goes from a tingle to a bushfire in ten seconds.

Head chef Lance Cameron has a four-metre woodfired grill and oven and he isn’t afraid to use it. There are hero items like the whole spice-rubbed and spit-roasted chook, or lamb shoulder rubbed with yoghurt and herbs. Dabbling around the “lighter plates” yields things punch-drunk in the flavour stakes – like charry iceberg lettuce and radicchio and agrodolce Pedro Ximenez reduction sauce teaming up with the robust Spanish blue cheese Valdeón. See also: charry trunks of octopus in a zippy herb-driven salsa fresca.

With all the salt floating around the place – and we’re not just talking about Port Phillip Bay – you’ll be needing a drink. There are enough taps to satisfy the beer nerds, while the wine list makes a virtue of local heroes without neglecting the Old World (and jugs of Pimms are a note-perfect addition to the cocktails list). You’ll need to remember your table number when you go up to order everything at the bar. It’s a time-consuming process on a quiet Wednesday lunchtime, so clearly it’s something that will need to be ironed out before the crowds reach critical mass over summer. But that’s summer in St Kilda.