The aptly named Sibling is the younger sister to social enterprise stalwart Kinfolk, which has been in residence opposite Southern Cross Station for the better part of a decade. Established in part as another outpost of Kinfolk’s volunteer training program on the back of a successful crowdfunding campaign, Sibling is manned by a regularly rotating roster of volunteers from disadvantaged backgrounds looking to cut their teeth in the hospitality industry and connect with their community. Their names are scribbled on blackboards mounted against the wall, in a swift reversal of the daily rotating specials that adorn other cafés’ walls that is also the most visible sign that Sibling is a café with a different modus operandi.

Where Kinfolk is frequented by a loyal cavalcade of city slickers, Sibling relies on its domed signage and stark white and royal blue clad building to arrest the attention of anyone trundling past on the 96. Inside, it’s a botanical paradise, with foliage archways in a chic industrial warehouse space and scant pops of colour in the teal splashbacks.

Sibling chef Zane Heemi collaborates with local food producers to construct a menu that’s “as moreish and as sustainable as possible”, but if you’re expecting açai bowls and green smoothies, look elsewhere. Sibling borrows influences from every which way of the world, incorporating the Asian rice porridge congee, the grilled white corn arepa of Venezuela and Colombia, and the thick Creole stew gumbo into its multifaceted, mostly vegetarian menu. Smashed avo is usurped by the decidedly more appealing avocado hummus with pickled chilli and shanklish, while eggs on toast is rebranded as ‘a couple of really good eggs’. The menu is partial to those who enjoy a sleep in, with all-day breakfast available and lunch beginning at the relatively early hour of 11.

Sibling’s congee is a balm for Melbourne’s cooler months and peppered with more colour than the classic white gruel. Rich tawny hues of rehydrated shiitake mushrooms swim in a sea of godmother chilli oil, an umami mix of crisp shallots, Sichuan pepper and preserved black soy beans. Combined with bite-sized chunks of marinated tofu and a sprinkling of peanuts, Sibling’s congee is more festive than its traditional cold-fighting muse. The best way to eat this is with a bullseye fried egg served atop, and by mixing the top layer of condiments and runny egg through to coat the rice in equal layers of saltiness and heat.

Offcuts of mozzarella dropped into heavy cream and stirred until they resemble a ricotta-like mixture is stracciatella, Italy’s accompaniment to egg drop soup and toast. Sibling spreads it on the latter, pairing it with acerbic green tomatoes to break up the indulgence and superior crunchy sourdough to boot. The price tag of $17 is inflated if compared to the $15 congee, but it yields you quality over quantity. You won’t want anything more than the slim piece of stracciatella-coated bread – no number of green tomatoes can mask the richness of the creamy stracciatella.

If you’re still hungry, share the doorstopper grilled cheese sandwiches interlaced with the zing of chopped-up kimchi. By themselves, these thick-cut sandwiches would be too much, but the alternating tartness and spice of the kimchi compel you to keep going, even when you’re bordering on catatonia.

Sibling allows the Kinfolk crew to double the size of their volunteer crew over the next two years, while providing a plant-friendly haven for the laptop brigade of Carlton North, who are out in full force when we visit. But you’re just as likely to find the activewear-clad as you are families with young children – Sibling has already cemented itself in the morning routines of those who live nearby. 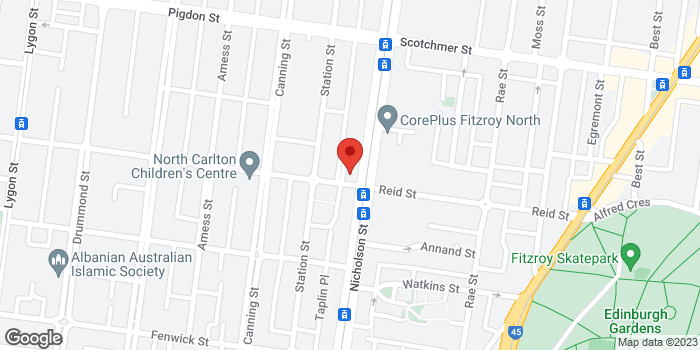