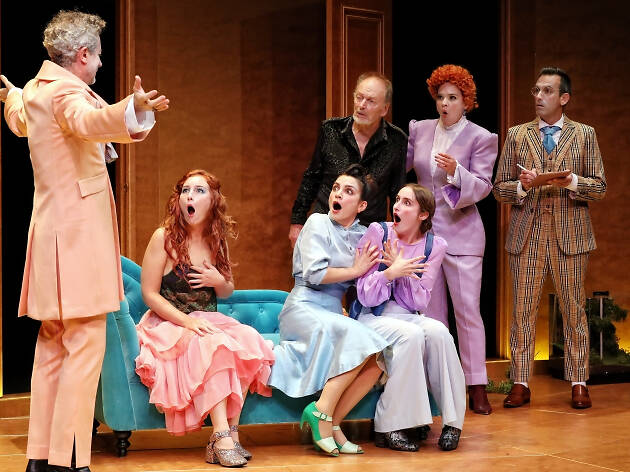 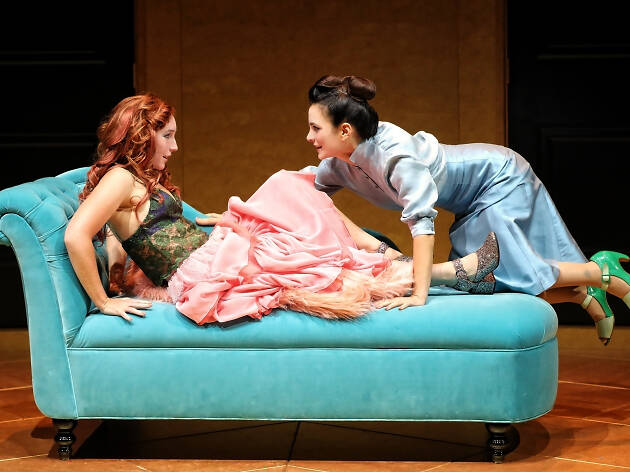 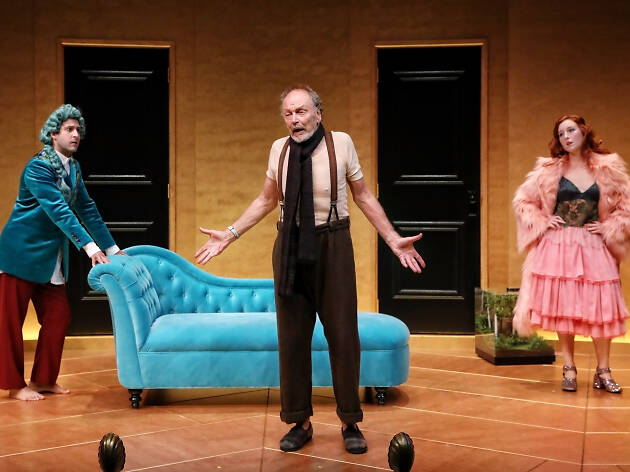 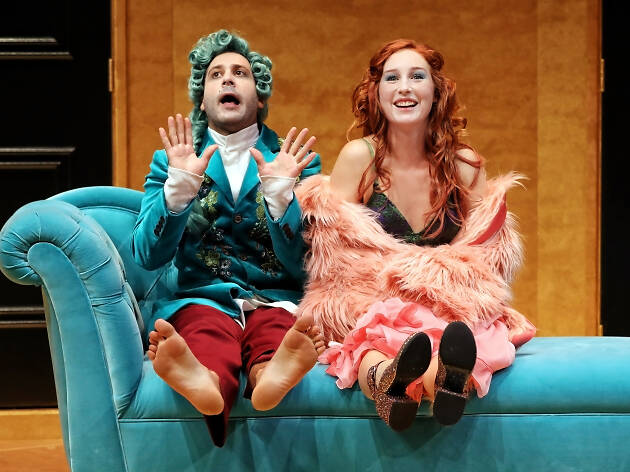 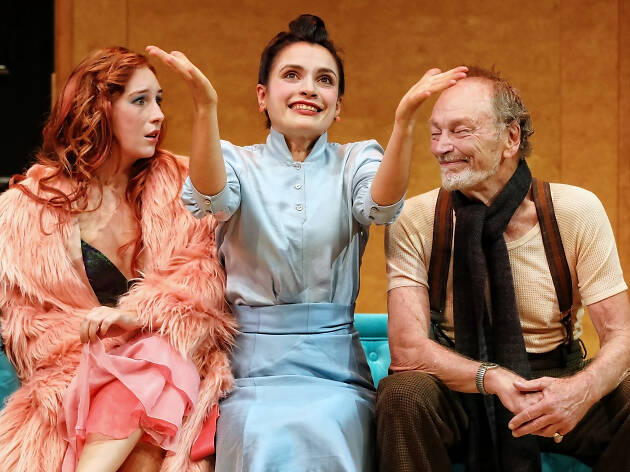 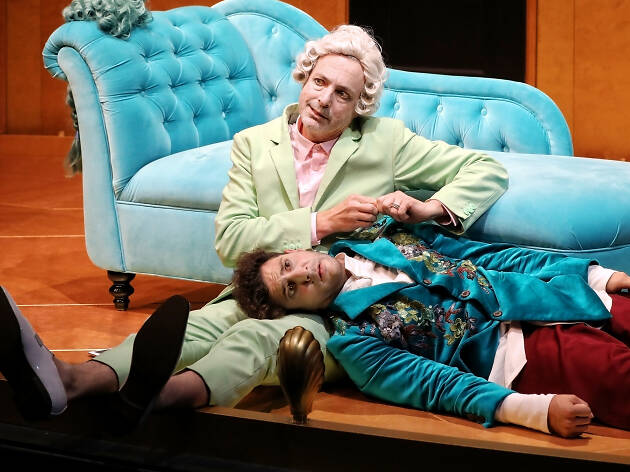 Theatrical storytelling, with all its heightened, fictitious elements, relies on a suspension of disbelief. It’s all the more necessary in a farce, with its exaggerated situations unravelling in deliciously ludicrous measure. Bell Shakespeare’s take on French playwright Molière’s The Miser hits such delightful and superficially pleasing notes with its uniquely thrumming rhyming gait, as it opens up on a 17th century social and familial circle.

At the centre of this circle is stingy skinflint Harpagon (John Bell), but he isn’t just any ordinary money-hoarder: he’s a butt-sniffing, nose-picking Scrooge-type so depressingly frugal that he puts the miser in miserable. He cares more for the 10,000 gold crowns in a tightly screwed money pot in his garden than he does about his children, Cleante (Damien Strouthos) and Elise (Harriet Gordon-Anderson). So it’s not exactly a surprise that he misses a key piece of personal, important news: both of them are in love – Cleante with Mariane (Elizabeth Nabben), and Elise with Harpagon’s own servant, Valère (Jessica Tovey). The problem with their lovers? They’re not exactly to Harpagon’s economic standards – and Cleante and Elise must then conceal their planned betrothals. What plays out is a mismatch of cheeky scenarios filled in with dramatic irony, as Harpagon reveals his plans to marry Mariane for himself, and meanwhile setting up Elise to marry the old, wealthy widow Signor Anselm (Sean O’Shea).

This is Australian writer Justin Fleming’s fifth Molière collaboration with Bell Shakespeare, following adaptations of The School For Wives, The Literati, Tartuffe and most recently, The Misanthrope – and this farce brims with such boisterous vitality that it feels right at home with his smart, inventive poetic speak. Dialogue swings back and forth with rhyming couplets that bring in far-flung references to round off what is dramatically happening on stage; who knew ‘Darth Vader’ could be (sort of) rhymed with ‘Matchmaker’? Fleming’s language encompasses a knack for mischievous, quick-witted rhythm that's surprisingly very easy on the ear. It gives an extra sparkle to normal conversation, but shines most when characters contradict each other, snapping under their breath with quips and jibes, while also effortlessly breaking the fourth wall.

Peter Evans’ direction plays up these facile theatrics in every aspect of this energetic production, and it’s bolstered by an all-round excellent cast delivering hammy performances to a satisfyingly sprightly degree. Gordon-Anderson and Tovey are endearingly funny as a lesbian couple divided also by a master-servant dynamic, and O’Shea’s (doubling as La Fleche) performativity rings with a jocular playfulness, as does Michelle Doake as the perkily exuberant Frosine, the matchmaker for Mariane.

It’s mostly all in good fun watching this comedy-drama unfold, though at a certain point the shell around Fleming’s words cracks open to reveal a more flimsy narrative backbone. Among the witty banter and amusing rhyming, the dialogue leaves little room for any deeper contemplation about the play’s more serious ideas. And they’re so obviously present in Molière’s original text – the harms of greed, and the consequences of familial secrets and deceit – that you wonder why they aren’t touched upon more. Bell delivers a grouchy, nasty portrayal of Harpagon with all his appropriate nastiness – but it isn’t enough: the language’s superfluous albeit impressive nature otherwise glosses over any suggestion that there’s something ugly beneath the interplay of word games.

Luckily, when the text meanders in thinly veiled territory, the technicalities of the show are there to catch our eyes – and there’s much to look at in the campy, richly ornate costume design from Anna Tregloan. From fur coats, glittery shoes to ridiculous wigs – it’s a period piece that’s given the perfect frivolous twist. Matt Cox’s lighting design effectively closes in and out of its characters’ positions to assist punchlines, and Max Lyandvert’s compositions add layers of swoony woodwind and brass that build up the world within this lush estate.

Sometimes we all need a little silly, light-hearted joy in our lives, and this fresh version of The Miser delivers it in bucket loads. But to enjoy its absurd antics in all its full comic glory, you might want to hold onto that suspension of disbelief a while longer – that way, it’s easier to ignore the disconcerting undertones of this production that don’t quite rise as successfully to the surface.

This is a review of the Sydney season of The Miser.