Set across five Victorian townhouses around the corner from the Notting Hill Gate tube, and named after Rhaune Laslett, the founder of the Notting Hill Festival (now the Carnival), the 51-room Laslett rocked onto the London scene in August. With vintage British artworks and designer furnishings by Pinch and Race, the hotel boasts a curated lobby library and gallery, spacious bedrooms, and bathrooms loaded up with Neal’s Yard Remedies. Off the lobby, the Henderson is a bar, restaurant, gallery, coffee shop and boutique store in one. Notting Hill has been crying out for a design-driven property for decades and now the Laslett is delivering. 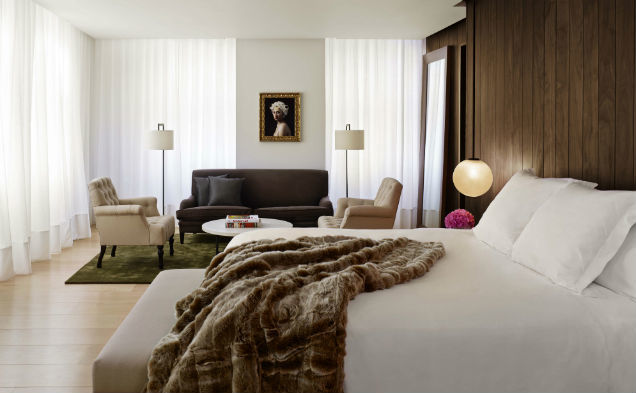 The 173-room London Edition, a collaboration between the godfather of boutique hotels, Ian Schrager, and American powerhouse Marriott, is the digs of choice for fashion designers, rock stars and travellers with an eye for design. The lobby doubles as a happening bar, with rum cocktails served up for guests on tufted sofas or by the snooker table, while next door gun chef Jason Atherton’s Berners Tavern excels for its mod-British bistro cuisine. Hidden away is Punch Room, where concoctions are served in vintage glassware in a venue that’s reminiscent of a members’ club from the 1950s. Upstairs, guests in the hotel’s signature suites are given a do-it-yourself cocktail kit on a vintage drinks trolley, while the design of all the rooms evokes the feel of a luxury ski lodge. 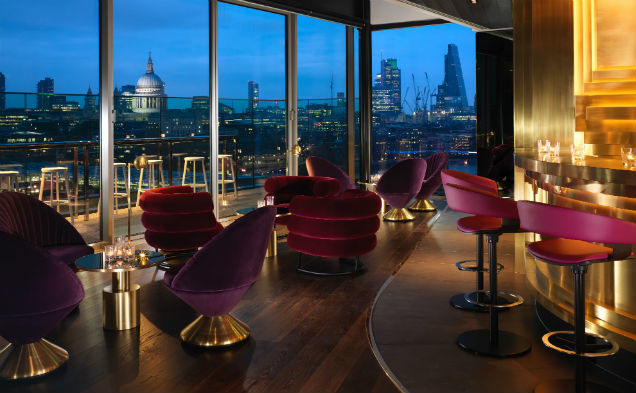 The banks of the Thames next to Blackfriars Bridge and the Tate Modern might not be in the city’s most popular spot for a creative designer hotel but Mondrian London at Sea Containers has become a destination property thanks to its rooms on the river and the city’s best hotel bar. A handcrafted copper hull sweeps from the entrance right through the lobby. That’s also evident in the signature 200-seat restaurant Sea Containers headed up by chef Seamus Mullen and right through the eclectic bar spaces including Dandelyan, led by leading London mixologist Ryan Chetiyawardana, who has been creating cocktail lists with a focus on fresh produce, using herbs from the hotel’s garden.

Mondrian’s sister hotels in London, Sanderson and St Martin’s Lane, haven’t been left behind, with both properties undergoing the knife in recent months. St Martin’s Lane has been given a top-to-bottom makeover, from the guest rooms that now feature linen draperies and pale leopard print carpets to the Philippe Starck-designed lobby, cocktail den Blind Spot led by top mixologist Andy Loudon, and popular eatery Asia De Cuba, where Cuban-born executive concept chef Luis Pous continues to dish up the cuisine inspired by old Havana’s Chinatown in a new bespoke-driven setting. 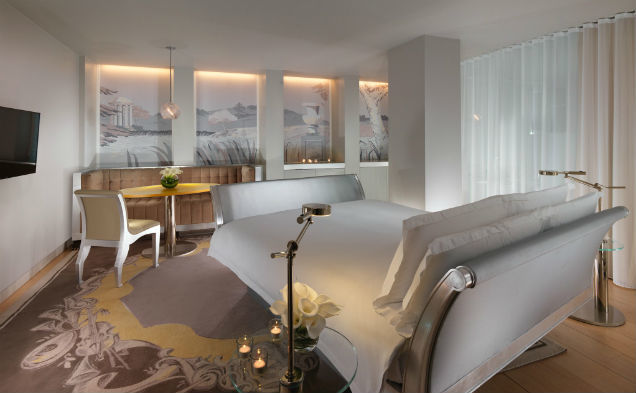 Around the corner at Sanderson, a guest-room renovation was completed late last year, with the star of the show being the loft suite terrace rooms, which feature Philippe Starck-designed king bed frames, free-standing bathtubs and a private outdoor space on the roof with views over Soho. Downstairs, a must is afternoon tea at the Mad Hatters, followed by drinks at Purple Bar and dinner at Berners Street Terrace. 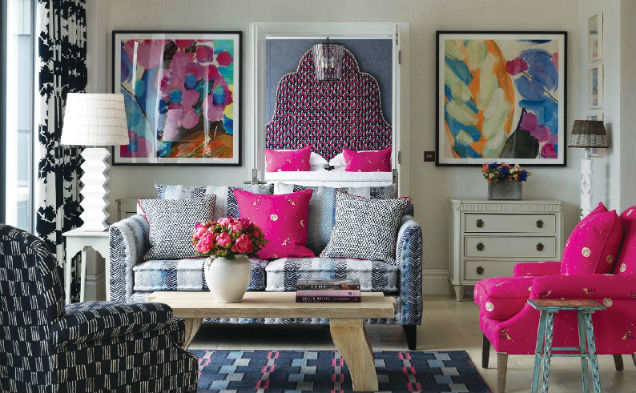 There’s been attention aplenty around the recent opening of the Ham Yard Hotel in Soho, for good reason. Designed by owner Kit Kemp, each of the hotel’s 91 rooms is unique (her trademark) while common areas give it the feel of an urban village. The Library and Drawing Room boast books curated by bookselling legend Philip Blackwell and, as you’d expect, there’s a wide selection on travel. There’s also a spa, gym, a bowling alley, theatre, private event rooms and the Ham Yard restaurant and bar.

Over in East London, Ace Hotel London Shoreditch has become the area’s hottest establishment to rest your head, thanks in part to the area’s galleries, bars, restaurants, performing arts spaces and shops. Its hip designer rooms, the Bulldog Edition café (which serves up Shoreditch High Street’s best coffee), minimalist Lobby Bar, and modernist English brasserie Hoi Polloi are all major draws. Book an Ace suite, which has a wrap-around terrace. 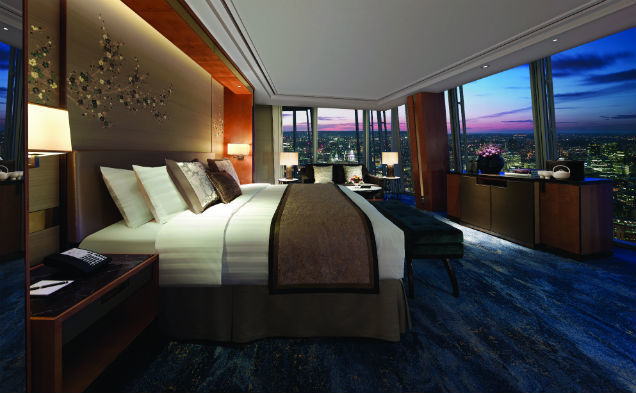 Located in the tallest building in Western Europe on floors 34 to 52, Shangri-La Hotel at the Shard, London is the city’s first high-rise hotel. Find spectacular views in every direction overlooking such landmarks as the Houses of Parliament, Tower of London and St Paul’s Cathedral. Each of the 202 guest rooms has a view and they’re among the largest in the city, averaging at more than 42m2. Score a table at the city’s highest cocktail den Gong, on level 52. 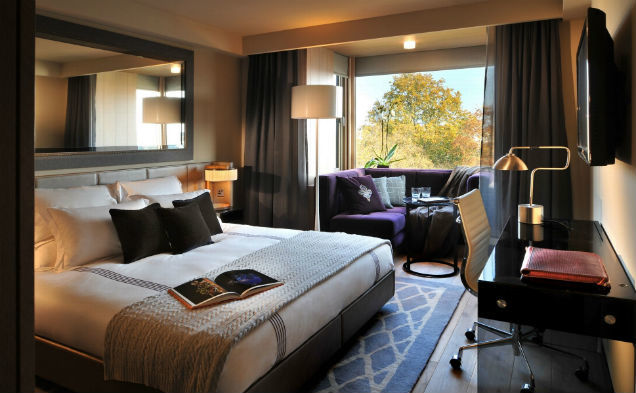 In posh Belgravia, Belgraves has the feel of a members’ club from the moment you walk in. Exposed brick walls, blue velvet couches and artworks line the lobby, which leads to Pont Street restaurant, an eatery from Britain’s youngest female executive chef, Sophie Michell. The Bar and Terrace has one of the city’s best curated vintage Cuban cigar collections and the team behind the mahogany will match them up with a Mojito or Hemingway Daiquiri. Upstairs, find six different room categories with oversized bathtubs, rain showers, banquettes by the window, 400-thread count linens and amenities by Ren.

London also has fantastic bang-for-buck options. At the Corus Hotel Hyde Park London, in a 200-year-old listed Georgian building overlooking Kensington Park Gardens, standard rooms start at £109 per night and for that, you’re getting ensuite bathroom, air conditioning, flatscreen TV and Wi-Fi. Get French fare with live opera at Le Bel Canto, and Malaysian and classic British menus at Olio Bar and Brasserie. The hotel is located next to Lancaster Gate tube, with central London and Notting Hill just minutes away.

Bed and breakfast packages at Rydges Kensington London start from £169 per night in a hotel that’s fresh from a £5 million makeover. You’re not just getting a top location (across the street from Gloucester Road tube), but stylish and modern rooms, and a very decent brekky off the lobby at the Jam Cupboard. The Polo Bar next door is ideal for a pint before a night out or to catch local club Chelsea taking on Manchester United.

Get there
Emirates flies daily to London via Dubai. Expect world-class service, food, wine, seats and entertainment across all three cabins. In Business Class on the Airbus A380s, guests have access to the onboard bar.

Visiting London? Everything you need to know is at timeout.com/london.

If you'd rather less time on a plane and more time relaxing... 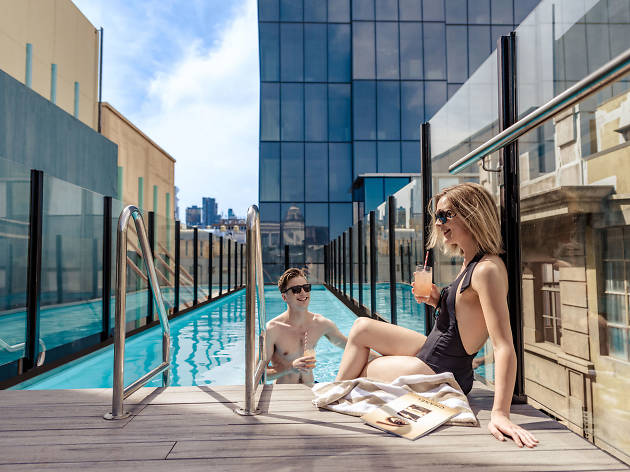 We all have different preferences when it comes to hotels – perhaps you're a fan of staying right in the middle of the action; maybe you're happy to chill out in a boutique hotel in a cute neighbourhood. Whatever kind of vacation (or staycation) you're after, we've got you covered.