In the past decade, SoMa, the formerly gritty neighbourhood south of Market Street, has emerged as one of the most vibrant, restaurant-packed regions of San Francisco. Though it’s now perhaps best known as a tech hub – Twitter, Airbnb, Yelp, LinkedIn, and countless others are headquartered here – SoMa isn’t all branded hoodies and e-scooters. Thanks to its smattering of nightclubs and galleries (not to mention the grande dame museum, SFMOMA), the neighbourhood maintains its arty edge – whether you're in the mood to sample fine wine and ogle rare art or throw back some local beers and dance till dawn. Apart from its culture, SoMa has plenty of places to wander outdoors, from AT&T Park (the only ballpark where kayakers compete to scoop up home run balls) to the idyllic Yerba Buena Gardens. And because most of the BART trains and MUNI buses converge along nearby Market Street, SoMa makes a convenient home base for exploring the city.

Things to do in SoMa 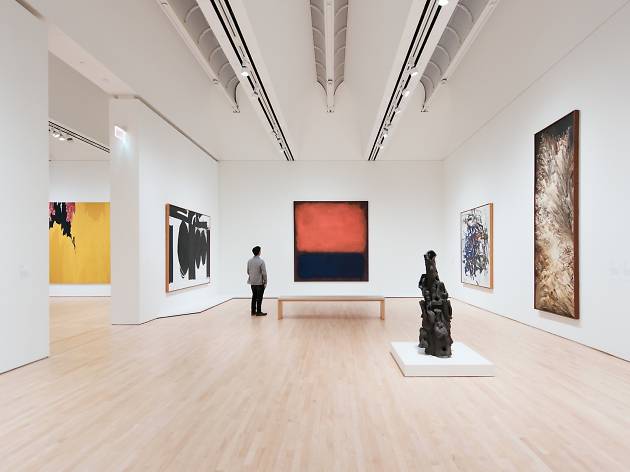 The modern art museum’s brand new building, which opened in 2016, merges seamlessly with its original structure, completed in 1995 by Mario Botta. Global architecture firm Snohetta designed the new addition, making it one of the largest modern art museums in the country. The distinctive, textural facade is inspired by San Francisco’s fog and rippling bay. Inside, you’ll find four floors of art, including six sculpture-decked terraces and the largest living wall in the country. (It’s bursting with more than 19,000 plants, including nearly two dozen species native to California.) Even if you don’t shell out for a ticket – which, trust us, you should – there are still over 4,000m2 of free public art spaces to explore for free, including Richard Serra’s massive, sculptural steel maze, Sequence. Other collection highlights include masterpieces by Bourgeois, Brancusi, Kahlo, Matisse, Pollock, Rothko and Warhol. 151 3rd St at Minna St. +1 415 357 4000. www.sfmoma.org. Fri-Tue 10am-5pm; Thu 10am-9pm. 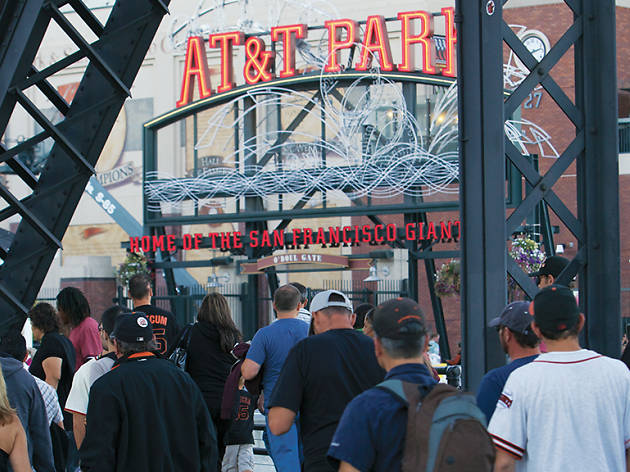 This pop-up village made entirely of shipping containers is the ideal place to tailgate before catching a baseball game. There are ample picnic tables for lounging, a fleet of food trucks, and a dozen beers on tap courtesy of Anchor Brewing Company, a San Francisco standby since 1896. Then head over to AT&T Park (24 Willie Mays Plaza at King St, 415 972 2000; mlb.com/giants/ballpark) to watch the San Francisco Giants play with the glittering San Francisco Bay as backdrop. 100 Terry A Francois Blvd at 3rd St. +1 415 972 1880. theyardsf.com. Thu-Sat noon-7pm; Sun noon-5pm. 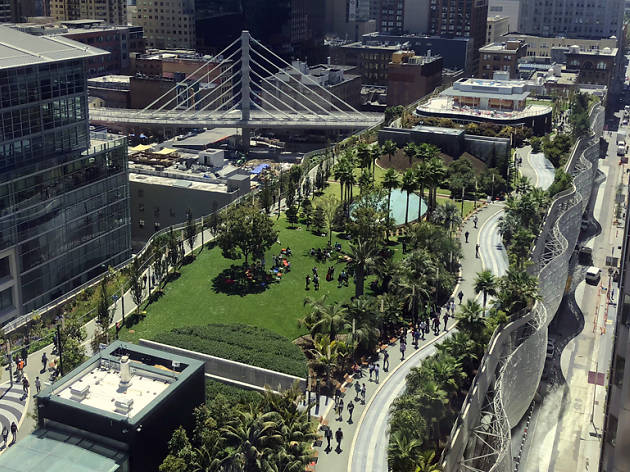 The Transbay Terminal was originally built in 1939 as a transit hub for commuters traveling from Marin, the East Bay, and San Mateo County. After an eight-year renovation, it reopened in summer 2018 with a standout feature: a brand new rooftop park. Take the elevator up to the fourth floor to stroll across this four-block, 2-hectare green expanse, dotted with 600 trees and more than 16,000 plants. Thirteen distinct botanical areas reveal a lush cityscape of landscaped lawns, burbling fountains, a kids’ play area, and an amphitheater for free public events. Don’t miss the 350m fountain by artist Ned Kahn, which shoots jetstreams of water whenever buses enter and leave the terminal below. 425 Mission St at Fremont St. +1 415 984 8626. salesforcetransitcenter.com. 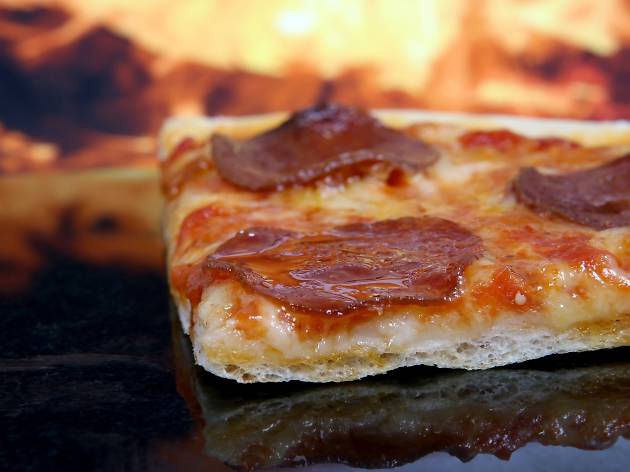 This food truck hub feels like a lively backyard party every night of the week. The crowd is diverse – scientists from UCSF’s Mission Bay campus, tech workers from SoMA, artists from the bohemian Dogpatch district – as are the dishes and brews available. Up to a dozen trucks converge on the light-strung space each night, offering everything from pizza and poke to ramen and crêpes, plus a rotating selection beer from California breweries like Mendocino Brewing and Petaluma Hills Brewing. It’s a great place for large groups, thanks to the affordable pitchers and ample seating. Reserve one of the fire pit areas in advance, or snag a picnic table on the spot. 601 Mission Bay Blvd N at 4th St. sparksocialsf.com. Mon-Fri 11am-3pm & 5-9pm (trucks rotate between 3pm and 5pm); Sat 11am-9pm; Sun 11am-5pm. 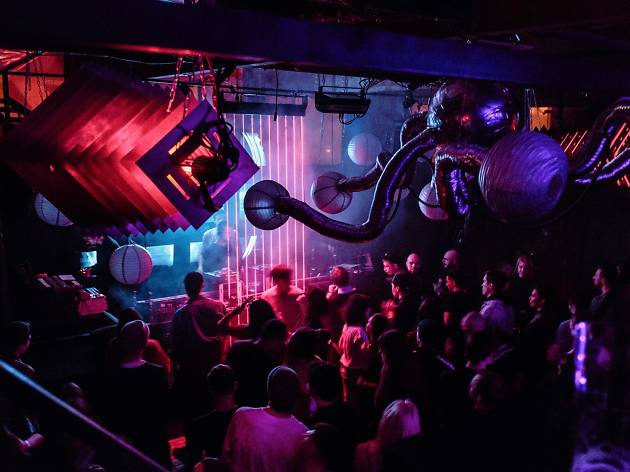 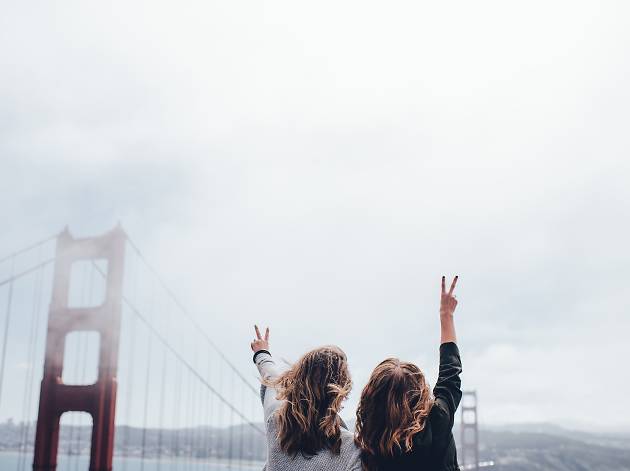 This little-known waterfront gallery houses one of the most impressive photography collections in the country. It’s open to the public by appointment only, which makes the cavernous space – a 2,600m2 former cargo shed – very serene. Founded by collectors Andrew and Mary Pilara, the collection encompasses more than 4,000 works by an international array of artists, including Diane Arbus, Larry Clark, Lee Friedlander and Garry Winogrand. The assortment is particularly strong in portraiture, contemporary Bay Area photographers, early American colour photography, and historical images of San Francisco. Pier 24 at Embarcadero. +1 415 512 7424. pier24.org. Mon-Fri 9am-5.15pm, by appointment. 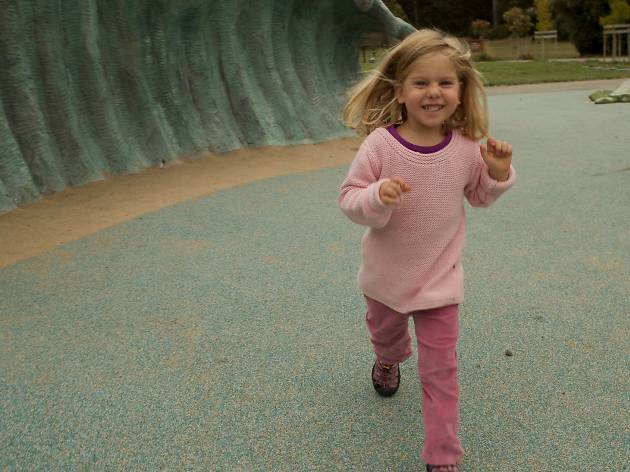 Imagination and creativity rule here – rather than a rowdy playspace, this high-tech kids’ museum is thoughtfully designed to encourage making and inventing. In the Animation Lab, kids knead clay into characters and create their own stop-motion movies. In the Tech Lab, future Googlers learn how to write code by programming robots to play music and solve puzzles. And kids can star in their own music videos – complete with costumes and green-screen technology – in the Music Studio. Outside, take a spin on the ornate LeRoy King Carousel, a storied relic originally constructed in 1906. 221 4th St at Howard St. +1 415 820 3320. creativity.org. Wed-Sun 10am-4pm.

Eat and drink in SoMa 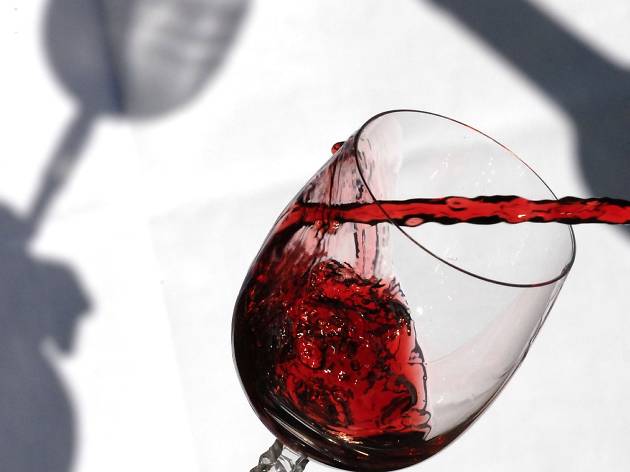 Before there were hotspot wine bars like High Treason and the Snug, there was Terroir – a vinyl-playing, map-decked hangout for adventurous tipplers. The bar specialises in natural, organic, and hard-to-find varietals from California and European wineries. The rotating nightly selection, scrawled on the chalkboard above the bar, offers around 15 wines by the glass, carafe, or bottle. Grab a stool at one of the long tables up front, or climb to the mezzanine for a cosier setting. 1116 Folsom St at 7th St. +1 415 558 9946. terroirsf.com. Mon-Thu 5pm-midnight; Fri 4pm-2am; Sat 5pm-2am. 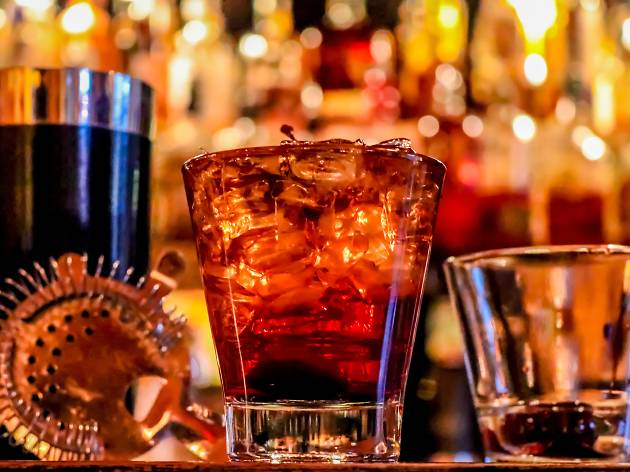 Bar Agricole’s inventive craft cocktails have earned it a James Beard Foundation Award nomination for Outstanding Bar Program for the past seven years running. (Its airy, wood-swathed digs also nabbed it the JBF prize for Best Restaurant Design in 2011.) Bar Agricole – which roughly translates to “farm bar” – elevates bar food to an art, serving a butcher’s shop worth of charcuterie, oysters, and unfussy entrées sourced from local farms. But the main attraction is the list of rum cocktails like the Bulldog, which blends cherry brandy, Demerara rum, lemon, and stone fruit bitters. 335 11th St at Folsom St. +1 415 355 9400. baragricole.com. Mon-Thu 5-10pm; Fri, Sat 5-11pm. 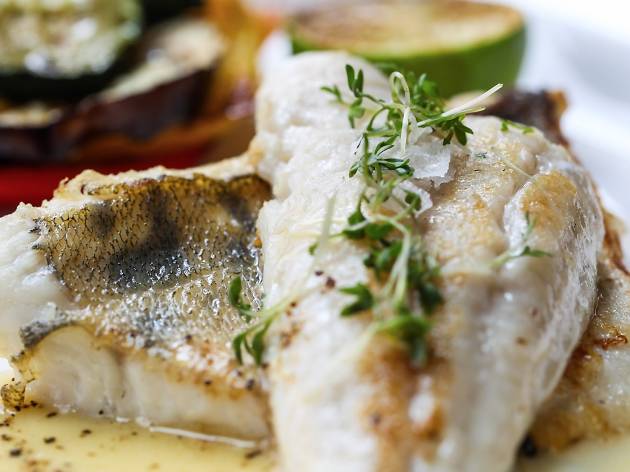 Helmed by Michelin-starred chef Chris Bleidorn, this ambitious newcomer is an ode to the Pacific Northwest, serving wild game (say, buffalo, deer, or antelope), creek-raised fish, and locally sourced produce. The style may be upscale fine dining, but the cooking techniques are downright ancient. Request a spot at the 12-seat counter to witness the open-fire cooking, dry aging, and smoking in the unenclosed kitchen. Splurge on the ten-course prix fixe menu ($168) or visit Tuesday through Thursday to order à la carte. 1085 Mission St at 7th St. +1 415 369 9161. www.birdsongsf.com. Mon-Thu 5-8.30pm; Fri, Sat 5-9.30pm. 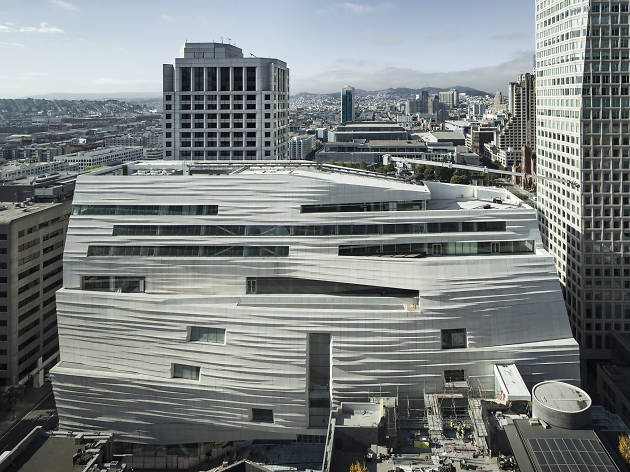 Fittingly for a restaurant situated in a museum, In Situ transforms food into fine art on a global scale. The menu is the result of foodie crowdsourcing: chef Corey Lee contacts renowned, boundary-pushing chefs around the world, from Chicago to Berlin, to contribute a dish and its recipe, which he faithfully recreates using local ingredients. The resulting 14-dish menu is a dazzling display of ingenuity and inventive flavours. The menu displays the name of each dish’s creator, their location, the ingredients, and the date it was conceived. 151 3rd St at Minna St. +1 415 941 6050. insitu.sfmoma.org. Mon 11am-3.30pm; Thu-Sat 11am-3.30pm & 5-9pm; Sun 11am-3.30pm & 5-8pm. 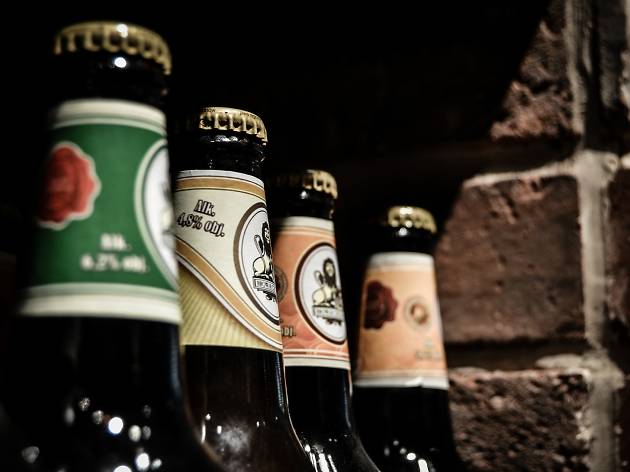 This is the place for serious beer buffs. Craig and Beth Wathen relocated their Folsom Street beer store and bar to Mission Street in summer 2018 for a long-overdue expansion. The couple’s industrial-sized coolers hold over 400 beers organised by style, from blondes to barrel-aged to Belgian darks. The spot is particularly renowned for its selection of IPAs and sour beers, including limited-edition collaborations with local breweries like the Bruery and Cellarmaker Brewing. Mix and match the ideal six-pack or case to go, or crack a bottle open on-site at the adjacent bar, where 15 rotating beers from local breweries like Temescal Brewing, Barebottle Brewery, and Faction Brewing are also on tap. 1148 Mission St at 7th St. www.citybeerstore.com. Daily noon-10pm. 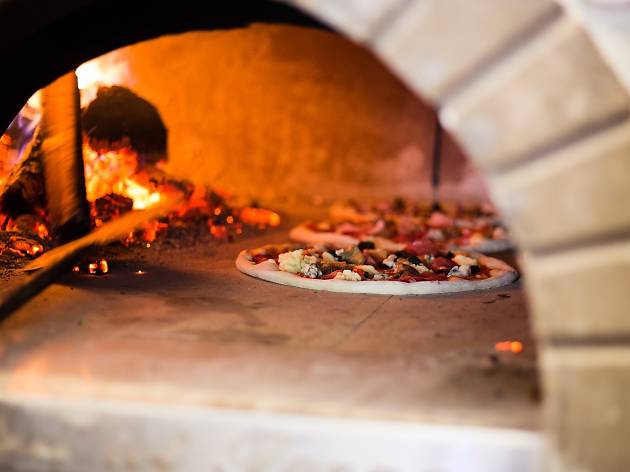 Dining at this lively Spanish restaurant feels like a taking a detour to Seville. The mesmerising open kitchen showcases a woodfired oven, elaborate workstations for tapas assembly, terra cotta pots bubbling with stew and a hulking industrial slicer for imported cheese and charcuterie. Order one of the specialty paellas, which feed two to four, and wash it down with a proper Gin and Tonic flavored with juniper, citrus or elderflower. 888 Brannan St at 8th St. +1 415 430 6580. bellotasf.com. Mon-Thu 11.30am-10pm; Fri 11.30am-11pm; Sat 4-11pm. 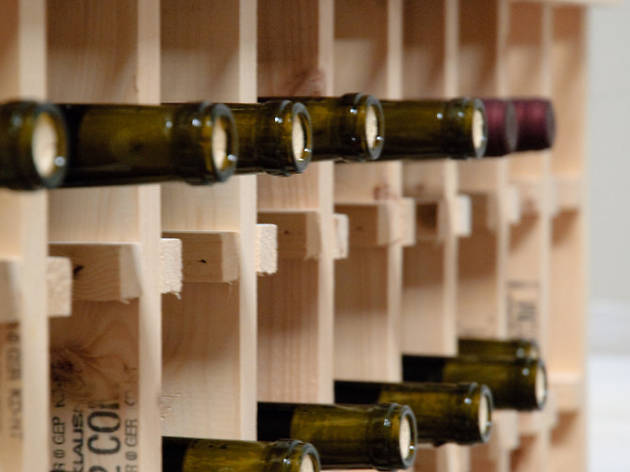 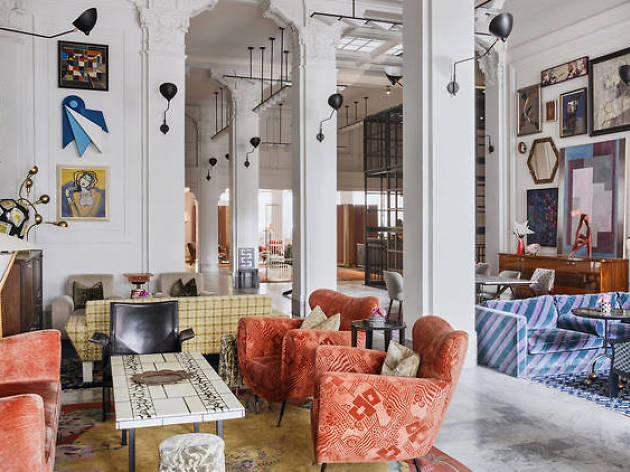 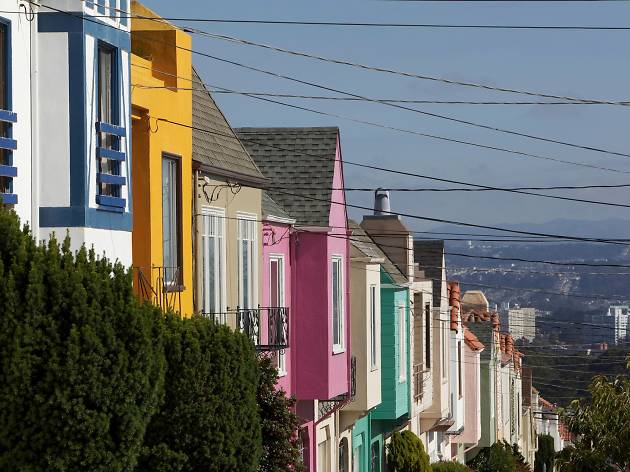 This century-old hotel got an upgrade in spring 2018 when it was purchased by the Sonesta hotels group. The 372 rooms were refreshed by star designer Philippe Starck and include 300-thread-count bedding, custom English sycamore furniture, flatscreen TVs and cosy Merino wool throws. Thankfully, the historic Redwood Room bar downstairs retains its Art Deco charm, from the etched glass bar to the original redwood paneling. 495 Geary St at Taylor St. +1 415 775 4700. www.sonesta.com. 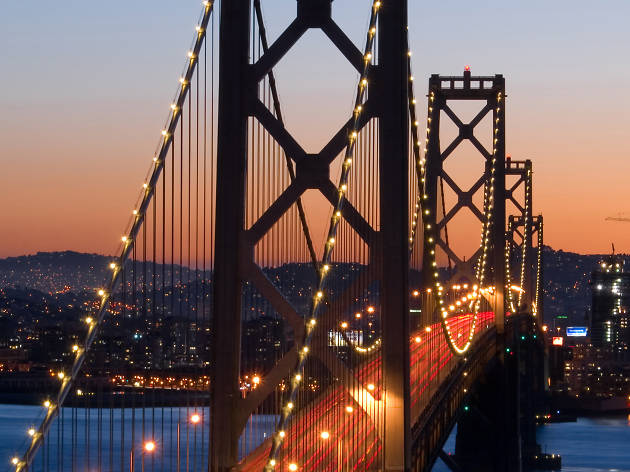 This 159-room property is sleek, monochromatic and modern. Its inviting rooms are decked with curvy cream chaises longues and dove gray upholstery, while the halls are swathed in a glinting metallic mesh. But the real selling point is its ballpark-adjacent rooftop bar, dotted with fire pits, cabanas, and ample heat lamps. The indoor-outdoor space offers in-the-round views of the city, the Bay, Bernal Heights and the East Bay. 138 King St at 3rd St. +1 415 200 4977. hotelviasf.com. 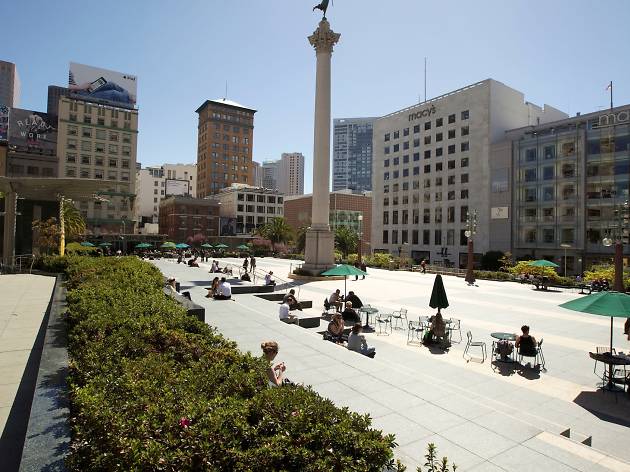 The Hilton is conveniently situated in the center of downtown. It’s a few minutes’ walk to Union Square, the city’s main shopping hub, and two blocks from Market Street, where you can jump on Muni transit to get to the Ferry Building, Fisherman’s Wharf, the Exploratorium and the Embarcadero. Well-appointed rooms are swathed in shades of cream and gray, with comfortable beds and welcome perks like mini-fridges and Wi-Fi. Request a Skyline room for views of the cityscape or Bay. 333 O’Farrell St at Taylor St. +1 415 771 1400. hilton.com.