22 New Yorkers reveal where they go to cheer themselves up

New York has the power to make us angry and send us on some long-winded rants. We may be quick to point the finger, but more often than not, it’s not truly the city’s fault. Knowing that we all endure similar highs and lows life throws our way is very unifying and humbling. But during all the heart-breaking moments and just downright rubbish days, we’re here to remind you that no matter how low you may be feeling, you’re living in the most wonderful city on earth. New York is magic, from its many cultural attractions, museums and parks, to its restaurants and nightlife. Certain spots have restorative, mood-shifting powers. To prove it, we asked Time Out New York’s crew of Tastemakers as well as some of our very own editors to share where they go to cheer themsevles up. Keep this list handy the next time you’re in a crisis or if you just need a recommendation for a place to catch your breath.

RECOMMENDED: Full guide to things to do in NYC

“If you’re a dog lover like me, dogs instantly brighten my day. When I’m not feelin’ the day, I like to stop by Pet Central in the West Village. There are so many adorable puppies! Bad vibes leave once puppies are in the midst.”— Mallory Meade

“I love walking from Bryant Park to Union Square in the evening. Walking through NYC is one of my favorite things, and when paired with the right kind of music, it's the perfect way to feel better about the world. (It also never hurts to end a walk with a large soft serve from Chloe's at Union Square and 17th St! The pineapple is AMAZING.)”— Chloe Wilson

“If I’m ever feeling like I need a refresher or something to cheer me up, I always love to visit Strand Book Store. There’s something very relaxing about browsing all the aisles and seeing what people are reading. I’m an avid reader, so this is a favorite of mine!”— Katie Harman

“I love walking around my favorite part of the city which is in the West Village. I can get lost in this little book store called Three Lives & Co. for a while. Then I will have some ice cream from Van Leeuwen, which is right across the street. If i'm feeling up to it, I also head to Smalls Jazz Club which is a little basement jazz establishment that always has great artists playing there. The beautiful and quaint streets in that area makes me so happy!”— Nazra Khalid 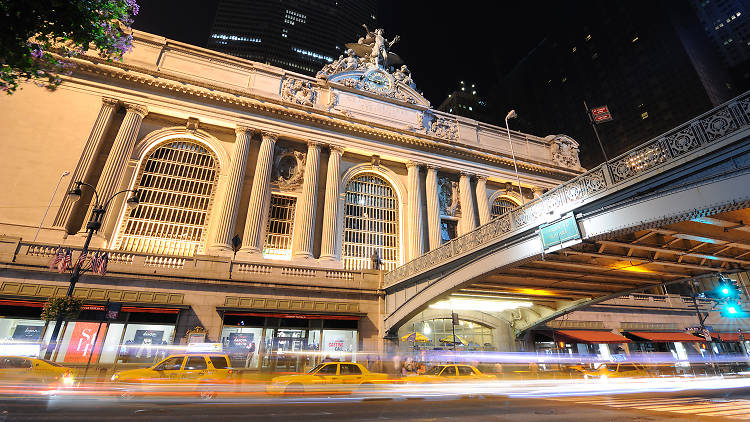 “Oddly enough, Grand Central Terminal! New York is big and crowded and fast paced—it's so easy to get lost in it all. So when I need a breather, I'll put my headphones in and sit on the steps of the main concourse. There's something calming in stopping to take in the beautiful madness”— KC Cibran

“When I’m super stressed at work, I head over to Greenacre Park on 51st St between Second and Third Aves. There are trees, plants, flowers and a 25-foot waterfall. Just sitting there at one of the tables listening to the falling water takes me to a peaceful far away place!”— Julie Strollo Coleman

“When I'm feeling low, I enter Broadway ticket lotteries! You'll never be sad watching a Broadway show, and winning the lottery for any show is SO exciting. A lot of them are pretty easy to win!”— Mary Brownlee

“I go for a run along the East River down to East River Park. There's so much greenery and water and skyline, and you get to really take in how pretty NYC can be while you cast hexes on the people you hate in your head. On the way down, there's even a mini beach when tide is low, which I always daydream about chilling on someday.”— Jake Cohen, food & drink editor

“If it's night time, I like to go to the Slipper Room for a variety show, or the Comedy Cellar for some stand up. Both shows are guaranteed to make you smile at some point. (Plus, at Slipper Room they do burlesque, which is fun!) If I'm feeling not so great but ya girl's gotta eat, I like to go to Vanessa’s and get dumplings or I head to Red Rooster for some fried chicken. Comfort food is a must!”— Delia Barth, video editor 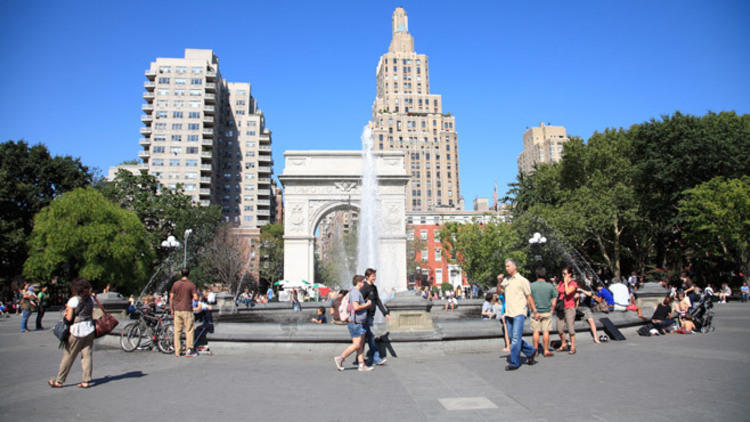 “I tend to head over to Washington Square Park and sit in the fountain. Not next to it, in it. There's always a safe dry zone on one of the sides. Between the arch and the running water, it's just easy to unwind. And if you need a distraction there's always plenty of people watching.”— Samantha Mellone

“Brooklyn Bridge Park. Being there always makes me take a step back and look at how big this city truly is, and how grateful I am to be a part of all the crazy that comes along with it.”— Christa Sully

“Whenever you're feeling down, try catching the sunset on the J train, and make sure you look to the Brooklyn Bridge side. It's breathtaking, trust me.”— Bridget Lo

“Williamsburg Bridge for it encapsulates what New York is all about. While it isn't the prettiest bridge in NYC, it has that cool, rough-around-the-edges vibe to it with the subway, bike and walking path, and the road all on it. Every time I walk across it, I stop in the middle to take in how wonderful New York City can be.”— Raymart Dinglas 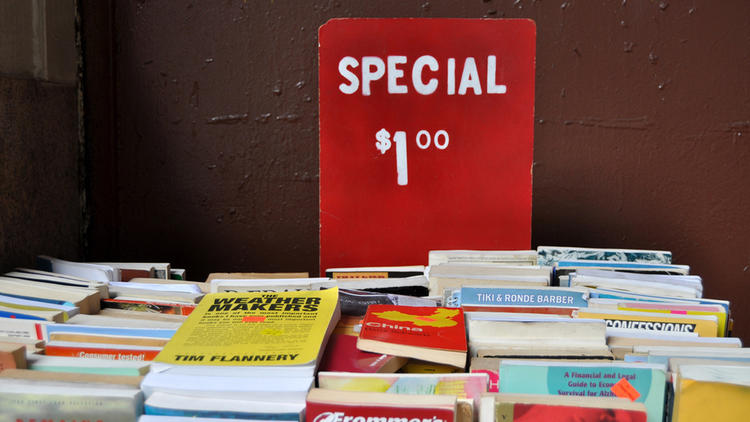 “The rare book room at Strand because everything is beautiful and organized and I always either find something that I become immediately obsessed with that distracts me or I find an amazing present for someone else and then I look forward to giving it to them even though they're usually like, "Wow. A book on 18th century botany. Just what I wanted?" — Will Gleason, staff writer

“Grounded Coffee House: It's the quintessential homey café with a skylight, hanging plants and comfy couches to meet a friend and vent, or spend mindless hours reading a book or getting lost in your laptop (being productive of course, so not stalking exes). Order from the selection of 'wellness' teas if you're feeling a little under the weather.” — Alyson Penn, associate food & drink editor

“Linda's at Bergdorf Goodman: Linda Fargo is the director of women's fashion at Bergdorf Goodman, and she has a micro-boutique hidden away on the fourth floor of the store's womenswear building. It is garment-geek paradise. It looks completely different from the rest of the store—like an overflowing vintage boutique filled with color and eccentric touches. The reason it makes me so happy is that Fargo doesn't base her buy for this section on price, she bases it on how joyful the piece makes her feel, so you can find some of the cheapest items in the entire department store at Linda's, and they're still incredibly covetable. Basically, it's the only way you can engage in retail therapy at Bergdorf's if you've got a normal human's wardrobe budget. There's a real sense of fashion as play in the space, so even if you just drink a (free) coconut water, try on some gowns and don't buy anything, you still walk away feeling amazing. Also, the walls of the change room are lined with all the fashion week runway show invitations Linda has ever received.” — Alyx Gorman, global engagement lead

“Record store crawling in Greenpoint: Even when I don't have the dough, sifting through vinyl at Academy, Co-op 87, Captured Tracks and Record Grouch makes me lose my life thoughts and forget about my troubles. (And most peeps run against those High Fidelity record-store-snob stereotypes.)”— Tim Lowery, national features editor

“There a small flower garden to the side of the Jefferson Courthouse on Sixth Avenue at Christopher Street. It is open from April to October and there's a winding path inside it and it is a perfect little oasis from the city.”— Adam Feldman, national theater & dance editor 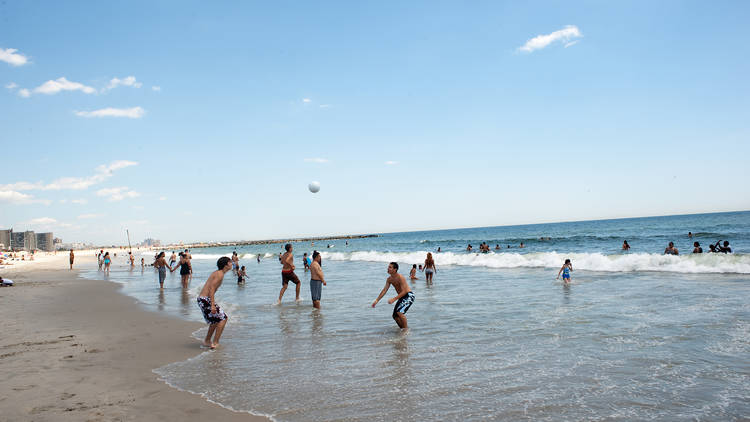 “The A train to Rockaway Beach. Yes, I know taking a subway sounds depressing, but the last stretch straddling Jamaica Bay is wonderful, and then you're at the beach!”— Brian Martens, circulation and distributon manager

“Desert Island in Williamsburg. It’s always stocked with new and weird comics, zines and prints from local artists and crazy imported art books to stare at and forget your woes. Ask the guy behind the counter what’s good and he’ll always point you to something amazing (and inspiring) you didn’t even know existed.”— Andrew Frisicano, music editor

“I'll do a couple of loops around the Prospect Park lake at sunset. This time of year the parent swans and their babies like to hang out on the lakeshore at dusk, always in the same spots.”— Jillian Anthony, editor