In 1938, Al Ferreri—yes, that Al—started slinging beef sandwiches in Little Italy. Legions of competitors followed suit and the delicacy took off, or so one popular version of the origin story goes. Point is, somewhere along the way the humble Italian beef sandwich became one of the most iconic Chicago dishes. Now you’d be hard-pressed to throw a rock in our city without hitting a beef stand—but not all are worth the messy hands and the unmistakable eau de jus that seems to linger for hours. From the Loop to the ‘burbs, these are the best Italian beef sandwiches in Chicago.

RECOMMENDED: Our guide to the best restaurants in Chicago

Best of the city under one roof 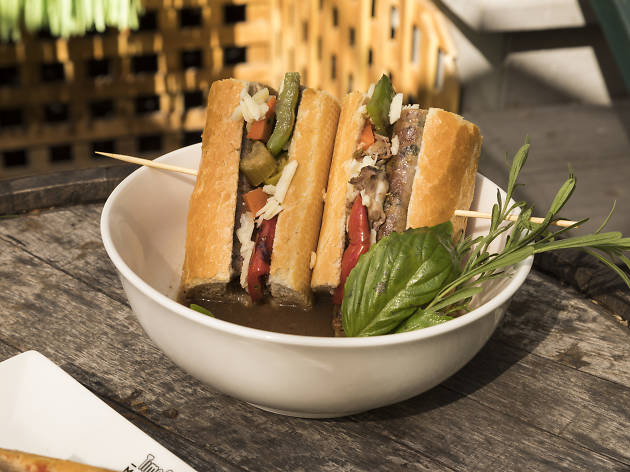 You didn’t think we’d open Time Out Market Chicago without an Italian beef, did you? The iconic delicacy is a deliciously messy rite of passage for locals and out-of-towners alike. At Decent Beef, chef Kevin Hickey (The Duck Inn) elevates the handheld classic with juicy shaved prime rib, a rich beef jus, hot giardiniera and sweet peppers—all tucked inside a crusty roll. Pro tip: Vegans and vegetarians will love Hickey’s ingenious Beet Street sammie, which subs meat for delicately sliced roasted beets and umami jus. Save yourself the return trip and grab some napkins now. 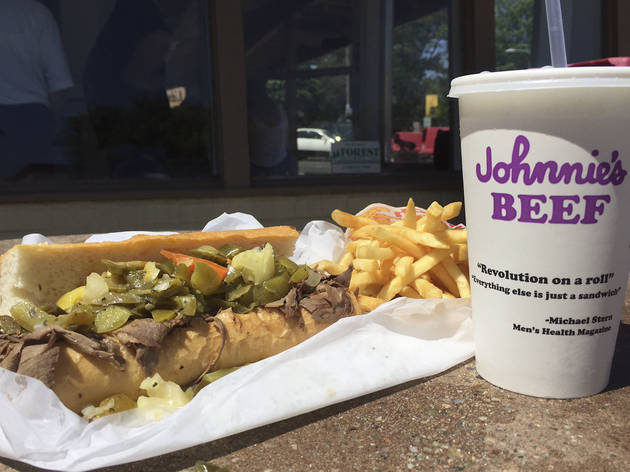 Hop in line (it looks intimidating but moves with impressive efficiency) at this charmingly retro Elmwood Park stand and let the smoke of chargrilled sausages tickle your nose while you await the platonic ideal of an Italian beef sandwich. A Johnnie’s sandwich hits all the right notes, from the fresh, supple Gonnella bread to the chunky, just-piquant-enough giardiniera to the herbal bouquet that rises from the steaming jus like an intoxicating perfume. But most remarkable is its utter, well, beefiness; it’s a sandwich that eats like a kind of bomb of umami savoriness. When you’re done, cleanse your palate with the velvety housemade lemon ice. 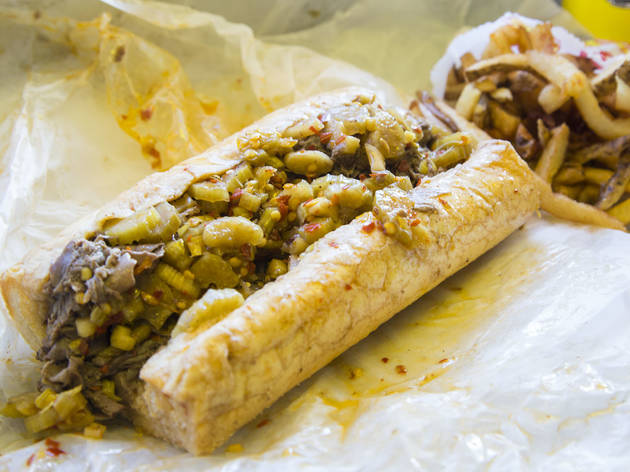 It’s not hard to see why Al’s is an enduring favorite among Chicagoans and a mandatory port of call for many tourists. In addition to being shaved so remarkably thin that it’s practically transparent, the beef is redolent of a mysterious secret spice—is it cinnamon? Cloves? Nutmeg?—that distinguishes it from all others. Comfort in one’s outsized reputation can sometimes tip into laurel-resting, and on some visits here we’ve been disappointed by stale bread or giardiniera applied with a stingy hand—but sooner or later, the enigmatic perfume of the beef always pulls us back in. For a change of pace, try the Gypsy Fries, a gonzo poutine of fries, jus, cheese sauce, beef, and giardiniera. 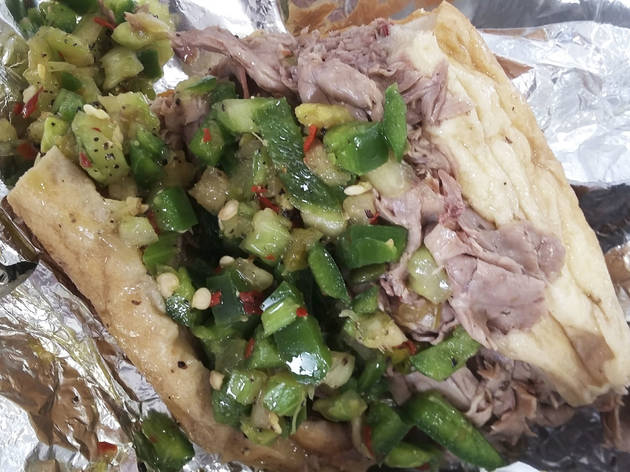 For one of Chicagoland’s best Italian beef sandwiches, you’ll have to venture outside of city limits, to the far southwest suburb of Homer Glen. Here, Carl Bonavolanto III, son of the original owner of Mr. Beef on Orleans, serves up his ancestral sandwich from a strip mall storefront adorned with mob movie posters. (Bonavolanto’s father sold the Orleans location, sans family recipe, back in the ‘80s; it and his son’s Homer Glen shop are completely unconnected.) The genuine Bonavolanto article is well worth the trip; the beef is incredibly succulent, the jus perfectly garlicky and salty. It’s topped with giardiniera that might be the best we’ve ever encountered, a spicy, wonderfully fresh-tasting mix of diced green peppers, celery, and red pepper flakes. 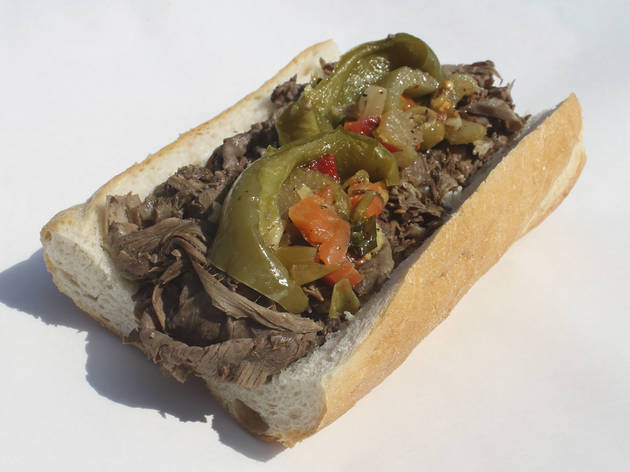 Even unadorned, the Italian beef at this bare-bones Portage Park joint is quite serviceable indeed, built around jus-trapping shreds of subtly spiced beef. But it’s the hearty house giardiniera that really elevates this sandwich; comprising chunks of crinkle-cut carrot, green olive, celery, cauliflower and pepper, it adds major crunch and a pop of acidity that balances out all that meatiness. If you want to up the ante, go for an Atomic Combo, which augments the standard beef sandwich with a fiery sausage created by none other than Hot Doug Sohn. 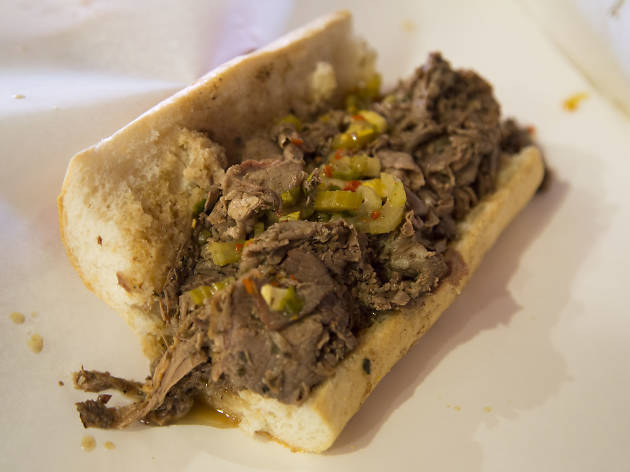 This Taylor Street grease joint is a favorite of 12th District cops, which is always a good sign. The Italian beef might be the best in the neighborhood (and according to some, maybe in the entire city). The Patio’s combo—an Italian beef and sausage smushed into a giant bun—is nothing short of legendary. A meal at the Patio is sure to raise your cholesterol levels by a few points, but it’s definitely worth it. 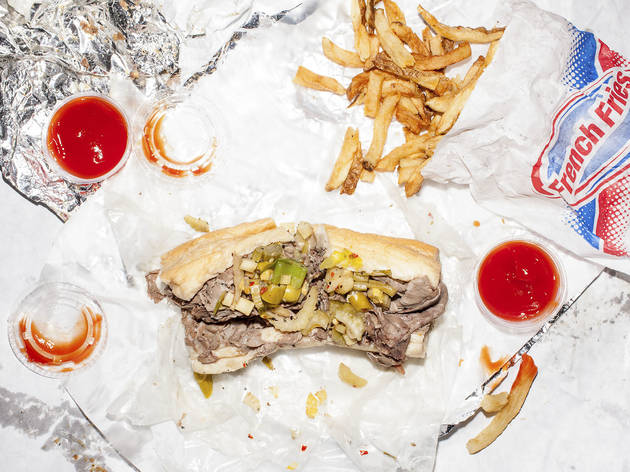 There’s not much nuance about this long-running River North staple; the employees aren’t afraid to bark at you for indecisiveness, the walls are overwhelmed with celebrity photos and random ephemera (e.g., a cutesy ode to beef composed by a sixth grader hanging directly over a headshot of Keith Richards puffing a cig), and the Italian beefs are hefty and so unapologetically oily as to immediately render their paper wrappings transparent. Throw mannerliness to the wind and you’ll be rewarded with a sandwich of slightly fatty beef, expertly dunked in aromatic jus so that the bread’s edges retain a pleasing trace of crustiness. Celery-dominated giardiniera adds crunch, but comes up a bit short on flavor. 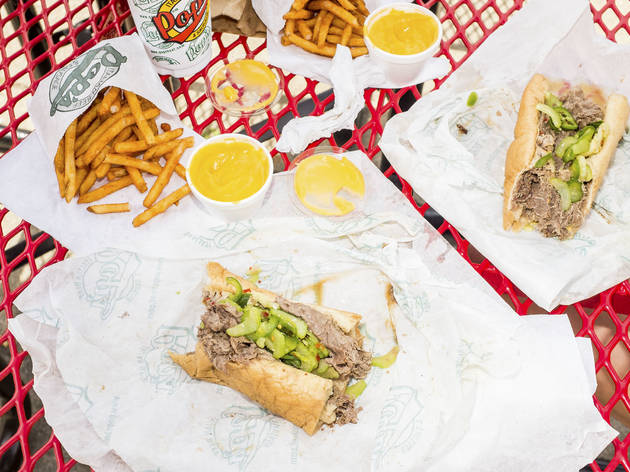 There are 14 Pop’s scattered around the Chicagoland area, but only the diminutive Mt. Greenwood location has the old-school vibe that somehow makes the food taste a bit more special. The finely shaved beef here savors of garlic, and dips are executed in a best-of-both-worlds fashion that soaks only one side of the dense, spongy bread, allowing for a nice textural contrast. The liberally applied giardiniera, a verdant mix of mandolined jalapeño and celery, is like a cousin to Chickie’s, except with a good bit more heat and a pronounced oiliness that spills over the dry side of the bread, giving it a shellacked quality. 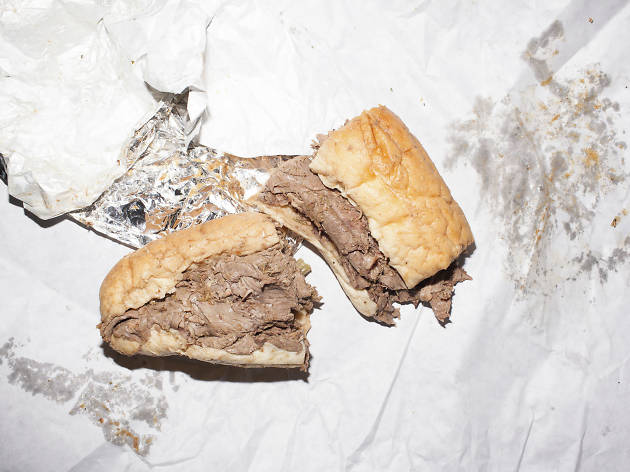 If serious heat is your thing, this Italian sub institution has the beef sandwich for you. It’s available dressed with super hot giardiniera, a housemade blend of don’t-dare-touch-your-eyes-afterward (no joke) habaneros and pungent capers. (For tamer palates, there’s also mild and standard hot giardiniera, as well as sweet peppers.) The beef here is tender, well-seasoned and cut into thick ribbons, so even the smallest sandwich on offer (9 inches) will keep you going for the better part of a day. 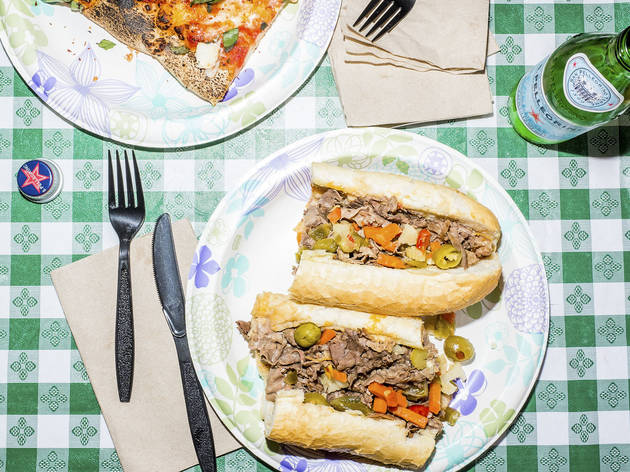 There’s much more than pizza on offer at this Cicero gem—think housemade porchetta, tender pillows of ricotta-stuffed gnocchi, all manner of groceries imported from the Boot—and oh yeah, one of the area’s best Italian beef sandwiches. The beef here is herbal and fragrant, and the giardiniera—a colorful combo of carrots, red pepper, celery and cauliflower—has a mild, pleasant burn and an oiliness that mingles beautifully with the jus, adding layers of flavor and richness. Flaky Turano bread holds together nicely following a light dip, making this one of the tidier specimens on our list. 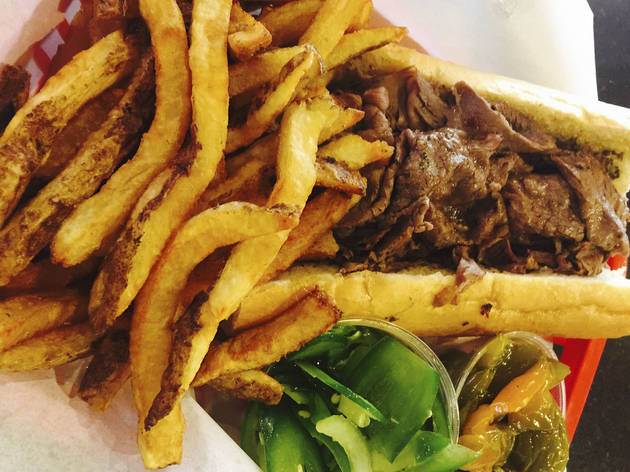 It’s only been dishing out sandwiches since 2012, but this Hillside spot is actually a reincarnation of a stand that once ruled the Italian beef scene in Little Village. The beef sandwiches here could be described as matter-of-fact but satisfying: Shreds of lean beef are folded into fresh Gonnella rolls soft with a clear, mildly salty jus that doesn’t fuss around much with herbs and spices. The one point of intrigue is the unusual house giardiniera, a mix of razor-thin celery and jalapeño slices that contributes a briny, vegetal note (and surprisingly, only a hint of heat). If you need a little extra incentive to journey out to the ‘burbs, here’s a good one: Chickie’s also serves cannoli milkshakes. 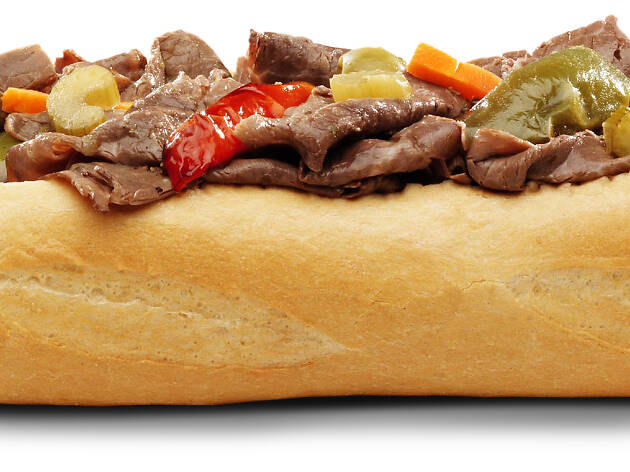 With a whopping 21 locations, it's all too easy to dismiss Buona as a chain—but that'd be a mistake. The family-run, Chicago-born operation is steeped in rich history: As the story goes, Joe Buonavolanto Senior (nephew of Mr. Beef's Carl Buonavolanto) took out a second mortgage on his home to make his meaty dreams a reality. Buona's beef recipe, which hasn't been touched in 30 years, was dreamed up by Joe's wife, Peggy, and has been passed down through generations of Buonavolantos. The meat here is perfectly seasoned and topped with char-kissed green peppers before it's stuffed into a crusty bun and dunked in jus. You drooling yet? 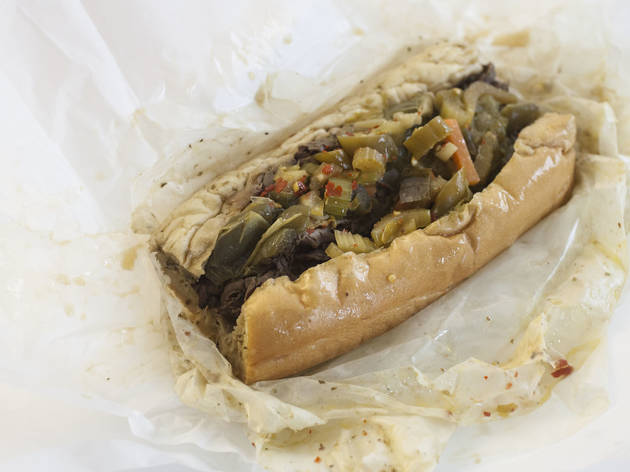 Finding a good Italian beef in the Loop isn’t as easy as one might think. Sure, there’s an Al’s Beef at Wabash and Jackson, but if you’re on the other side of the neighborhood Luke’s is your best bet. The place has the feel of an old school Chicago grease joint, and its beefs have all of the essentials that could satisfy a newbie tourist and a seasoned Chicagoan alike. The gravy is just salty enough, the bun maintains its structural integrity even while sopping wet and at $4.65, it’s incredibly affordable. 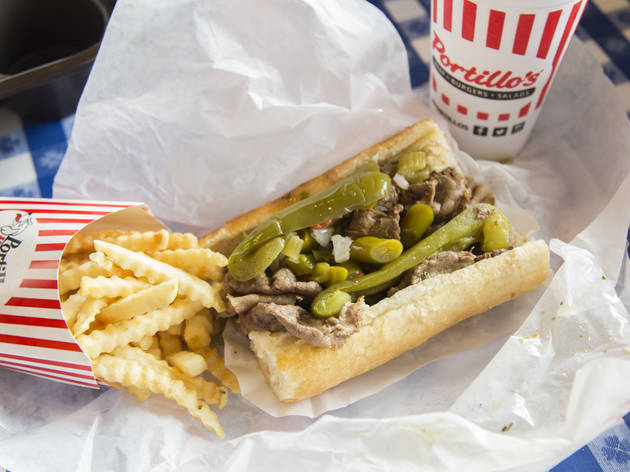 Dick Portillo sold his namesake hot dog chain in 2014, and since then Portillo’s aficionados have questioned the quality of the food under the new management. Even so, we’d be remiss to leave the chain’s Italian beefs off of our list. A dipped beef from Portillo’s is a thing of beauty, and is capable of bringing a tear to the eye of any Chicagoan who loves a good wet sandwich. Order a side of their signature crinkle-cut fries, and you’ll find yourself in a greasy rapture that’s been 50 years in the making.