Harry Shum Jr. was born in Costa Rica to Chinese parents making a new life for themselves,
only for the whole family to migrate to Los Angeles when he was only six years old. Shum
sheepishly admits his Cantonese could be better but it’s good enough for him to fall in love with movies by Stephen Chow, Jacky Chan and Chow Yun Fat – there’s no denying that Shum is as third state as anyone could get. Known for a while as the ‘other Asian’ on Fox Network’s hit TV show Glee, he was given a major storyline in the third season episode titled Asian F, where it depicts the struggle between an Asian student and his parents who want him to pursue academia rather than the arts. Upbeat and optimistic, the Step Up 2 actor didn’t have it as hard as Mike Chang, the character he portrayed in Glee. “[My parents] didn’t oppose my choice to be a dancer per se, rather, they would throw a lot of options my way, like telling me so and so has become a clerk or something. That’s always a parent’s concern; whether their child could make a living. My parents presented me with the reality of my career choice and that there are limited roles for Asians in Hollywood, but they never disapproved. My mum is a painter and never pursued that talent, I think that played a part in their attitude towards me.”

While many Asian actors have been speaking up about whitewashing of Asian roles in
Hollywood and are understandably frustrated about the issue, Shum, on the other hand, decides to take a more positive perspective on the situation. When asked about challenges he faced as an Asian dancer his response was that when he finds himself in such a situation he would ask himself “How can I use this to my advantage and turn the negatives into positives?” instead. “Once my roommate said I should go to an audition at Black Entertainment Television with him,” Shum recounts. “I was a bit apprehensive at first because they were looking for tall, well-built dancers and you know, I’m shorter and scrawnier than what they’re looking for. When I showed up I was the only Asian there, but after the audition I got a callback and was booked. I think it’s about putting yourself out there and showing the people behind the casting couch your skills and giving them the opportunity to see things in a different way.”

Shum’s current role as Magnus Bane in the Shadowhunters TV series certainly breaks a lot of moulds. A show based on the Mortal Instruments book series, Bane is a flamboyant, bisexual, immortal warlock who develops a relationship with shadowhunter Alec Lightwood, played by Matthew Daddario. “I’m so fortunate to play Magnus.” The Crouching Tiger Hidden Dragon 2 actor says. “He’s such an interesting character with a lot history because of his age.” The relationship, dubbed ‘Malec’ is one of the most popular pairings in the book series with high expectations from many die-hard fans. In the first season, the couple also shared rare on screen kiss, which broke racial and sexual boundaries on the silver screen, an event that had many fans absolutely giddy – if Youtube reaction videos are anything to go by.

Asian actors have been making some headway on the small screen, with Steven Yuen playing badass zombie fighter Glenn Rhee in The Walking Dead and Daniel Henney is to join the cast of CBS’ Criminal Minds this year. While these characters alongside Shum’s portrayal of Bane are heralded as the first winds of change, it seems movie producers still have to catch up. Often cast as asexual tech nerds and regulated to play their Asian roles with an accent, the plight of Asian male actors in Hollywood are crescendoing louder with every controversial casting. Shum feels that if change is to come, it should also be a collective effort.

“A conversation needs to be had in the industry, but it’s also about coming up with a solution. A lot of actors are happy to land the job and stay quiet to keep it. It’s not easy, but for the ones of us who can, we have to insist on delivering our best work and voice out when something doesn’t feel right.” Ever the optimist, he says, “If you mindfully represent then you’re doing good work, the industry will take notice and things will change.”

As one of the prominent Asian actors in the game, what would the solution look like to him?
According to Shum, it all starts with self awareness. “Authenticity is always the debate but what is authentic? We have to keep in mind the culture’s already mixed. I’m Costa Rican-born Chinese, grew up in LA and my best man is African American. All I want is to see more stories that make sense.” 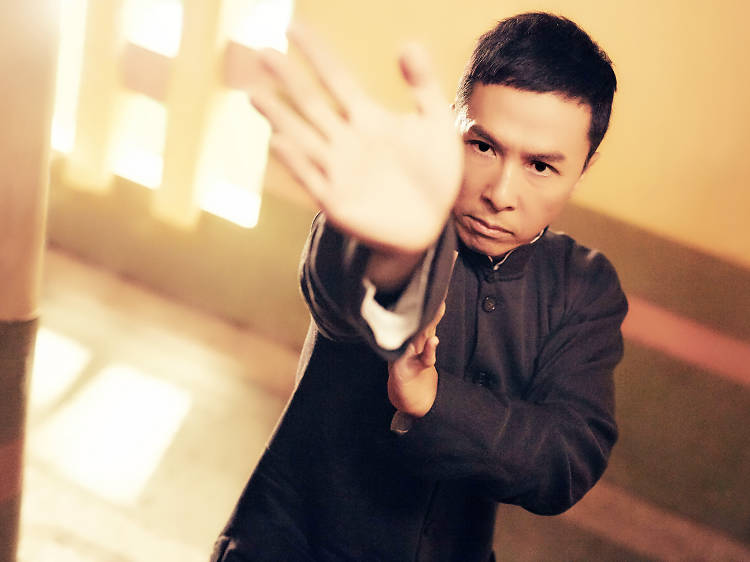 Donnie Yen talks to Time Out Hong Kong about Ip Man 3 and Rogue One.