Kowloon City is home to arguably some of the best Thai restaurants in Hong Kong, thanks to its large population of residents from the Southeast Asian country. We often head here for the deliciously authentic Thai fare on offer, however, for this review, we're off to check out a new Japanese restaurant that's been receiving plenty of praise – Keyaki Group's latest offering, Sakaya.

Upscale Japanese eateries are pretty rare in Kowloon City, meaning the Keyaki guys may be tapping into a niche with this move into Lion Rock Road. Okay, there's Wasabi up the street, offering a little bit of everything, and ramen joint Hamataki not too far away, but there's nothing with the izakaya vibe that Japanese grill and sake bar Sakaya offers. On top of this, Keyaki may have some solid outposts on Hong Kong Island, including top Japanese whisky bar Nocturne and superb sushi restaurant Akari, plus new izakaya Shiba East in Shau Kei Wan, but a much-anticipated foray into Kowloon City creates its own fanfare.

The izakaya atmosphere at Sakaya is apparent as soon as we enter. We're greeted by blaring J-pop, a long counter covered in Japanese beer and sake labels and retro movie posters on the walls. There's table seating, as well as stools along the counter facing the open kitchen, so we pull up a pew opposite the grill to watch the action. The menu features a range of grilled meat, seafood and vegetable skewers, as well as a few more items outside the things-on-sticks realm. We start with the octopus tartare with wasabi sauce ($33), which doesn't appear to be carefully chopped – the octopus chunks come in all shapes and sizes. Luckily, the wasabi sauce provides a rounded flavour without too much of a nasal burn. Our next item is the crab meat with miso ($128), which is presented neatly inside its shell with a raw egg on top and comes with a side of garlic toast. We mix the egg into the meat, allowing it to firm up from the shell's heat, and spoon it on our toast. The flesh is tasty and fresh but the miso is barely detectable. The garlic on the toast helps elevate the crab but we yearn
for more seasoning. 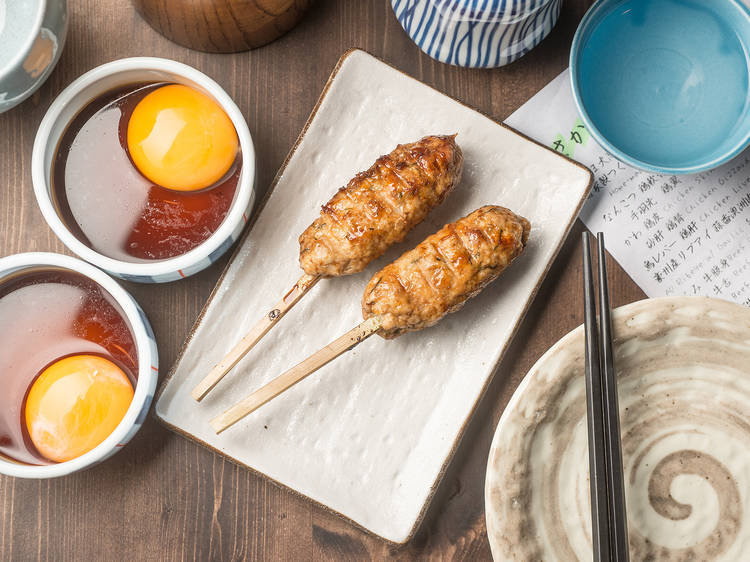 Next up is the minced chicken skewer ($32) and the minced pork with Sakura shrimp skewer ($30). Both arrive with a raw egg yolk and soy sauce dip, which is sweet and works well with the chook. It is a tasty dish but, sadly, again it lacks seasoning. The pork and shrimp is too fishy but the sweet soy cuts through and makes for a decent stick once combined.

Looking for something a bit heartier, we order the beef tongue ($58), which comes with a garlic and mustard seed dip. The meat is well cooked, with a satisfyingly bouncy consistency and a pleasingly oily taste without any grease. It's cut into bite-sized chunks, making it easier to dip it into the addictive sauce, which pairs perfectly. We also order the duck meat and aubergine ($118) and asparagus ($28). The thick cut of aubergine is topped with minced duck and bonito flakes. It's smoky and grilled to perfection but the meat could be pork for all we know as there's no discernible gamey taste. It's satisfying nonetheless. The flakes add some welcome depth but the side of raw ginger is a little too pungent for this dish. The asparagus spears are nicely charred, though, with a rich flavour. 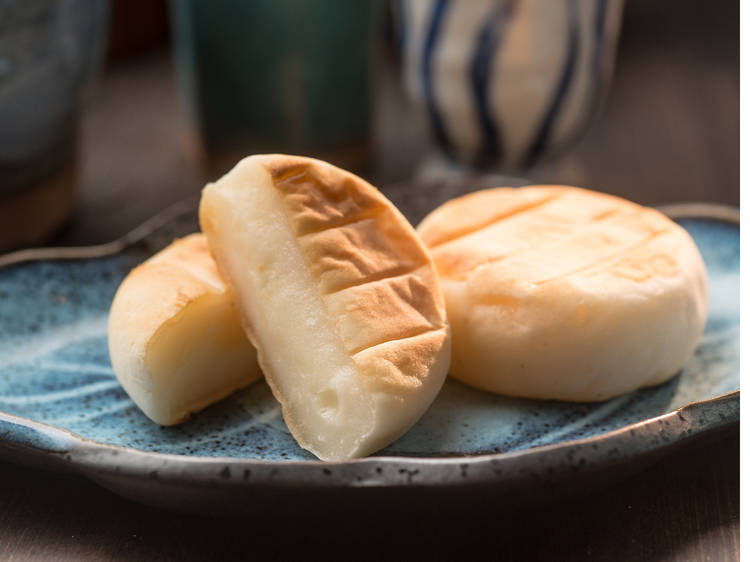 We're glad our cheese rice cakes ($28) come last because they're overly sweet but nevertheless manage to round the meal out with aplomb. More like hot balls of cheesecake with thin, bread-like casing, expect a sugar rush from these beauties.

Overall, Sakaya isn't Earth-shattering but there's great potential for this eatery to be the best Japanese in Kowloon City. We love the izakaya feel and the food is decent. However, we don't appreciate it when chefs skimp on seasoning in dishes. We do hope, though, that Sakaya picks up its dressing soon and makes a few key changes to the grub so that the next time we're in KC, we don't just stick to those fab Thai restaurants.