40 fun things to do in London this weekend

Thinking of having a quiet weekend in? Think again! London's brimming with too many ace events, parties and pop-ups for you to stay at home. Achieve killer brows on board Benefit's beauty boat, scoop yourself some free ice cream at La Gelateria's new branch and finish off the week with the Mister Sunday crew who are hosting the perfect Sunday session. Have a blast with our tips below.

Peckham Flea Market, Peckham Pelican, Sat, free. Find a handful of vintage traders pitching up in Peckham with clothing, homeware, jewellery and books available to buy alongside new fashion pieces and food and drink from the bar.

Rhythm Junction London, The Tabernacle, Sat, £15 adv. Get your curlers in and your brogues polished for this vintage evening of high spirits and great music returning in 2016. Swing and jive bands will fill the Tabernacle with tunes from the archives, be it the hot jazz of the twenties, big band swing from the thirties and forties or jump jive of the fifties.

Chop With A Beet, Borough Market, Sun, free. Transform grub destined for landfill at this communal cook-along soundtracked by DJs in Borough Market. Attendees will work together to chop, sizzle and stir up a fine soup using leftovers from the market while learning more about how to reduce food waste.

The Bluestocking Club, Waterstones Tottenham Court Road, Sun, £6.47. This brand new literary film club launches with a screening of the 1967 cult classic Valley of the Dolls.

In the Loop Workshop, Jewish Museum, Sun, £10. Shirt feeling a bit naked? Fashion designer and pattern cutter Laura Jones will lead a workshop into the history of the necktie and assist you in making your very own tie, be it skinny, regular or 70s kipper-style.

Ceramic Art London, Central Saint Martins, all weekend, £15, £12 concs. Now in its twelfth year, this showcase for contemporary ceramicists will feature over 80 artists from all over the globe.

ATP Exhibition & Sale, ATP Pop Up Venue Stoke Newington, all weekend, free. In the run-up to their upcoming festivals, ATP host this pop-up weekend party with drinks in their beer garden, grub from Big Apple Hot Dogs and vintage merch and limited edition prints for sale.

Free Gelato from La Gelateria, La Gelateria Stratford, Sat, free. To celebrate the opening of their new venue, La Gelateria are giving away free gelato. No, we are not making it up.

Spring City Cheese Walk, Leadenhall, Sat, £35. A cheese inspired tour of the City followed by a cheese and wine tasting sessions and a queso-themed quiz.

Wandsworth Common Beer Festival, Le Gothique, all weekend, £5, £1 CAMRA. Annual festival featuring 150 beers from across Britain, as well as wine and cider. In its eighth year, the festival is still child and dog-friendly, and still does lovely festival grub for between beers. 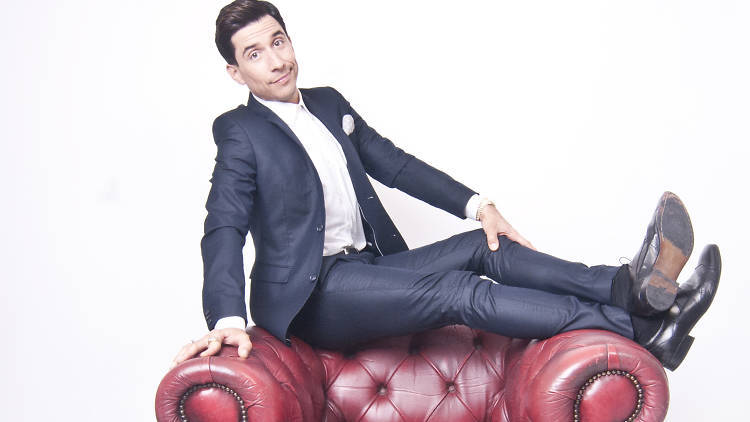 Bush Hall presents..., Bush Hall, TONIGHT. Every so often the Show and Tell team take over this beautiful music venue in Shepherd’s Bush with intelligent, all-headline bills featuring some of the most erudite comics in the land. Tonight's line-up: Reginald D Hunter, Liam Williams, Andrew Maxwell and a special guest.

Russell Kane: Right Man, Wrong Age, Leicester Square Theatre, Fri-Sat, £15. Russell's on top form at the moment – his trademark puppyish energy is still intact but toned down a little, and it now comes with a new-found relaxed confidence.

Ibibio Sound Machine, Hootananny, TONIGHT, £4, free before 10pm. This international eight-piece collective from London, led by the charismatic Eno Williams, whip up a storm of afrobeat, funk and disco.

Tiga Non Stop, XOYO, Sat, adv £13.50. After stonking residencies by Eats Everything, Skream, The 2 Bears and others, XOYO has bagged dapper Canadian disco king Tiga as its latest 12-week headliner.

Savage, Metropolis, Sat, £5. Those restless polysexual party animals Sink The Pink are at it again. Their latest venture is a weekly disco bash at strip club-cum-club space Metropolis, where you can roam around three floors of filthy fun for only a fiver.

Archive Video: ‘American Movie’, Birkbeck Cinema, TONIGHT, £8. This new film club sets out its stall in style with a rare screening of one of the best ever films about film, and a key text in American documentary cinema.

A Night with Apichatpong Weerasethakul, Tate Modern, Sat, £15. You may not be able to pronounce his name, but don’t miss this opportunity to immerse yourself in the unique world of one of the most idiosyncratic filmmakers working today.

Midnight Special ★★★★☆ Michael Shannon is a dad who kidnaps his son from a cult in an intriguing sci-fi with echoes of Spielberg.

Dheepan ★★★★☆ Jacques Audiard's Palme d'Or-winning 'Dheepan' is the story of a Sri Lankan man, woman and child who masquerade as a family to escape to France from the aftermath of their country's civil war.

Hardcore Henry ★★★★★ You become the action hero in this adventurous, violent, giddy-making triumph, all shot from the hero's perspective.

Sunset Boulevard, London Coliseum, Fri-Sat, £12- £105. Glenn Close is superb – if a little on the old side – as a fading screen goddess in Andrew Lloyd Webber's ho-hum musical.

Helen A© Natalie Keyssar 2012: Encounters, TJ Boulting, Fri-Sat, free. Since graduating from the RCA Painting course in 2011, this South African artist has gone on to make sculptural and installation work. This new show features projectors and prisms that combine to create a play of light across walls and objects.

Win... one of three family weekend tickets to Camp Bestival 2016 or a three night stay at a boutique inn in the Cotswolds

Grab... a mani and/or pedi at Singhar Beauty West End on Oxford Street - up to 65% off

Is the Loch Ness Monster on the loose in the Thames?

Buzzing! It's your favourite espresso martinis in London

Six dating apps for Londoners that make a change from Tinder