Meet the Melbourne queens of 'RuPaul’s Drag Race Down Under'

Start your engines, cobber! After years of rumours and speculation, RuPaul's Drag Race – the unstoppable and multi Emmy-winning reality TV show that has taken the world by storm – is finally coming Down Under. A pair of Melbourne's finest queens are joining the cast along with performers from around Australia and New Zealand.

We're getting revved up for RuPaul's Drag Race Down Under by catching up with the local stars as they give us the goss and spill the tea on where you should be seeing drag around Melbourne and Victoria.

RuPaul's Drag Race Down Under is streaming on Stan from Saturday, May 1, 2021.

See drag queens in the flesh at the best gay bars in Melbourne. 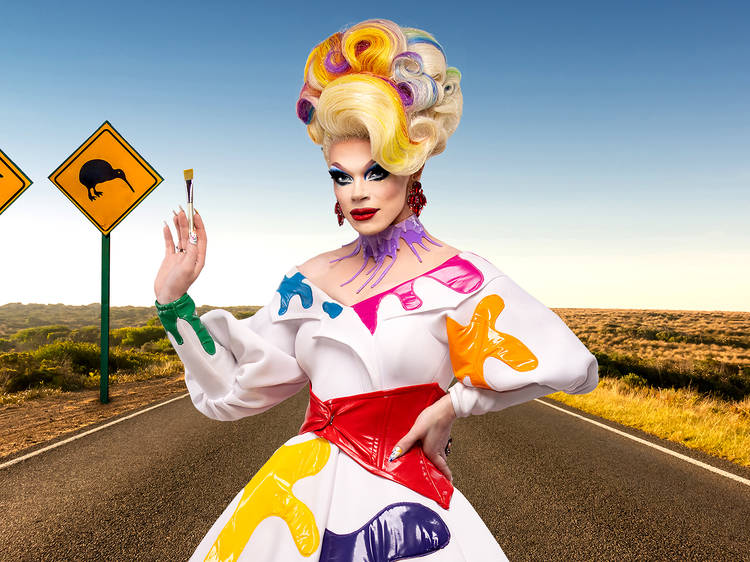 With a decade in heels under her belt, this superstar Melbourne drag queen is known for racking up the likes with her amazing makeup illusions and dominating any stage she steps on with equal parts comedy and glamour. She has appeared all over Australian media, notably in that AAMI TV advertisement that had us all quoting “Hold on to your boa, babe!” Last year, when Drag Race Down Under was still a twinkle in Ru’s eye, she starred in the online series Highway to Heel from the same production company behind the Drag Race franchise.

How did you get into drag?

I came up through the makeup world, then I kind of fell into drag. I was really into horror movies and zombies and Rocky Horror and vampires – and then I found out it was a bit more fun to chuck on some lipstick and an eyelash and some glitter.

What is the most fierce thing you’ve done in drag?

Honestly, the most exciting thing that I ever get to do is whenever I get to bring drag into the mainstream. Whenever my head gets to pop up in people's televisions or on their radio, that extra bit of visibility is always the most exciting thing. [For example] I was in the AAMI insurance campaign for Broken Heel Festival on television for many years, I was on The Bachelor, I was the cover girl for Bonds, and I launched a palette with Benefit Cosmetics last Mardi Gras.

What are you excited for people to see on RuPaul’s Drag Race Down Under?

I’m really excited that people are gonna see me! I’m also excited for them to meet Rhy Nicholson. I think the world is going to fall in love with Rhys as our guest judge – he’s incredible, funny, entertaining and very supportive.

Who are the local queens you think people should be watching?

Definitely check out Philmah Bocks, one of the festival directors of Broken Heel. Maude Boat, if you've ever seen a foam wig or foam headpiece, she invented them. Paris is probably the biggest Melbourne legend in terms of drag, she is just the one, the only, the icon.

Where do you think people should be going to see drag?

Of course the Broken Heel Festival [Art is a glambassador for the regional drag event], that's a bucket list occasion right there! I also work really closely with a venue called Piano Bar, which is actually a franchise of venues now, and we bring drag to regional places around Victoria and Australia – like Ballarat, Bendigo, Colac and Geelong. 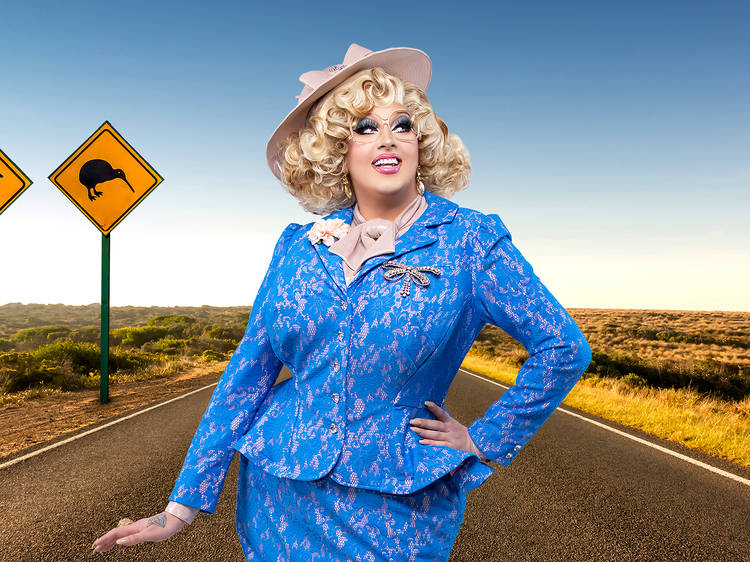 This hard-working businesswoman is a nine-to-five icon who, between sending off faxes and taking calls on her car phone, has already firmly embedded herself in the fanfare around Drag Race in Australia, with famous queens like Trixie Mattel and Katya Zamolodchikova referring to her as one of the best drag names of all time. Ms Finance is eight years into the game, but the character actually came before the drag, based off a dress bought in an op shop. One of her goals is to “realign the name Karen with a positive attitude”.

Can you tell me about your illegal Drag Race screening parties back in the day?

It was around season five or season six. The only way you could watch Drag Race in Australia is on Foxtel, which was six weeks delayed. So I used to torrent the episodes and invite people over to the house and we would screen them on a projector in my backyard. And they eventually got so big that by the finale of season six, I rented out a function room at the Irish pub down the road, and we had hundreds of people come in. Eventually, I think it was actually midway through season eight, Foxtel got wind of my illegal screening parties and sent me a cease and desist. I fought it online with an open letter to Foxtel and ended up pledging my case and winning. From there Drag Race switched to Stan for All Stars 2, and fast-tracked it so we got it at the same time as America.

How did you make your case to Foxtel?

The focus of my argument was actually on the community. Of course it was so fabulous watching the show, we loved the show – but back then it aired on Tuesday, and our local underground queer community could get together mid-week. It was a really great excuse for us to make space and commune with each other. It was something away from the hustle and bustle of the weekend. I used to set a costume theme and we’d all get into drag. It was really a great networking place as well – lots of people that I met through doing the screening parties are all performance artists of some kind now, and most of us travel the world together [Karen is a cast member of internationally touring cult queer cabaret Yummy].

How did you become the go-to host when the American Drag Race stars tour Australia?

The touring company that hosts the Rugirls, they needed a new host for their events. They were looking for someone that was interested in the show, that knew a lot about it, and that was good on a mic – and they came across my little underground viewing parties and the community we’d built. I’ve just stuck with the company ever since, I've been touring since season seven, and now we're now up to season 13.

Has working with American queens who have been on the show prepared you for what you’d be in for?

Sharon Needles, the winner of season four, was one of the first people to text me when the cast announcement came out. She said, “Of the decade touring with girls that have come before, did any of their advice prepare you for the show?” And I said “Absolutely none of it. Nothing that you ever thought that you knew about Drag Race came in handy. Everything was out the window when we walked into that werkroom and it was just every diva for themselves.”

I’ve met Ru once before at DragCon in the US, but to actually work with her for the first time – she was surreal, and ethereal, and an absolute professional. On the first day when she walked in, if you had told me that it was a hologram and it wasn't the real thing, I would have believed you.

What is the most fierce thing you’ve done in drag?

My favourite thing I've ever done was perform at the last marriage equality rally that we held in Victoria before the plebiscite. There was something like 20,000 people at the State Library and I performed the song 'Fuck You' by Lily Allen, directed towards the government for putting us through it, and had the entirety of Melbourne singing along with their fingers in the air, it was pretty cool.

Where do you think people should be going to see drag in Melbourne?

The hot spot at the moment is Rainbow House Club. A brand-new bar, they are booking such a diverse range of performers that really highlights all aspects of the drag community. The other top picks would be Molly’s Bar and Diner and the 86. 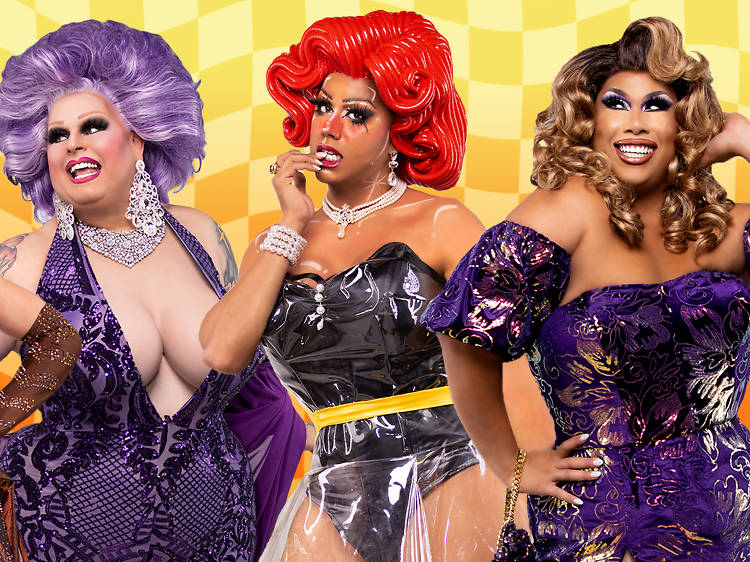 From across the border comes another crop of Aussie queens coming to the tele.

Lip synch for your life (or just party) afterwards 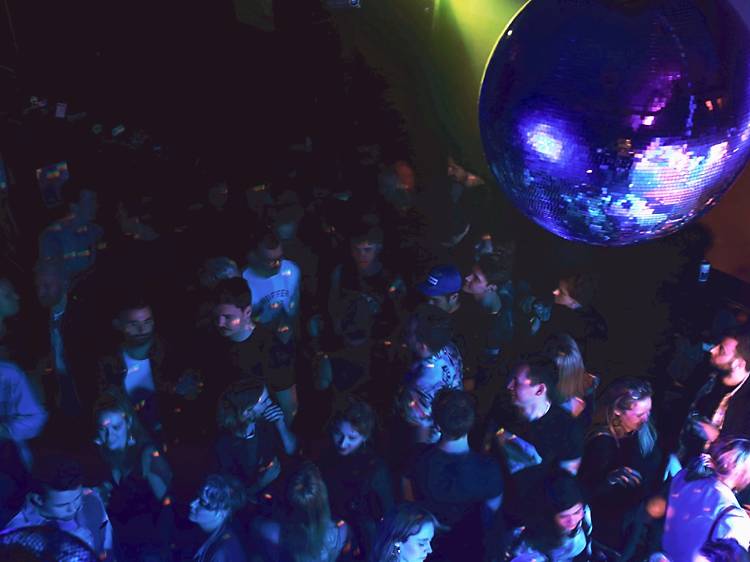 The best queer parties in Melbourne

Looking for somewhere to dance the night away with your LGBTQIA+ community? We danced till dawn at clubs all over the city (it's a rough life, we know) to find out the best places to put on your boogie shoes.